Through the Fourth Wall With Ultra ADHD

Stumbling the halls of itch.io via its randomiser feature is rarely anything short of a treat. When it gobs out a game with a blurb like that of Ultra ADHD it almost feels like you’ve stumbled on one of the many veins of uniqueness that run to the core of the site’s selections.

Ultra ADHD is a game that breaks the fourth wall from the first minute, and continues to exist as a self-aware, cultural-reference spouting quirk from that point right up until the curtain falls on each of it’s three endings. It’s a short journey, and as you’ve likely gathered, a strange one, but it’s one that I highly recommend, even if it’s trailer only gives a slice of the game’s earliest moments.

Originally the project started as a dark, ruin-filled horror game that saw you passing judgement on behalf of a divine being. The game was set to be rife with haunting symbols, terrifying environments, and a tangled mass of cascading moral choices. “Everyone Dies at the End” –as developer Alon Karmi explains on his blog[Spoilers!], or in the developer diary [Spoilers!]- never came to be, with the early parts of the game being repurposed into the core of the main area of Ultra ADHD.

It all starts with a ringing phone sitting on the shelf of a phone-booth, probably one of the most normal things the starting area has to offer you; a leering, floating eye hovering in the sky, the game’s peculiar 2D-objects-in-3D-world art style, and the strange, brain-shaped trees that litter the landscape. 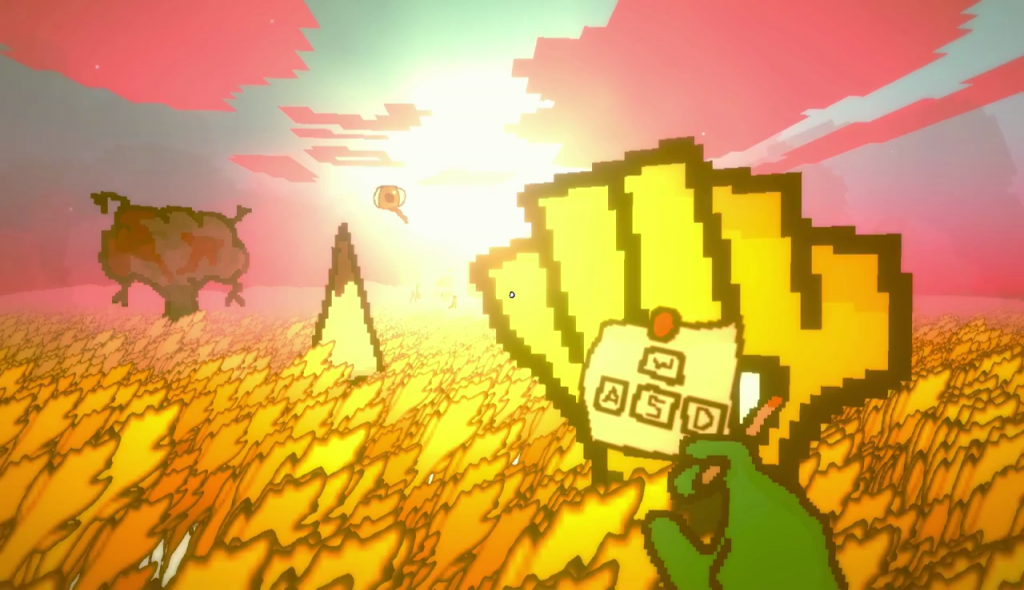 Picking up that phone however quickly sets out a few rules for your next 20-30 minutes of game. Your character -much like many game protagonists- is as mute as a post, and seen by most as a tool to be used for their own ends. As a matter of fact, your two handlers, Motherland and Fatherland, are more than aware of their own fates as game characters, and immediately set you on a path of chaos masquerading as freedom-fighting.

Your handlers are with you throughout your brief adventure, leaving hints pinned to objects, contacting you via electronic means, and even meeting you in person. Fatherland is a typical mission giver, attempting to remain professional -although occasionally slipping- despite the madness going on around, he’s the straight-man of the two, with Motherland slamming out culture references, smack-downs, and pithy one-liners.

While Motherland serves as a handler in the game, the inspiration for the character originated in another medium. “Motherland,” as Alon explained to me “was actually a character in a tabletop RPG I GM’d. She was an attempt at making a self-aware villain who was knee-deep in pop culture knowledge.”

While the game is, most certainly, laced with references, I’m surprised how many I missed and accepted as simply lines in the surprisingly text heavy sections of the game. With smaller projects, or small team projects you normally get a degree of inside-jokes or references to other titles that feel abrupt and rash; Ultra ADHD manages to -somehow- avoid this, to the credit of the developer.

I can’t say much else about the game without spoiling it’s twists, however it does manage to pack a few twists into its short running time, and it’s nigh impossible to put the game down until you finish it — in fact I did all three endings in one sitting.

Ultra ADHD (Amazing Death and Huge Destruction) is currently available over on Itch.io, you can find it [here]