Much like the titular blaze, which increases in destructive potential at an alarming rate as the game progresses, the quality of tabletop games has been multiplying at an exponential rate in recent years. New systems are constantly emerging even as old mechanics are refined and reformed to be faster and more interesting to play with. Fire in the Library is a game that takes a relatively simple push-your-luck mechanic and throws just enough modern gaming magic at it to transform it into something wonderful. Let me explain.

Fire in the Library is a game for one to six players, pitching them in the competitive roles of librarians who rush repeatedly into their beloved, burning library in an attempt to rescue as much knowledge as they can. There are four different sections to the library, each of which scores a varying number of points depending on how damaged it is. Depending on turn order, entering the library is either more risky (and therefore more valuable) or less risky (and therefore less likely to score as high). 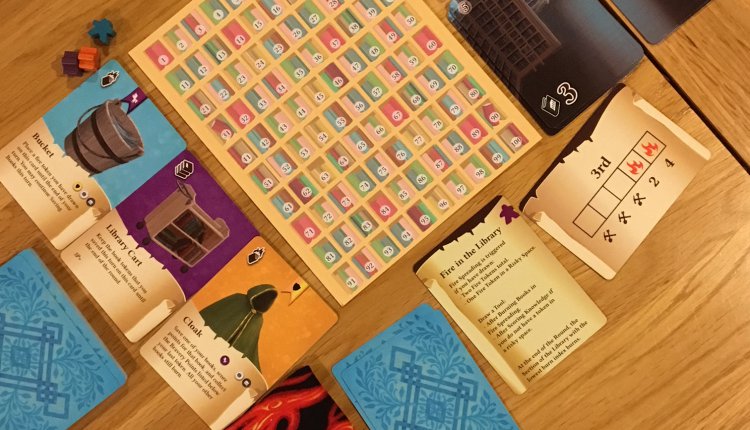 This theme is delivered without a single written word shown on any component — and yet it runs through every facet of the gameplay with absolute clarity. The first turn order is decided at random, but from that turn forwards, the player with the lowest score chooses, then the second lowest and so on through to the lead player, who has no choice (except in a two-player game). Player order is important because each of the player order cards has a number of risky spots and a number of safe ones. Risky spots show a value beneath them, whilst safe ones show a tool.

On his or her turn, a player reaches into a (lovely) flame-embossed bag and draws a single cube. It is then placed into the next empty slot on the player order card — the first slot is always safe. If it’s a red cube, it’s a fire token — draw another one (whether on a safe spot or not) and your librarian is beaten back by the flames. If the cube is any other colour, then it’s a book, which will score points if you manage to extract it safely from the library. 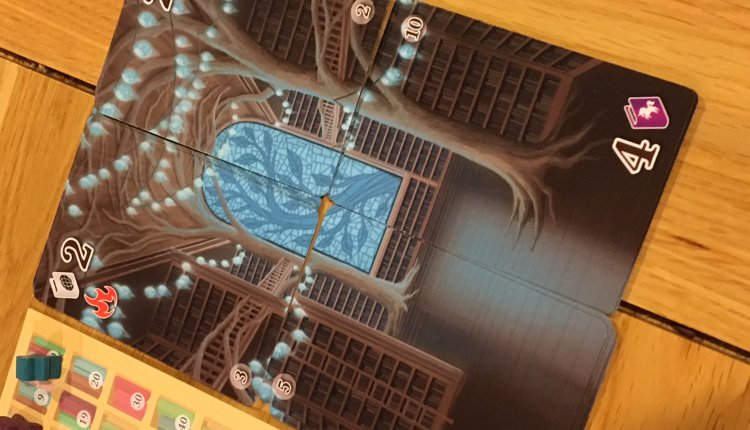 The active player can draw up to five cubes in this way, but as I mentioned earlier, if two red cubes are drawn then the blaze intensifies. If a single red cube is drawn on a risky space, the same thing happens. Drawing additional cubes as you move into riskier spaces yields additional bravery points (as shown below the spaces) which can be a very lucrative practice indeed, especially if you have more than one of the many tools that can either absorb a fire cube, sort one or otherwise mitigate a bad draw somehow.

Whilst each player begins the game with two randomly dealt tools, there are only two ways to get more: by exiting the library with one or more cubes in safe spaces on their player card (these spaces show tool symbols below, rather than bravery points) or by causing the blaze to intensify. There are three kinds of tools: those played before a round, those played whilst in the library and those played during scoring. While I can’t say that all tools are created equal, they do all have their uses, offering different kinds of players the opportunity to play as they want. 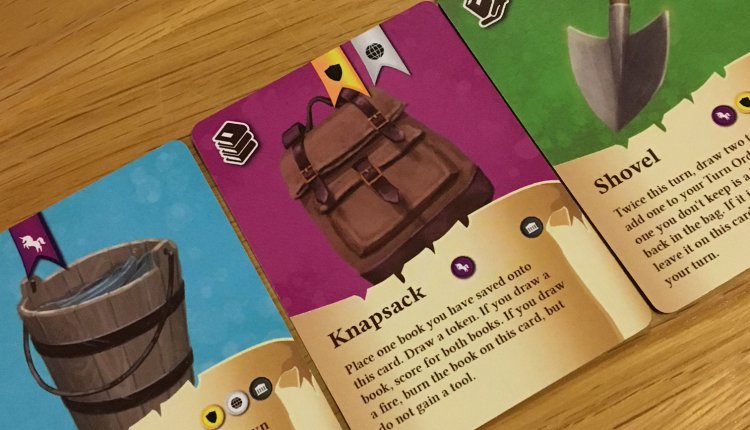 Having spoken a lot about the blaze intensifying, I realise I should talk about the two ways in which it can happen. Firstly, a player who overextends themselves and draws a second fire cube (or a single one on a risky space of their player order card) makes the fire rage. When this happens, all books rescued that turn are discarded (without scoring) and the section of the library that represents the last colour of book to be drawn from the bag burns.

This forces the players to discard a card from the library montage, which is made up of four stacks of cards positioned to make a picture. After each round of turns (one visit into the library for each player) a section of the library burns no matter what else has happened, with the burning section chosen based on the lowest number shown among the current set of cards. If a red blaze symbol is shown on the revealed card beneath it, another red cube is added to the bag. Whenever one stack of cards in the library image is completely burned, the library collapses and the game is over. 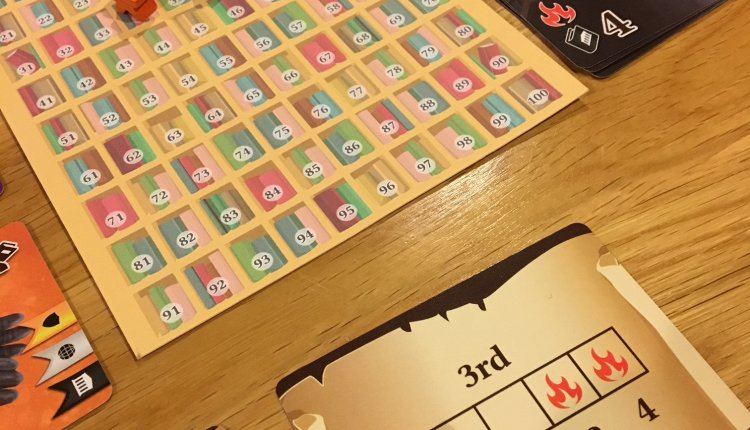 The player who has the most points for rescued books, bravery and from any other method (some tools allow additional endgame scoring) is the winner. Each game of Fire in the Library lasts around thirty minutes and is incredibly intuitive and very fluid to play, with minimal downtime and lots of camaraderie despite the competitive nature of the game. Whilst there is no cooperative scoring, there is an element of shared responsibility for the library which lends the game an extra dynamic that I quite enjoyed.

In general, games of Fire in the Library played between players of a similar level of experience remain extremely competitive, with only subtle differences in willingness to take risk making the difference for better or worse. A leader is rarely more than a single turn of scoring ahead of the pack and the fact that lower-placed players select the order of play can make all the difference — especially if the library is near collapse when someone decides to push their luck that little bit too far. 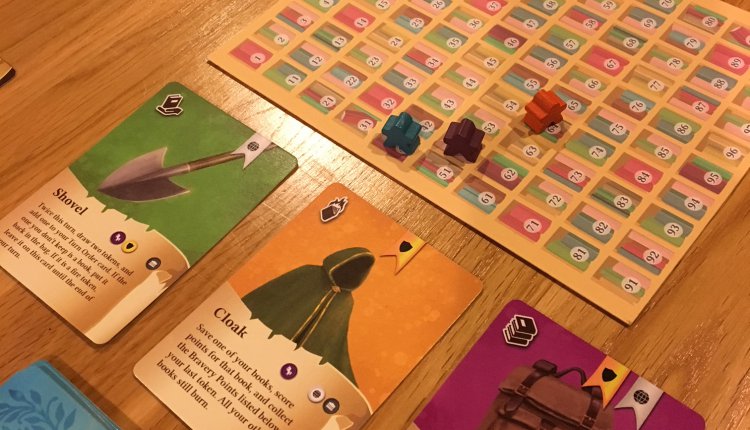 Fire in the Library offers a fantastic mix of pushing your luck, tactical decision making and fun. It provides a hugely entertaining package given its small-box form and straightforward components, but it is so much more than the sum of its parts. It plays quickly, is as easy as anything to teach and (based on my prototype, at least) you can take it anywhere. It scales exceptionally well for player count and even includes a smart, AI-driven, single-player mode which is quite a lot more interesting than you might expect it to be.

I can’t wait to see what Weird Giraffe Games intends to offer when the Kickstarter goes live. The love and care that has already been implanted into the game is evident and the component quality is excellent, even at this early stage. Fire in the Library is most definitely a game to watch. Come March the 19th when the Kickstarter launches, I think you could do much worse things with your hard-earned cash. 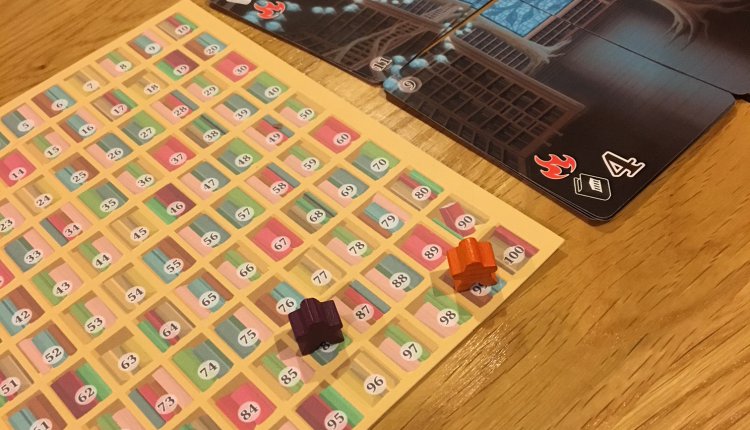 If you’d like to back Fire in the Library, you can do so by following this Kickstarter from March the 19th.