As I mentioned in the previous Minecraft March entry, I have a habit of starting up new worlds every couple of months, dabbling about for a week and promptly abandoning them. With that in mind, it’s time to take a look at another old world.

More Old Worlds
It starts in a mossy dungeon. I have a good idea of what this world is about and I’m immediately aware that — if this is the world I assume it is — then it is nothing more than a centrepiece to an idea. An idea which would stick with me from that point onward.

Reaching the basement, it hits me. This is the implemented fortress. The fortress is slightly fleshed out, in that it has sections of mossy wall as opposed to vanilla cobblestone. The staircases are placed on opposite walls and there are torches in each room. While it’s not exactly fancy set dressing, its minimalism adds to the setting.

Opening a trapdoor, I see that there is a cavern below, single glowstone cubes marking out a path. As I follow it, I find that it leads to a monster spawner. I make my way back up, noticing a makeshift staircase, and memories of the concept emerge. The idea was to start in the spawner room, then escape the fortress or use it as a base. 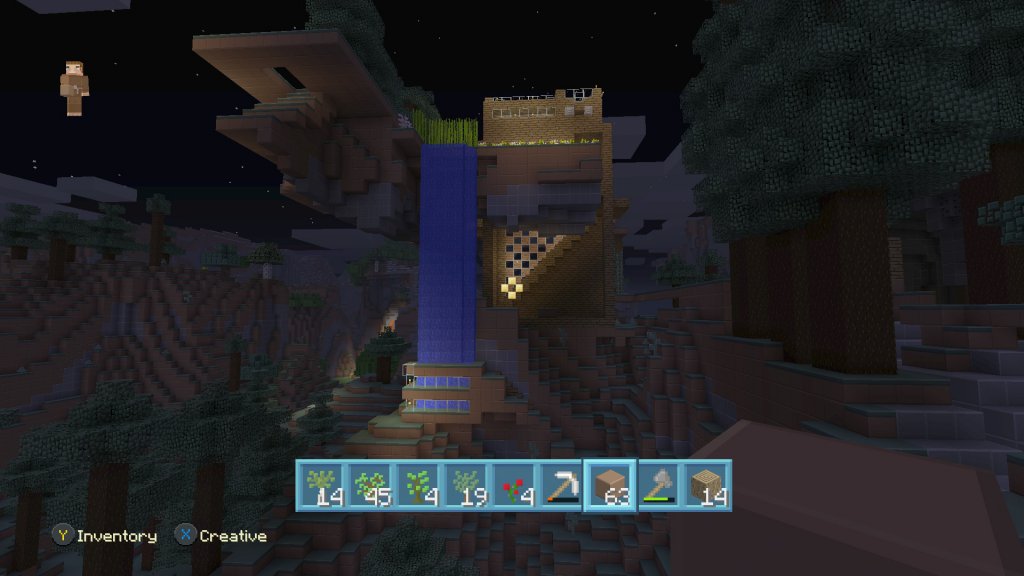 Upon returning to the basement, my memory is validated by relatively well-stocked chests. Going out the door, I’m reminded of the real reason this world was key. It’s the point when I realised placing saplings together can create makeshift walls and using bonemeal can exacerbate the growth in ways that shouldn’t be possible — an example being a thirty wide by twenty deep area made solely of jungle trees.

Reaching the top floor and noticing the green, stained-glass roof immediately dates the map. I fly out and, as expected, it’s the only thing on the map. It’s a solitary starting place, one which was never actually used for its original purpose: a series of themed dungeons like those in the Zelda series.

I load up the next save. 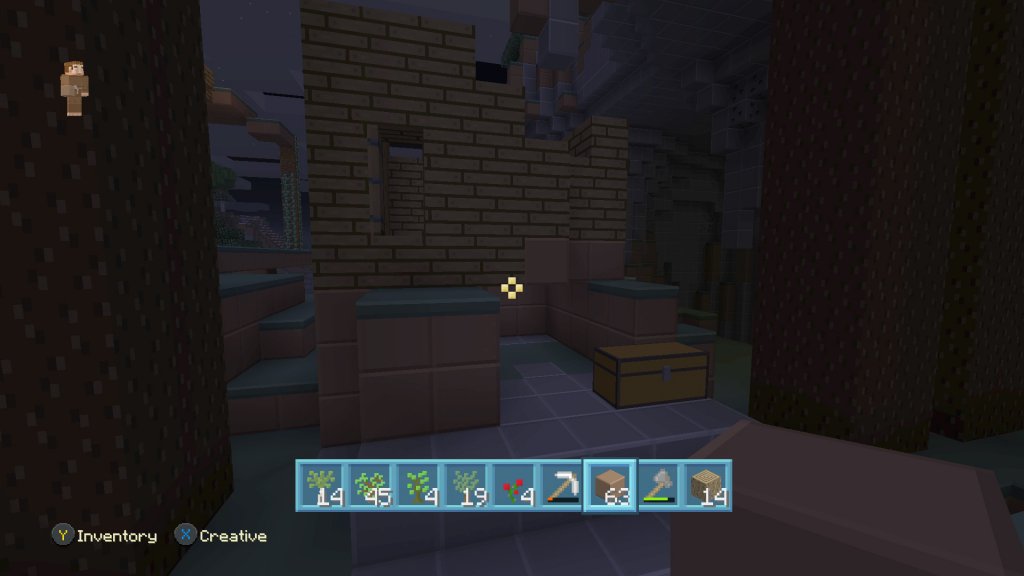 The world that follows is one of my favourite builds. It’s the point when abandoned structures and remnants of old began to get implemented, when waterfalls started getting used as elevators. I think I might have actually built things other than the floating base and the overgrown, ruined building.

I’ve had a fascination with flying land masses since playing the original Sonic the Hedgehog on the Master System. There’s something about the idea of a disconnected landmass that is inherently broken and interesting at the same time. It’s disconnected in other ways than merely structural; it acts as a satellite, a viewing platform, looking down separate from those below. Every time I see a sizeable one in Minecraft, I attempted to plant my flag there — a true overlook on the land below.

Naturally occurring dirt shelves acting like stairs of ten or more steps are also aesthetically pleasing to me, and this world had both in close proximity. The staggered dirt can seem like unexcavated steps. As such, I built the remnants of a cabin, intentionally destroying some of the blocks post construction for that eroded feel

Trees are grown in squares of four to encourage overgrowth, leaving the steps and the ruins in the shade, and areas of the steps are flooded to give the image of a river running through. 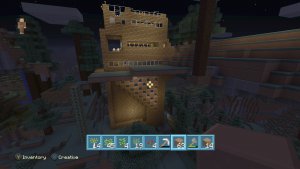 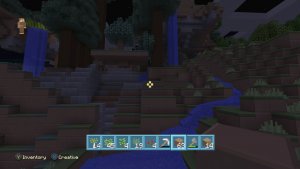 At this point, I’m suddenly disappointed to find that this is the sole relic remaining. I have memories of placing waypoints on distant hills, all of which account for nil truth. What confuses me at this stage is the realisation that I only have five worlds left to flick through. I admit to myself that my last maps either have to be behemoths, or that I’ve lost my worlds.

Checking through these saves, I’m immediately aware that two were examples of how seeds work and are therefore out of the picture. I know the worlds I want these last three to be, and it’s obvious to me that they’re unlikely to contain my diagonal, cliffside house full of cats, nor my weird, glass tower. Those two saves — if they even exist — are likely locked on a different platform.

After typing up my thoughts for the last section, I decided to start up a new world. A clean slate — something I should really stop doing. The world I create is named fleshwyrm, (no real reason, it’s just sonically pleasing to say) and as it boots up I’m immediately greeted by a floating orb next to a mountain range. The sphere is calling me. 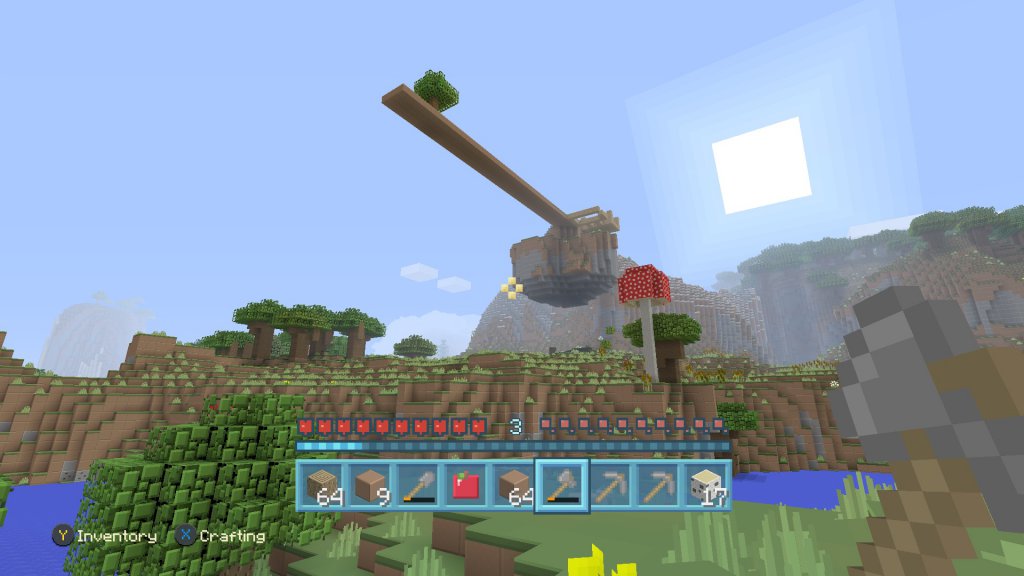 Some dirt is dug, enough to make a makeshift skypath. Leaping off the mountain, stuttering the jump, my avatar falls to their death. The diving board is reworked into a bridge — I can now easily get back and forth between the orb and the ground without dying.

I spend too much time making a set of staggered steps out of the side of the sphere, like the entrance to a temple but… lacking a temple. It’s just a bizarre, floating set of stairs. I take all the dirt I’ve mined and make a runway, long enough that I can dive headfirst into the water below. While such a plummet would probably either kill or maim you in real life, in Minecraft, the water lacks physics, so you just escape unharmed. At the time of writing, systems are being implemented into the original java version of the game to change the water properties — apparently sand can now float — hopefully they implement some form of rules related to volume, so that water will drain.

A bounty of axes are crafted; trees are felled on a nearby island; some time is spent mining coal and farming trees. I only manage to find eight pieces of iron, but it’s enough for two buckets, which will help transform the ends of my runway. Water is placed, a makeshift elevator is implemented.

The home is built with a combination of wood, a chest in the floor, then sand becomes glass becomes windows. Trunks become wood becomes walls and doors. Wool becomes beds. I place some torches both inside and around the outside, then gather up some dirt to make a little orchard area. I plant seeds and saplings, and think about what’s next. After returning to the house and looking out of the window, I notice a mansion of sorts. The plan now is to extend the bridge.

After about two weeks of playing around with this world, I contemplate scrapping it. The decision is heavily weighted towards the worlds I’ve recovered. It survives, but it’s unlikely to be revisited anytime soon. 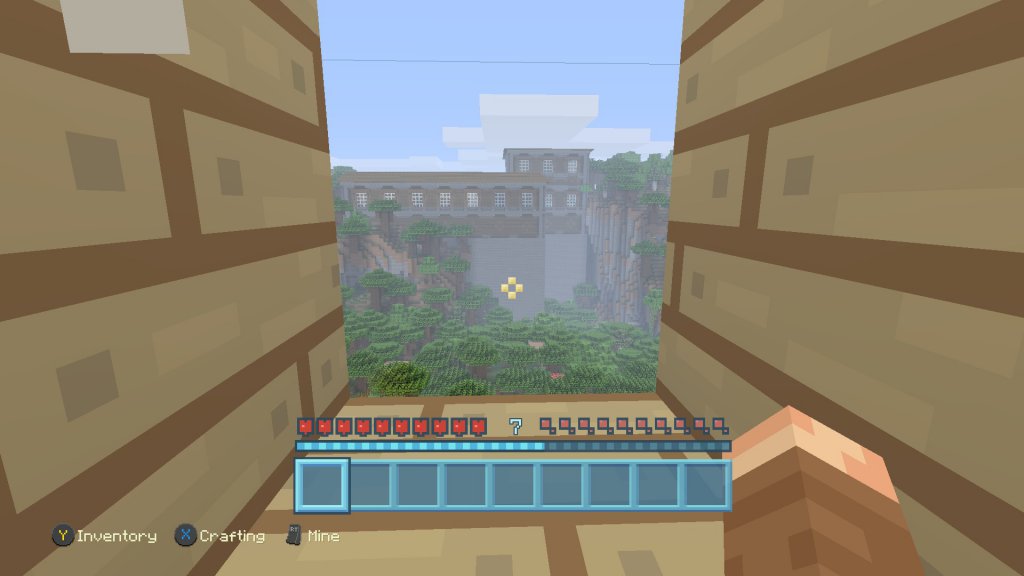 I make such a big point about how deserted and desolate my worlds are, and how I’d love to have multiple ideas in combined worlds rather than separate locations that showcase a single placemark, yet I’m very willing to scrap a world when it is no longer aesthetically pleasing. What was once a floating shed is now an eyesore.

Learning to ignore this doubt is important, but it’s still merely a digital world. Instead of having a true memory attached, it is almost malformed by its implied false nature — the nature that it only really exists as an accompaniment to an article. I had ideas for this world and crave making a true, connected world, something I guess I can’t force.

The true reason I bail on worlds isn’t due to a lack of creativity, but often that it seems that the world has been drained of resources, this is never the case. What is the case is a failure to discover resources. With the console versions, there is limited worldspace, which combined with dry veins has led to the assumption that the world is truly desolate.

The world size has been increased in subsequent releases, but this belief that the world is dry is still there, and I know it to be false, but it’s not going to stop me using it as an excuse.

I hope to one day make a world that has a house of sorts in each map, with a central connected railway. It’s not that hard to do — maybe rather than scrapping the world, I can just move to a different map piece.