Was the Boglin a bit too much?

Carrying on with my discovery of old, abandoned worlds of mine, I’m going to talk about another from the long list.

This next world’s seed is a combination of my work telephone numbers. My expectations place this as one of the worlds built backed up onto the sea. Upon loading, I’m surrounded by cakes and two beds. Upwards of eight cacti are visible as I turn around.

I wander and realise this is the weird statue house with the sand staircase that goes way too deep yet fails to find any caverns of worth; the massive blown-out pit which we spent hours draining of water by displacing it with sand; and the sandstone temple, which appears like it might house something

This world was an experiment — in retrospect the subject is monotony, but the idea was to create an underwater grazing area that acted as an aquarium. The goal was to fill sections of the house with thin layers of water. 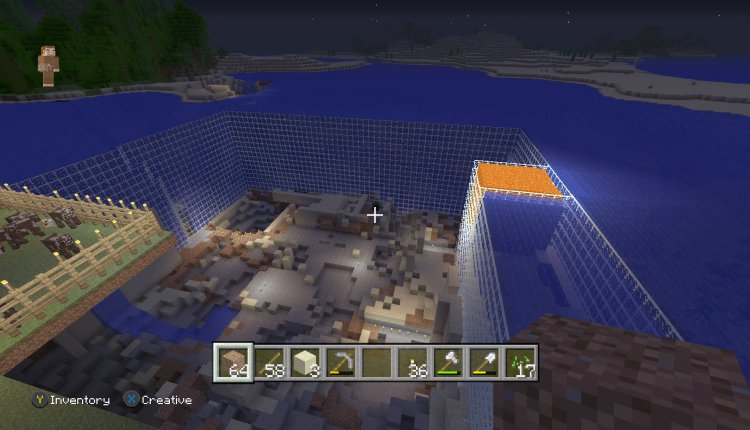 We spent hours using sand to block out the water. Remnants still linger. There are chests full of flint and steel. There are and stacks and stacks of TNT and spawner eggs, from when we decided to try using creepers as an alternative. It saved some time in the long run, but had a messier cleanup. A swimming pool full of lava is clamped onto the side, the idea being that the lava would act as a catalyst plugging the holes, with the reaction creating cobblestone. The pit is more interesting to look out of than at.

On the overcrop, there is a fenced-off area, which may have been my first successful implementation of animal breeding. Most of this world was created outside of creative mode, including the weirdly shaped house. 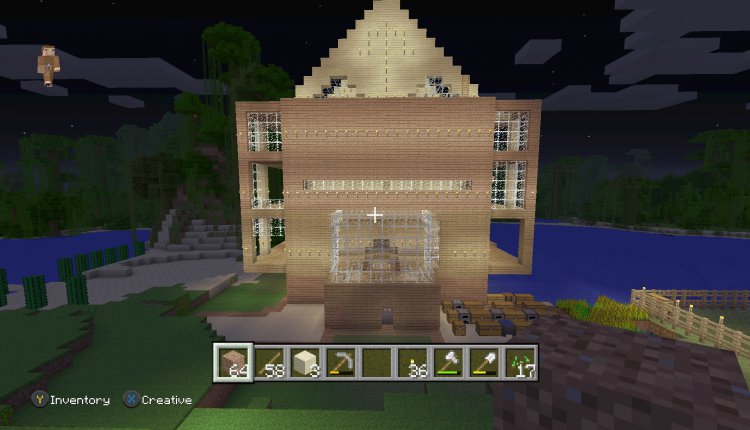 It was supposed to be a barn, but additional floors were added, to the point, that it looks less like an abandoned house and more like an unsold new building. In the end, it looked more like a boglin than a house — the water was never implemented and nor was the aquarium. We spent hours meticulously draining a humongous amount of water, leaving zero remnants of the core ideas we’d planned.

I check the staircase to see if I’d ever connected it to anything — it’s just a long staircase, leading nowhere. The sandstone temple is also a void. Remnants of plans never implemented skewed my memory, leading to vapid worlds that fail to meet the expectations, though I remember the hours spent fondly.

It’s time to move onto the next world.

This one starts within a skinny cabin three blocks wide, surrounded by chests and beds. It looks like what I assume a sleeper carriage from the industrial age felt like. It’s a nice little area which exits onto some farm ground, with plenty of crop and, a stone enclosure at the back of the cabin — I’ve been looking at the house backwards. 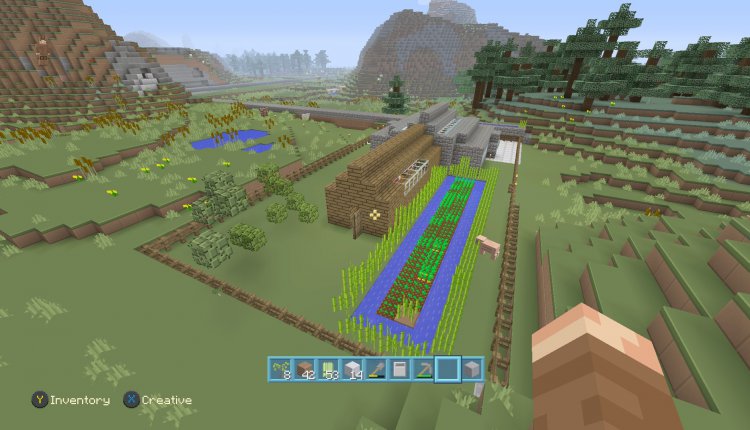 Looking at the farmland, it’s relatively symmetrical. The surrounding entrance of the house is andesite, which was a new material at the time and was quarried from a nearby rockface — one that appears to have been cleaved by yours truly.

There is something calming in the repetition of mining out a path or removing materials a layer at a time. The real reason I enjoy building inside mountains and caves is for the possibility of extending walls in multiple directions.

Following the rest of the path, which intersects the rock, it is full of mined-out pathways with open ceilings. The road ends at a village, which has a dirt-path — also a new feature to me at the time 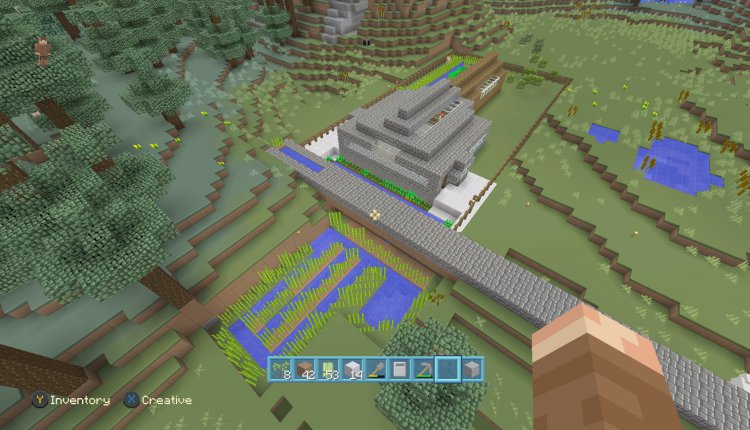 It might be that dirt paths, andesite and the other stones were introduced at other times, but this was when I started noticing and implementing them. I don’t even know the name of the third or fourth stone type

We had stolen some plants from the village, so we had some more variety in the farm. Somewhere else on this map is a nearby fortress, made by the other player, but I give up looking after a few minutes.

I load up the penultimate save, immediately surprised to find that it’s my coastal world — the only world where I actually managed to create a labyrinthian pathway from point A to point B. Using the speed of creative mode, I get lost in my world, flying from one side of the map to the other, escaping but failing to find any notifiers of where to go.

In retrospect, I probably used the wrong exit, but I notice behemoths of pillars scattered around the map. I fly to the tallest, knowing it to be the end of the road, and attempt to fly from one end of the map to the other. Going underground, I proceed to get lost in my own maze. I reroute from home base and spend minutes following the pathway of torches.

After a few minutes, daylight sears in the distance and upon exiting the hole, I can see the final pillar. After this brief freedom, I dive back in, following a much simpler route that manages to cover twice as much distance, via the path’s zigs and zags. This was one of the most realised creations from a travel perspective, with slight outposts along the way.

The exit leads into the basement of the house, a building that was created before I realised crouching would stop the player from falling. I fell off so many times on this building and listened to hours of podcasts whilst building it up — it was a great distraction, for about a month. 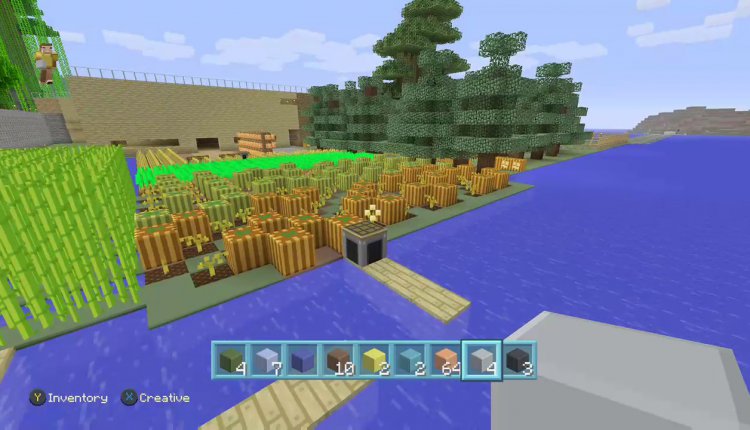 There was a pit behind the house, which I have no memory of constructing. I have to assume it was blown out, otherwise a lot of time was spent walling it up. Thinking about it, and the depths it reached, it must have been some form of naturally occurring hole — I know it wasn’t manually dug out and a bucket of lava was definitely used to seal the walls.

Tens of hours were spent on this world —the biggest I had ever managed and maybe still the biggest to this day. Certain ideas I have for construction were tested by this world and as such, some of the more sloppy constructs act as reminders on what to follow and avoid. I had always wanted to create a world like this, I just wish it had a more lived-in feel and seemed less like an abandoned house. 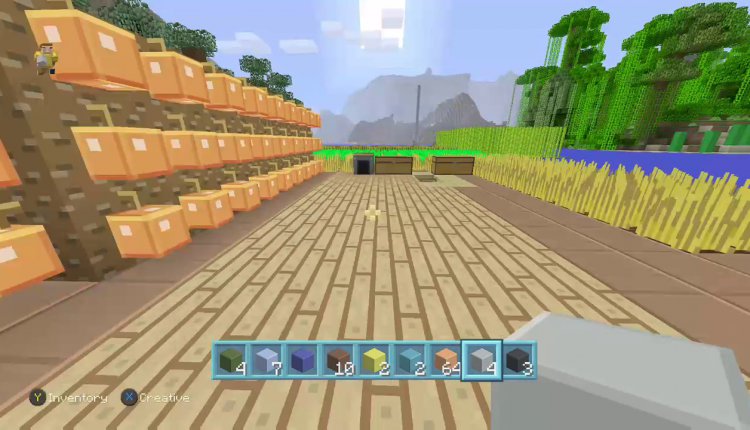 I decide not to open the final world, knowing it to be my most recent. I hope that the cliffside house exists somewhere out there, but even if it doesn’t, the creation of the world was more fun than post creation.