It’s time to say goodbye to Minecraft March, a made-up celebration that I hope isn’t trademarked or owned by major corporations. This has been a one-time celebration, featured solely in this series.

As we’ll shortly be leaving my habit of incomplete worlds and half-imagined constructs, it’s time to talk about the last of my saves and wind up this piece.

Since the first piece in this series, I’ve salvaged the last of my saves from an old hard drive and as such, can only reminisce about the saves that have been lost. These lost worlds show immediate reactions and a visualisation of the learning curve, a lack of understanding of core mechanics, a reliance on animal meat not caused by any form of carnivorous instincts, but a shrouded understanding of the growing and farming of crops.

It would be a while before I truly understood the farming mechanics — an expectation or a merely a misunderstanding led to a belief that all crops must be surrounded by water, leaving weird chequerboard farms for the first few months, later becoming alternating strips of dirt/water. Learning to till the land took much longer than I’d like to admit. 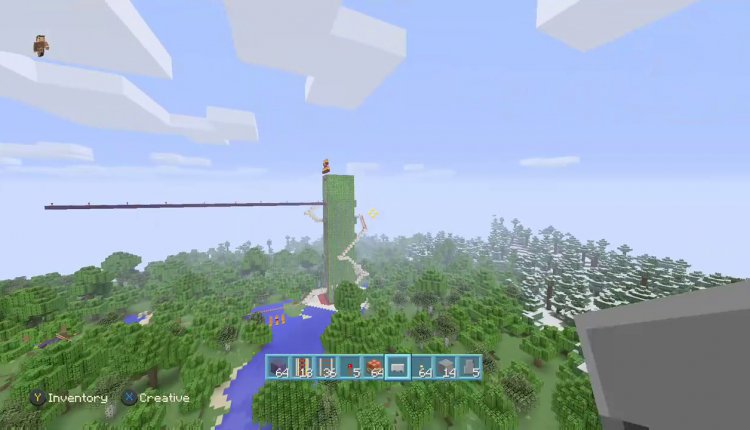 As the name states, it’s a rollercoaster: a small little route from tower, to base, to an end. The world was split during construction — I’d been playing some dungeon crawlers and had an interest in layered towers, full of specific mobs. An inability to place mob spawners killed that plan. There is a flaming pentagram in the basement, the idea being that it hid an ender portal, with the parts in proposed chests on each floor.

I had an idea for a spaghetti junction of a monorail system, with a different route on each layer — an idea which is better post town-construction than pre. Constructing rail routes is incredibly resource-ready, but normally worth it in the long run.

The cart system has some twists and turns but is as you would expect; a drop causes the cart to land back onto the same rail, which was fun to play about with at the time. Let’s move on to the little house and the end of the rail. 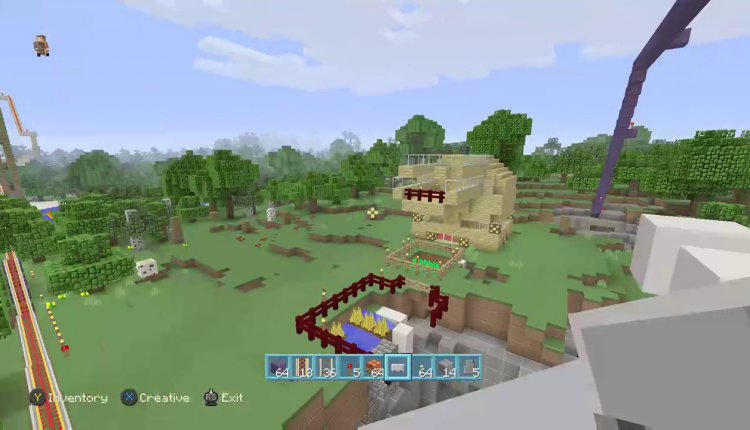 The house was constructed entirely by someone else, and it shows. It’s not that I’ve got an opinion on what is and isn’t good construction, it’s that I rarely deviate from my ingrained templates. They use fences to delineate a balcony, keep storage outside the house and have a reliance on iron doors and buttons.

Past this where the rail ends, there is a bombed-out tunnel, which is full of a ridiculous amount of spawned enemies. I assume they were spawned whilst I was building the tower — I was very surprised upon escaping the tunnel to see the swathes of enemies.

The next world I load is a bit different. It’s from an earlier time and is another co-op build, something all three of these worlds have in common. This was a really simple world — the plan was to build a little cabin near the sea, surrounded by trees, and venture out via boats. 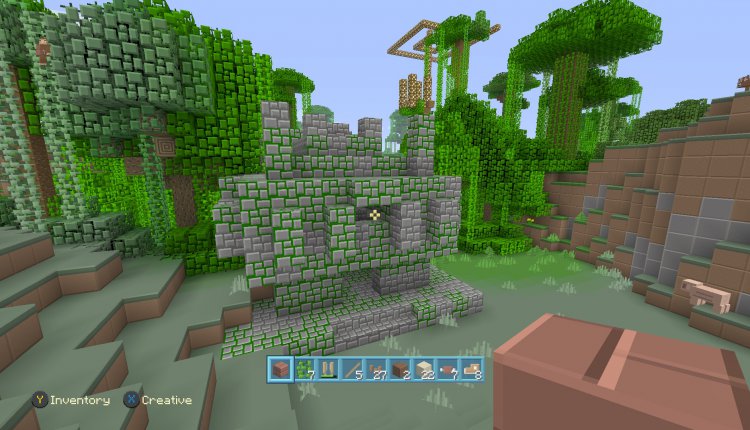 Upon venturing out, I found a overgrown, mossy structure, which I assumed had been built whilst I wasn’t paying attention. I entered and proceeded to set off all of the traps in the building. It’s a very small building, but it grabbed my attention and led to me vacating the premises and scouring for similar structures.

In the at least three years since this discovery, I’ve never found another one of these buildings in Minecraft. I’m always looking for them, and have come to the assumption they were removed from the game — the day I find another I’ll be pleasantly surprised.

The shape of the building was so alien to anything I’d build, it looked like a squatting frog. I didn’t create anything really of note in this world, but the construction continued in my absence. As such, it’s a really different structure to my boring layered houses. It has ladders! 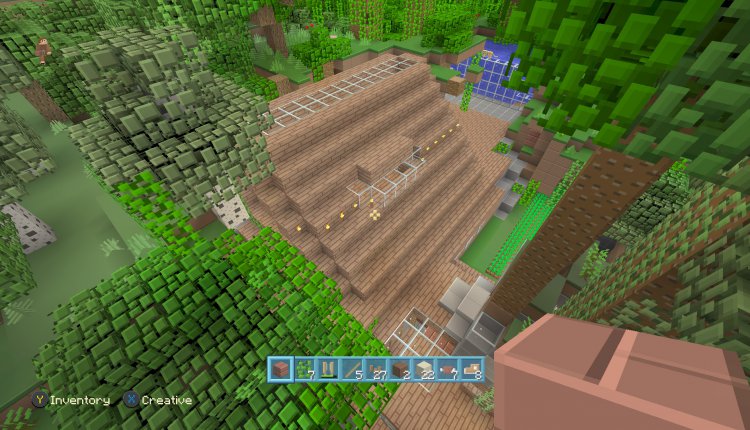 Onto the next, and final, world.

This last world was an attempt to build a house suspended in trees — in the end it just turned out to be attached to trees. This is one of my favourite worlds, if not my actual favourite. It’s a fully realised building whilst still being a sandbox. As such, in the distance are three- to four-storey mushroom trees built onto each other — very messy, but proof of learning.

Near the mushroom island is a strip of land with trees grown in squares of four from when I was shown this technique. I’d also learnt that you can plant saplings in a row and they will still grow, which is much different than what I’d previously been informed (‘each sapling must be three blocks away from any other sapling’). Because of that, this world has lots of trees in places I didn’t think were possible, like rooftops. 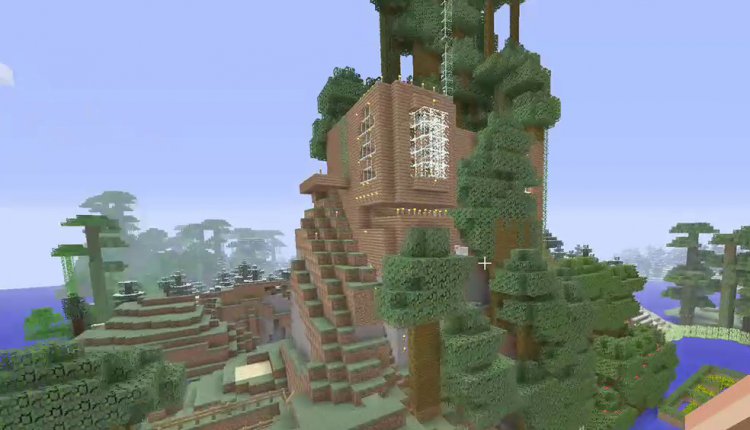 There is a row of trees hugging the house on the north and south side, masking the floating void below. The house is full of cats — roughly fourteen are sat in a single room meowing and confusing my real cat. There are two entrances into the building and two other routes solely acting as exits.

A series of steps on the back connect to a little pier, with chests full of boats and fishing rods. This building is really quite idyllic — it’s very green and homely. Elements of nearby animal farms can be seen: a series of boxed-in areas full of farm animals on the right and a pen on the left full of wild wolves and a single tamed dog. This would be the first time in game that I’d seen baby animals.

Incredibly close, almost equidistant from both, is a series of overgrown trees completely encircling some landmass. I mentioned it in a previous piece, but I really like the idea of using overgrown trees on disconnected landmasses as little secret bases. The big problem, however, is that trees cast shade, which almost always attracts enemies.

This was the first time I tried such a thing and it’s something I always try, but have yet to roll it out in a non-creative world due to spawning in worlds with both tons of jungle trees and zero nearby beaches — and vice versa.

Nearby is the final item, a pit that almost reaches bedrock, then manages to completely loop around to the exit in the basement of the house. Both routes were connected accidentally — the idea was that a clear tunnel would connect the two, but they perfectly intersected.

There is a nether portal hidden somewhere in one of the trees on the rooftop. It was a cool idea at the time, but I don’t want to destroy the scenery attempting to find it. There was once a clear route using vines, and pathways cored into trees. 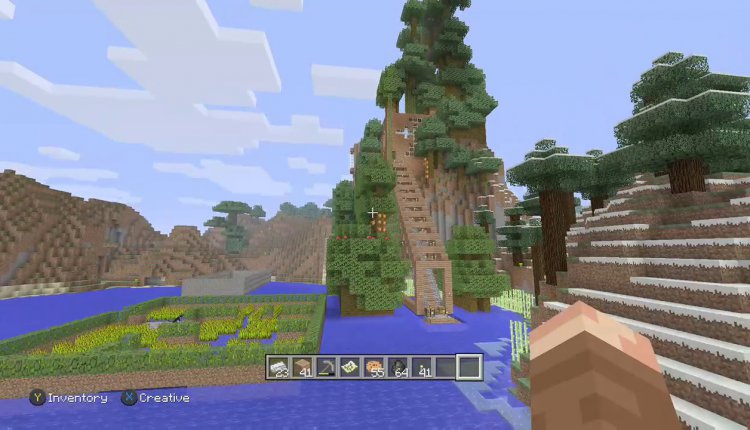 It’s been really interesting revisiting these worlds and it has given me plenty of ideas — I’ve already implemented a version of the connected-world idea, one that spans five map pieces. Lessons have been learned from reloading all these saves.

These last worlds all had a specific identifier, which highlights the time they were created. Sometimes it’s simple, but due to the staggered console version versus the weekly snapshots, there was a push to utilise the new items. As such, the three worlds were immediately identifiable to me by the following:

World 1: Ender chests on the roofs and netherbrick fences
World 2: Non-village structures in the overworld, the first and only time I would ever see a forest temple
World 3: Cats, and possibly jungle trees and cocoa, plus the use of bonemeal to cause overgrowth

But in truth, all three of these worlds have memories tied to looking after a younger sibling, better versed in the worlds and possibilities of Minecraft; a personal wiki page; and regular comments on the inferiority of the version, which immediately disappeared when the fun/creations began.

It’s clear that most memories cause reminiscences of finer details from the specific time. Most of these Minecraft memories are equal parts wonder and the conversations that were had during. I never would have expected to have such vivid memories of some of these worlds.

I can see what I’ve learned from these worlds and can remember that which I’d forgotten. It’s easy to forget the importance of a photo album — and while it’s often the finished product that is captured, sometimes the imperfect version is a more interesting memory.