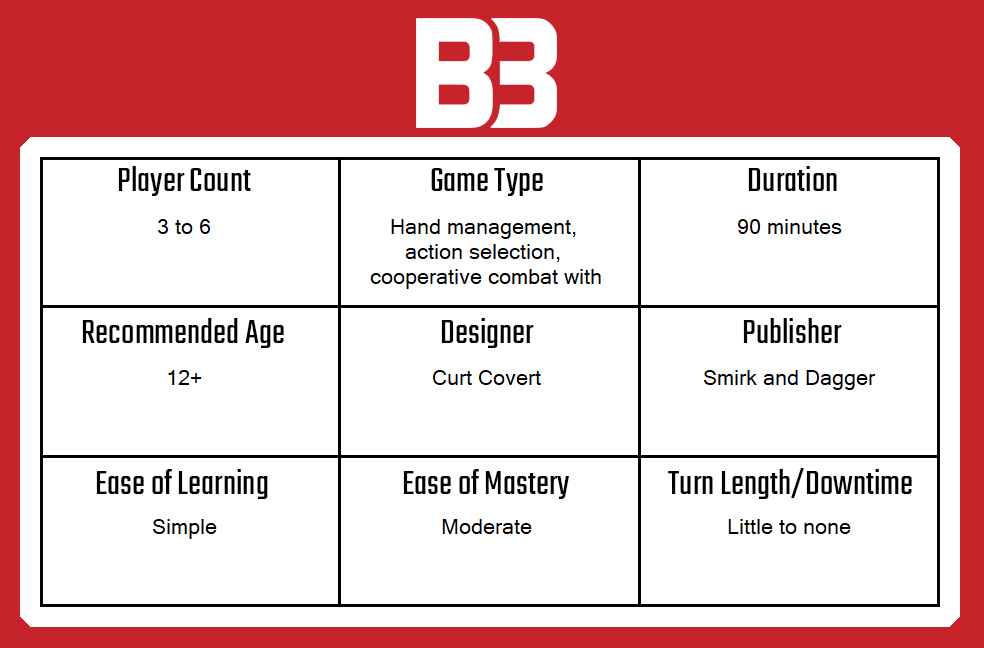 Have you ever wanted to set out on an adventure with your friends, clearing caverns of murderous beasts and claiming treasure as you go? Of course you have, but would you ever consider slinking away at the pivotal moment to leave them at the mercy of a terrifying Minotaur so you could grab the glory for yourself? Whether you have or haven’t, not many games allow for that, especially not those which are otherwise fairly light and thematic.

Cutthroat Caverns is a three-to-six-player game which lets players do exactly that. It promotes cooperative play during the earlier rounds (and on occasion later in the game) but as things progress, it tends to get increasingly more savage. The game comes packaged in a small box and — because it is ideal with four or five players who are willing to make and break alliances at the drop of a hat — it makes an excellent travel or party game. 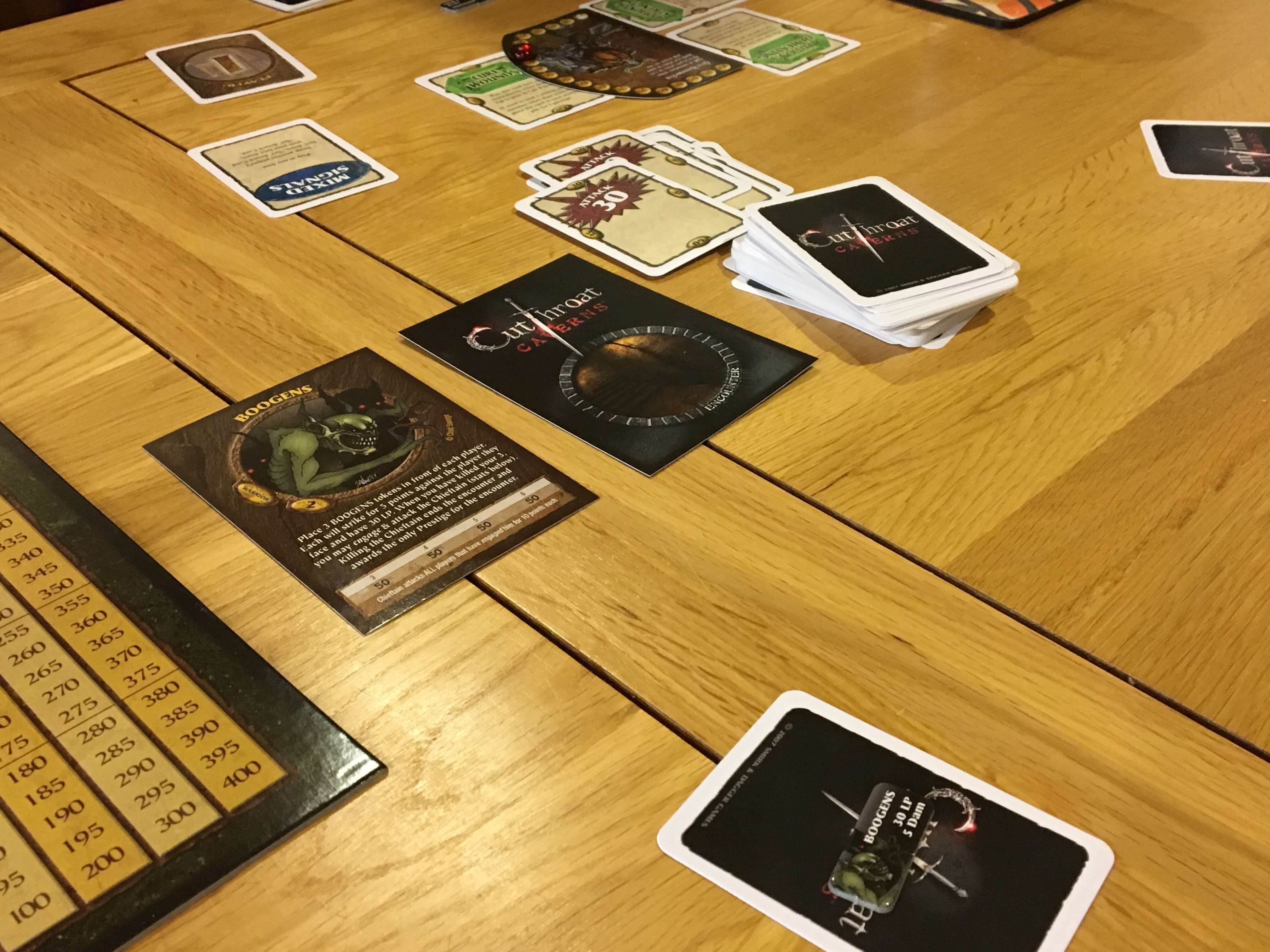 There isn’t a lot in Cutthroat Caverns’ box, but in many respects, it could be described as small but perfectly formed. There’s a monster health board, a deck of monsters, a huge pile of action and item cards and a handful of player cards with some coloured beads. A few tokens (some of which are monster specific) finalise the roster, along with a small, detailed manual which is perhaps good enough, without being spectacular.

The artwork, I must say, is a little bit unremarkable, but it is at least clear and unambiguous. Take the deck of action and item cards for example; I think in a modern game (Cutthroat Caverns is more than ten years old now), these would probably be richly adorned in full artwork. As it stands, they are fairly plain, showing just the attack value, item or effect in writing, with a different backdrop for each kind of card. This actually makes differentiating the cards very easy, which is very functional.

Monster cards are better, although in the style of the much newer Terraforming Mars, there is no rhyme nor reason as to how the visuals have been collected. Some enemies are represented in attractive, computer-generated stills, whilst others feature relatively basic drawn artwork. None of them look bad, but I would say that on occasion the suspension of disbelief can be lost as a result of style changes from one card to the next.

There isn’t much else to consider, really. The player cards do actually have consistent artwork with uniform presentation, which is nice. The manual is fairly good but does use large sections of text to illustrate points when an example might be better — but I’m really clutching at straws now, to be fair. Overall, given the price point and age, I have no major complaints about Cutthroat Caverns at a component level. 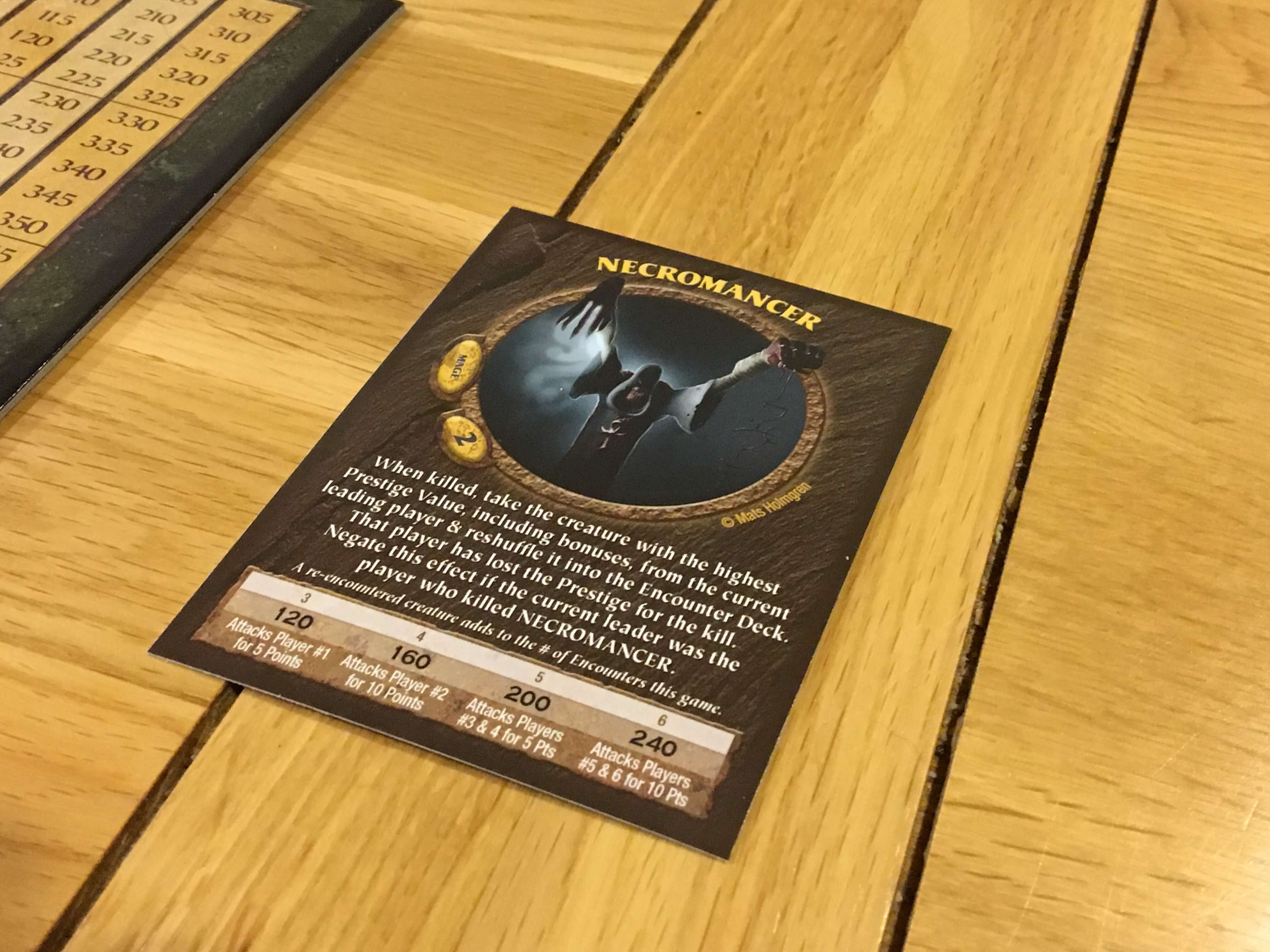 Cutthroat Caverns is basically a hand-management and action-selection game, with a heavy focus on the balance of risk and reward between betraying your friends and cooperating with them. Every game of Cutthroat Caverns lasts for at least nine rounds (and some effects extend it) but only one player can win. If everyone dies, everyone loses.

Each round represents a different enemy or obstacle, most of which come complete with a number of rules about how (and who) they attack, as well as any specific features that must be considered. Some enemies hit every player for a modest amount of damage, whilst others target the player doing them the most damage. With these special rules in mind, players then use the cards in their hand to attack the monster before it can retaliate.

At the end of the ninth round (or more, as the rules of some cards dictate), either the sole surviving player or the surviving player with the most prestige points wins the game. Each creature is worth prestige points, but only the player who lands the killing blow is awarded them. Some of the item cards in the deck also provide victory points, although they are relatively low value compared to those awarded for defeating creatures. 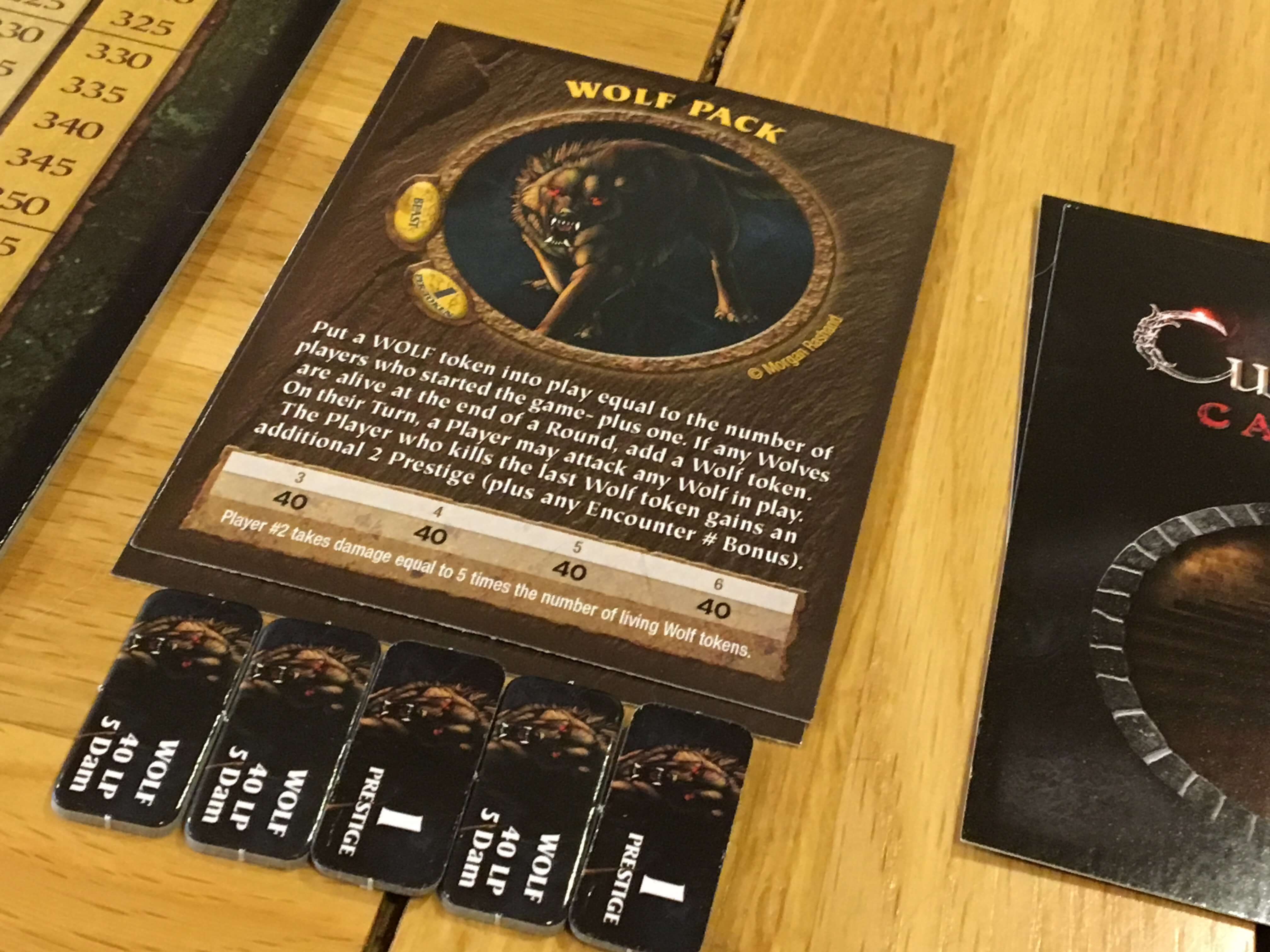 Following a brief period of adjustment to accommodate simultaneous card placement, Cutthroat Caverns is very simple. Essentially, the players are each dealt an equal hand of five action cards, which comprise attack, item and response cards. Players usually place items cards on the table immediately, face up, until they wish to use them. Some item effects are constant or situational, in which case they are usually self-explanatory.

Once the players have assessed their hands and seen the enemy they face, they each place an attack card face down in front of them. These cards are then resolved in player order by flipping them over one by one. On each attack card there is a value such as 5, 10 or 50 and some have special attacks which cause critical hits, sneak attacks or other effects. This damage is resolved one card at a time until the monster has zero health, at which point it is killed and the player who dealt the final blow claims its card (and the associated prestige points).

Early rounds tend to be fairly simple, with all players just doing their best to deal damage in a straightforward way, with one eye on their position in the turn order at all times to try to avoid helping an opponent gain the kill. In later rounds, the play becomes much more cutthroat (surprise surprise) with reaction cards and similar being used to actively block players from taking their turns or to focus the attention of the monster onto another player. 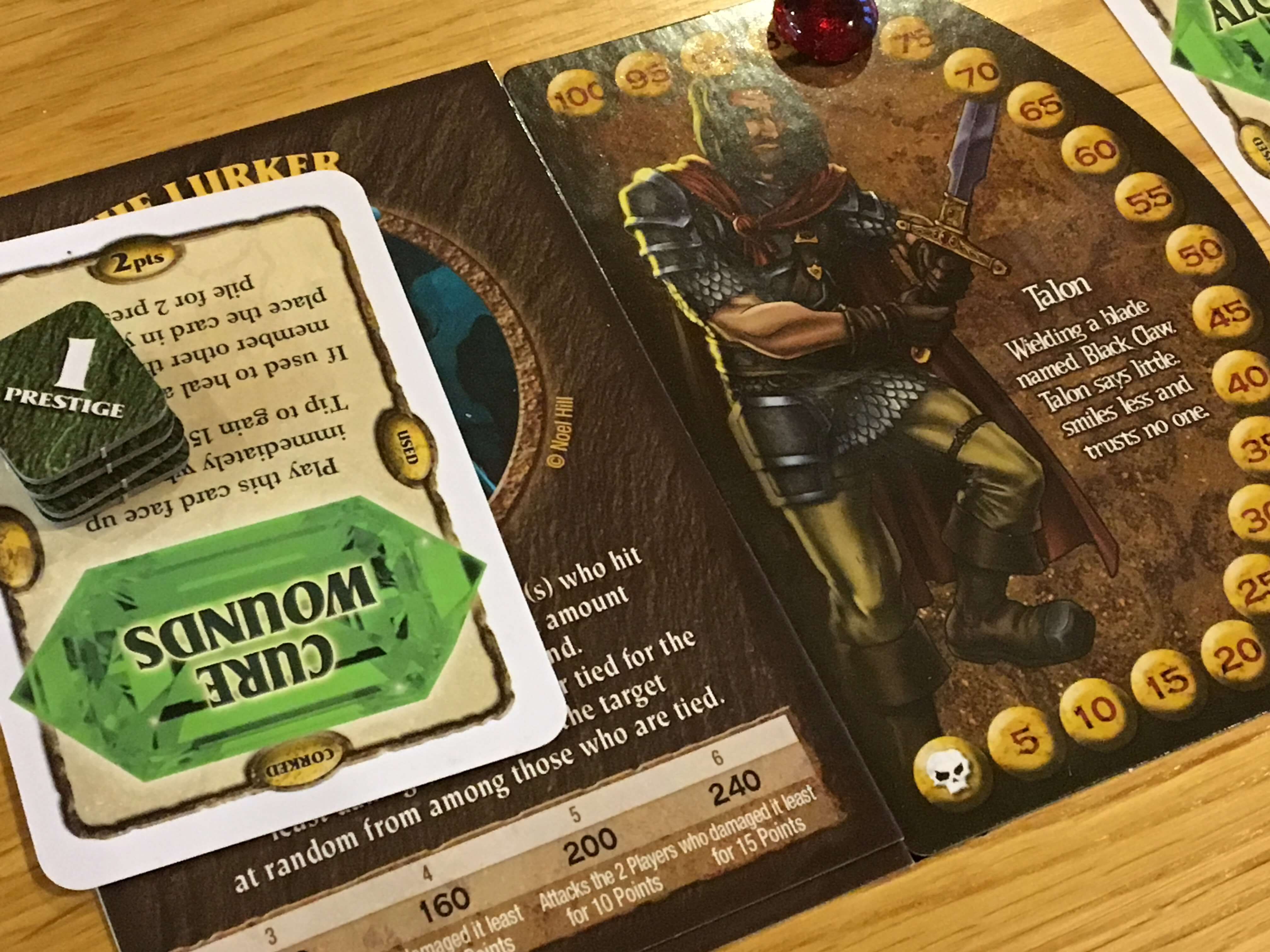 As play continues around the table and the monsters begin to fall, a leader starts to emerge. A fair number of monsters (and several items) are worth a relatively small number of prestige points (maybe one to three) and then something might come along that is worth more, changing the natural order of things. That might well be the catalyst for someone else to ramp up their efforts to unseat that person, using whatever underhanded tactic they have available.

This tends to happen around the midpoint of the game (give or take an encounter or two) because the damage that enemies dish out tends to be fairly even-handed. In effect, it’s unusual for one player to have much less (or much more) health than the others until they’ve fought several monsters, so it’s not usually sensible to start your offensive against them too early, because the result is that you’ll likely both die in the tit-for-tat war that follows.

What happens more frequently is probably most accurately represented by the game’s title — I’m referring, of course to the cutthroat aspect. For a player in maybe second or third place among the prestige points, the real trick is in timing your attack so it has the maximum effect, without allowing your higher-ranked opponents to take extra points by surviving into another encounter.

If you have a clear-cut opportunity to cause an opponent’s death, you should almost always take it, but in reality those opportunities are rare until the very last one or two encounters. There is no direct players-versus-player combat, really, so achieving this is all about the misdirection and disruption of best-laid plans. Cutthroat Caverns also drives a lot of communication between players — whether that be coercion, negotiation, heckling or worse! 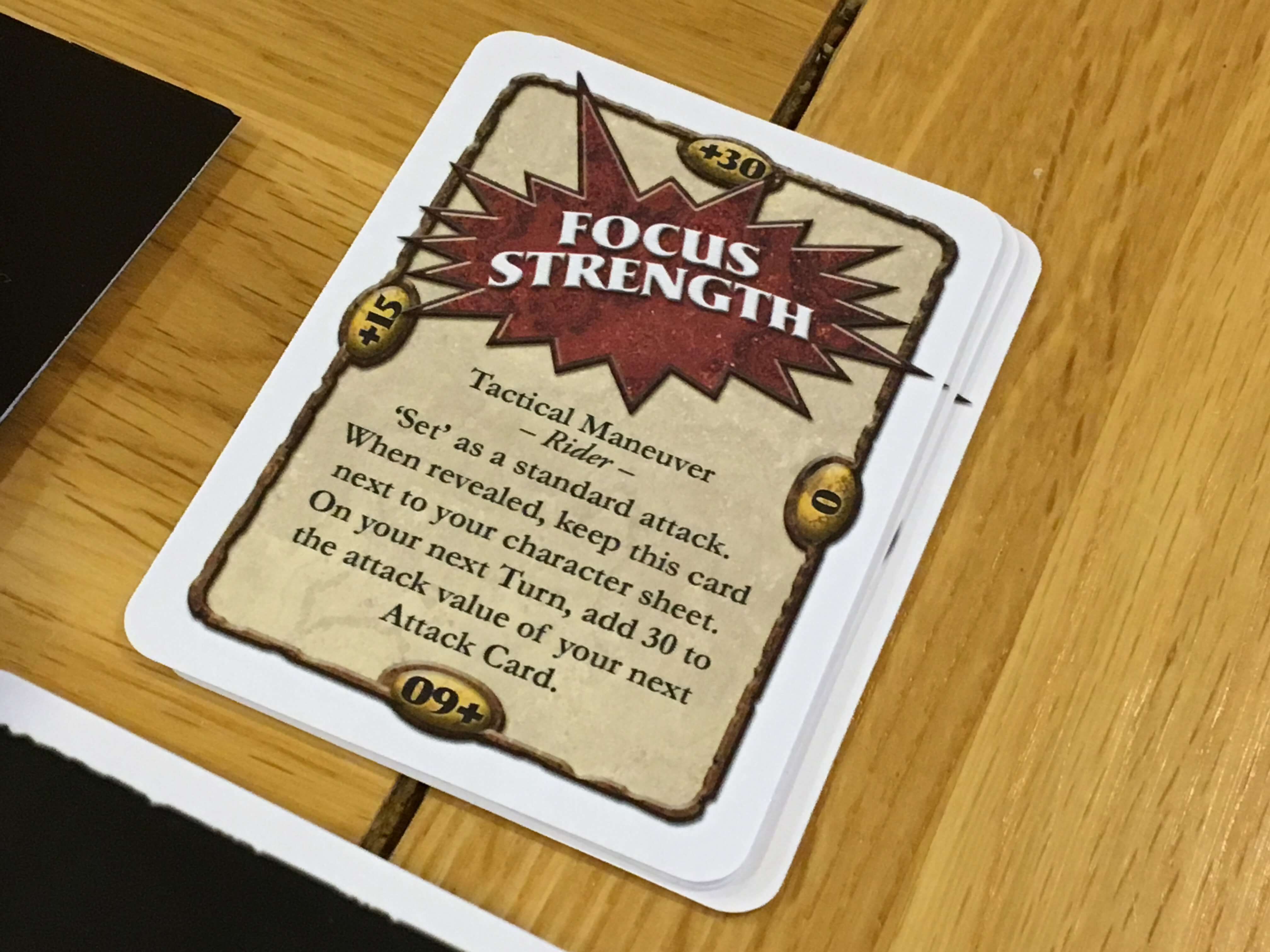 Ultimately, whilst I think that updated artwork would benefit Cutthroat Caverns, its existing presentation does not detract from what is an excellent experience in any material way. My only other negative consideration is that there could perhaps be five or six more monsters to fight in the base game (although there are tons of expansions already available).

On the positive side, Cutthroat Caverns is really all about the gameplay. It’s a hugely enjoyable, exciting game that is easy to teach, easy to play and reasonably varied both on the board (because of the random monster setup) and because everyone tackles the strategy of backstabbing their friends in subtly different ways. Whilst I’ve mentioned in past reviews that so-called ‘take that’ mechanics can spoil otherwise traditional games, that’s not the case at all in Cutthroat Caverns because fundamentally, it is what the game is all about.

Of the various groups of players I experienced the game with, I can’t think of anyone who said that they wouldn’t want to play it again. On most occasions, we did make a full evening of it, playing perhaps two or three games, rather than moving onto something heavier or more serious. I think that’s because Cutthroat Caverns instils a thirst for revenge in losing players that most games don’t, which I think is both unusual and interesting.

All things considered, Cutthroat Caverns is a lot of fun and it’s well worth considering if you’re a fan of party or lighter games with lots of interaction.