Coffee Crisis — Crush alien invaders with the power of coffee and metal!

Initially released in February 2017 as a Sega Genesis cartridge, Coffee Crisis gave new life to the classic console. Classic side-scrolling, beat-’em-up action and two-player, co-operative gameplay make it a brilliant addition to your retro gaming collection. However, in May 2018, Coffee Crisis moved from the retro era to the modern by re-releasing on Steam.

The first thing you notice about Coffee Crisis — at least I did — is its fantastic soundtrack. Heavy metal riffs and guitar licks set the tone of the combat-intensive gameplay. Punching aliens, elders and cowgirls with lassos never felt so good!

The excellent artwork displays the care and hard work that went into developing the game. Pixel animation and backgrounds work wonders to create an environment that expands your imagination as you play. Move from the streets to a concert and even a factory, all while battling your way through enemies and bosses.

One sure way they expanded the game is with mods and stream interactivity. Mods add elements to the game which weren’t originally there. From powering up the player to mop the floor with the bad guys to allowing the enemies to mop the floor with you, there are multiple ways mods can affect the game. If you are a streamer, you can even add another element to your stream by allowing your viewers to vote on the mods that will be active during your battles.

The only real issue I had while playing the game was its sense of repetition. Not in terms of gameplay, as the mods changed things up from time to time, but in terms of the enemies. When not fighting a boss, the enemies were all the same. I don’t mean in type — it was literally the same enemies throughout the game. No matter what the setting was for each level, the enemies that spawned were all the same. Honestly, that kind of removed the level of immersion I look for in a game. 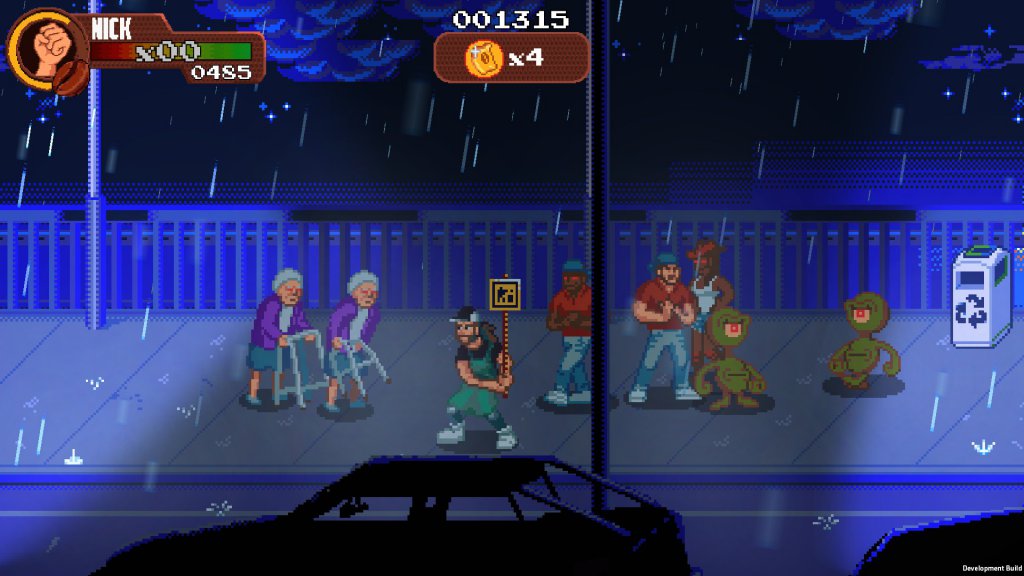 That isn’t a game killer, though. Coffee Crisis is still great, and I understand that the original was limited by the hardware of the Sega Genesis/Mega Drive. However, I do feel that for a Steam port, more work should have been put into new designs for enemies, items and characters. Sure, the mods and stream interactivity add to Coffee Crisis’ overall replayability and are significantly interesting choices, but the game has been out for a little over a year. More time preparing for an improved port would have been a better choice.

As I said above, Coffee Crisis missed an opportunity with its port by not adding more new enemy, character and item designs. Moving ahead, if Mega Cat Studios really wants to gain better traction with this game, they can do it, but I feel that they’ll have to add more. It’s a great game and deserves to have more recognition, but at present, its own limitations are holding it back.

The only threat to Coffee Crisis I can see from this point is someone else taking up the quirky, metal-head, beat-’em-up genre and doing it better before Coffee Crisis has a chance to improve and take that spot. It has an opportunity to stick out among the niche of metal fans, but it needs more substance. I truly hope that it can gain the traction and support that it deserves and that we see more from Coffee Crisis and Mega Cat Studios.

You can pick up a copy of Coffee Crisis from their website or on Steam, for $5.99.

UPDATE: On 5th of July there was a major content update which added 5 new levels, 7 new bosses, and a bevy of new enemies, monsters and items.