The state of sports games on the PC over the past decade has been utterly depressing at best. EA, the reigning ruler of licensed sports games, left PC gamers in the dust long ago with only FIFA still standing. 2k Sports filled in the gaps a bit, but while it’s NBA series still goes on, baseball has been missing 2012. Sure, the poorly received R.B.I. series made a foray onto PC, but it’s time was short lived. Licensed sports games may bring in that name brand cache, but there was a time where that wasn’t always the case.

Baseball in particular has had some real gems without MLB licensing, from Hardball! to Baseball Stars, others have made some quality baseball games without the name recognition. The most recent to do so was Metalhead Software with Super Mega Baseball just a few short years ago. The fun and spirit of some of those classics were back! Now Metalhead are at it again with Super Mega Baseball 2. With a highly lauded debut, the pressure is now on with the follow up. So it’s time to step up to the plate and dig in. 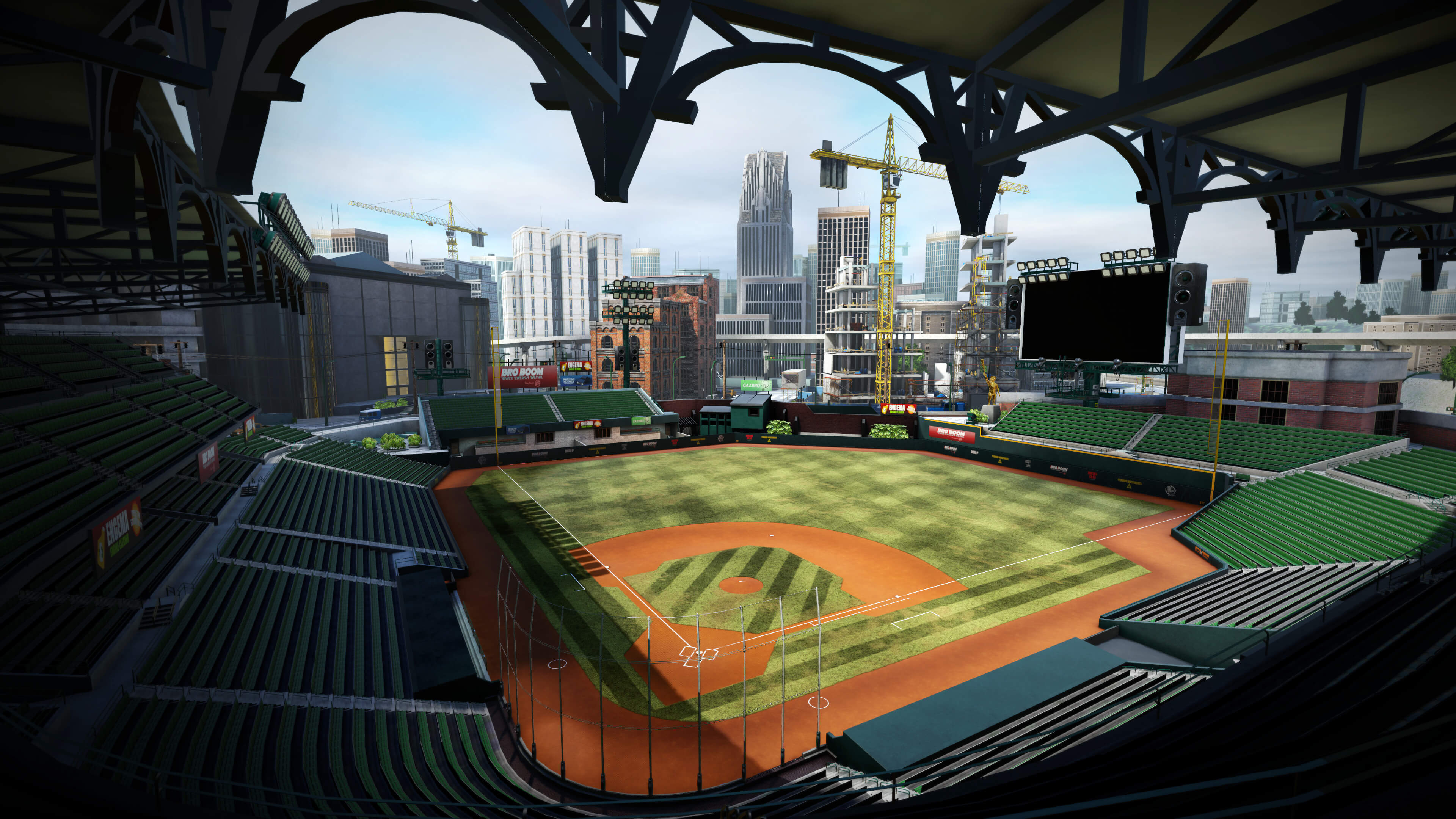 First things first, any sports game needs to at the very least get two things correct, the rules of the game and a fairly close approximation of the physics involved. I haven’t noticed anything obvious about the rules, those all seem to check out, although I didn’t exactly try and get into a truly oddball situation to test all the limits, but suffice it to say it’s all good in the rule department. So that leads to the next building block, the physics. Ball movements do seem accurate, or accurate enough that nothing about it seems off. The same can be said for player movements, although they do evoke some occasional memories from games of old (not in a bad way mind you).

The best way to really describe the on field action is that of a more modern version of old SNK baseball classics such as Baseball Stars and Little League Baseball. Both the pitching and hitting incorporate newer techniques, in regards to locating a pitch and directing your swing. On the flip-side, fielding and base running have a lot more in common with those classics. If you’ve played a baseball game this decade the pitching won’t be very foreign. Aiming is the main component here while there is no “power bar” to speak of. That’s something I quite like, as it was the same in the first installment as well, while it is possible to overthrow a pitch it’s not entirely needed to have a power bar. Throwing a fastball but with less “power” doesn’t make it a change-up, so the power meter concept is a bit silly and I’m glad Super Mega Baseball 2 doesn’t use it.

As a batter though things seem a little different. There are still the same contact or power swings but there is something new, or at least something I don’t remember from the first game and that is more active tracking. While this is mostly on auto, something that does vary in its effectiveness with the difficulty, players can aim the swing a bit more directly at the ball. Again, this is something you can find different variations on in other modern baseball games. Personally though it’s something that I don’t care much for. 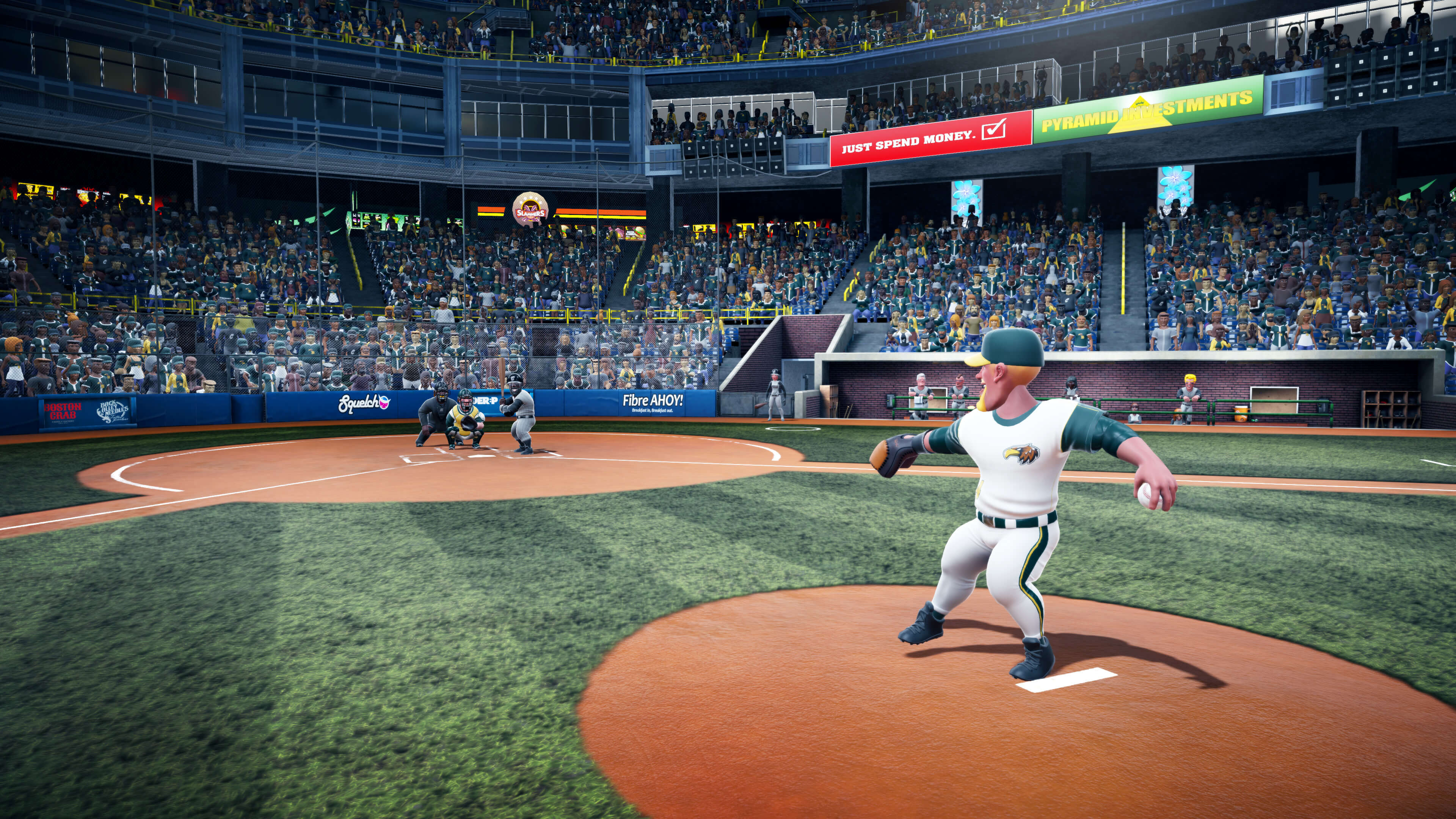 The reason I don’t care for this kind of extra layer to hitting is somewhat simple, you see the ball, you hit the ball. You swing to meet the ball and if you are following it with your eyes there is no added conscious component of aiming the swing as well (subconscious or even unconsciously, sure). It could be argued that it is simply mimicking that following of the ball with the eye’s, except that something already done by watching the ball out of the pitchers hand and determining whether or not it’s going to be a strike. It just feels unnecessary or even just doubling up of what already is taking place in your determination on whether to swing or not. Essentially, it doesn’t quite feel natural.

Out in the field the story is a familiar one with fielding and base running. The fielding does seem to be improved, especially with AI routes to the ball. The fielders definitely seem a bit more mobile and there were very few occurrences of dropped or missed balls because the AI turned over control to you at an odd place. The base running was something I wasn’t very enthusiastic about in the first game and it feels pretty much exactly the same this time around as well. Part of the issue with base running is the band box feel to the stadiums. Doubles in the gaps wind up more often just being long singles. Taking an extra base as a lead runner is ok, but trying to manage the rest of the runners can be a pain. If I have a runner heading home and one on second base, that I want to send to third, there seems to be a disconnect. I want the runner from second to go to third, but the game seems to think I want to send the lead runner back to third instead, which can of course be rather frustrating. 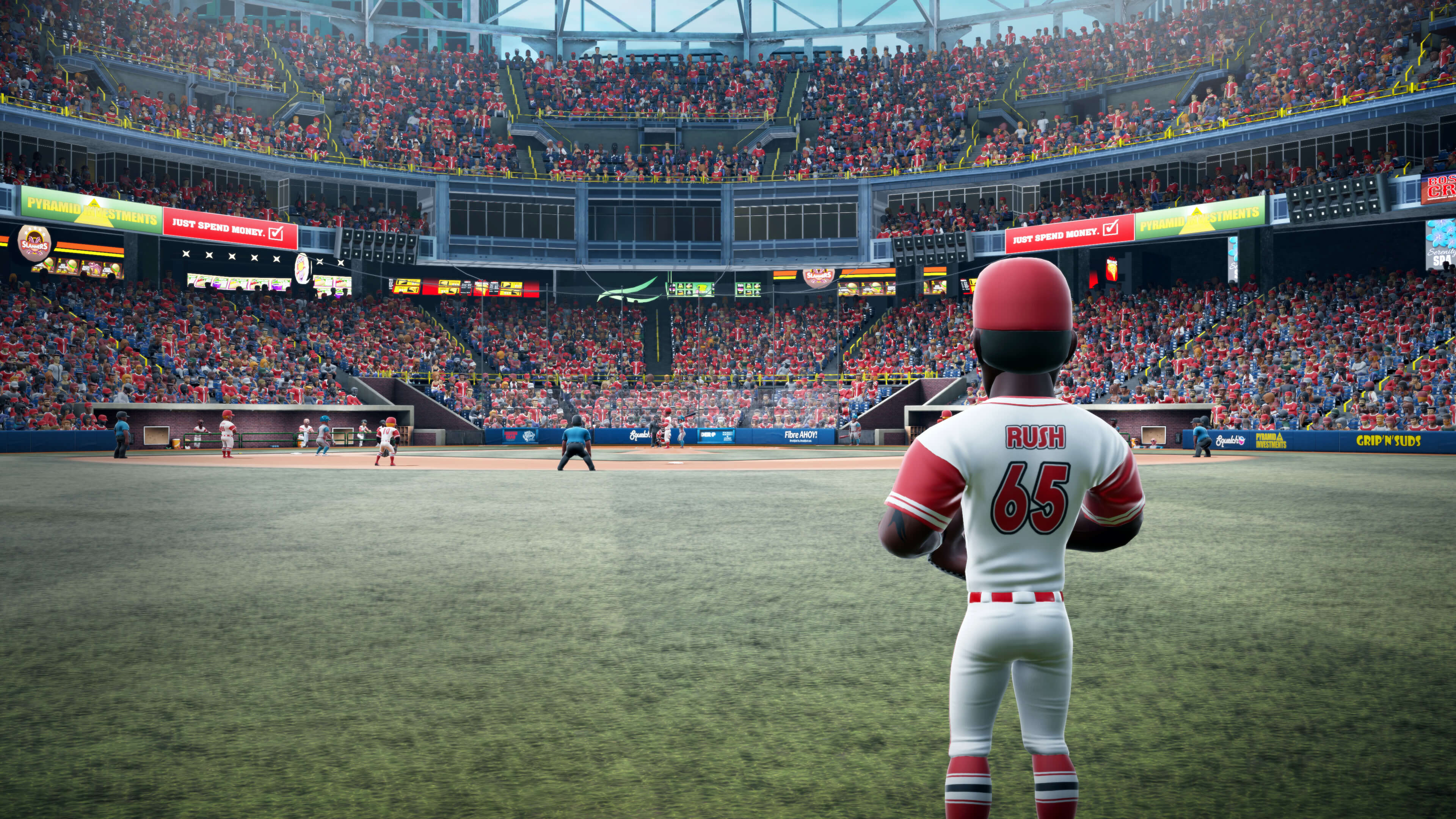 One of the more notable aspects of the first game is the seemingly wild cast of characters on each team. I’m fairly certain I had a pitcher that could double as Bernie the Brewer on his off days. With Super Mega Baseball 2 those sort of eccentricities have been toned down to have a more “normal” look. There is still plenty of wackiness to be had, but it will require some editing on your part and possibly the purchase of some of the game’s DLC packs. So if you aspired to a more natural look you are good, but if zany is what you desired it may costs you a bit more to take the wackiness level up a notch or three.

An area that has seen a big revamp in Super Mega Baseball 2 is the player progression. Gone is the old system, replaced by one that sees progression based on actual on the field accomplishment. I like the switch in this case as it’s straight forward. Results driven progress seems far more natural than the previous system. It’s more baseball and less RPG.

Probably the most requested feature from the initial game has made it’s way to Super Mega Baseball 2, multiplayer. Not just any multiplayer either, online games as well! So if taking on friends or strangers in a game is your thing, have at it. 1 v 1 online competitive matches, 2 v CPU cooperative seasons and friendly exhibitions 1 v 1, 2 v 1, 2 v 2, 2 v CPU are all available. You asked for it and Metalhead heard you loud and clear. 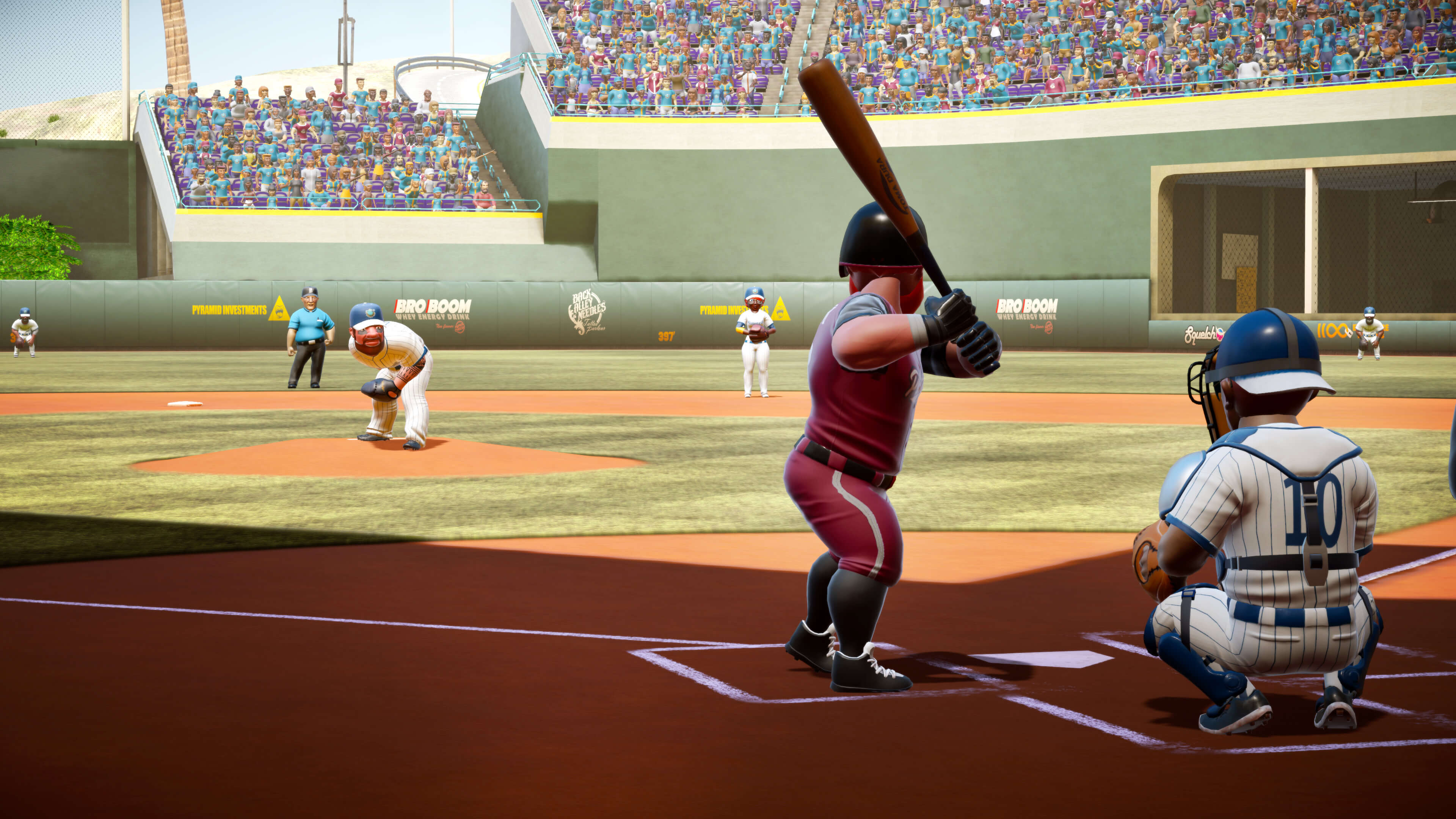 Don’t get a big ego

Last but not least the ego based system of difficulty has returned. This has of course seen a lot of praise the first go around and this time is no different. Being able to fine tune the difficulty from 0-99 has some real advantages. Mainly being able to get the difficulty just right for your ability. This does lead to an interesting quandary however, what exactly is the right difficulty? If a game is too easy, it makes sense to bump up the difficulty, but by how much? But even more so, if the game was too easy, was it due to too low an ego setting, or was it a particularly good match-up for your team. The opposite is also true, was the difficulty too high, bad match-up, both, none? It’s certainly one of those things that’s going to take some time to get just right. What right is however is up to you.

So where does this all leave us? Like the game that started it all Super Mega Baseball 2 will no doubt leave lots of fans pleased. Changes to the progression and a slightly less garish look may be missed by some, but the inclusion of online play should make up for that or possibly buying the DLC’s. Bottom line is that it is indeed a better baseball game than it’s predecessor. I certainly enjoyed my time with it. If you didn’t play the original, now is as good a time as any to jump aboard.

At the beginning I talked a good bit about licensed sports games and there was a good point to that. They are good at keeping players engaged as fans of one of the real life teams in ways that are hard to do with teams that are entirely made up. That’s where the line of separation might lie with this game, while it is a good product overall, can you latch on to these fictional teams? Sure baseball is indeed baseball, but if having those familiar names attached is a requirement this might not be the game for you. While that might not be quite fair, at the end of the day that may very well be a deciding factor for you individually. If you are however open to the idea of a fictional baseball universe you won’t find many better than this one.

Super Mega Baseball 2 is available now on Xbox One, PS4 and PC.