City of Brass Review — Steal the Treasure to Become a Legend

City of Brass is an Arabian Nights themed roguelike; an action-packed adventure game put together by the developers at Uppercut Games, who happen to be veterans of the Bioshock series. The game is set in a long forgotten city, filled with undead creatures and deadly traps. You play as a thief who must traverse these dangers in order to both survive and make your way to the center of the city, claiming the city’s treasure for yourself. No one has ever made it back from the city. Will you be the first?

City of Brass stunned me, at first with its trailer, then with its graphics. I love the Arabic aesthetic, especially the architecture. The sparkling spires at the top of the sheering towers that await you ahead. What secrets they might hold is an ever-boding question that sits heavy on your mind as you play. Traps also line those beautiful corridors, rooms, and streets.

As you explore, the traps become more deadly and more intent on killing you before you can make it to the treasure. To put the icing on the cake, it’s all procedurally generated. The enemies, the traps, the rooms; everything is different each time you play. Unless, of course, you save the seed code presented when you die, as to play that combination again.

Also, the combat is fun and will feel very familiar to veterans of the Bioshock games. I will admit that the swordplay is a little stiff, but once you get used to combining your sword and whip attacks things get much more fluid. This brings me to another point; your whip is your best friend! From stunning your enemies to knocking them down and disarming them, your whip can be used in many ways while in combat. It also can function as a means of travel, allowing you to swing from certain objects around the map to reach high up platforms or just to jump over enemies. You can even use it to pick up treasure and projectiles, activate traps, or pull enemies into the to kill them. However you use it, you  whip is your key to staying alive.

I have to say, having spent some time playing City of Brass, this game is NOT about being a thief. That doesn’t necessarily make it bad, but I think it should be noted that it is listed as what the game is about. This feels more like a treasure hunter, maybe an Arabian Nights meets Indiana Jones. Again, understand that this is not terrible, but it does take away from the game’s initial premise. I came to the game expecting to have some stealth and espionage gameplay, mixed with the combat style shown in the trailer. Unfortunately, I was a little disappointed to find it was more about that brutal, fast-paced action.

Another aspect that takes away from the experience is the timer. Usually, a timer is there to add to the score at the end of a level like in classic games where highscores were the main aspects of the games. In this however, it just feels like an extra element that is unnecessary, only there to stress you out. It makes you anxious, and not in a good way. If you happen to run out of time during a stage, an orb of fire follows you for the rest of the stage, trying to kill you. This was just, for lack of a better term, overkill. Luckily, the developers have made this optional.

However, even with the timer, exploration can pay off in a big way. As you make your way through each area, there are achievements and hidden treasures you can find that unlock more items that may be purchased from the genies that are littered throughout each stage. Collect enough treasure and gold and you can purchase them to amplify your play tactics, or make the game harder for yourself… whatever you’re into. You can also unlock burdens and blessings that are specifically made to hinder or help. Each comes with drawbacks and benefits, depending on which side of the board you are on. Burdens, for one, often reward you for playing with them while blessings do not. Though, blessings make the game much easier for beginners. 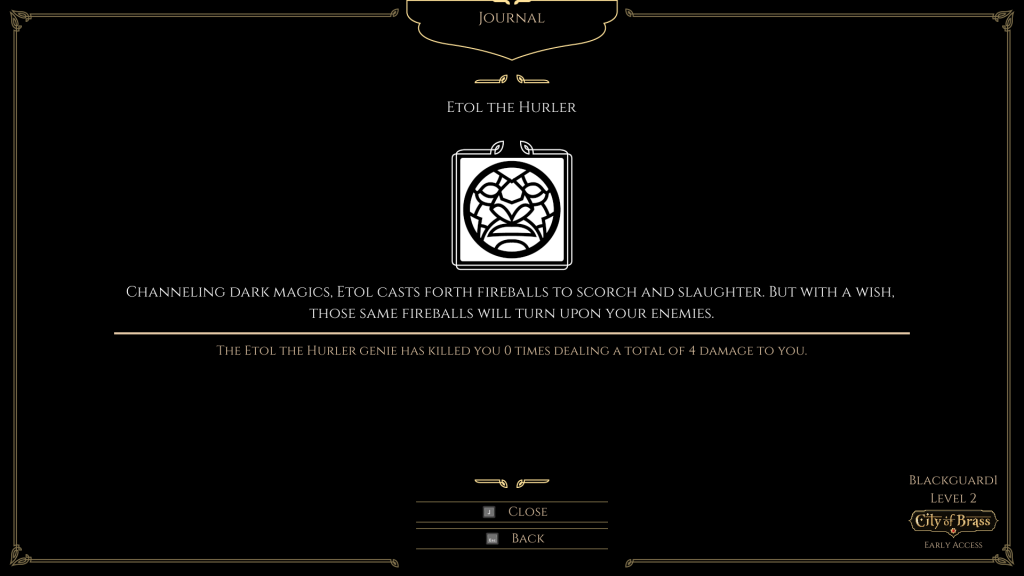 Items can be unlocked, then found and bought during each stage.There is a stiffness about movement in City of Brass. A stiffness which I cannot quite figure out how it could be remedied. It could be just me, but I have a fairly decent computer for gaming, and for some reason moving through the game just felt a little stiff. Combat, swinging, running, climbing — you name it — it felt like I was running on syrup. Now, this isn’t really a detriment to the game at all, you do adapt in time, but I do think that some fine tuning could smooth out the movement and combat. As I said above, the combat is great as it is. It just needs a little TLC, in my humble opinion.

In conclusion, City of Brass is an excellent game, and I can’t wait to see more of it. The procedural generation of the game allows for a lot of replay value. The high paced combat will keep your adrenaline pumping as you move faster toward the goal of the mysterious treasure awaiting you. The magic and wonder will keep you captivated and exploring each room in its entirety, gathering gold, treasures, items, and other secrets along the way. How you do it is up to you, but it’s a journey I highly recommend you make!

You can pick up City of Brass on Steam, Xbox One, and PlayStation 4.

Necromunda: Hired Gun — A Flawed Experience, but at Least You Have a Dog