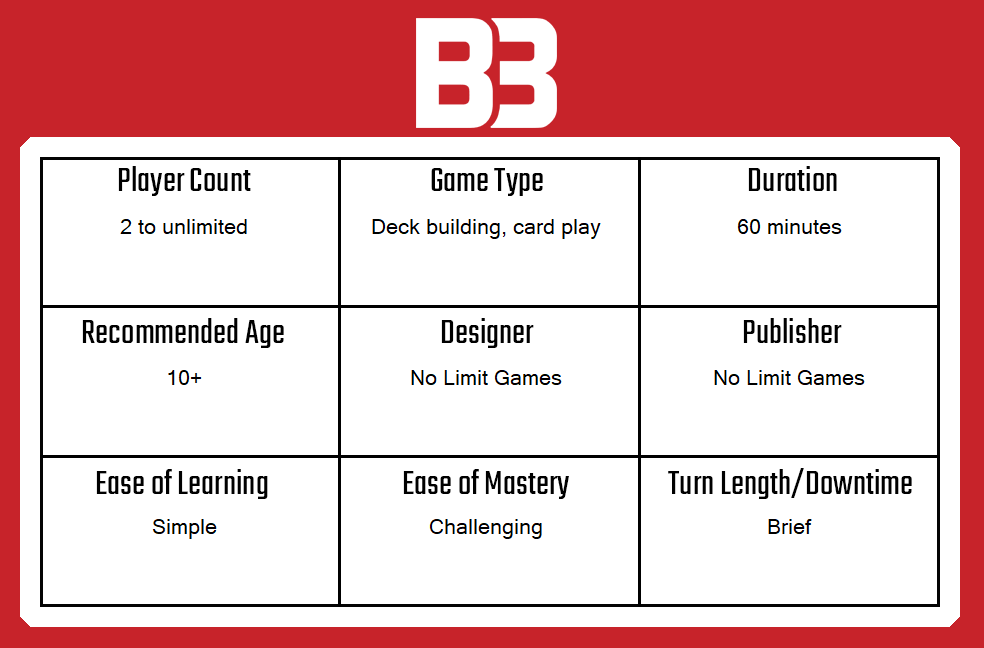 Full disclosure for this one, because Battle of Souls is currently live on Kickstarter and my copy arrived about a week ago, I’ve played perhaps seven or eight games of it, which isn’t as many as I would normally like for this kind of game. As such, let’s consider this a mini-review, rather than the more detail insight that we would normally provide.

Battle of Souls is effectively a competitive Limited Card Game (or LCG) in the style of the various similar series produced by Fantasy Flight Games. I say that because Battle of Souls will be released in sets (I’m reviewing the Samurai Set) one or two at a time, with the cards in each set being fully interchangeable.

However, where Battle of Souls differs from the LCG games is in its play structure, which is much more closely aligned to Trading Card Games (or TCG’s) like Magic: The Gathering and Yu-Gi-Oh. Specifically, the turn structure consists of two main phases either side of a battle phase, along with upkeep and cleanup phases which is more or less identical to Magic.

The element that will be familiar to Yu-Gi-Oh players is perhaps Battle of Souls most standout feature, which is the onboard upgrading of forces from one tier of warrior to the next, as the result of the outcome of battle. There are actually four tiers of warrior in the game, with the final one (Legendary rank) being quite challenging to reach. 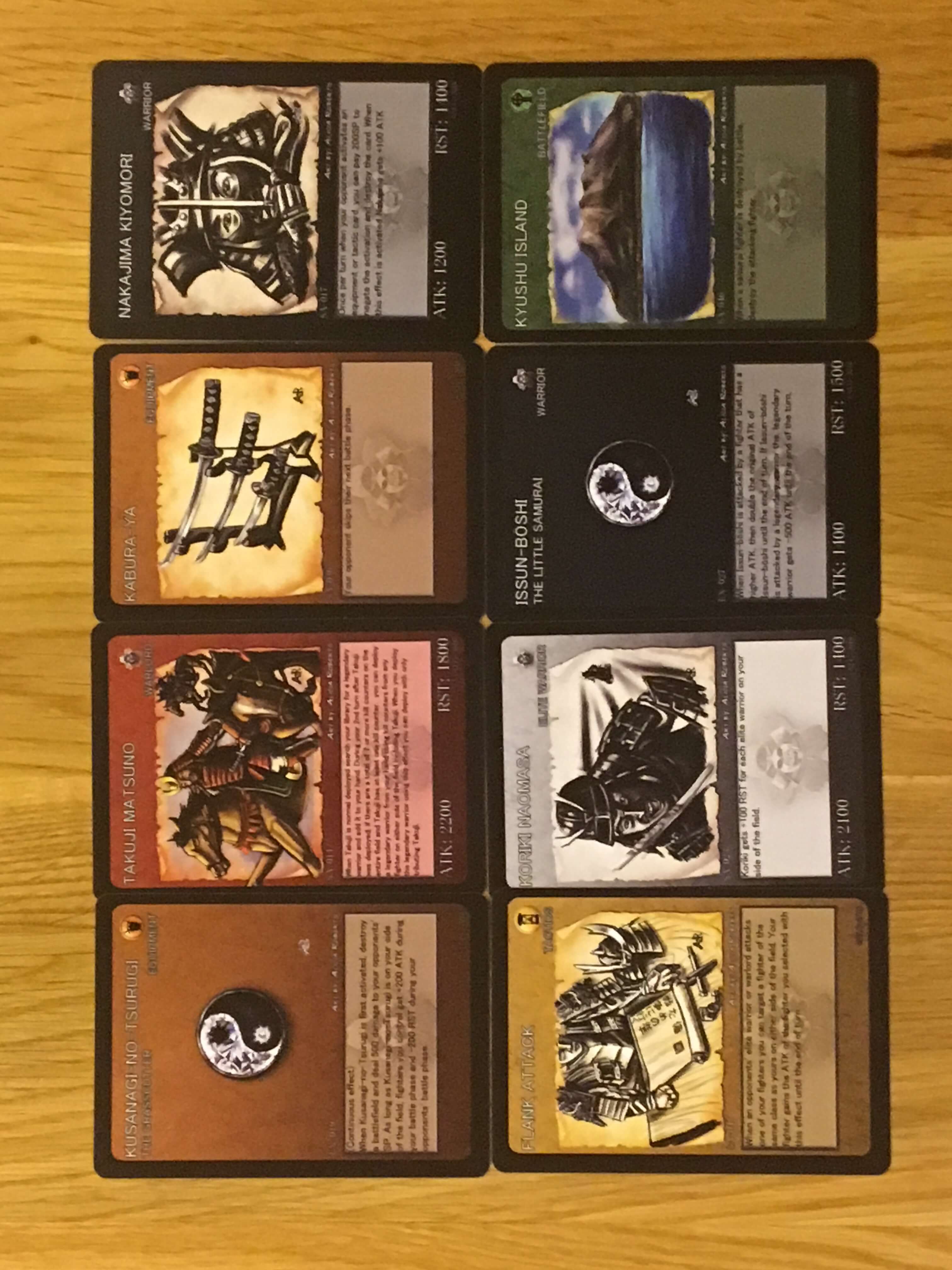 Battle of Souls is a relatively low budget game, so the components come with a few Cons, as well as several Pros. Most notably, you’re unlikely to be especially impressed by either the box or the instruction manual, which is currently just a very brief sheet, which is unfortunately lacking in a few details. I’m reasonably confident that if the Kickstarter succeeds, the manual will be improved and frankly, I’m not as bothered about the box as I am the content of it.

On that note, The Samurai Set among includes around 200 cards, whilst the Viking Set has a similar number. It’s also possible to buy a deluxe set that combines the two in one box, so you can fight thematic, historically impossible battles in the style of For Honor. The card quality is high, whilst the artwork is quite good given the low budget nature of the game, although each kind of combatant shares the same artwork, so there are many identical looking cards.

I should mention that whilst all warrior class cards (to use the most common example) look alike, their names and stats are usually different. This makes the warriors feel quite individual once you learn their names, even if they do all look the same in terms of artwork. The overwhelming majority of the artwork is by Alicia Roberts and it has a distinct, unique flavor that remains consistent throughout. 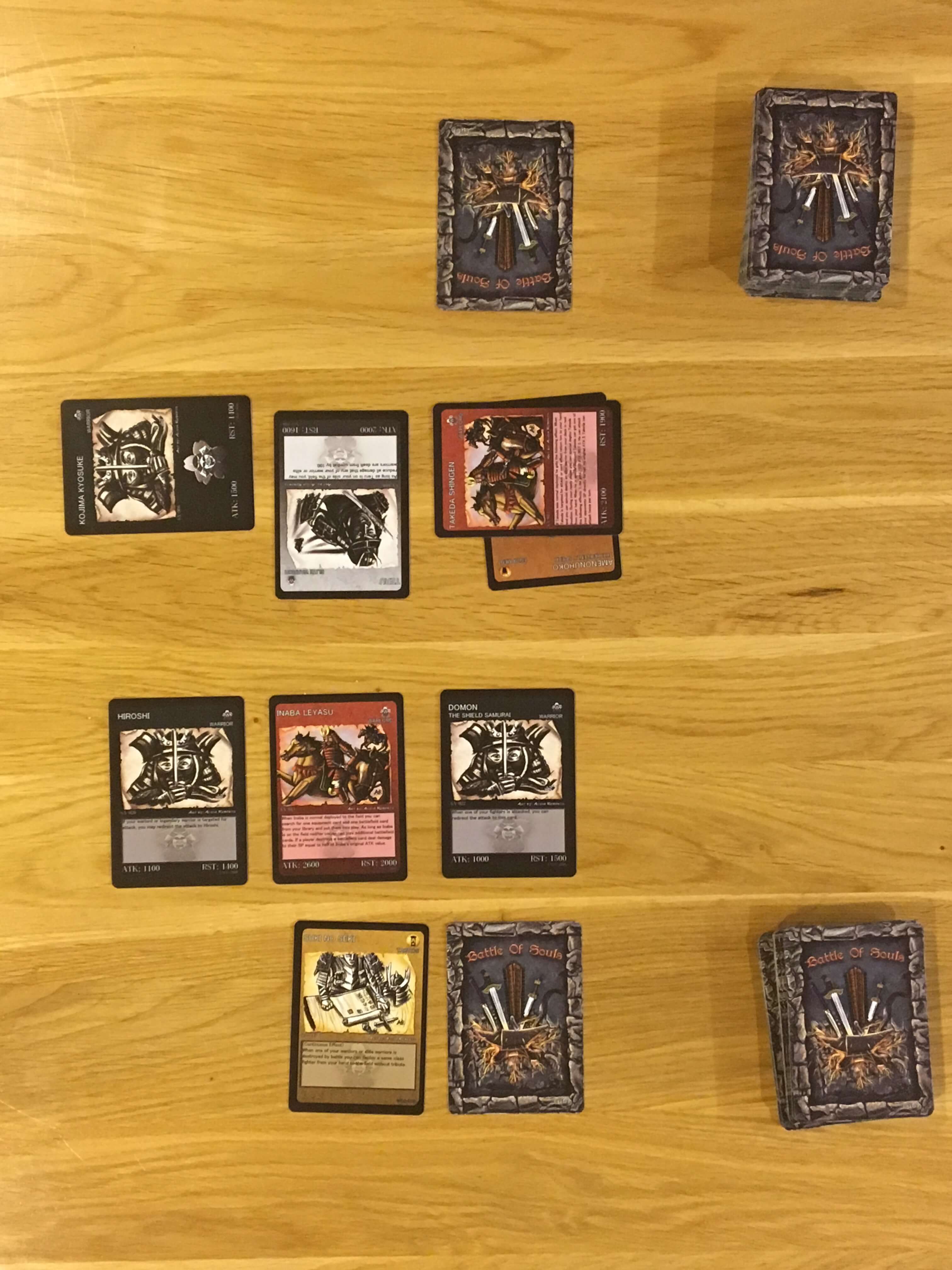 As I said earlier, Battle of Souls plays a lot like Magic, to anyone that is familiar. For those not aware, games like this are played in turns, with each player completing a set number of phases before passing to the next player. Some cards can be played out of the normal sequence in order to disrupt opponents plans, but otherwise the key interaction between players occurs during battle.

In Battle of Souls, each player begins with 8,000 life and must attack their opponent to reduce their life total, whilst increasing their own by the same amount. I have to admit that the manual isn’t absolutely clear on this point and I certainly found that some games were very protracted due to the way that health ebbed and flowed between the players, so it’s possible (likely even) that I’ve interpreted this rule incorrectly.

In any case, what is certain is that from their hand of five cards, each player will take turns to place a basic warrior, reset any of their characters that are currently in the rest position (turned sideways following an attack or other effect) and potentially do battle or deploy more powerful characters. When it comes up upgrading characters, the character to be upgraded must usually have defeated a set number of enemies (depicted by placing tokens on them) at which point, an Elite Warrior may be placed. 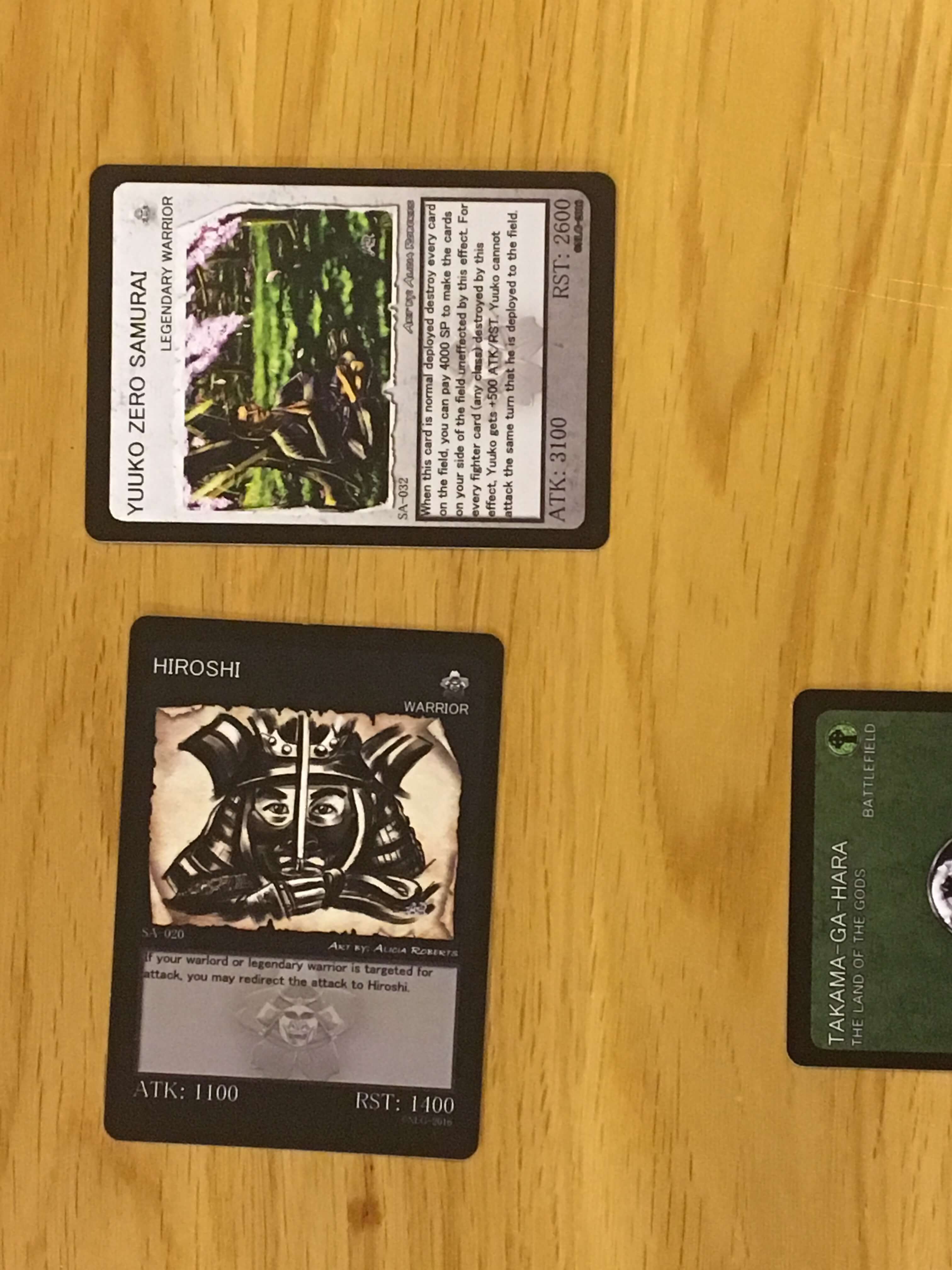 These upgraded warriors, in turn, can lead to Warlord and then Legendary Warrior upgrades. Some upgrades require the sacrifice of one or more previously upgraded and/or victorious warriors, but that is at least all clearly explained. In the same way as assembling your Blue Eyes Dragon in Yu-Gi-Oh is always quite a challenge, getting to legendary warrior status in Battle of Souls is quite an achievement and the battlefield prowess of the upgraded warriors reflects that.

During the battle phase, the active player chooses which of his warriors will challenge an opposing one. One area where Battle of Souls is also unique is that warriors can be attacked either when active or when resting, and each has a different combat value for each. In this way, some warriors are well rounded to both attack and be attacked, whilst others are better attackers, but poor at defending themselves when resting.

There are tactics, equipment and battlefield cards that all affect the outcome of individual battles, with equipment offering known benefits in different situations and tactics acting as ways to surprise your opponent into thinking that they have an upper hand when actually, they are walking into a trap. There is undoubtedly more subtlety to Battle of Souls than I’ll have uncovered, but I believe that I’ve conveyed the salient points here. 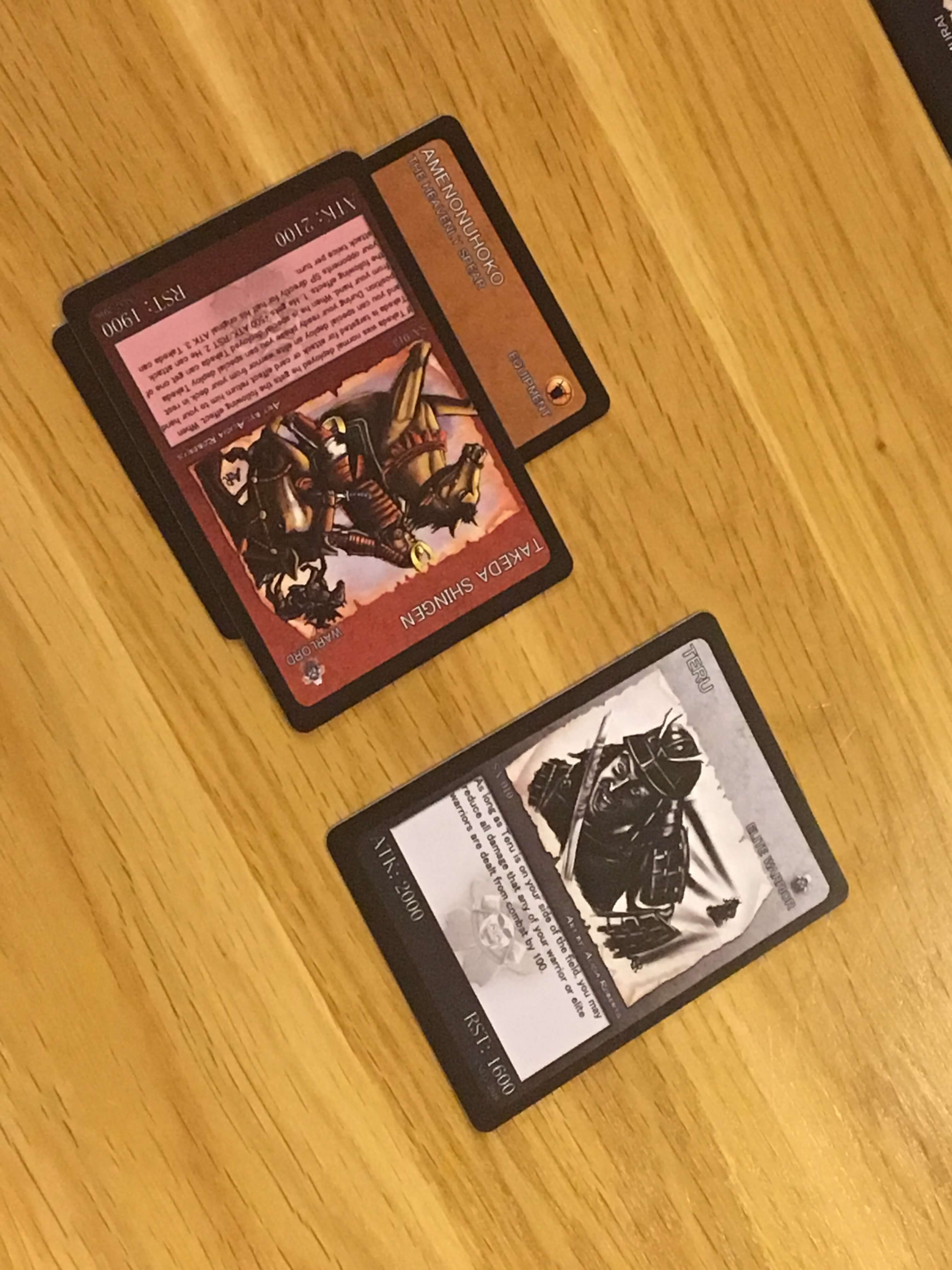 In wrapping up this mini review, I must resist the temptation to make an actual purchasing decision recommendation, whilst also accepting that I have rushed it to press in order to meet the closing of its Kickstarter campaign. In truth, Battle of Souls isn’t a game for everyone, but it is a very light footprint, self contained experience that is available at a low price point.

Regardless of all that stuff, as an experience, Battle of Souls is quite rewarding once you get past the initial rules blocker and overcome any fears about component quality. Games can be quite long, but with several warriors on the field and a constantly changing board state (players should be targeting a kill with every attack they make) the game remains tense and interesting at all times.

The ability to attack resting fighters and the need to protect valuable ones is ever present, whilst the upgrade mechanic is fairly rare and interesting. On the downside, I would like more art variety, but what is included in the game is of a good, individual standard. I’ll be spending a bit more time with Battle of Souls in the next few weeks and it has certainly interested me enough to want to explore it further.

A copy of Battle of Souls was provided for review purposes. You can find out more about it (and back the Kickstarter) by following the link here.