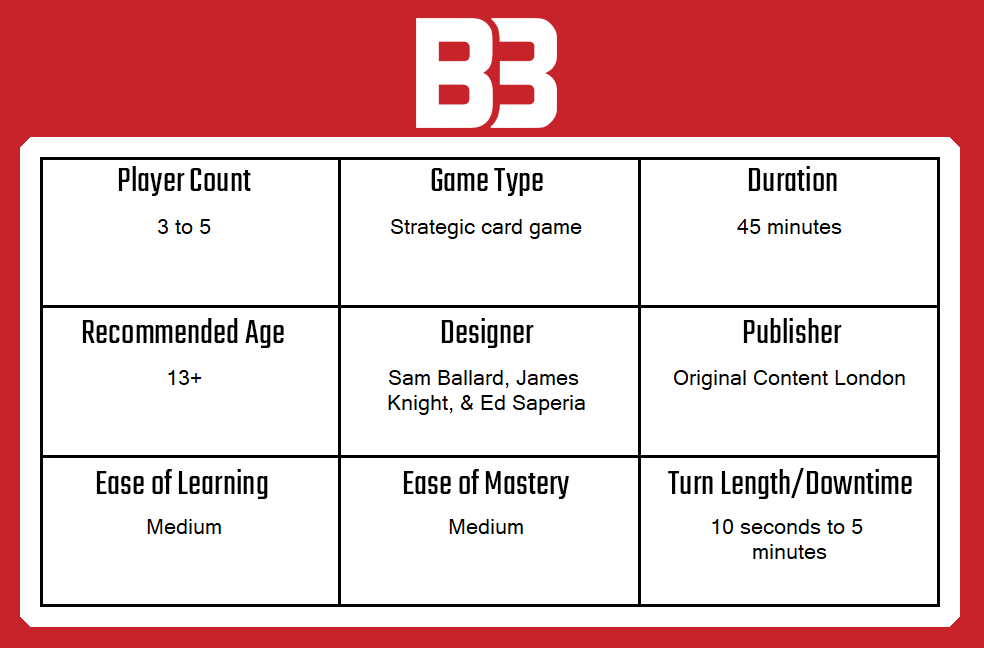 Band Manager: The Boardgame is a truly unique and fun experience — you and your friends decide to take on the world of music by becoming musicians. Once you have your passion and backstory, you start your trek to the top. Going on tours, practising in your mom’s basement, and teaming up together, will all help you make your dream of becoming the best musician possible, and the one with the most adoring fans.

On the back of a t-shirt, with a bunch of different colored pixel-art cards, you will embark on a fun quest to follow your dreams. You must work together with other players, but in a way that you still have your edge, and work to dominate later in the game. 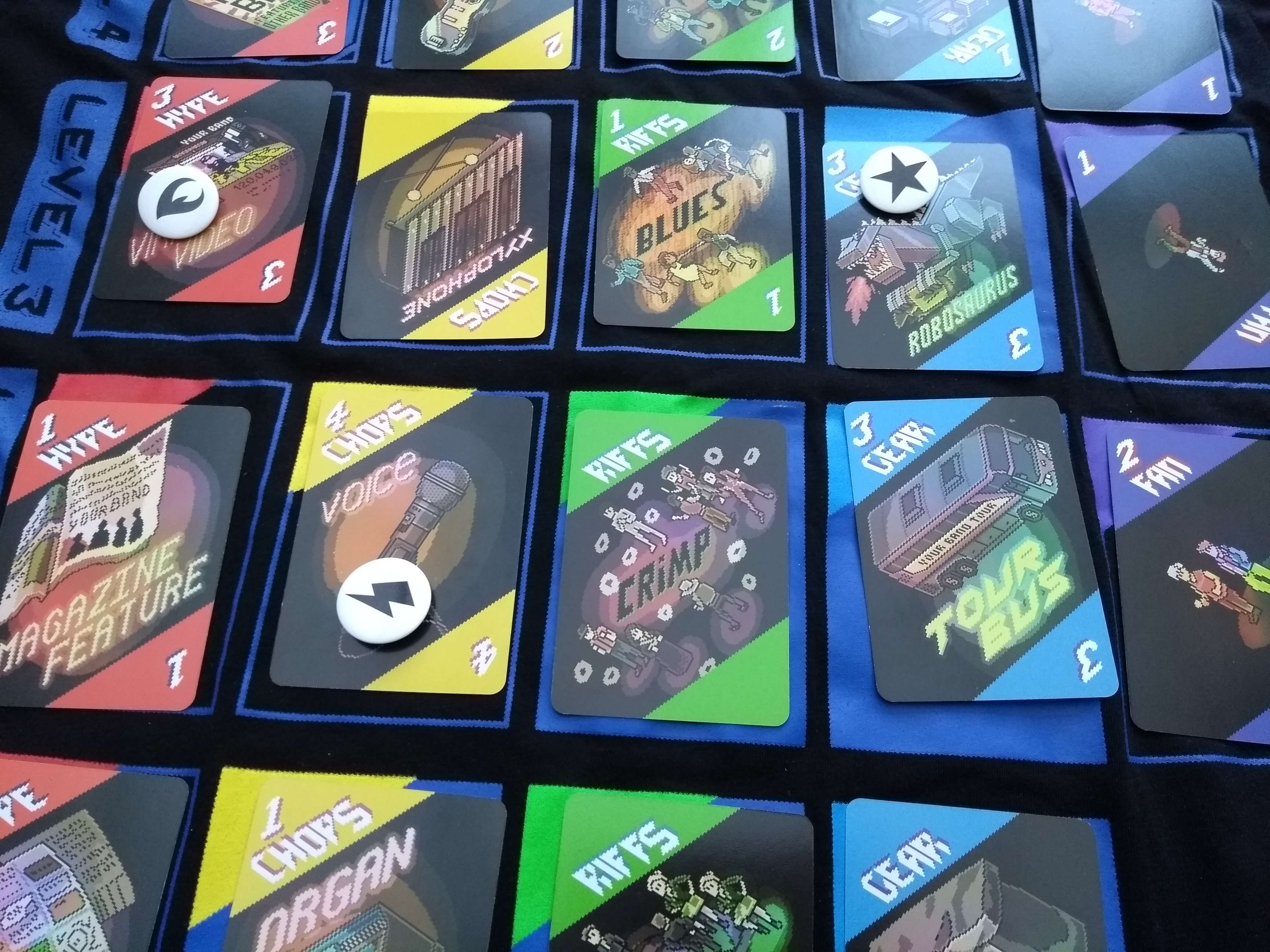 The game itself doesn’t have that many pieces, though each one is unique. The ‘board’ is the back of a beautifully branded t-shirt you lay across your table, making it something worthy of note. You also get pins with different shapes to represent yourself (and mark what cards you want to claim) as well as a lot of cards. There are tons of ‘Career’ cards (which are needed and do get cycled through during a game) as well as a stack of ‘Fan’ cards and a smaller stack of ‘passion’ cards. If you have the same version of the game that I have (the Kickstarter version, I believe) you will also have a stack of NSFW cards that can be thrown in.

Along with cards, pins, and a t-shirt, the game contains some stunning iron-on patches that can be used in a more complex version of the game. These assign each player a role and an ability that can be used when going on tour. 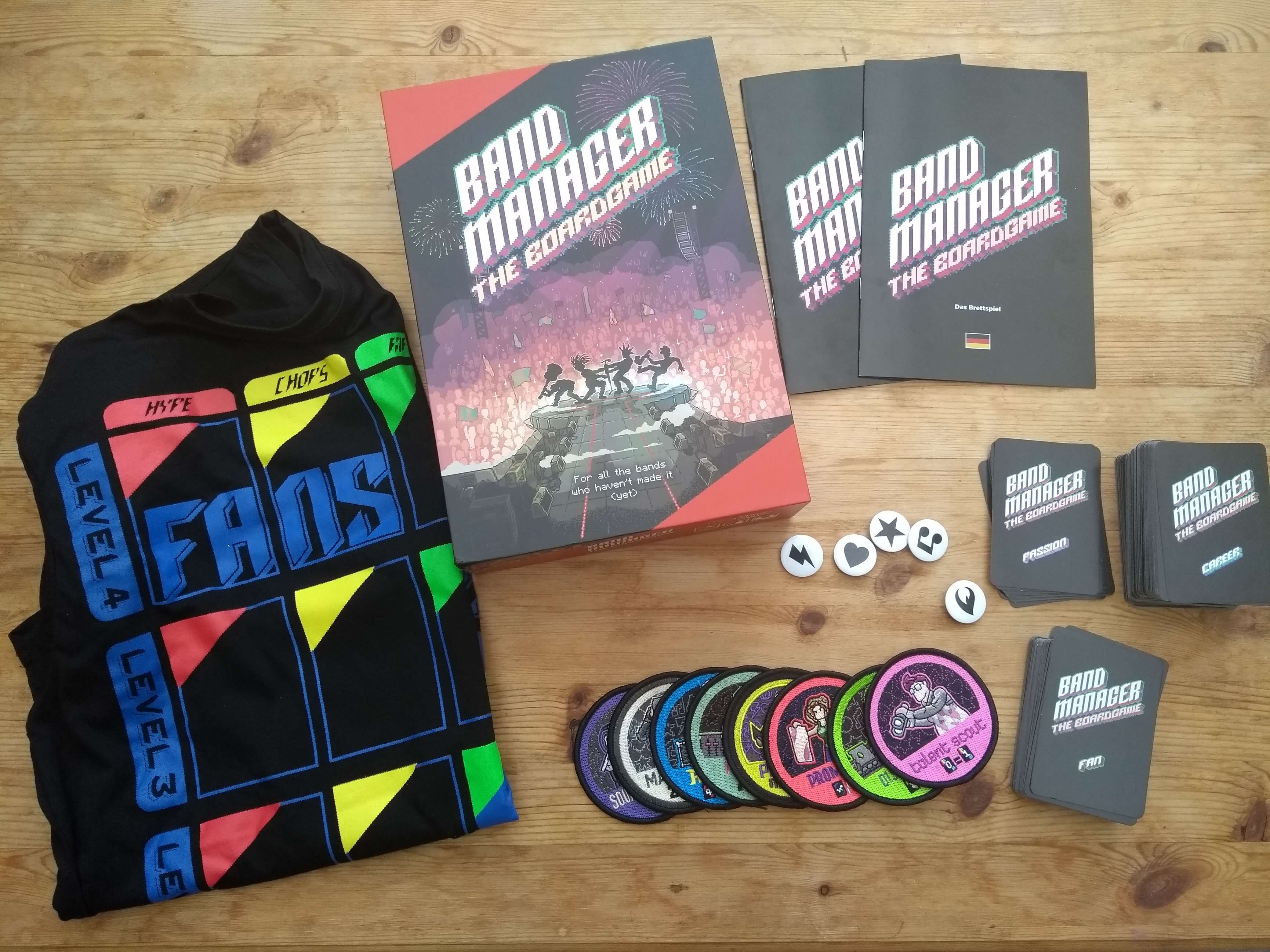 As mentioned, the game takes place on the back of a t-shirt. This t-shirt has different levels and colored card slots. To go on tour, each of the card slots in a level needs to be filled with the correct colored cards. You do not have to go on tour to take your turn, but this is an option.

When you go on tour, you must place your cards in the correct slot and see how much loot you have. At the start of the game, you have passion cards, which can be placed in any card slot (think of them like wildcards) — but you only have two of them. It takes 4 cards to do the most basic of tour, so you will need to team up with other players to make a complete band.

Teaming up is where a lot of the negotiation takes place — your friends can offer up a higher value colored card than you do to increase the loot (fan cards and career cards) made from the tour, however they may want something in return. The band manager (whoever is hosting the tour) will always get first pick of loot, however, the rest of the loot is cycled out between them and the other players that joined in on the tour. The person helping you out on your tour might want to claim one of the cards you’ve put down — and they can by placing their pin on a card in one of the colored rows. Each colored column can only have one pin it it, and the pins to the left get to pick a loot card before the pins to the right, so placement can be key in negotiation.

You can, of course, go on tours yourself and keep all your own loot — as long as you have all the required cards. Tours will also produce ‘Fan’ cards, depending on the level of the tour, column each card is in, and number listed on the card placed down. Fan cards are needed to complete higher level tours, however, you can also bank them for points. The first individual to 27 fans wins the game of Band Manager.

At the end of a tour, the manager of that round will need to trim down their hand to be just 7 cards — while everyone else can have an unlimited number until they manage a tour themselves.

If tours are too much for you, you can always opt to stay home and practice, gaining you a single ‘Career’ card. This way, you can build up your hand by only joining other player’s tours and collecting a single card on your tour. This is a very good way to do massive solo tours down the line, if you want to play the long game.

That’s basically it — you do your turn and keep your eyes out for good opportunities to join other bands and go on tour with them. Sometimes offering up a higher value card that is already on the board or convincing another player to not work with an individual can make all of the difference. 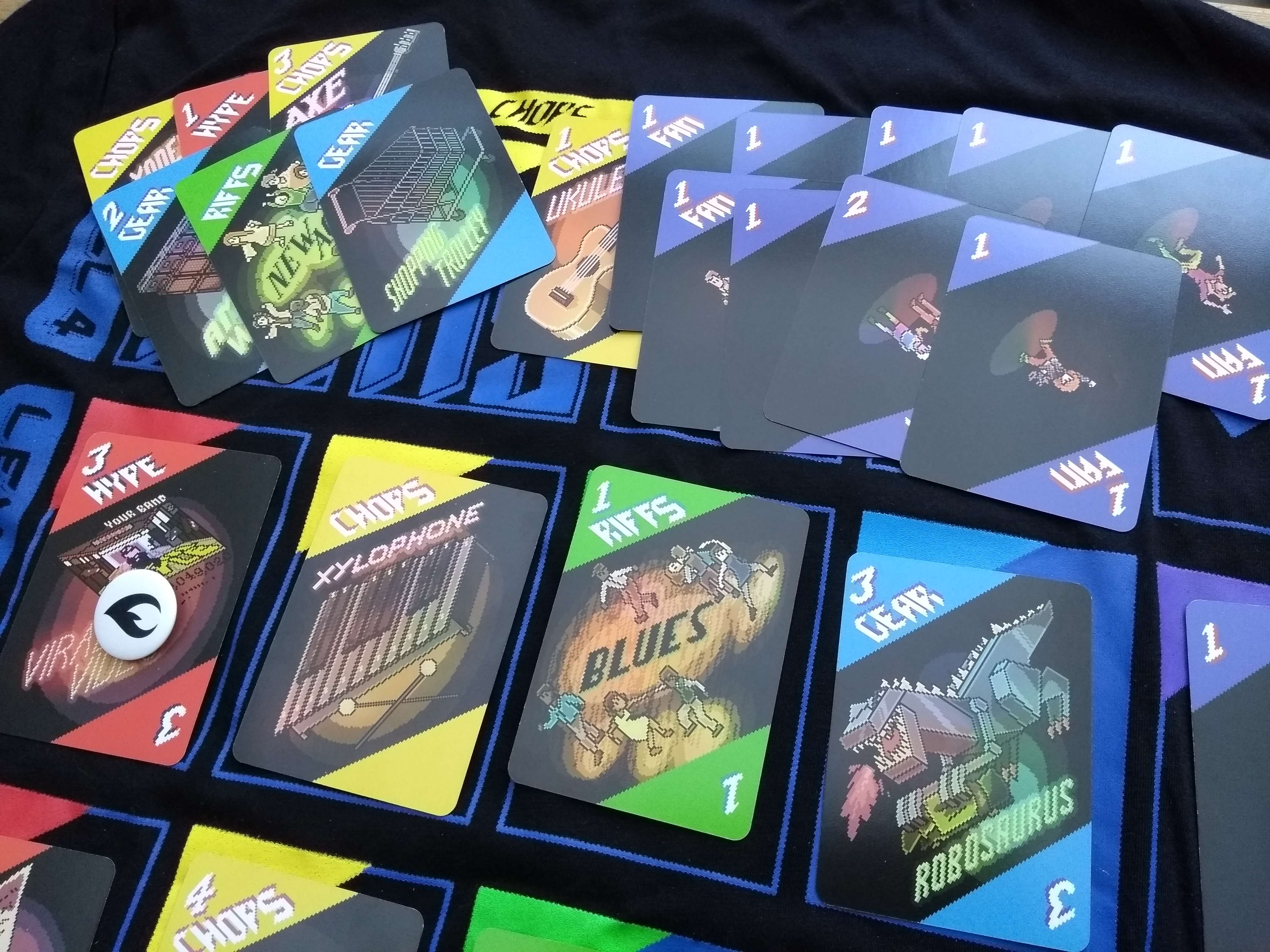 I found that in playing Band Manager: The Boardgame, the individuals you choose to play with make all the difference. Due to the amount of negotiation the game is built for you want to have some good and friendly faces to tour with. I really enjoyed playing with people who got into the story behind these bands. You start off with two passion cards at the beginning of the game and are told to use these cards to inspire a backstory. Every great musician has a backstory.

I found that players that referenced this story throughout the game (and in negotiations) made the experience so much better. They really did lean in and fully play the game.

Once you get playing, the rules are easy to understand and follow, although the rule book itself is hard to understand at times. I feel this is due to the way different aspects of the game are explained — sometimes referencing terms that aren’t defined earlier on in the book, so read it completely through a few times first, or risk playing the game incorrectly. The iron-on patches are not needed to play, but make a good bit of extra strategy when it comes to getting to more advanced matches (and again, they look so rad).

All of the cards make sense and look great as well — there is a good amount of balance in them. Each item is a smart choice and a talking point. Everything does indeed fit into the box, so if you’d rather pack away your t-shirt to just be played, that’s a perfectly doable idea. 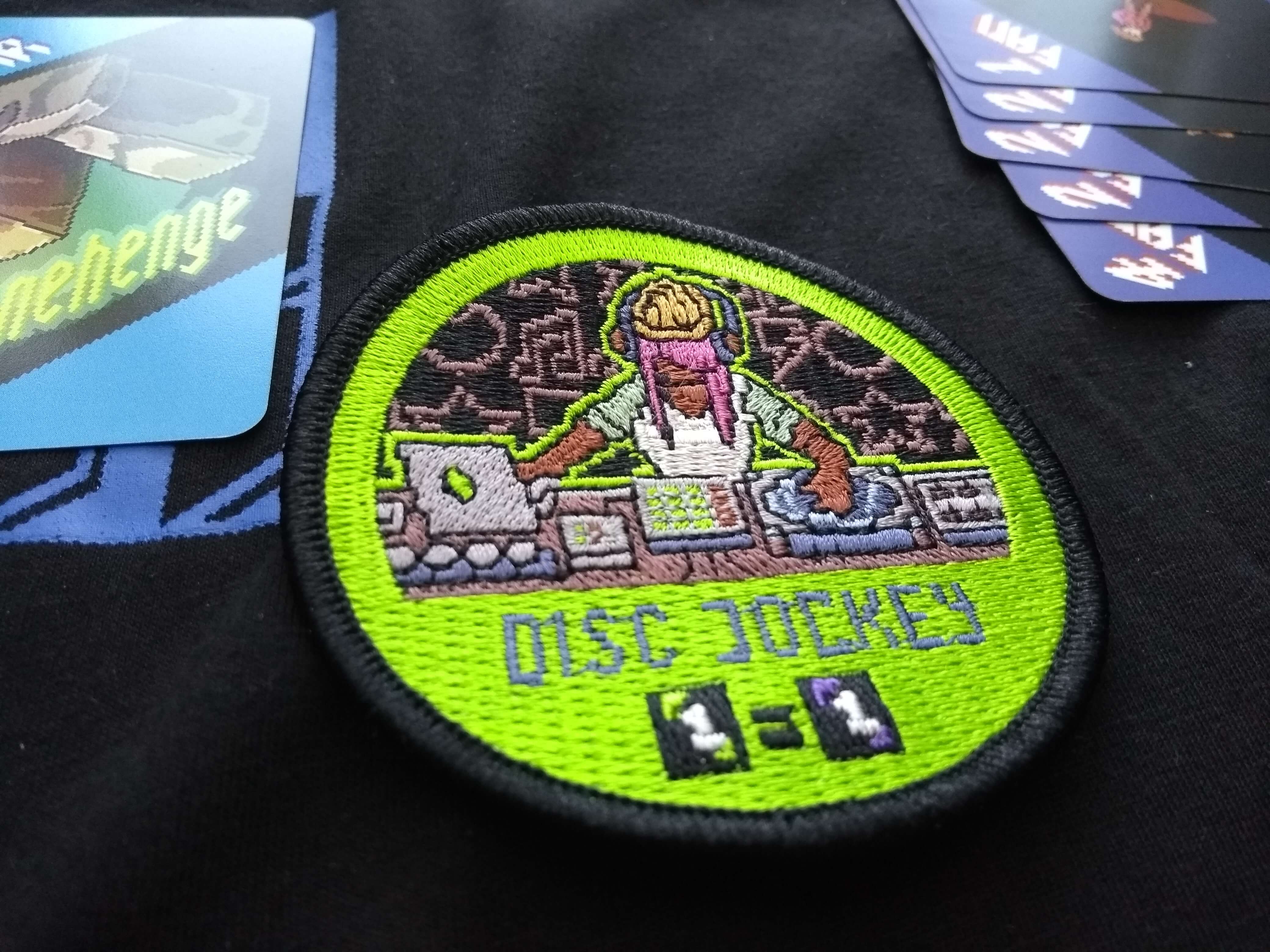 Band Manager: The Boardgame is a really great game. I enjoyed playing it – and will enjoy playing it in the future. I played with Jack Gill, who said “this game does negotiation right – and very few games do.” and I completely agree with this statement. The way the game is built, everyone must depend on each other at the start — making decisions and helping others out. But, at some point, that all changes and the game ends in a bang — with a musician breaking away and doing a massive tour on their own, gaining their own fans without compromise.

This ending is fantastic — it’s a great way to end a story and play such a unique game.

Mobsters — A prohibition take on an old classic