Given how obvious the idea is, I’m surprised that it took board game designers so long to adopt the idea of building out a Jurassic Park style dinosaur safari park. Only recently have we seen the likes of Dinosaur Island and Dinogenics really make the idea sing, but both of those are large, complex eurogames. What if it were possible to take about 90% of the fun and distill it down into a tiny, six inch square box? Well that’s exactly what Tiny Epic Dinosaurs does.

If you’re not familiar with the idea of a Tiny Epic game, then it might be worth checking out our review for Tiny Epic Quest, which takes the idea of a Legend of Zelda sized quest, and boils it down into about an hour of multiplayer fun. As I’ve already hinted, Tiny Epic Dinosaurs in which up to four players will compete to build the best dinosaur safari — and score the most points.

The way the game is presented is very straightforward, with each player taking two park boards and choosing one, then drawing a contract card and taking a selection of worker meeples in their chosen colour. The main board itself is actually made up of four large cards, placed in the appropriate side for the player count. 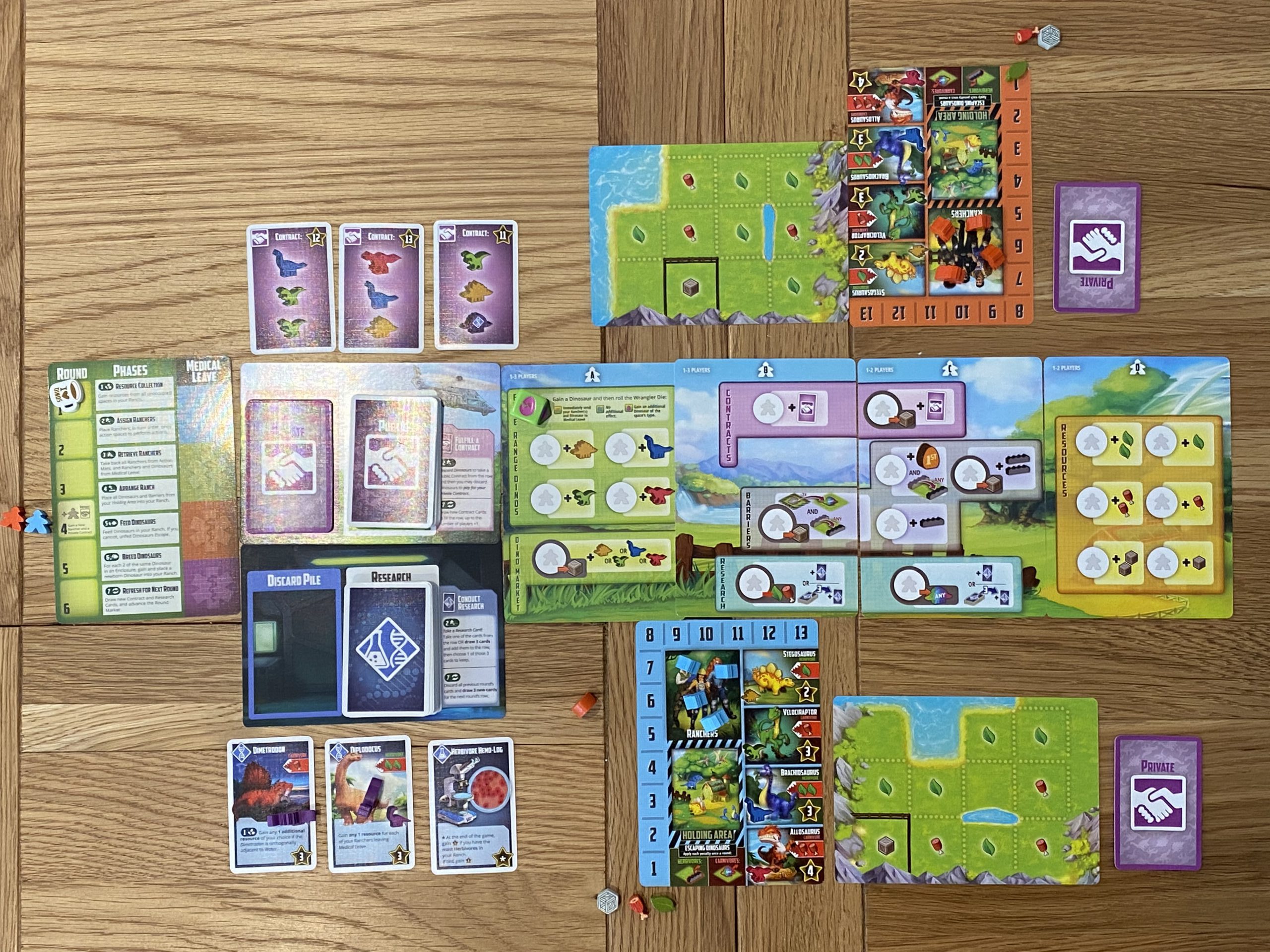 Alongside their chosen park card, each player will place a park status card and then a number of resource tokens which will be set to specific values depending on starting order. The resources available include plants, meat and supplies, with plants being the most common (or arguably least valuable) and supplies being the hardest to come by, and almost certainly the most valuable.

There are a few other things to do such as setting up a very handy round tracker that walks players through each round, and also setting aside an additional worker for each player to introduce during round 4, placing three science cards and laying out a number of contract cards equal to the number of players plus one.

The game then begins, and will take place over the course of six rounds, each comprising seven phases. If that sounds daunting, don’t be too put off — a number of these are very brief, and all but one can be completed simultaneously. Even on the first turn, for example, the first phase is simply to gather resources — which is done by each player looking at their park and taking plant, meat and supply resources equal to the number of icons shown (that are not covered by dinosaurs). 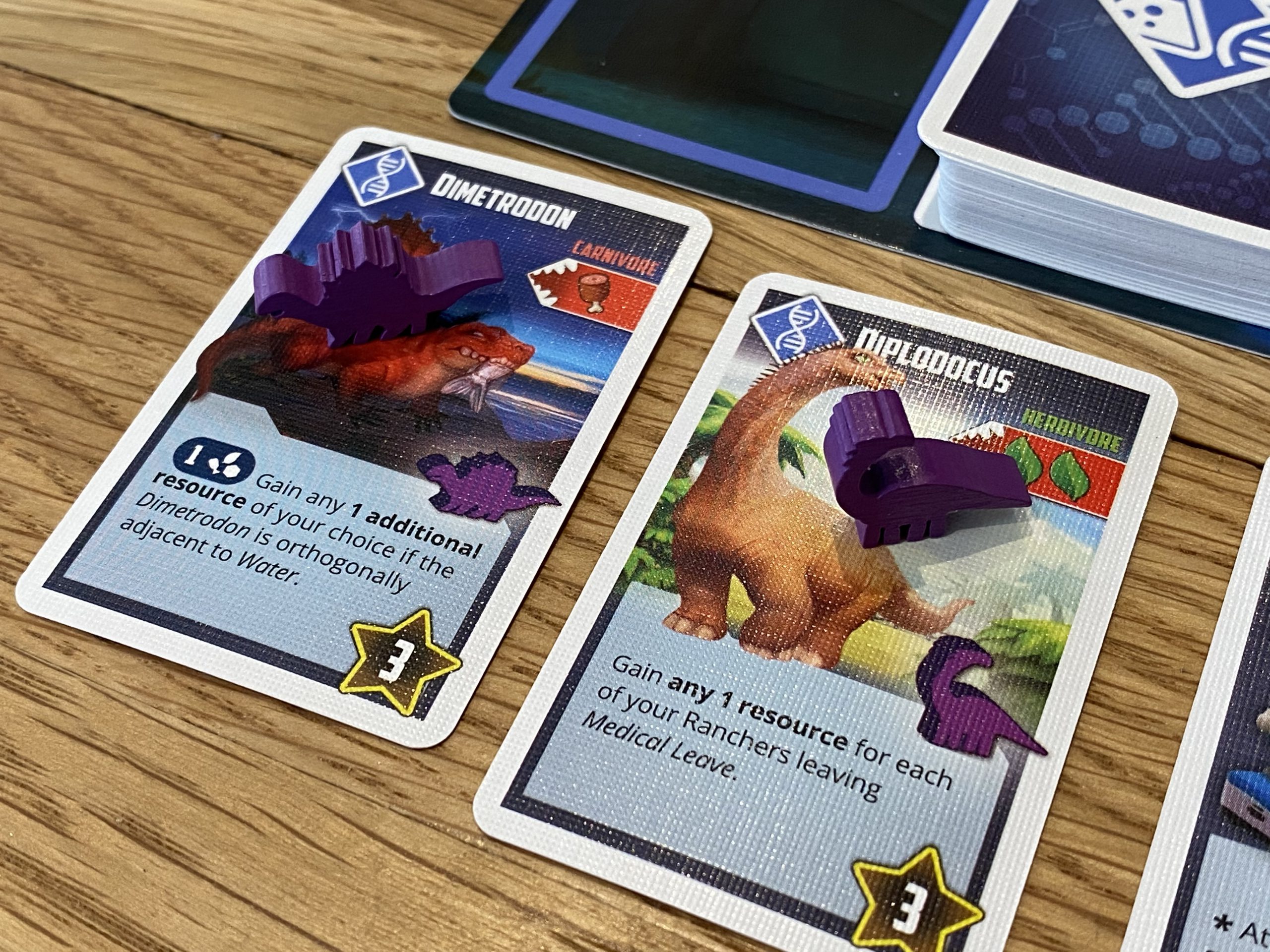 Whilst this worker placement is the meat of the game, it’s fairly straightforward and non-contentious, but there are some interesting choices. Ahead of the arranging, feeding and breeding steps, the players each need to consider what must be done — because if dinosaurs are not properly contained or fed, then they will escape, potentially killing other dinosaurs or destroying fencing in the process.

When you sit back and look at what this means for Tiny Epic Dinosaurs, you start to realise that this is kind of a game about engine building and maximising the efficiency of your ability to breed dinosaurs at a steady rate and then use them to fulfill contracts, since claiming dinos from one of the worker placement slots — wrangle free range dinos — costs an action that might otherwise be spent on getting food, fences, or powerful science cards. 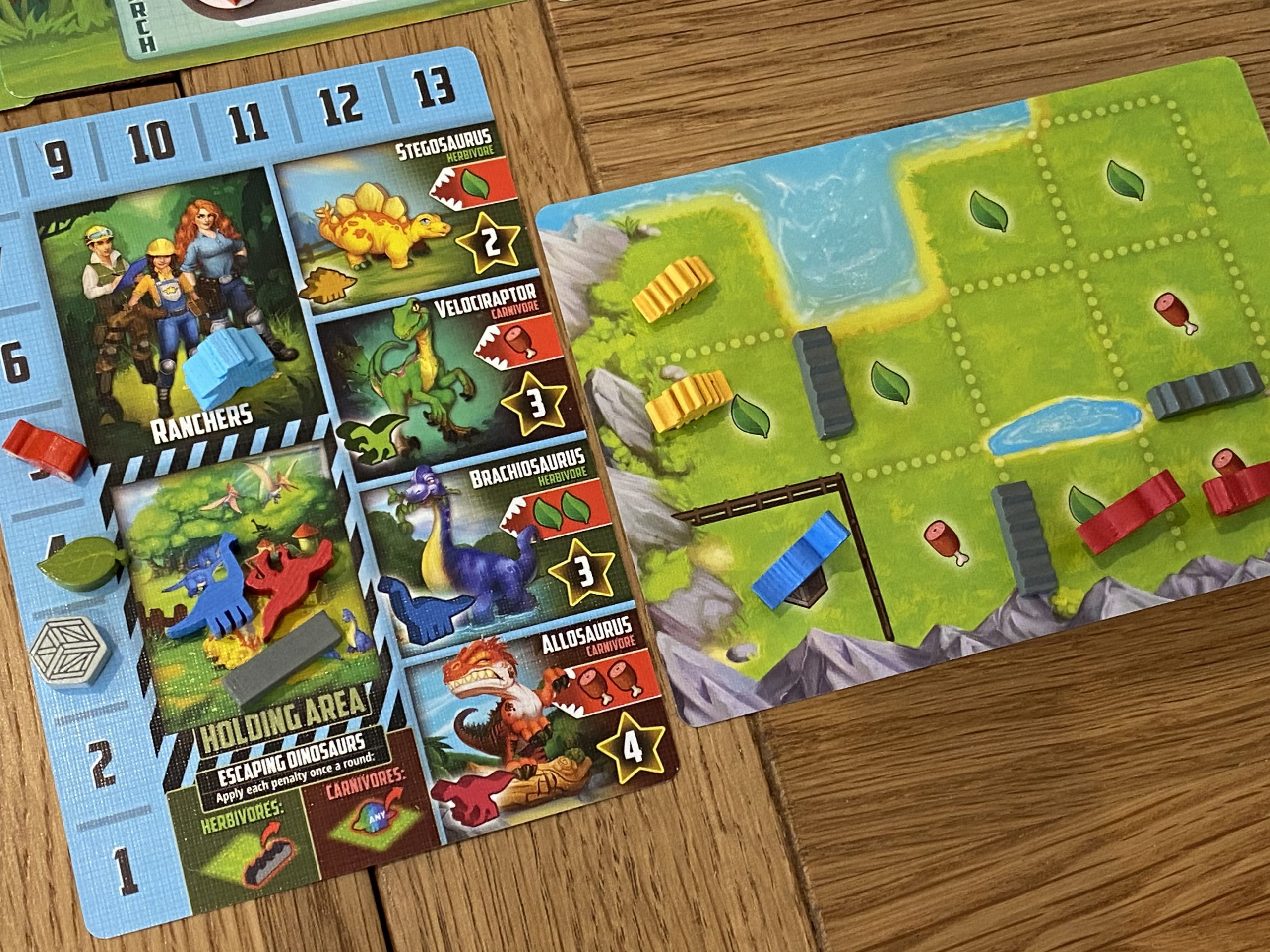 Every placement slot in Tiny Epic Dinosaurs is self-explanatory, and there are no slots here that require multiple workers. That said, one of the workers (or ranchers rather) that the players have is larger than the others, and this one can be used to displace a single meeple to reuse the same space if you like. There are no other consequences for either player, making Tiny Epic Dinosaurs one of the mildest worker placement games you’ll come across in terms of interaction.

So the idea is that you must collect enough barriers to be able to fence off sections of your park that are large enough to house two (or maybe three) dinosaurs, then breed two of them and in most cases, get the third one into the ranch safely, then ship it straight off to fulfill a contract. Come the end of the game, contract cards, dinosaurs in your park and special science cards will all be worth points, so whilst it’s important to keep things moving in this way, you don’t want to get yourself in a position where you have to rebuild your engine mid-game.

Science cards are an interesting twist on the normal ruleset, and because they provide both points and ways to enhance your engine, are very attractive. Whilst more than half of these cards offer bonuses to the way in which the park is built, or how dinosaurs are fed (or similar) a surprisingly large number of science cards feature unique dinosaurs like the Plesiosaurus or the Gallimimus. 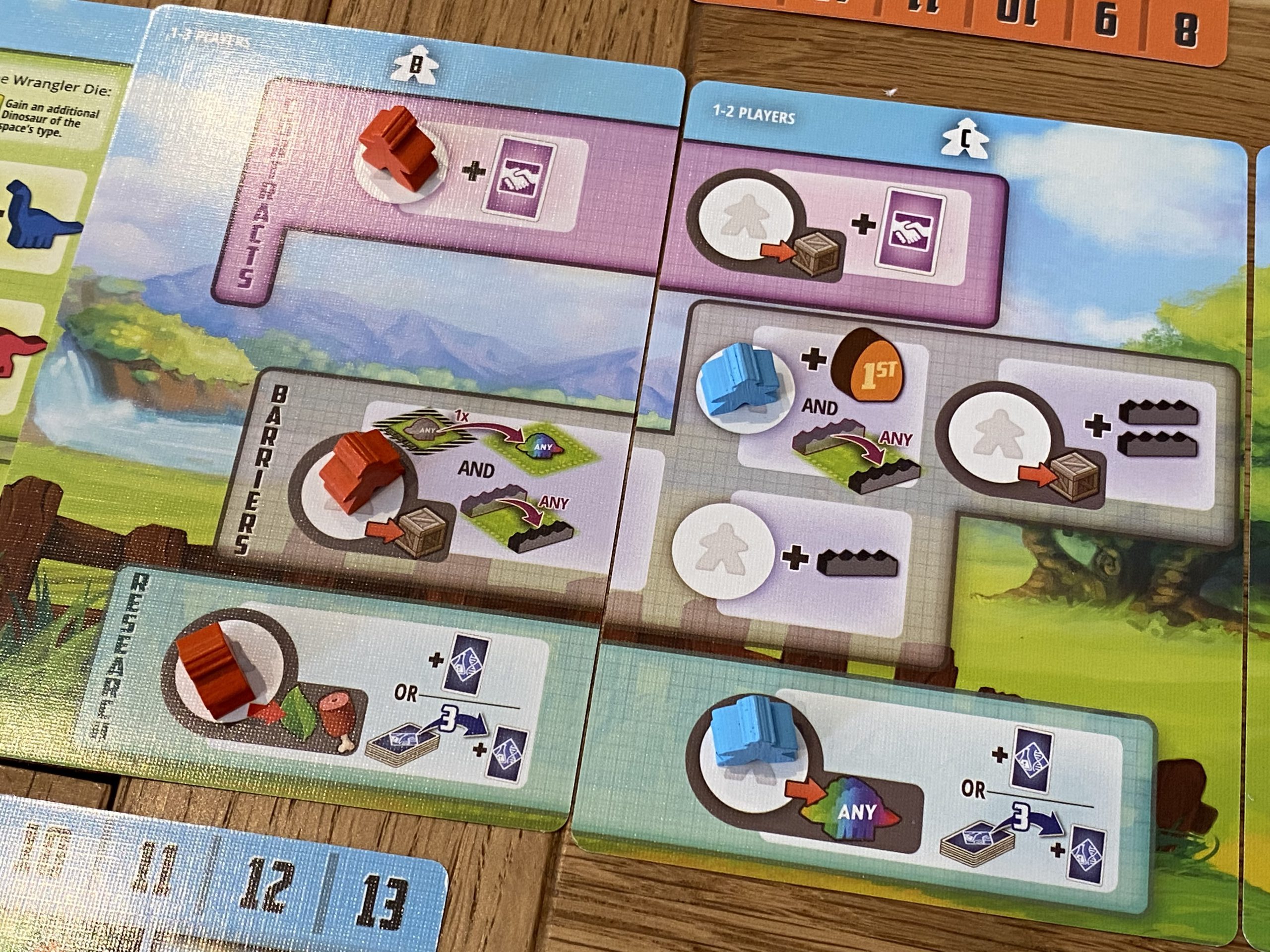 These unique dinosaurs have several benefits because whilst they can never breed, they tend not to require any form of enclosure and each one offers a unique benefit. The Pterodactyl, for example, can simply occupy the same space as any other dino, whilst the Plesiosaur generates those valuable supplies that I mentioned earlier. Whilst not all of these abilities make perfect sense, there is an element of theme here that I really like – and there’s no doubt that the unique dino meeples are among the best in the game.

Having called out those unique dinosaur meeples, I should take a moment to mention just how good the overall production for Tiny Epic Dinosaurs is, to be honest. Every dinosaur is represented by a meeple, with four base choices (Stegosaurus, Velociraptor, Bracchiosaurus and Allosaurus) and then the unique ones and they are just lovely. Add to that the lovely artwork and the fantastic card quality, and once again we have a Tiny Epic game that just nails it in terms of production.

Where the gameplay is concerned, Tiny Epic Dinosaurs is also quite a success. The worker placement aspect isn’t perfect, because it often feels a bit like multiplayer solitaire, but in terms of how each player will feel about their ranch – there’s a fantastic puzzle. It’s never as easy as you might think to house and feed all your dinosaurs whilst still ensuring you make progress and there are several strategies focused on either breeding, aiming for unique dinosaurs or mixing the two that work just as well as each other. 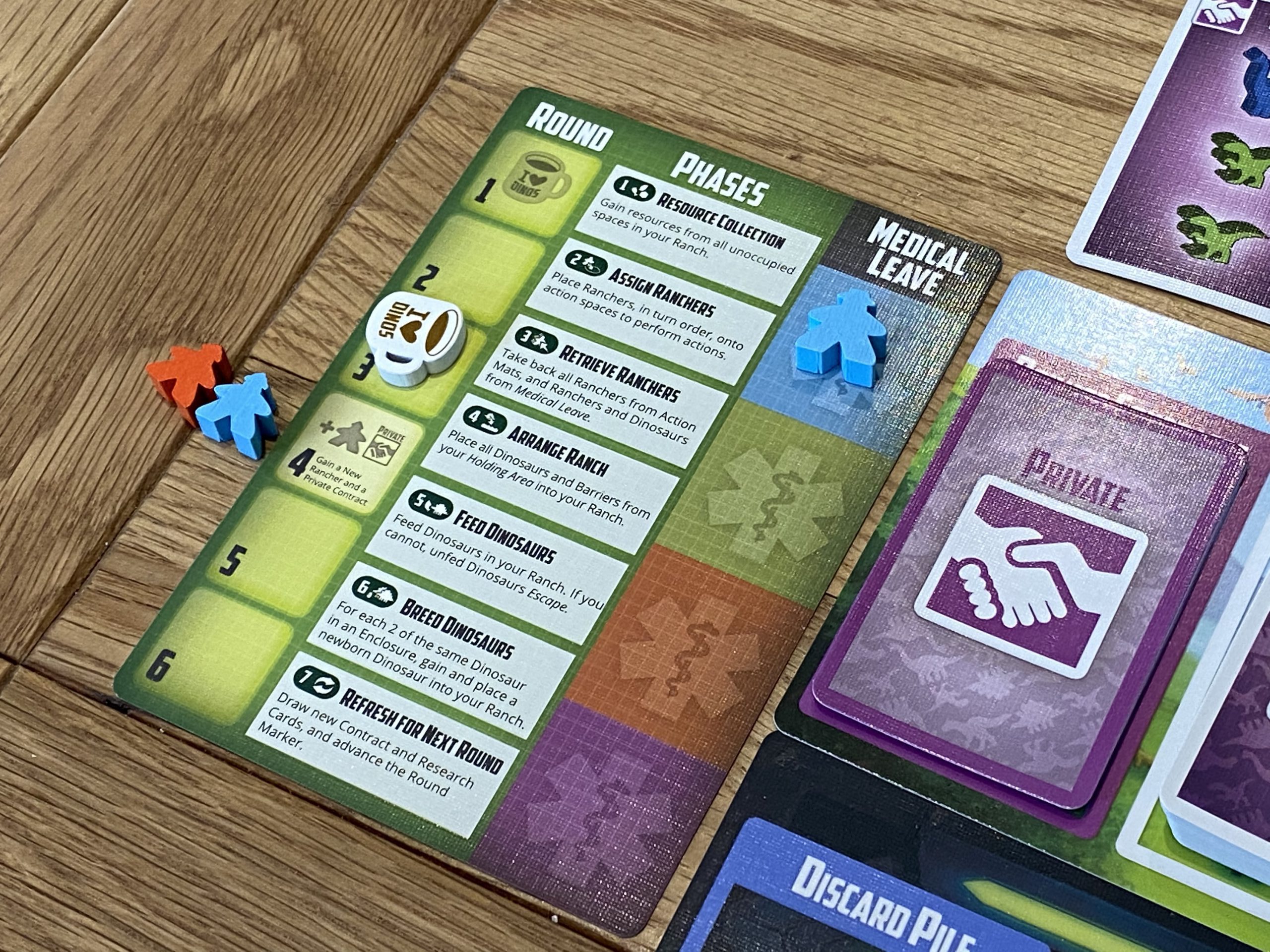 Given the diminutive size of Tiny Epic Dinosaurs, then you could forgive it some flaws, but you don’t actually have to. It is built to a fantastic standard and the gameplay itself, despite the minor issues I’ve called out, is very well balanced and enjoyable. Each game we played was tight and impossible to call towards the end, and the portable, brief nature of the thing makes it ideal for a lot of situations.

You can purchase Tiny Epic Dinosaurs on Amazon.