When the first gameplay trailers for Death Stranding surfaced, I was unmoved. I never really played a Hideo Kojima game, and all that I got from them was a bunch of fetch quests and weird stuff. I am now multiple hours into the game, and I finally understand the hype — while the game so far has been mostly moving stuff around, there is enough interesting stuff, story and occasional action piece to keep me going through like a Porter.

And once you look close enough into the game, you start to realize Death Stranding is all about moving and movement. 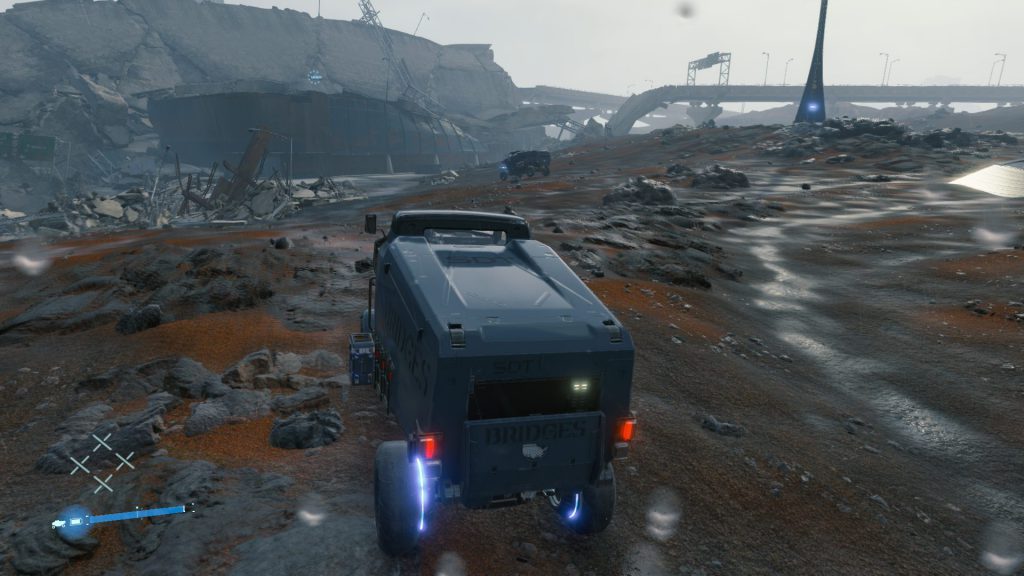 This is the most obvious one. In Death Stranding the player controls a porter, which is just a fancy word for a courier. The most basic mechanic of the game is about moving from point A to point B while carrying some stuff. In other games this would be as simple as pressing W for three minutes while occasionally moving the mouse to steer and jumping.

But Death Stranding went all in.

Each package on Sam’s body has a certain size and weight, and changes his center of balance. Too many heavy things on one side and running is almost impossible as Norman Reedus will lose his balance and keep tripping. Moving forwards is hard without moving packages around your body. 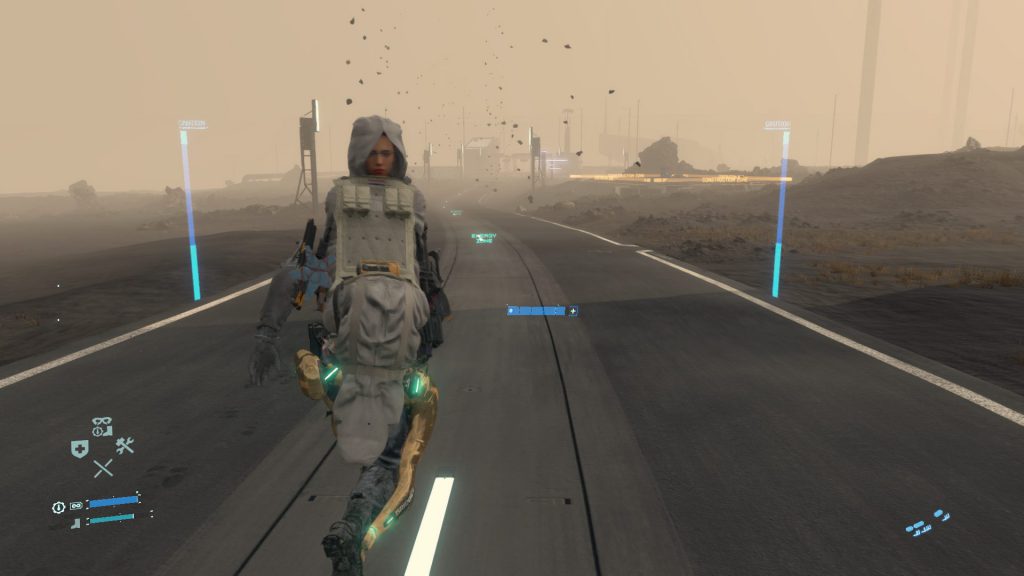 But even with cargo placed in the best way possible by the game there are still pitfalls — both literal and metaphorical. Higher mass means more momentum, and if the hill you’re going down is too steep Sam might not have enough time to stop, and will tumble all the way down scattering packages all around. Even with tools such as ladders and ropes you will inevitably fall down a ravine and will have to try to find a way out.

And as the game goes on, there is more stuff to be moved, between more location, and with more constraints. Some items are fragile, some need to get to the destination ASAP, and some are both and also a mushroom pizza that you need to keep the right side up. But the amount of tools needed also increases, making moving the cargo around the body even more important.

Death Stranding takes place in a post-apocalyptic America. The titular Death Stranding went and screwed up a lot of things, created a rain that ages things it touches, killed a lot of people, and made the bodies explode in a giant radius creating weird monsters called BTs.

So naturally, the survivors started hiding in the giant cities and personal bunkers, holding on to whatever helped them survive. For some it was literal resources they hoarded, but for others it was mementos of close ones that died. The whole country with broken spirits and broken connections between cities.

But the hope has not died — there were still people trying to keep the country together and create a new nation. There was the last president of the United States of America, and there is her daughter, Amelie, that went across the country trying to connect people. And now there is Sam, following in Amelie’s footsteps, and going from city to city, adding them to the chiral network.

And giving them hope for the future.

That hope takes many forms. For some, a delivery of weapons means no longer fearing for their lives. For others, Sam literally brings together couples that thought the other was dead — they now no longer need to hold to the past, but instead look to the future. 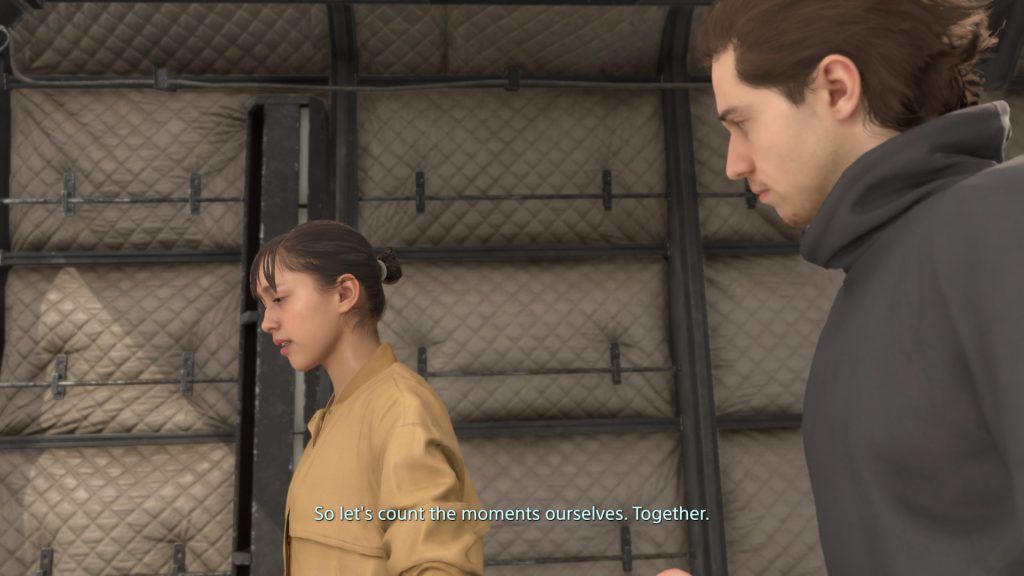 When Hideo Kojima explained that Death Stranding is a Strand game, no one knew what it meant. But now, we know that the game is also all about connections — like strands of rope we are connected to one another, and mechanically it means there are a lot of porters travelling the same roads as we are.

This is shown through structures that the player can build — if connected to the internet, they will also show for other players. On my playthrough I often used safehouses built by other Sams, and grabbed resources from there to build roads that in turn could be used by them. The more popular routes are sprinkled with signs signifying the location of enemies or simply cheering you on.

For a while I played alone (on account of being in the middle of a forest), and the world truly felt bleak and lonely. I drove on empty roads between two points with nothing else to do. But once I could access the internet the whole vibe changed. There were signs to like and vehicles strewn about ready to be used if needed. I wasn’t alone anymore. 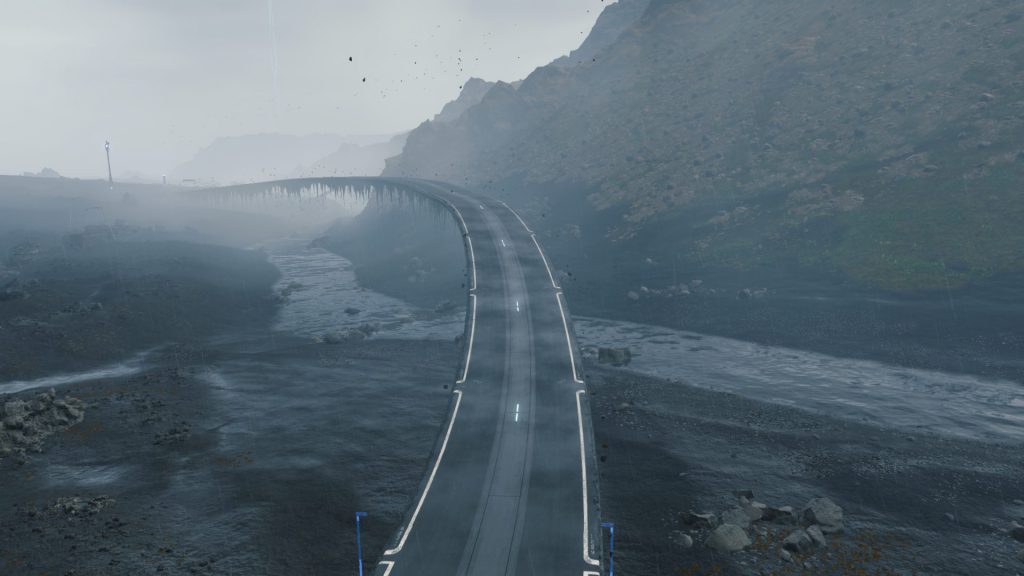 Moving everything at once

This is a bit lighter, and something we’re all guilty of. Every time we return from the store we want to grab every single bag in one trip, regardless of how heavy they are and how many there are of them. Well, Death Stranding isn’t much different from that. Especially at the beginning, there are often times where Sam is putting on massive amounts of packages, just because the player doesn’t want to go back and forth multiple times.

Thankfully after some time the player gets access to vehicles, which means no longer going at a snail’s pace with twelve packages of resin on your back — now Norman Reedus can go at a normal speed, only slowing to a halt once off the bike or the truck.

Death Stranding is available on Steam and PS4.