Scratching and scuttering sounds echo through the creaking ruins that make up the Olethros space hulk; as a Librarian commanding a squad of the Deathwing of the Dark Angels Chapter you must lead the way through the ruins, a nearly immovable object versus a nigh unstoppable force.

Space Hulk, unlike most of the various products that build up to complete the Warhammer 40’000 canon, is something I’m very familiar with; I’ve played the board game (albeit not the first, 1989 edition), as well as at least five different computerised versions, including two mobile ones.

Space Hulk classic, unlike this outing, is a slow, tactical affair and one best played with your terminator squad (the toughest of the tough), carefully leap-frogging one-another down tight hallways, covering and deploying overwatch like an overly cautious XCOM: Enemy Unknown player. Victory is tough, a careful creep up long hallways against seemingly endless genestealers, hoping that your covering fire will be effective enough to cover your squad as the terminators carefully time reloads. 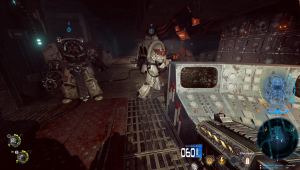 Space Hulk: Deathwing is, surprisingly, not very much like that however; its tactical options are stripped down, in single-player, to an order wheel, and in multiplayer to… where you stand? Not that this is a bad thing; SH:D may not be like the board game it takes its name from, but it is a pretty good multiplayer horde game.

The ‘horde game’ element that I refer to, would be its contemporaries in Left 4 Dead, Vermintide, Alien Swarm, Sven Co-op, and Contamination; you push forward to an objective point, a wave of enemies trigger as you then defend or rush the next target. Resources are scarce, and you can be easily overwhelmed if you don’t stay focused. Each of these titles are, including Deathwing, single-player however vastly better in multiplayer.

That’s not to say that the Deathwing story is bad, it isn’t. Much like most Warhammer 40k stuff however it is a combination of misery, corrupted Latin, and grim refusal to call a suicide mission by what it is, nor give it the satisfaction of earning its name. 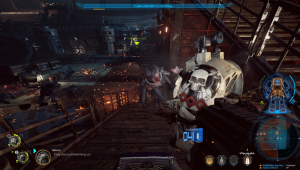 The 9-level (at about an hour long each) single-player campaign has you embarking throughout the Olethros space hulk as a librarian – not the swotty, bookish type, but a ‘psy’ wielding, iron-clad powerhouse, and one who is in charge of two other space marines, a healer and ‘technical’. There’s a minimal instruction wheel which lets you move around your associates (or just tell them to follow you), or boss around your healer. Otherwise it’s a classic first person shooter, one with squishy enemies trying to overwhelm your position as you empty rounds and cartridges into the hordes.

Multiplayer/Co-operative however rips out the two AIs, takes away your super-suit and instead lets you pick from five classes to tread almost the same route, but with up to four human players, and a somewhat more streamlined campaign.

It’s an interesting switcheroo, in the single-player your librarian character can level up through finding relics or finishing levels; it’s a simple affair, with two passive ability trees, and one ‘PSY’ tree that gives you a few more magic-esque attacks. But, the extra gun, and adaptability of humans when it comes to wave defence certainly outweighs that.

As an entry into Warhammer 40k’s setting it’s fantastic; each part of the hulk has had a massive amount of effort go into its visual design; chapels and dormitories, as well as endless service tunnels all look worn, ruined, or both. The layout, and detail, of some of the rooms that play host to the game’s set-pieces are absolutely fantastic; the developers have also made great use of UE4’s lighting features, something especially noticeable due to the nature of the setting.

To juxtapose this, however, the genestealers, as well as a few of the wall textures look a lot weaker up close. Genestealer models are repetitive, and with the mass of them that come at you, you just end up with mounds of ragdoll corpses lying in your way – pushed aside weightlessly as you careen past them. Later as other enemy types are added, they too share models, there’s nothing to really tell any of them apart, which feels a bit of a shame.

The strange weightlessness isn’t just there either, ballistic weapons have no recoil, and enemies barely react to gunshots, which gives ranged combat against them a numb feeling. That said, when you do get to the more powerful, plasma weapons, and the enemies spend a bit more time exploding into gibs instead of flaccidly collapsing to the floor the guns do feel more powerful.

Melee weapons are where the game shines, saber, mace, hammer, and fist (among others) all feel excellent against enemies, and feel like they have some real weight behind them – it’s the only time when the weightlessness of corpses feels appropriate as a matter of fact – that is, when they’re not exploding into chunks.

The level layouts are fairly open, with the tunnel networks looping back on themselves, or leading through into more majestic rooms, be that in scale or design. The ships that make up the core of the hulk are still mostly powered, and so hacking doors, and activating turrets are an option as you fight your way through the ships. You can also just smash through doors, which is pretty fun, although the broken weak-walls and doorways are one of the points that I mentioned earlier, where the textures and lighting suddenly falter.

That said, those areas are on the fix list for the developers, however at time of play they stuck out abruptly, and it did take a little from the otherwise excellent visuals.

There’s a few odd mechanics thrown into the mix as well, which certainly help it stand out from its contemporaries, however do feel a little bit odd. As your character is a big ol’ mound of steel you’re understandably going to be tough to fell. In, what I take to be, reaction to that the developers decided to include limb specific damage zones on the characters. This is something that would make a lot of sense if you were against ranged enemies, however when most of your enemies are simply bludgeons bee-lining, or tiny little chaos monks peppering you with bullets the mechanic seems a little misplaced. 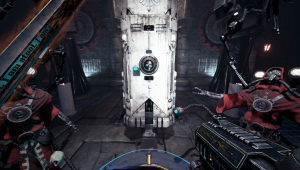 The other thing is Psy Portals, these are limited use portals that can be summoned up when you wish. These portals whisk you away to a safe area where you are instantly healed fully and able to restock and change your load-out. While very useful if your medic has fallen, or you let a few too many enemies past your watchful gaze,  the fact they can be summoned anywhere makes them almost feel like you’re keying in a cheat-code rather than taking a much-needed rest. I would hope that in future they are made so that they can only be used at certain locations or after certain milestones, not that it really ruins the game, it just feels a little bit cheaper than it could.

Anyway, I digress. You’d think from reading this review that I didn’t enjoy my time with the game; I actually really did, the scale and design of most of the levels were exceptional, and I certainly hold what I saw in the ruined halls as a canon interpretation of the setting. 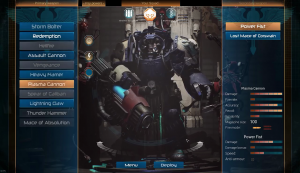 Unlike a lot of the user reviews I’ve seen on the store page from the beta, I had no slow down or FPS issues, and I’m running a dusty, old GTX780. That said, there was said to have been issues with AMD cards in the early days, although developer notes do state that they’ve been fixed.

Fans of Warhammer 40k, and fans of pulpy shooters, will find a lot of joy in this title regardless of the mechanics I’ve mentioned; and anybody who is looking for another co-operative shooter to rush through with friends will hardly have time to stop and stare at the textures. Is it a good buy for any of those people? Yes, it’s a brilliant buy.

Space Hulk: Deathwing is available now on PC, and will be launching on Xbox One & PS4 later this year.