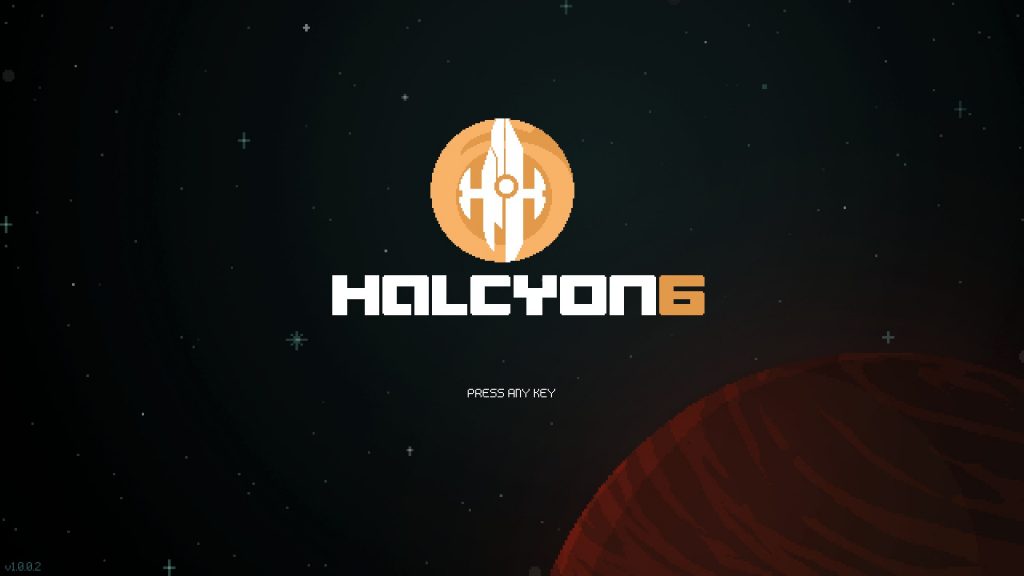 “On the edge of Terran space lies Halcyon 6, a derelict starbase left behind by a mysterious precursor race. Your mission is to reclaim the derelict station and rebuild it.”

In the write up for Halcyon 6 on Steam, it says that the game features Base Building, Exploration, Crew Management, Deep Tactical Combat and Story Telling… so I wasn’t really sure what to expect when I first fired up this game by Massive Damage. Sure, I’d watched the videos and seen the screenshots, and it all sounded quite interesting, but I was skeptical how a game could be about so many things at the same time. The question is, would this game be some sort of Frankenstein’s Monster and not actually succeed properly in any one thing? Spoiler: Nope!

There’s a starman waiting in the sky

After choosing from one of 5 difficulty levels the game starts off with an intro explaining that, in short, your space station (Halcyon 6) is an alien artifact that has been colonised by the Terran race. There is a garbled message from the Terran homeland and your entire fleet goes off to find out what’s what. The Admiral leaves you in charge of the star base and then he promptly gets obliterated by an ambush of Chruul (nasty alien types), which also serves as a tutorial to the game’s combat mechanic.

Anyway, with the fleet gone and Halcyon 6 being cut off from the rest of the Terran Federation, it’s up to you to fend off pirates, collect resources from liberated allies, hunt down the invading Chruul and handle diplomatic relations with the other, more amiable alien races. The game walks you through each of these mechanics in turn, guiding you to recruit your first officer, build your first ship etc. Then it’s up to you!

One small step for man

Initially of course, you only have one officer, so gameplay is rather linear. You choose from 3 possible candidates, each one being either a Tactical, Science or Engineering officer, and they have different unlockable abilities on the ground in hand-to-hand combat, or in space behind the controls of a ship. The key thing in this game is to find which combination of skills work well together… but I digress.

Once you have an officer you need a ship. The selection of which is done for you based on the officer type you have selected, but later on you can build whatever you like (depending on what you have unlocked and researched, of course).

Now you have a ship, it’s time to go kick the snot out of the pirates that are attacking your base. Combat is a Final Fantasy-esque turn-based affair, in which you choose which ship (when you have more than one) uses what attack. Each attack is different and can have the ability to inflict a vulnerability on the receiving ship, or exploit an already existing vulnerability. It is this mechanic that allows you to set up some pretty awesome combos that can literally devastate your opponent. There are also defensive options that can be selected that either heal, shield or otherwise buff your fleet.

There are points in the game wherein you either beam to the surface of a planet, or stumble across some hidden nasties in your space station as you explore its depths. In this instance you enter ground combat mode, which is essentially exactly the same as space combat, but with people and phasers instead of ships and massive guns. To be honest, I’m a little disappointed that the developers didn’t mix up ground combat to work a little differently. Having it the same as space combat just feels a little cheap and I didn’t enjoy it as much.

In space, no one can hear you scream

Halcyon 6 is resplendent in pixel art graphics with snazzy and impressive special effects during fights. One great little feature is that your ships look more and more beat up depending on how much damage they have taken. As do your opponents.

Accompanying the rich graphics are meaty sound effects, with explosions being my personal favourite (unless it’s me exploding!). The background music is also very well done, with different states blending from one to another – so when you’re looking at the starmap the music is all calm and chilled, but as you zoom into the starbase view it adds drums and other instruments into the mix…it’s a lovely effect and works really well.

Overall the game is very polished. The scenes with communicating diplomats are quite tongue-in-cheek and playful. I enjoy playing games that have a sense of humour, and Halcyon 6 isn’t afraid to poke fun at itself and the obvious borrowing from Star Trek that it does. I like that.

It’s also very engaging. If you’re not careful it is very easy to get totally engrossed in fact! I completely forgot to take notes for well over an hour, which is testament to the game’s involving nature rather than that of my appalling professionalism!

There are many reasons to come back to this game again and again – achievements, officer abilities, research trees, lots of places to explore, many missions to complete – I can see that if you were to do nothing else then it could seem a little repetitive, but in my opinion this potential pitfall is offset by the emerging story and the variety of ships and their abilities.

Yes, you do have a lot of fights that repeat themselves in structure, but they are never exactly the same and you constantly have to adjust your tactics in order to mould the battle in the direction you want it to go.

I really enjoyed playing Halcyon 6, and look forward to returning to the game once my workload is a little lighter. It is technically possible to just pick it up and play it for just half an hour, but that’s not something I seem to be able to do! Great game.