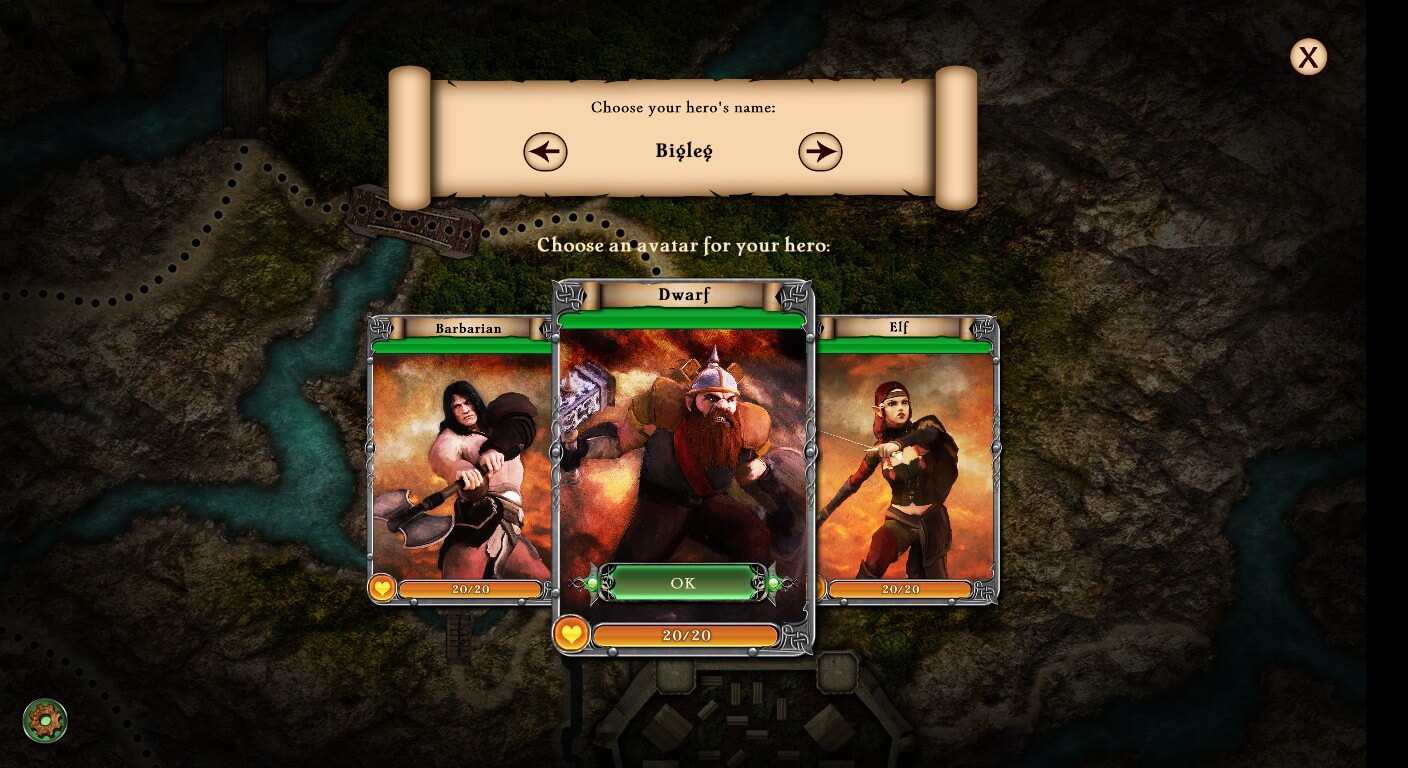 Fighting Fantasy books, as a rule, were often quite difficult. Not ‘oh boy, I need some skill to approach this problem’ difficult, but more ‘screaming at dice rolls, wondering where all your gold has gone and cursing wrong turnings’ difficult. And so the goal of any computerised adaption, deprived in this case of much of the original text to offset the effect, is to be good enough that that frustration is minimised. Has Nomad Games delivered?

Fighting Fantasy Legends is more than just one book adapted for the virtual world; it’s three gamebooks woven together in the land their stories inhabit. Instead of just one main quest, you get three, where each helps toward the completion of the other. This serves to counteract the plot’s shorter nature, since much of the original text has been left out. These main quests are the plots of the books City of Thieves, The Warlock of Firetop Mountain (which has received its own adaptation recently) and Citadel of Chaos.

We got off to a good start when it crashed in the first two minutes, but that seemed to be the game’s one-time method of saying ‘hi’. In any case, before you begin you must choose a character. The cosmetic choices for this are sadly lacking — while three classes (barbarian, dwarf or elf) give a fine number to choose from, you can’t play a female character and you can only select from a premade list of names. It doesn’t matter much and probably comes down to not wanting to create and animate three more 3D avatars, but it would have been a nice touch to have a little more choice there.

Much the same as in the books, your character has three important stats which you can adjust when creating them. Skill and luck both affect your chances of success in checks of the relevant type, with skill being used for damage rolls in combat. You can increase or decrease these up to a point, but be wary of your stamina, as it decreases with every point added. Bigleg the dwarf may end up being a god among men (er… dwarves) in terms of luck and skill, but one good roll and he’s out for the count. Not even the selection of useful feats on offer will help him there.

With all that out of the way, we sent Bigleg the dwarf off on his adventures with a decent set of stats and a trait which would help him level faster. In no time at all he ended up with his first big quest, split into a series of smaller side quests he would have to complete before he even attempted the main task. A lot of these side quests involved finding certain items scattered about the world, for which Bigleg had a handy bag to store them in. This inventory can be ordered alphabetically and such, but generally item cards appear in the order they are picked up. The only slight issue with it is that you can’t zoom in on item card graphics, which means you have to squint in one task involving a map.

You don’t get much direction on where to find the items, so a good deal of time is spent wandering around, fighting and exploring. Bad rolls, failed fights and poor decision making can all get you killed, but unless you’re playing on permadeath mode, that isn’t game over. Instead you take an injury and a curse, affecting your skill and luck dice respectively. You don’t lose gold when you die, but each injury and curse can be healed at certain towns on the map for ten gold pieces, so it’s wise to avoid death early in the game when gold is scarce. You can choose not to heal them, but they’ll stack up quickly to make fights and checks impossible if left unchecked.

Dying is a consequence of fighting, in most cases, which is carried out through a series of dice rolls. You, the player, always get to roll first, which is always good for insta-killing rats. This is where your stats come in — if you have twelve skill points, you have twelve dice to roll. Each has a fist on one side and if they land on that side when you roll, they deal one damage each to your opponent. They can likewise do the same to you and most tend to have fewer than ten dice in use.

You can bolster your attack by owning different weapons. There are several to find throughout Fighting Fantasy Legends with one–three fists on a single die, giving you a higher chance of scoring an extra damage point with each roll. Shields work with a similar die, but rolling the shield symbol on those negates one point of damage from your enemy that turn. It may not seem like much, but every point counts in this adventure.

Luck works in a similar way but in different situations, such as working out whether you pick up the right cup in a poisonous drinking game (if you’re stupid enough to play it) or where some dwarves knock you out and run off with some of your gold. Curses appear as crosses on the die and automatically fail any luck check. In contrast, injuries don’t affect the outcome of combat rolls. There are two other ways in which luck and skill checks work, but both are easy enough to understand and quite fair — it’s important to understand that statistically, rolling a blank even on twelve dice is quite probable. What may seem frustrating is quite normal and happens for the enemy as well.

After every successful encounter you gain experience, and at each new level you can choose to upgrade one of your skill dice. Each upgrade will add a symbol to an empty die face, up to three faces, until there are no more dice left to upgrade. If you have an injury or curse, the upgrade will essentially cancel out that effect and there will be no change to the pre-injury value. You can’t delay level-ups, so you can’t avoid this wasted level by getting the injury or curse removed beforehand. Once you reach a certain point, however, you become incredibly hard to beat, though not invincible.

You’ll travel all across the map on your adventures, using a series of interlinked roads which, unfortunately, you’re likely to forget the layout of. There’s no way to zoom out or pan on the world map, so you can’t look ahead to plan your route. You get shown road destinations when you reach a crossroad, but it’s easy to reach a dead end by accident.

In a similar manner, when walking around most of Port Blacksand (the only town whose streets you can walk through) and other quest locations, you can’t pan to view the roads ahead even after you’ve been there before and you can’t revisit a road you’ve already travelled down. This is a relic of how it worked in the books, but is incredibly frustrating if you take a wrong turn or just don’t want to go through the same streets twenty or more times to get what you need, so could have done with better adaptation to make sense in its new format.

Going back through towns and dungeons does give you the ability to make different choices each time. Some of these, like deciding to attack the silversmith (or slaughter three children for no reason other than being confused — stay classy, Bigleg), are permanent options which can make things difficult later, but many can be chosen again and again for benefit or foil. The real benefit of this is gold, which can accumulate quickly once you learn where to go for it. Each location has a deck of cards to encounter at certain locations and while many in the town are event or combat cards, there are some items such as dropped gold thrown into the mix. Gold is particularly abundant in the sewers, where you can very quickly build a stockpile as you cut your way through rats and zombies.

Whenever you dispatch a new enemy, you get a new card added to your bestiary. It serves as a good reminder of your enemies getting more difficult as you level up but it’s also a good place to look at all the well-illustrated card images. Titles serve as greater motivation for completionists, with titles available for your character all the way from ‘The Cheese Thrower’ to ‘The Dragon Slayer’.

Once you complete the game the first time, you unlock Hero difficulty, followed by Legendary difficulty on the second victory. So there is some motivation for replaying it, but it all comes down to how repetitive that town-traipsing grind is the first time round. Still, for many it may be an improvement on the books, with the primary addition of location-specific decks and the advantage of not having to maintain your own character sheet.

For those who would like to see three Fighting Fantasy tales woven together in the same story and those who enjoy the journey from squishy adventurers to tanking heroes, Fighting Fantasy Legends is by all means an enjoyable game. However, those who grow easily bored of some repetition may be less thrilled with the prospects Legends offers.

Dropping Into Work is a dystopian workplace deathtrap