Hello, I am a regular human and I am here to play basketball. I am certainly not a large robot staffed by between one and eight little people which is made to play post-apocalyptic basketball.

Currently available for free from the itch.io page of developer Powerhoof,  and coming out on Steam in early 2018, Regular Human Basketball is a local/online multiplayer game for 2–16 players where you control massive robots by running around inside them. If that sounds chaotic, that’s because it is, and it’s mental fun. Each robot is controlled by large buttons on the inside: four on the underside for the all-terrain wheels, three for turning and activating the magnet in the middle and three on top for controlling the thrusters attached to the outside of your robot.

These buttons are activated simply by pressing them when you’re next to them, but the sheer number of buttons on each robot, and the fact that these buttons will remain pressed even when you leave, means that it’s very easy to forget you have in fact left the magnet turning. And so you’ve got to rush back to turn it around, send the robot back in the other direction, stop the magnet before it goes too far the other way and counteract whatever the enemy robot is doing, all within a few seconds and also whilst possibly coordinating with several other people, all of whom are trying to do their own plan at the same time.

Just when I thought that the craziness of four people running around a large robot was too much, Powerhoof one-upped themselves by telling me that players could invade the enemy robot and interfere with it by pressing random buttons. It is very easy to chuck out invaders, only requiring a player to run over the intruder, but this mechanic just adds another level of craziness and fun to Regular Human Basketball.

As this is regular human basketball, playing in the Human Basketball Association, the commentators are — of course — real humans and certainly not robots with clunky voice synthesizers. While the quotes for the commentators are quite funny, it does get repetitive very quickly and I tended to tune it out whilst playing.

One of the coolest features of Regular Human Basketball comes at the end of the match. While playing, the robots move very slowly to make understanding what is going on easier. Once a round finishes, however, you get a replay of the game at an increased speed to reflect real-life basketball. This makes for very entertaining footage, as the robots move back and forth as all the little people inside try and work out what they’re doing and find where the ball is and oh-god-we-activated-the-rockets-why-are-we-over-here-oh-god. 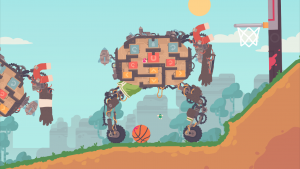 From my time playing it at PAX, Regular Human Basketball is an amazing piece of fun. I was only able to play with four players per team, but the excitement, frustration and enjoyment was palpable. The simplicity of the game meant that old NES controllers were used, which not only served to highlight how simple the controls are, but also made it that just much more fun and unique — a pile of old NES controllers among the Xbox 360 controllers and VR headsets.

Fork Knights has you playing as fencing foods!