The Final Station, from Do My Best Games -and published as part of the ever increasingly interesting catalogue of TinyBuild- fits snugly into the modern Survival Horror genre, as a matter of fact, it holds true to a lot of the tropes of earlier entries, while still managing to maintain the enemy count of more recent titles.

It tells the story of Edward Jones, a railway driver on the Belus-07 route when everything goes wrong. As the player you have no idea of what is actually going on from the get go – and going into the demo build blind massively altered my 42minute run through the first act of the game from what I might have experienced should I have heard all about the game before I started – as such I’ll try and keep the story details light in this quick talk on my experiences. But, the gradual unveiling of the story -be that through environmental clues, of which there are many, end-of-act sequences, or through the chatter of survivors on your train- is done in a calm, nonchalant manner, and I was really impressed with it.

This pitter-pattering of story and setting throughout the game, through notes, screens, rubble, and the whispers of store keepers, and writer/librarians as they argue in the carriage while you try to manage to keep the train power under control — all of these passive, optional moments telling a story is exactly one of the running patterns through some of Survival-Horror’s greatest titles. Heck, I was expecting to be able to save at a typewriter. Each of the stations, notes, and survivors are carefully placed in a way that each of the stations seems to build to a crescendo – an introduction of a new enemy, a swarm of the shadow creatures in a underground station, a descent into a sewer filled with enemies – and then patter down to the escape, as you dial in the activation code to allow you on your way to the next station.

These survivors that I have mentioned can be found around the levels in the game, normally on the exit loop of each of the stations, although one I found was hidden away through a safety cover I nearly didn’t check – also, when I restarted the game for some screenshot-grabbing I actually ended up with at least two different characters than I had in my first playthrough. These characters all react differently, some regaling you – or whoever is listening – with the story of how they came to be there. Meanwhile others, as I said earlier, will argue among themselves about what little they know about the situation, and the mega-state they live within. As it turns out, there’s a lot more to the world than the game initially lets on – this isn’t some random zombie outbreak, romp through the countryside – your train is armoured, you have a job, and the map’s strange station names aren’t reference to some obscure foreign land we bearly know. Of course, with only the first act, and with it 2 of the other drivers, and maybe 5 of the stations, under my belt I can’t even begin to speculate on how the game escalates. 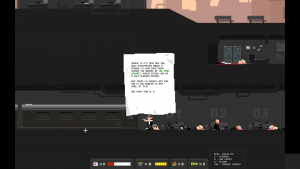 Ammo, food, and medical kits -the middle serving to feed survivors on the train, the latter serving a dual purpose of healing you or wounded survivors- are sparsely littered around the various stations of the game, certainly never in abundance. In fact, the peak amount of ammo I managed to hold was 42, and that rapidly dropped to about 12 following clearing a rather messy situation up. I only managed this large amount of ammo due to the fact that I was taking advantage of the game’s melee attack, and the improvised weapons which can be thrown at enemies for an instant kill. The melee attacks are small jabs, a little over the reach of the standard enemies, although even then they require three hits. Throughout the first act the game also adds in dashing, armoured and exploding enemy types, which reinforces the power of range, and headshots. The danger, of course, in conserving ammo with a focus on melee is that the enemies are strong , so you risk using up your limited supply of medikits – and if you do that then you won’t be able to heal up bitten, or bleeding survivors who you manage to load into your train carriage.

What’s the point of the survivors? You might well be asking. Well, aside from the background story they impart as you complete somewhat-annoying power management tasks around the train between missions, you are actually awarded  items and money for getting them back to the safe areas of the game. This money lets you stock up on food, medi-kits and ammo before heading out on your next journey.

Each of the levels have been excellently laid out, normally forming an exploratory loop as you head to the furthest point from the station in an effort to find the access code to move on, then folding back on yourselves due to some distraction or alternate route that criss-crosses with your earlier path. The game is prone to pushing you down secret passages – and that quickly develops into a player curiosity as to what’s behind each door when presented with split paths, sometimes it’s a room with a few rounds of ammo in, sometimes a long corridor filled with a handful of enemies. I really enjoyed the fact the game encouraged me into a careful exploration of each level, and I never grew bored of the level design in those moments with it – I hope that carries over to the full game.

That said, we know little of the full game’s structure. I’m hoping it takes a more freeform structure after the first act, with you chosing from multiple destinations as you run from safe-zone to safe-zone clearing objects and saving people in between. However, the fact that the acts are numbered means it could simply be a 100% scripted fare – still not a bad thing, but it would be a shame to have the shop/survivor mechanic stripped down to X amount of journeys, especially as that moment gives you a chance to break free of the level’s limited ammo quantities.

When I first saw the game I thought it was going to be a procedural haul across a train network, “The Amtrak Trail” or something like that. But, in fact this is more like a sci-fi Deadlight stripped of it’s parkour. Infact, mobility is probably my only real complaint in the game. Obstacles which block your passage at the end of two of the included levels were simply bins.. I could climb over that in real life, I’m unsure why Edward can’t bend his knees – it could simply have been a solid wall, it would have kept the realism there. That – however, is my only complaint.

The Final Station launches this Summer, you can enjoy the announcement trailer for the game below.