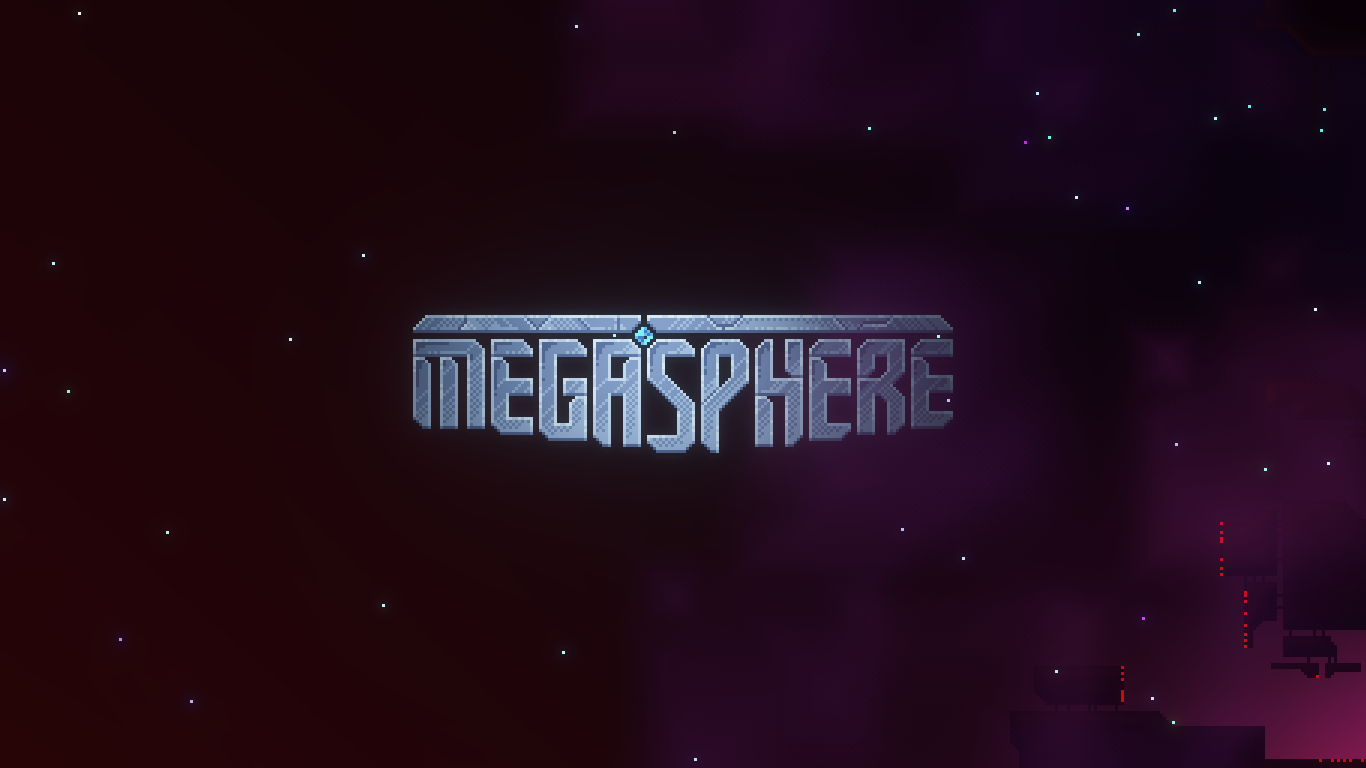 Megasphere is a procedurally generated 2D arcade style platform shooter, with a stylish retro feel and a real sense of danger and threat. It places you in the space boots of a lone adventurer, partnered only by his ship, in a quest to explore endless vaults and corridors, which are naturally stuffed with monsters, on a journey to discover why the stars are going out.

The game starts with a brief exchange between the main character and the ships computer, before you are dropped into the closest thing to a tutorial this game has. It quickly becomes clear that this is no ordinary sci-fi blaster game. The futuristically retro music coupled with the eye-catching Terraria like graphics work together to create an atmosphere of oxymoronic abandonment which instantly signals to the player that he (or she)  is completely alone, and must rely on their own instincts to survive.

Megasphere’s transistorised punk setting and graphical theme is immediately apparent from the title screen, which is stylishly ambiguous, but contains enough information to present the science fiction setting. In game the level of detail of the world you explore is stunning; from the chains hanging on the ceiling to the glowing monsters which you encounter, everything seems to be visibly interacting with you in some way. This manipulates the aforementioned loneliness, making the environment seem even more artificial, reinforcing the hostile nature of the maze which you discover. The dark, gloomy colour scheme of the initial areas helps to create a sense of dread, while the bright lights which are scattered throughout the facility show the setting to be practical and cold, devoid of any light but the harsh glare of neon.

By far the best thing about the games setting is its destructibility. Throughout your adventure you will come across wires and chains hanging from the ceiling, which not only act as decorations, but also allow you to shoot them creating sparks and potentially blocking off routes for enemies. Almost anything you see can be shot and destroyed in some way, including lights, walls and crates, the latter of which releases a harmful acid substance which damages both friend and foe alike. This provides a lot of opportunity for good sound effects, and makes the overall gameplay just seem that much deeper.

On the subject of gameplay, Megasphere has a lot of features relatively unseen before in the 2D shooter genre. As previously mentioned destructibility is key to playing this game, so much so that some areas are only accessible through mining ceilings and walls with your trusty laser blaster. This level of sandbox destructibility is my favourite part of the game in its current state, as it really does allow you to choose where you will go next, as well as supporting the all-important feeling of exploration which this game encourages.

The games UI and menu systems are stylishly designed, with your characters inventory taking the form of a pip-boy-like device, where you can equip and exchange found upgrades for your suit and weapons. While you do so, small, deliberate graphical glitches will occasionally plague your screen, adding a sense of authenticity, and adding a nice touch to a menu system which otherwise could have been unremarkable.

Throughout the game you can find various weapons, which you can mod and upgrade by using tokens and modifications dropped by enemies. This system is hardly unique; however its dungeon crawling ancestry backs up the games retro image, with an easy to understand system. While the system is simple, one thing I would say is that each upgrade is hard to figure out; you are simply given a name and small icon, meaning it is difficult to commit to ‘level  1 reflection’ without a description of its effects. On the other hand, though, this does heighten the sense of mystery and really make it feel like you are ‘modding’ your weapon, with unknown results.

The games procedurally generated nature does mean every playthrough is its own story, which, again, is a rarely seen aspect of games. While this feature does add a real sense of exploration, it does take away from any feeling of storyline or character progression, as well as leaving some randomly generated areas feeling a little rugged, meaning the gameplay isn’t as smooth as it could be.

Despite this, the majority of gameplay seems to work as intended, despite the games alpha stage label. I find that Megasphere reminds me a little of the PlayStation 1 game Terracon, likely because of the spider-like appearance of the ‘monsters’. This, along with their movement and impending lethal nature of your foes, increases tension in-game, and draws you in to keep your faceless hero alive against all odds.

Overall Megasphere definitely has great potential, and if the developers continue to work as hard as they have so far, then I believe the game could be a real contender on the steam market.

Want to try the game yourself? It is currently in early access and can be bought for £10.99 by visiting the Steam widget just below

What are your thoughts on the game, or procedurally generated games as a whole? Comment below!