Committing a crime with your friends is only half the battle, once the crime is done, who is going to go down for it? In Scape Goat, you get to have a bit of an influence on who you all blame, if you are able to communicate with your friends to decide who everyone should pin the crime on. It’s a very interesting and quick game, with lots of subtle moves and interactions which can really get people on your side, unless you are who they are blaming.

Scape Goat is a three to six player game, for ages fourteen and up, where everyone is given a character card and three cards in their hand. These cards all represent different characters – either as full cards of a specific color, cards that are split in half showcasing two characters or a wild card that showcases all characters. In the middle of the table, there are five action cards, tokens to represent each play under them, and a single card flipped up under each one. 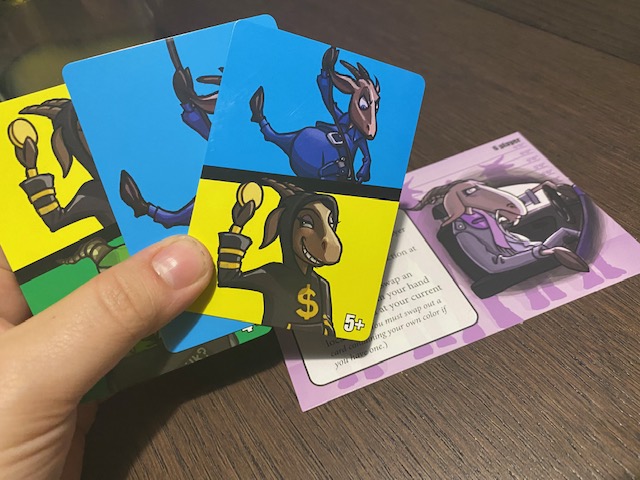 At the start of the game, two dice are rolled. On the back of your card, you can follow the two numbers in the columns to see who is being accused. Now, everyone else should see the same person as you, apart from the person who it is, who should see someone else. If that person is you, then everyone else will see you and you will see someone else, if that makes sense. Now, through your turns, you need to subtly nod at, wink to people, and otherwise try to see who everyone is voting for.

On your turn, you can move your token to an action card you are not already on, then perform the action. These actions are pretty simple: spy allows you to look at a players hand, where you can switch around cards or point to what is in their hand to let them know what character you are thinking of pinning the crime on. Trade allows you to give away a card in your hand and get a card from another player, so you can give them someone you are totally not pinning the crime on. Stash allows you to select a face down card and replace it with a card in your hand. 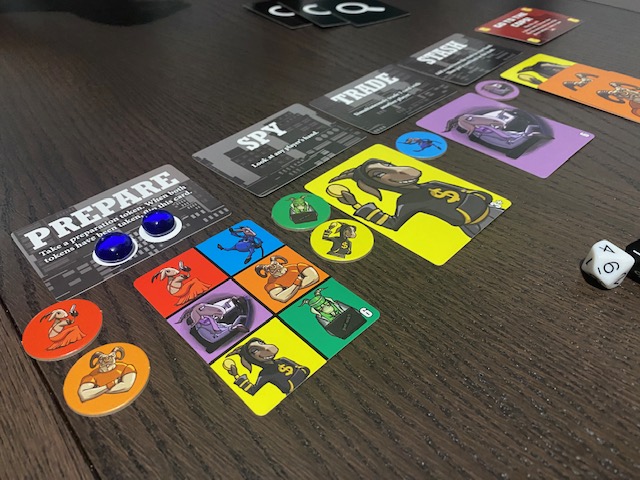 Prepare and Go to the Cops are two “end game” actions. You can go to prepare to get a token. Once the two tokens are taken, the next time someone with a token goes to prepare, everyone needs to flip over the card of someone you are all pinning the crime on. If you land on prepare and you have no token, you can steal it from someone else. Go to the Cops is the action you should take if you think everyone else is going to accuse you, as it allows you to accuse everyone else.

If someone is feeling a bit nervous about being picked, this game can end super fast. It becomes a challenge of trying to figure out who is being accused and trying to make sure it’s totally not you. Scape Goat is a pretty fun game – and is one that isn’t too time consuming to set up or explain, which works very well as a warm-up game. It’s great to play with a group of friends who all know each other well, through subtle movements, you can really change the game. 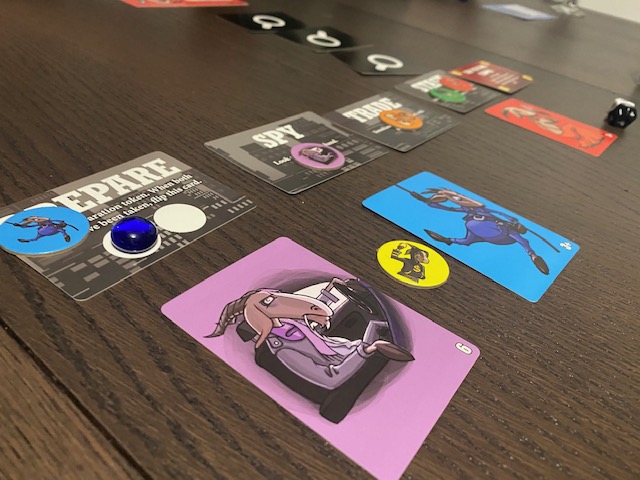 You can find Scape Goat on Thirsty Meeples.