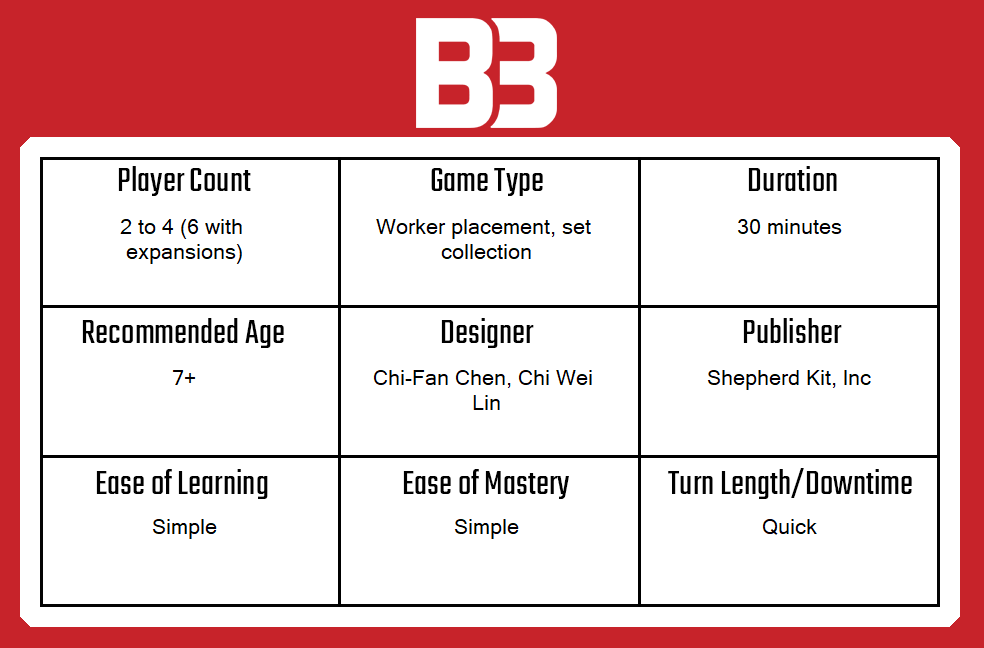 Paleolithic is a gorgeous entry-level, worker placement game from Taiwanese publisher Shepherd Kit. The game features incredible build quality and beautiful artwork, which is designed specifically to entice younger gamers into the world of board gaming. Despite its younger target audience, Paleolithic offers the kind of straightforward charm that make it capable of wooing even the most stoic board gaming cynic, though it is unlikely to find a home with well established and experienced gaming groups.

If you’re familiar with Stone Age from Z-Man Games, then you’ll certainly be familiar with the template that Paleolithic is cut from. For everyone else, Paleolithic is a basic worker placement game set (unsurprisingly) during the titular period in which mankind still lived in nomadic groups, hunting, gathering and building temporary settlements.

Paleolithic features incredible artwork that is immediately recognisable and very, very pleasing to the eye. It is especially appealing to younger players, who will love that most of the depicted characters are either anamorphic or are themselves youngsters. Everyone (regardless of age) will notice that the build quality in Paleolithic is very high, which makes it a very tactile game with a superb board presence.

Each player in Paleolithic takes control of a tribe, which constitutes a player mat, an animal companion and three meeples. Each tribe also receives a set of wooden huts that reside in a three-dimensional display until they are purchased and placed on the board. Each turn, players will use their meeples and any already established tribes, as well as a basic dice roll, to collect goods which are then traded for more tribes or artifact cards.

The objective in Paleolithic is to collect and amass points, which is achieved via crafting artifacts and building tribes. The game end is triggered as soon as any player has amassed a combination of eight artifacts and tribe cards, combined. Certain combinations of artifacts score bonus points as indicated on the player card of each tribe and ultimately the winner is the player with the most total points across all sources. 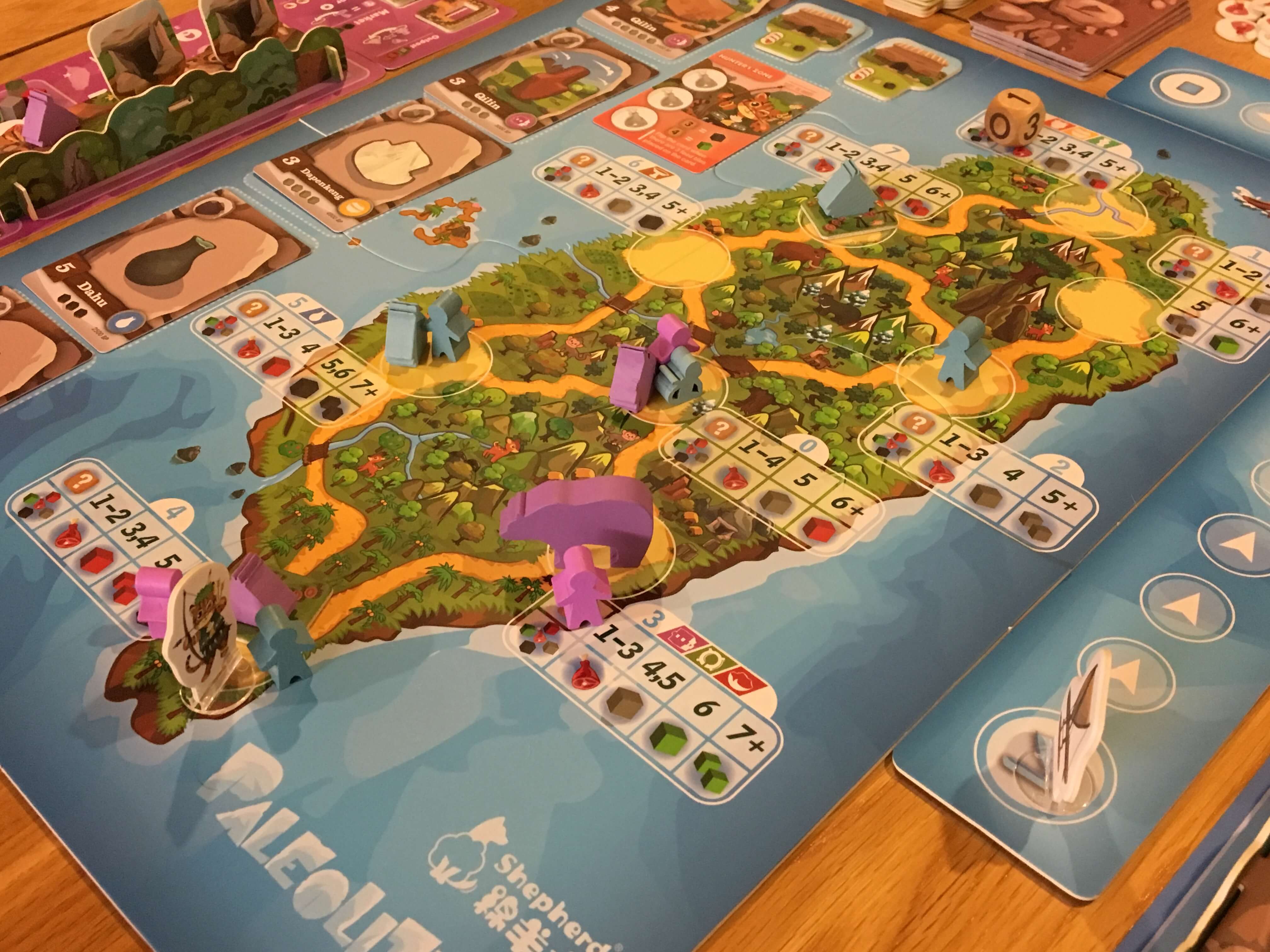 As I’ve mentioned, the component quality in Paleolithic is absolutely top notch. The set that I’ve been reviewing includes both the “Dawn of Humanity” and “Seafarers” expansion packs. Between them, these expansions take the player count up to six, introduce a new trading board (with its own deck of cards) and add a few other minor tweaks to the game. As a result, the pictures you’ll see include the full suite of potential options that the game currently features.

The board itself is very attractive and extremely well laid out. There are clear spaces to place workers on and the paths that join them can’t be missed, meanwhile most of the cards and other components also sit in their own slots on the board, making the game highly intuitive. Paleolithic is also built to a very high standard, with a superb silky finish on both the board itself and across all of the cards. In the same way that the board is very simple to understand, so too are the cards — which feature very clearly defined artwork, big, bold numbers and so on.

The wooden pieces in Paleolithic are varied and of excellent quality, and I particularly love the tribe huts which sit in their own stand, only to be swapped out by thick cut card pieces upon purchase. This is absolutely style over substance, of course, but it’s a very neat feature that I noticed younger players, again, absolutely loved. Each tribe includes an animal companion which is represented by a wooden token that matches in terms of size and shape, with the mammoth and the bear being huge, of course.

The manual is very clearly laid out and straightforward to follow, which is partly because the game is so simple anyway, but it also has a nice flow to it. The basic rules set players up for an introductory game, but it’s likely that most experienced players will keep reading and immediately introduce the longer game rules (which is what I will describe below) as well as some of the expansion content, which is not materially more complex.

Finally, there are cubes for resource, meat tokens for food and a couple of fantastic wooden dice – broadly speaking, Paleolithic is a beautifully produced game that you’ll never struggle to get to the table based on how it looks. I have a feeling that kids looking to get into the hobby will love it and you’ll have the opposite problem of them not wanting to put it away! 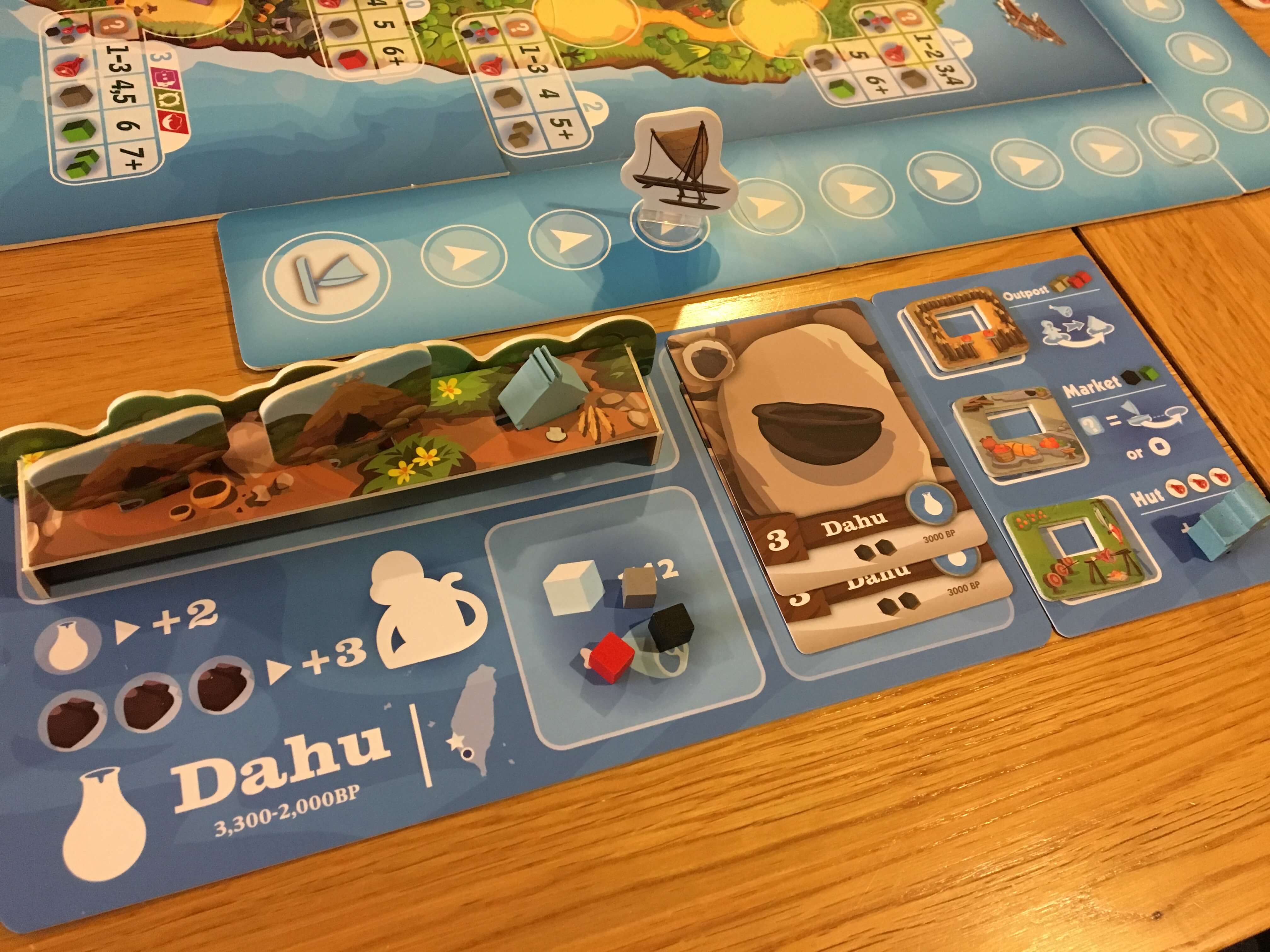 As an entry level worker placement game, Paleolithic really is fast and very simple. It’s the kind of game that is so straightforward, I’ll almost certainly manage to make it sound more complex than it is as a result of this explanation. The first thing you’ll do on any turn is to explore the island. This basically means moving one of your pieces to an adjacent space (or keeping them where they are) and then rolling a dice to explore the space in question.

Each space has several numbered outcomes printed on it and the total of the number of meeples (including animal companions) and the roll of the dice dictates what benefit exploring gives you. So, for example, if you want food, which needs a roll of one to three on your space, so you’ll only place one meeple there and hope that you don’t roll a three (because that would be a total of four.) In this example, four would yield something else like jade or stone, so there’s no such thing as a wasted turn.

After exploring, you’ll have the option to trade your resources in for either an artifact card or a tribe token, which will be swapped with the wooden hut in your three dimensional player display. The wooden hut is placed on the board and will act as an additional plus one to dice rolls, which of course makes exploring easier if you want high numbers, or simply allows you to roll for that space on any turn.

There are a few other actions available on some turns, but not others. For example, there are four elders in the game (only two of which will feature in each game, since each elder is represented by one side of a double sided card.) These elders allow the player to make special trades and take alternative actions when on the same space as a meeple, with certain conditions then causing them to flip and be moved elsewhere on the board. The Seafarers expansion also introduces a new track, as well as a set of unique items that take precedence over the basis set once the traders arrive. 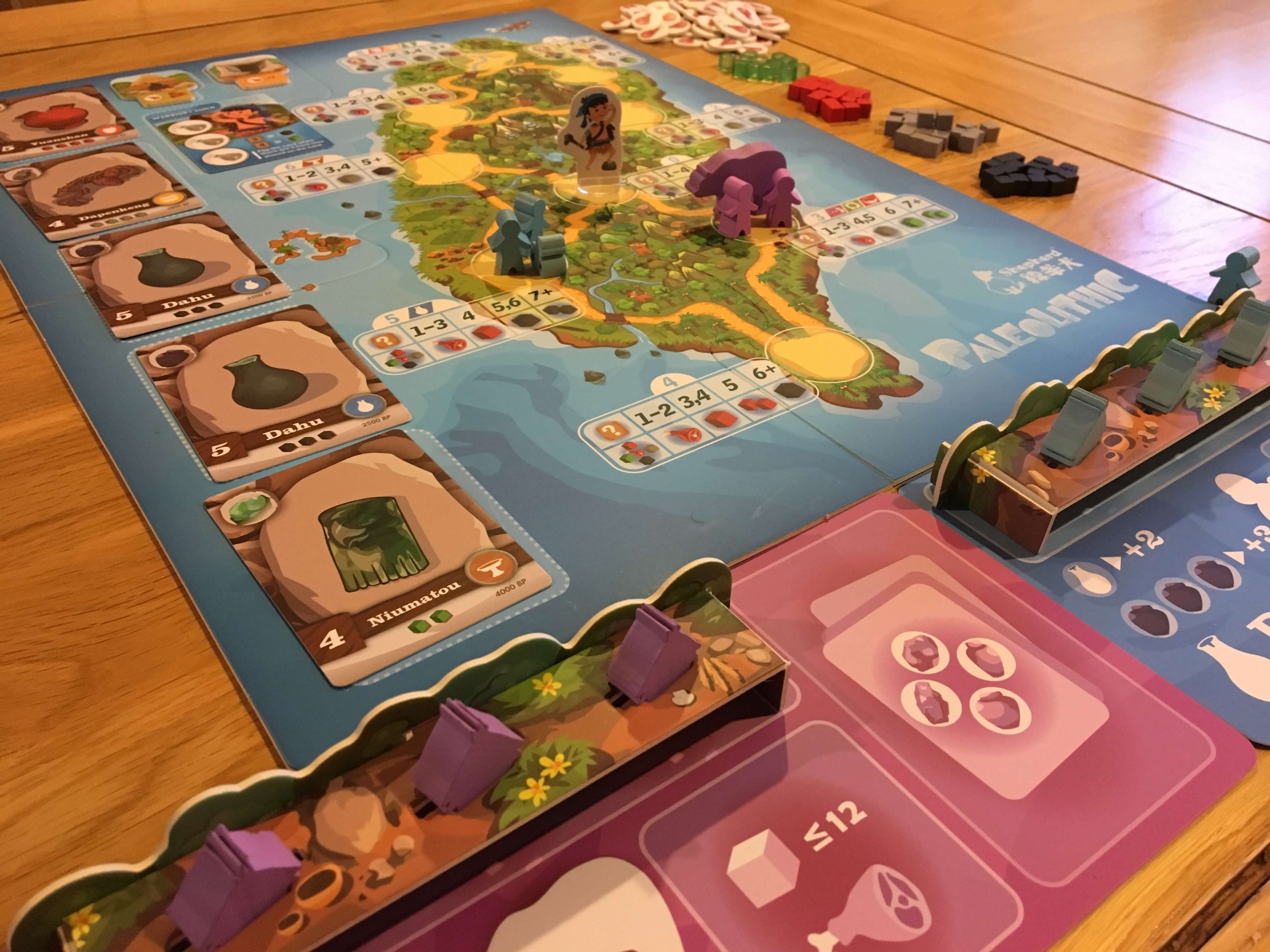 I spent my first two or three games of Paleolithic in awe at the beauty of the components and the simplicity of the gameplay. Considering that those games were spent with another thirty-something adult, I should mention that there was an unusual amount of childlike joy at the table. When I actually introduced children to the mix, the excitement and fun of playing Paleolithic became almost contagious!

In all honesty, Paleolithic is a basic, entry level game — exactly as it says on the tin and just as Stone Age (as I mentioned right at the beginning) is. Where Stone Age is perhaps a bit more competitive, it is also quite random and occasionally very punishing – despite retaining a fairly low barrier of entry, thanks to its simple rules. I think that the designers of Paleolithic were hoping to create a similar game, but with a clear focus on younger players and helping them to learn about modern games, without punishing them unfairly due to luck.

Paleolithic still asks players to stretch themselves in order to obtain everything they need to score maximum points, but where there is always a risk that you might not roll exactly what you want, there’s never a risk of achieving nothing at all. I saw kids playing this game and sighing about getting “yet another” food token instead of a jade cube, but I never saw them pull back three workers and achieve absolutely nothing, which can happen in Stone Age.

As a result, I also found that in Paleolithic, everyone tends to reach at least six or seven of their objectives by the time someone has reached eight, so the game remains tight throughout. When playing board games with children, I’ve found that keeping the race close and avoiding outright injustices are perhaps two of the key elements (alongside making sure the game is fun) to make sure everyone stays engaged and happy. Paleolithic does this, whilst also including proper game mechanics like worker placement, compounded bonuses for set collection and more, all of which prepare young gamers for heavier games. 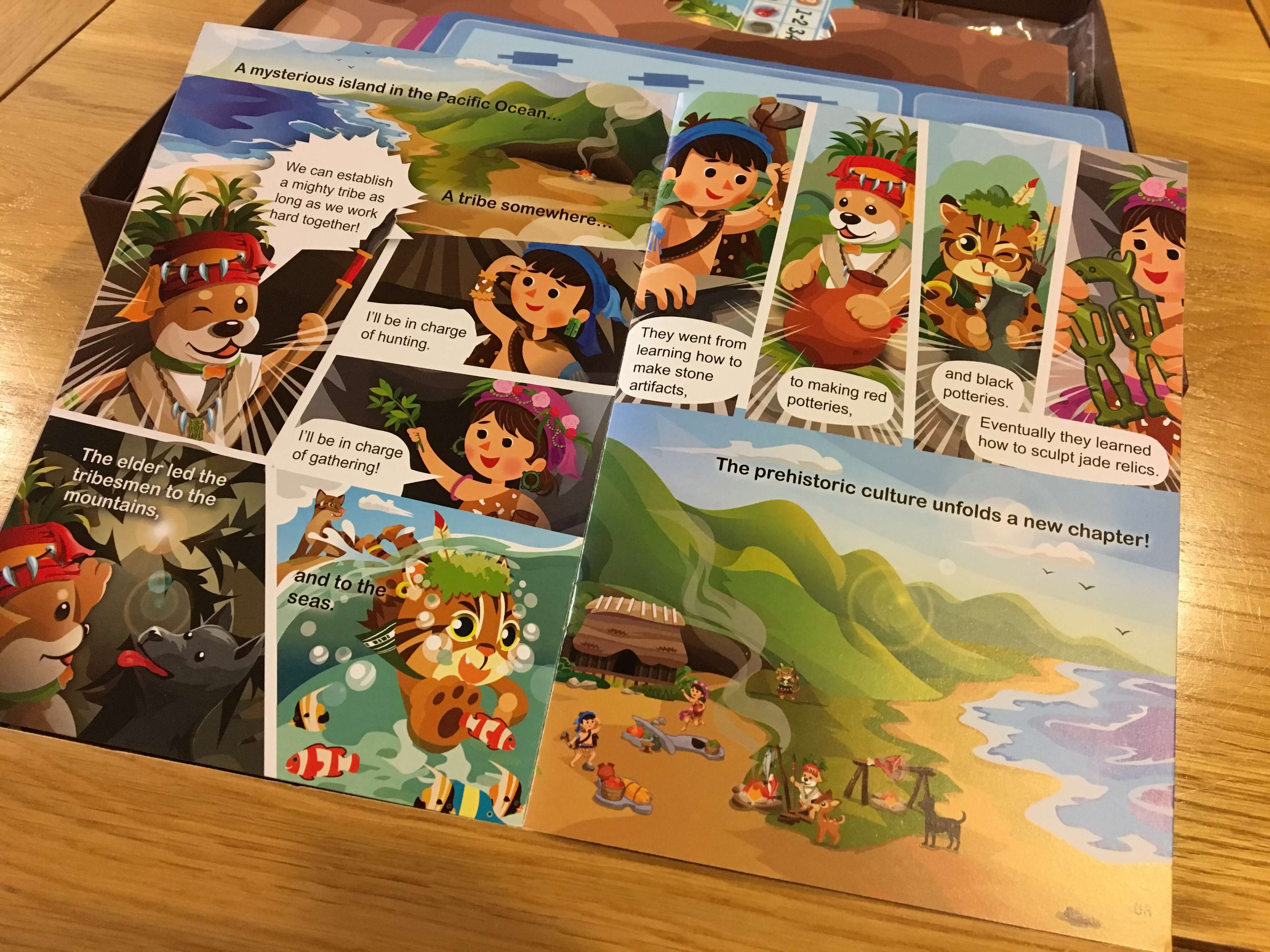 I’m not convinced that Paleolithic is a game that every adult gamer will enjoy, but I am reasonably sure families with school age children will get great mileage from it. The game looks absolutely stunning, so from kids to grandparents, there’s a combined ability to ooh and ahh about what is being set up on the table. Meanwhile, kids will clearly be asking questions about the subject matter and whilst it’s not my main concern in more adult focused games, I do love the idea of teaching my family through sharing interesting play experiences with them.

The game itself is very mechanically sound as well, with a solid and fair worker placement mechanic that is simple to teach to players of even five or six years old. The outcome of everything that happens in Paleolithic is fair and the game often feels rewarding (for children especially) since it delivers minor successes relatively frequently and after chaining just a few steps.

If you’re looking for a game that will help to migrate young players away from basic, classic games and onwards to modern board games, then you could do far worse than to pick up Paleolithic. It’s cute, well produced, educational and fun. If you’re already an experienced gamer and you either don’t have children or don’t intend to play with them, then I suspect (unless you find it especially cute, which it is) that you’ll find deeper, more rewarding experiences elsewhere.

A copy of Paleolithic was provided for review purposes. You can find out more about the game on the Twitter site of publisher Shepherd Kit Inc. You can also see the Essen Spiel 2018 Games List created by Shepherd Kit by clicking here.