N++ : Returning to the Way of the Ninja

Tight jumps, minimalistic levels, and gold pickups are all hallmarks of Metanet’s N series, although you could easily argue that clever level names, masses of levels, and landmines are equally essential to the recipe.

There’s few video game franchises that can claim a protagonist with fifteen years of service under their belt, but the Ninja of N, N+, and N++ has been around since 2001, albeit jumping around in a browser window in their earliest outing (the game ran via Flash). N+ was when many joined the series (myself included) when it launched across multiple platforms in 2008; the game’s simple appearance, clean colours, and easy controls were perfect for handheld, and it was also a tight fit for the -then fledgling- Xbox Arcade service.

Those who have already played either of the previous titles already know most of what they are in for now that the new, final, title has rolled around. However, for those unfamiliar with the game, and it’s unique twist on conventional platformer jumping, it’s as fine a point as any to join the series [although you can check out the original in it’s current form here]; this is as much an expansion on the earlier games as it is a sequel with the newer features largely being aesthetic, or mode based. After all, the momentum & movement systems in the game remain nigh perfect as it was in the earliest titles. It’s a strange set of jump physics that see you turning at the last moment before a jump for a boost, or even just holding the jump button to continue rising (as though you have a jetpack), or even when you touch-jump-touch-jump as to build up massive speeds to accommodate the longer gaps you’ll be taking on at times. 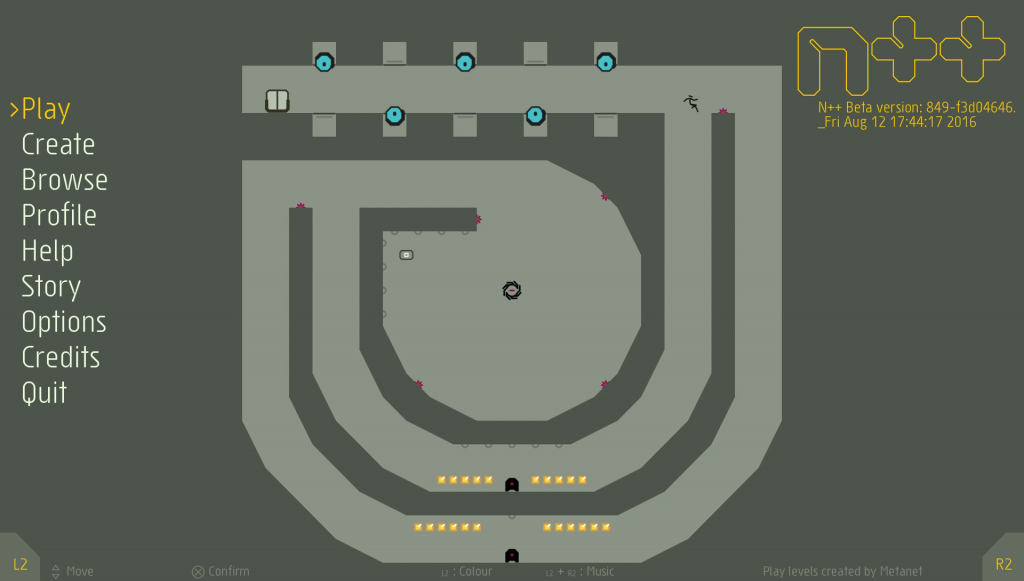 All that said, the addition that really stuck out to me was the user created content section. I wasn’t lucky enough to experience N++ when it launched exclusively on the PS4 last year, and my experiences with the beta build of the game didn’t let me dabble with the community maps (although the level editor was available). The game comes with just over 2300 levels built into it, divided up into 5 level blocks as with the previous outings and split over Races, Co-op and Solo -although solo can be played multiplayer- however the PS4 community alone had contributed over ten times that to the game during it’s year of exclusivity thanks to the level editor.

Having now spent some time with the results of the editor, I’m not so sure that applauding the 20’000 is too wise as there’s no testing required before the levels are pushed live, meaning that some simply impossible levels are published and available. Thankfully, it’s not as dire as wafting through pages of dregs, the game does have several ways of sorting the levels, ranking and the like, which does hide away a lot of the chaff but, as with most curation, also hampers discovery.

N++ ships with over 50 colour-schemes, which can be changed from the pause or main menu, as well as a solid, 63-song long mix of electronic music. The colour schemes are definitely worth checking out, changing some icons, and all colours of every level through simple palette swaps; but there’s no real mundane set of colours, instead a wonderful mix of high contrast sets. It’s colour-schemes done right, and is definitely something that other minimalist games should be considering implementing.

There’s not much else to say on the game, really. The various enemies are fantastic, the included levels all feel personal and hand crafted, urging you down the perfect route. The ticking timer at the top, and the glinting gold through the levels, both play on your sense of urgency, so much so that sometimes you just have to take a moment out to ready yourself again. The momentum and movement system is perfect as ever, with you gradually building the skill to boost through levels, flipping and pulling off awesome saves from death. If Mario is the grandfather of the platformer, then N is the father of the speedrunners.

If you’ve played a previous entry then you’ll likely already be buying it; if you’ve not then follow that earlier link and give the browser based one a go, you’ll know within a dozen levels if it’s for you, if you can tear yourself away.