Lead a fractured squad into enemy territory in Broken Lines

Trapped behind enemy lines, Broken Lines follows the relationships of a squad of eight soldiers as they attempt to reach freedom against all odds.

A simultaneous, turn-based, tactical game, Broken Lines from Portaplay focusses not just on combat but on the interplay of the relationships and habits of your squad. The rookies and privates who survived the landing are a varied bunch — trained but not experienced — and it falls to you to use them to their best ability while minimising turmoil within the squad.

Some of your soldiers are lone wolves, despising being cramped up alongside their squadmates. When they give suggestions for how to approach your flight through enemy territory, they’ll advise stealth and range. Others may be adrenaline junkies with little respect for their own safety and a wanton lust for ambushes and assaults. Each also has moral convictions: one might try to lead you down a path of scorched earth, using civilians as cover or burning infrastructure to cover escape, while another’s trust in strangers might lead you down a tougher route. Regardless of their differences, you need to use them to the best of their abilities to ensure the squad completes their mission — whatever they decide that to be.

It’s a tall order, to get a mismatched group of squaddies through a series of multiple-choice story events while keeping everybody not only alive, but loyal. And that’s the core of Broken Lines.

We were lucky enough to see a vertical slice of Broken Lines while at the Nordic Game Conference earlier in the year. The level being shown off portrayed the approach to a small village nestled amid some craggy mountains. The developer, who was playing through the game, made a careful approach through tall fields before splitting his troops around a rocky break in the path. His units came under fire from half a dozen enemies hidden between the buildings and he nearly lost a unit in the initial surge. Careful movement from cover to cover — and the employ of a ballsy grenade throw — saw his squad push up into the houses before finally clearing out the last of the enemy.

Broken Lines’ creative director, Hans Von Knut, talked to me about how the game handles. Turns are simultaneous, with both sides assigning and submitting movements and actions to give a general structure to the next few seconds. This grants access to both ‘snap decisions’ as well as full tactical oversight of your squad — especially important as their numbers increase. This is essential, as the enemies are unrelenting and once one of your troop is dead, you’ve lost them for the campaign, unless you can redo the situation and get them through. 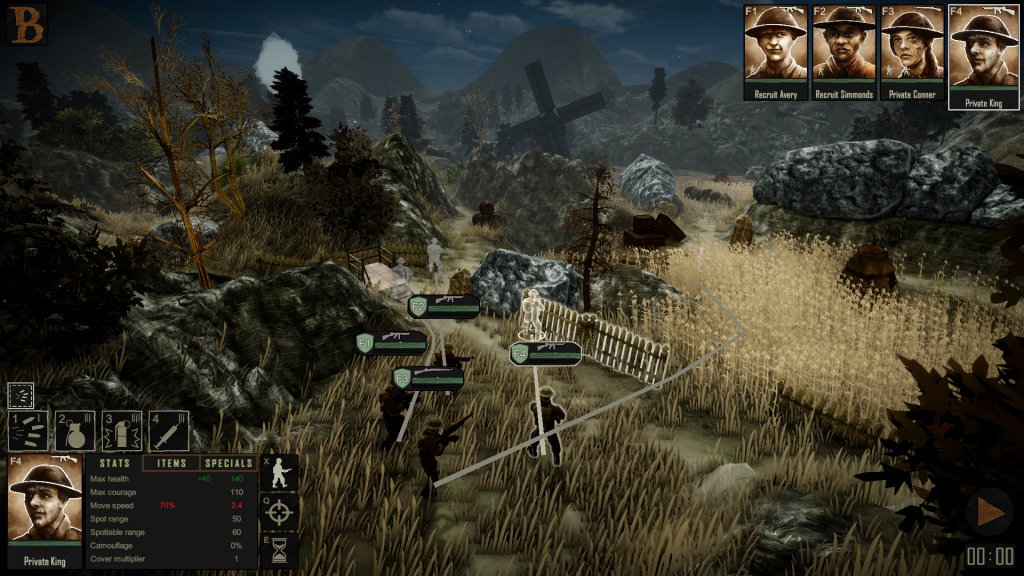 I’ll leave you with the official game missive:

Broken Lines is a game about a group of men with different personalities, ideals, ethical standards and battle plans. Individuals with very different opinions about whether they should carry out their duty – or simply try and survive.

Broken Lines is in development for PC, Mac, Xbox One and PS4. It is expected to release in 2019. If you want to follow its development, the best way to do so is via their IndieDB page or their Twitter @brokenlinesgame.