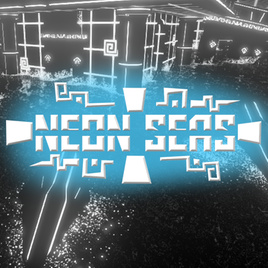 It’s a classic Arena Shooter, apart from you are a little being on a hoverboard floating around a flooded, neon arcade.

While I admit the ability to accurately spot and shoot enemies will likely suffer due to the contrast of the room’s neon with the darkness that otherwise encapsulates it, I can’t help but admit that I’m really interested in giving the game a go.

Neon is used where it is for several reasons, but one of the main ones is that it naturally pulls the human eye; like loose change, or static on an old analogue TV – so the idea of playing in a dark arena, reflections bouncing, lights glowing, it seems really alien yet also very pure at the same time.