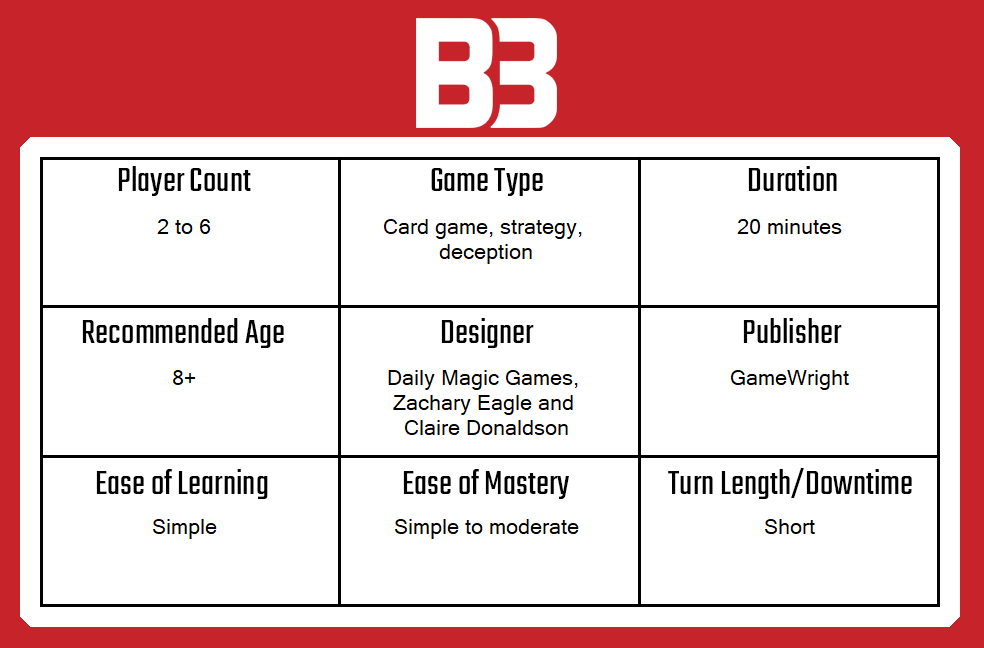 Go Nuts for Donuts! is an adorable two-to-six player card game where players try to get the most wonderful donuts from the donut box. All of the players surround the donut box, trying to pick a donut or accompaniment that no one else is aiming for. The goal is to have the most tasty and point-filled donuts at the end of the game. Players must deceive and think carefully in order to get what they are really after. 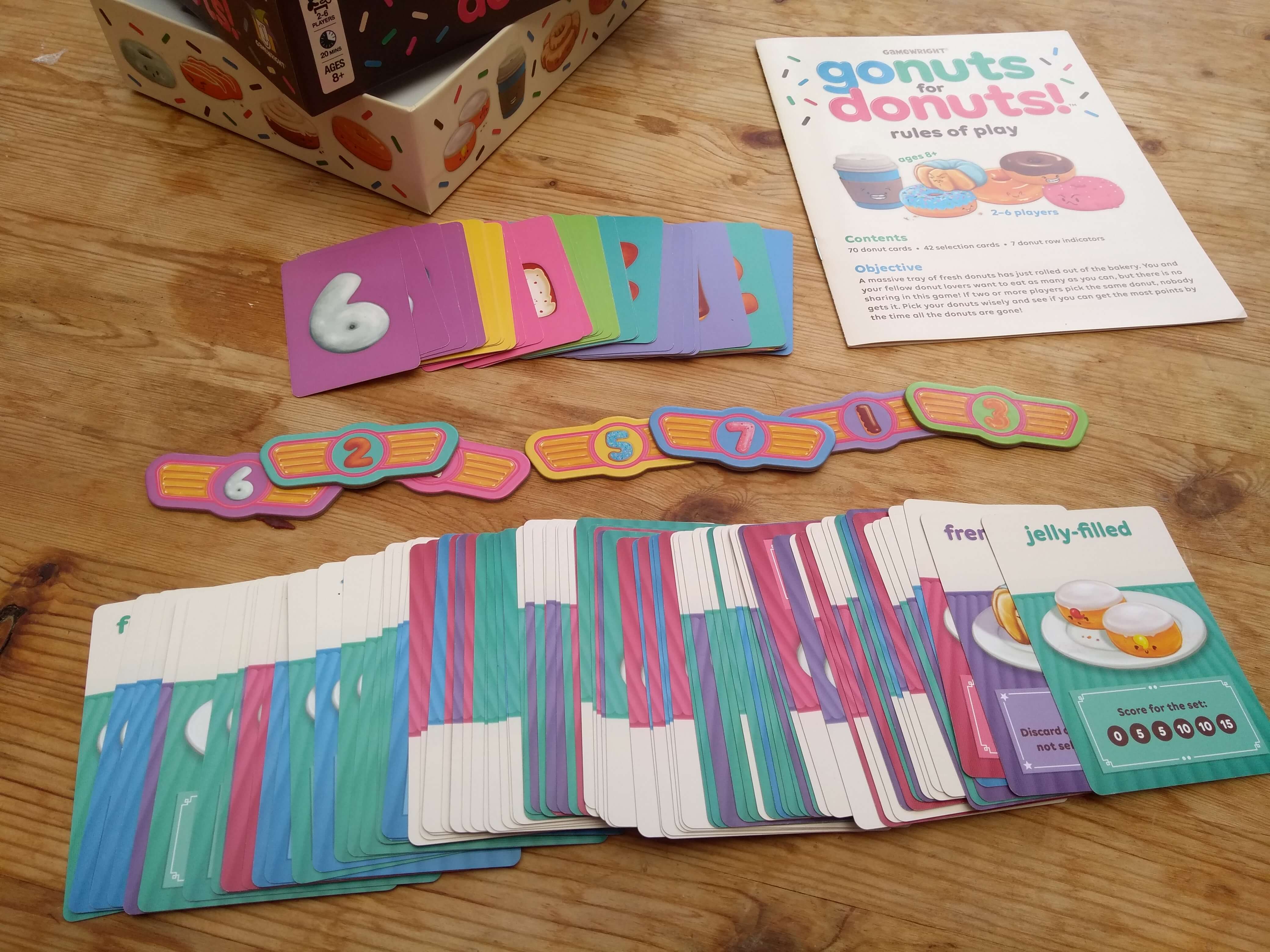 As previously mentioned, the goal of Go Nuts for Donuts! is to collect the donuts worth the most points and keep them until the end of the game. Depending on the number of players you have, you will have that number of cards plus one extra along the middle of the table. These donuts are labeled with cardboard markers, showing which donut is in which slot. These are the donuts you are all fighting over — to get the most delicious donuts (or the ones that benefit you the most).

You go through all the donuts until there are not enough left in the draw deck to fill the middle of the table. There are a variety of cards — some that give you points, others that can be combined to give more points and action cards that let you affect the discard pile or other players. Action cards have a small star on them and must be used as soon as they are picked up.

The components of Go Nuts for Donuts! are fairly simple. You have a deck of cute donut cards — some of which are accompaniments like milk and coffee. Another, smaller deck of cards contains donuts in the shape of numbers. These numbers represent the row you want to take the donut from.

Cards each have a description and point value, as well as a small number of circles that indicate the number of players needed for the card’s use. This is to help with people who might be color blind — the game as a whole is colorblind friendly and was made with accessibility in mind.

Some point values are just flat values, while others are dependent on different conditions. This can be having the least amount of donuts at the end of the game, gaining an additional number of points for cards that give negative points or only being worth a specific number of points when collected with more donuts of the same kind. Others just give you negative points but a good action to balance it out.

The box also has cardboard-cutout numbers, which show which row each donut is in. I have the Kickstarter version of the game, which comes with ten different types of bonus donuts. These cards were given out to people who backed the game on Kickstarter and include a zombie donut, spicy donuts and bacon. 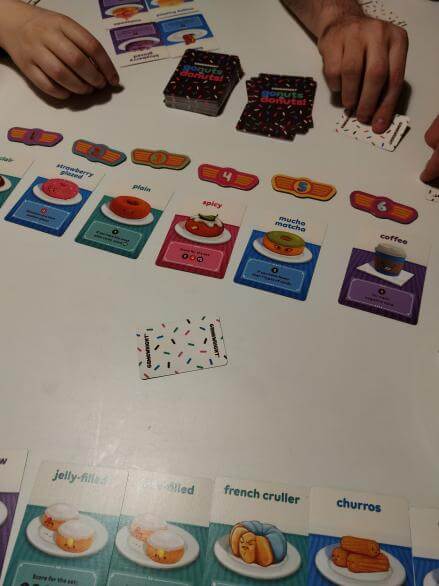 This game is pretty simple to play. Once the donut board is full, you and the other players must choose which donut you’d like. You can then put your donut number card face down in front of you. Once everyone has picked their number, together, you all reveal them. If two or more players pick the same donut, that donut is discarded and neither of them get anything. If someone picks a donut that hasn’t been picked by another player, they get that donut.

Starting from the donut in slot one, players with action cards can use their actions. Some of these actions require stealing cards from other players, taking cards from the discard or clearing all of the donuts on the counter. Once all of the actions have been done, donuts will be laid back out on the table in the missing slots and it happens all over again. This continues until you are out of the number of donuts needed to fill the table.

You can always see other player’s cards, so keeping track of who has what cards and seeing ahead to what they need will help you plan your strategy to have the most successful combination of donuts you can possibly have.

The gameplay is very simple and easy to understand, especially after a few rounds of play. Once you get into the game, it is clear how these cute donuts work and you can easily start planning your sugar-coated victory. The number of donuts out in the middle makes sense, no matter how many players you have. Towards the end of the game, as the box gets stale, people do tend to fight over the same donuts, causing them all to be discarded.

Each card is very easy to read and understand and the actions are very specific — telling you exactly what you want. All aspects of the box and cards are well designed and super adorable. The creators kept in mind accessibility and being able to play easily with a younger audience, which works well. 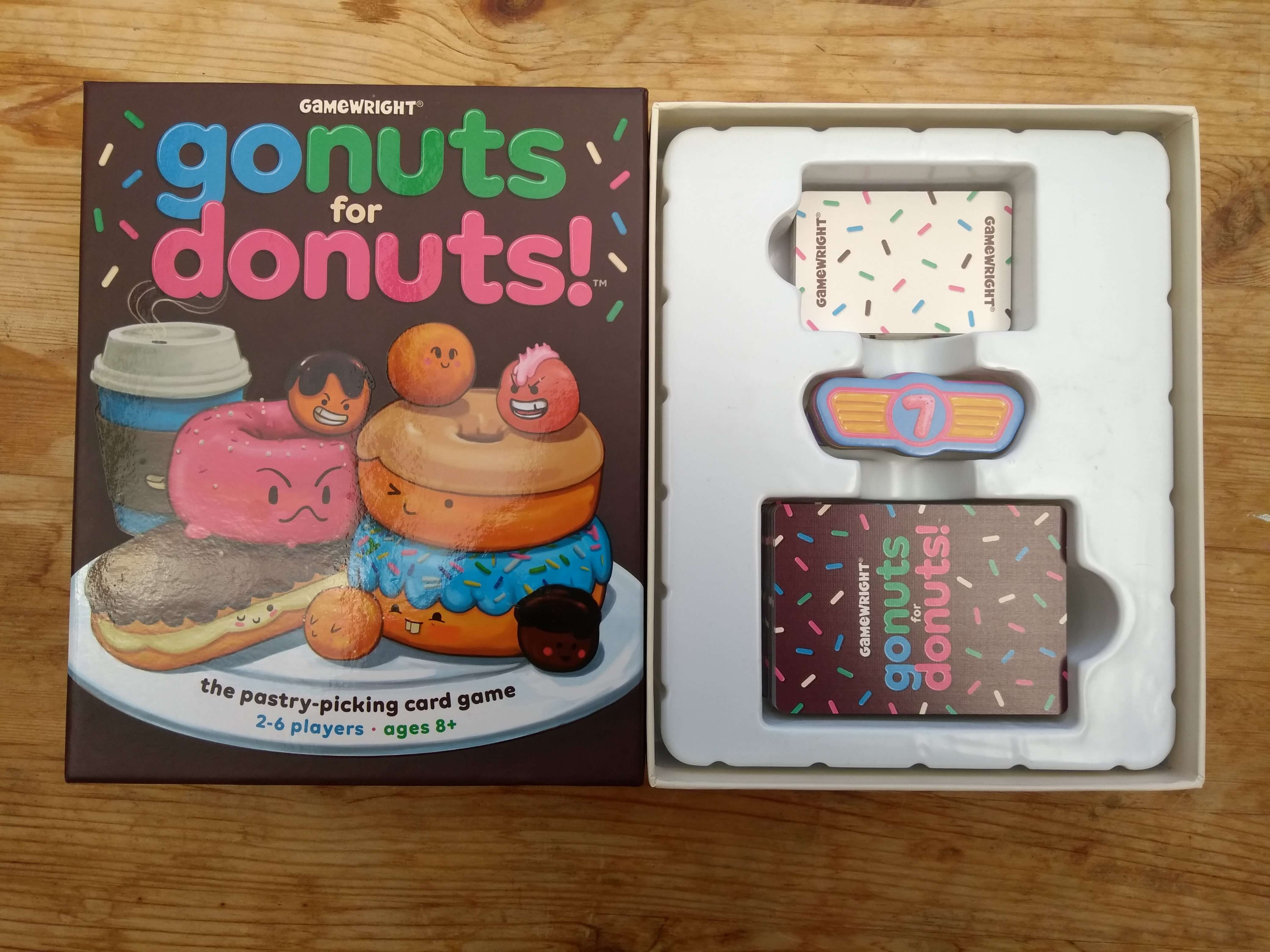 I really love Go Nuts for Donuts! — I had backed it on Kickstarter for its lovely art and cute graphics. The gameplay is so easy to understand and follow, it doesn’t take long to set up and it is easy to convince your friends to play along with you when it comes to cute treats. It is a very happy, go-lucky card game fit for most ages. You can strategize and try to force other people to lose their donuts, or you can just collect the cute food you wish you could eat.

You can pick up your own copy of Go Nuts for Donuts! on the publisher Gamewright’s website. Do check out the creator’s website for future games and more information on this one!