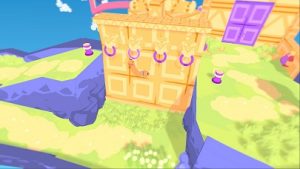 PHOGS is, as it turns out, surprisingly simple to explain. Basically, two players each control one end of a double-ended dog, you then proceed to gobble things up or connect to other things in order to solve puzzles, ultimately getting an acorn so you can feed yourself to a double-ended snake as to get to the next part of the level. Simple.

It’s also a game which is undeniably lovely. It perfectly captures that cheerful, colourful spirit of gaming which is normally left exclusively to the chipper halls of Nintendo, or Rare — although Sumo Digital’s Snake Pass, and a few others have pulled it off. It also captures the odd spirit of those would be contemporaries as a double-ended dog sits well alongside a dinosaur which eats anything, a bear-bird combination, and a pink-blob which absorbs things to consume their powers.

I’m getting ahead of myself though. For, you see, PHOGS was — for the moment at least — simply showcasing for a competition which concluded at EGX ’17, the Dare Academy. The gist of the competition is simple, but the opportunity and prizes are remarkable, I recommend you follow through the link if curious, as I’ve been warned to keep prattling to a minimum. (For reference though, PHOGS took home the award) 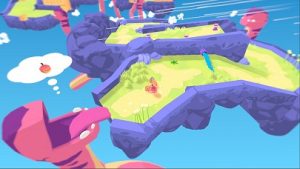 PHOGS‘ character design lunacy ties into the game mechanics particularly well, double-ended characters have existed in media for some time (Cat-Dog), and a question that seems to regularly occur surrounding them is ‘if both ends eat then… which end… ya know?” PHOGS answers that with great confidence, proclaiming that both do, yes both. What this means for the players is that one end of the creature can consume an object and it will, in relative time, pass its way through the creature. Need to get a block onto a tile? Eat it. Need to water a plant? Plug one head onto a water pipe and move the other near the plant. Need to, simply, get something out of the way? Eat it.

There are of course other ways of using the creature to interact with the world. For a start, the creature can extend to ridiculous lengths, which can be used to block the small enemy critters from ruining things you working on. In addition to this it can bite onto objects, which results in a co-operative, momentum-based obstacle where you must alternate between gripping onto hooks as to cover distances.

The build of the game which was on show at the event was, unfortunately, quite short, but it still gave off a very impressive vertical-slice of an extremely promising game. From what I’ve seen of PHOGS, with its ability to capture fun in an innovative way, I think you’ll be reading a lot more about this game, and its developer Bit Loom, here on the site.

*All media has been callously ripped from the developer’s website.