Sprinkle Palooza is a lovely little platformer which follows the story of Zap, an inflated-balloon dog, as they journey through dangerous and deadly levels aided by strange, personified-cupcake friends they spring from imprisonment along the way. 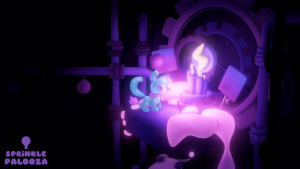 It’s a massive amalgamation of soft pinks, purples, greens and blues, or at least it would be if the world hadn’t been removed of power. This is where Zap, a balloon animal dog, comes in.

As far as platforming animals go, Zap is pretty limited; they can jump, bounce and move from side to side. There is, however, a puzzle element to Sprinkle Palooza which is based around the one unique ability the character possesses: Electric Discharge. Zap can, well, zap things into activity with a button press — presumably the zapping is done with a static discharge, what with them being a balloon.

This zapping has multiple uses, but the most obvious one comes in the fact that it discreetly guides the player, with most inputs resulting in strings of coloured lights springing to life, leading off in the direction of your next objective. At the moment this isn’t too useful, as the level design was quite simple and the camera is very zoomed in — at least for the parts played — however, as the game levels grow more complicated (as teased in a developer tweet, below) this could be useful,

Where to next? @EGX thats where!!! From tomorrow we will have a playable demo for you all to try! Come see us in the REZZED area! #indiegame pic.twitter.com/iRGX3p44Ub

The prototype of Sprinkle Palooza, which was on show at EGX ’17 on the NFTS stand, definitely did a good job of introducing the basic mechanics of the game. In addition to the guiding lights which you reveal throughout the game there was an early point which had you zap a socket near a cage to release the mutated cupcake within. It’s these creatures which you are out to rescue while on your journey — something especially driven home by the fact that the cupcake’s freedom was required for you to continue on your path, its freedom resulted in it depositing a small, bouncy blob which Zap could then use to bounce over a blocked route. 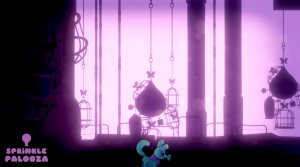 In this way the game shares a lot of similarities with the classic, puzzle-platforming Oddworld series; in both you must use a limited skill set of jumping and manipulating the environment as to free allies who help you along the way. While the game may currently lack the complex seeming maps of its likely influence, it certainly felt like it was starting to channel the vibe of the games systems.

Being an early build, there were a few issues, at one point I managed to make the character’s facings reverse, which didn’t really affect gameplay and will be an easy fix for the team; another time I messed up a jump which both caused some issues, and surprised me as the game’s hit detection — and jumping height and strength — otherwise felt perfect. Still, these are very early days for a promising little title.

Unfortunately my time with the build of Sprinkle Palooza was short, however if the production continues along the current route then I don’t think it’ll be long before we’re looking at a game which has mastered both the mechanics of the genre, and the inherent quirkiness that attaches itself to the best games within it.

Updated 25/09/2017: We’ve updated the images in the article with more recent images, for a better representation of the game. We were also forwarded a press release which included a synopsis of the game, those curious can find that below.

“The game is set in the back of a bakery come pet shop which specializes in mutant party
pets, such as pet cakes. The boutique advertises their manufactured pets as the “perfect
gift”, enforcing an overwhelming focus on happiness to the point where it starts to feel
artificial.

Balloon pets are another shop speciality. You play as Zap the young balloon pup, who
decides to sneak out of his display case and explore the shop at night. In the back of the
shop, the sugarcoated truth begins to unveil itself. You come across a faulty pet cake that’s
been returned, and scheduled to be exterminated. Your mission is to help it escape before
the shop re-opens in the morning.”