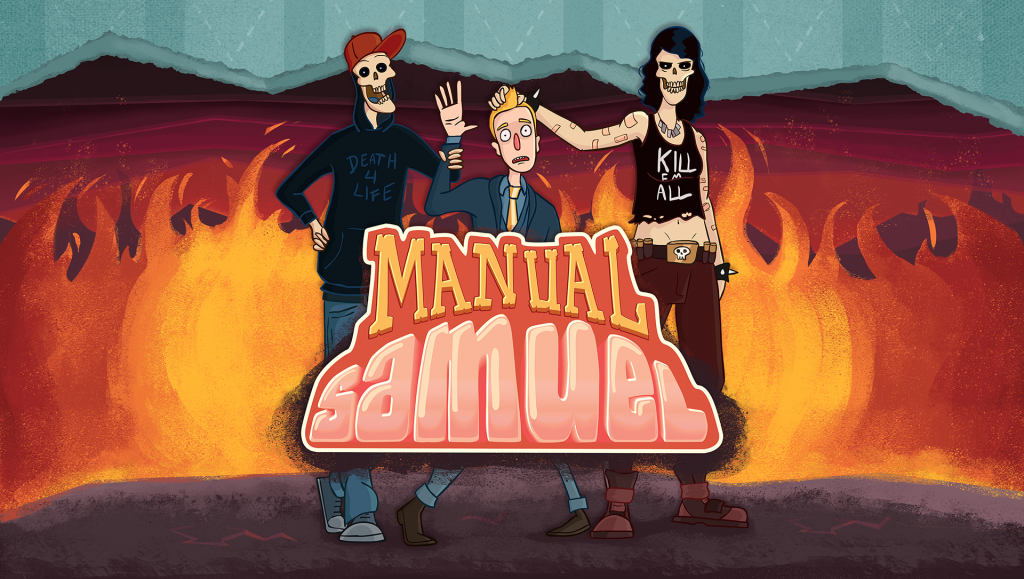 The first time I laid eyes on Manual Samuel was back at the PC Gamer Weekender. A game where you manually control limbs, breathing and blinking, is, I would say instantly memorable.

It’s not just the controls of the game that make the game stand out; the art and animation style of the game, a bright, cell-shaded style reminiscent of 90’s adventure games, and the dry -frequently labelled British- humour completes the trinity of visuals, audio and controls that make it truly stand out.

I recently got some time to play through the first few chapters of the game at a preview event, as well as the chance to talk briefly with the developers about the game. 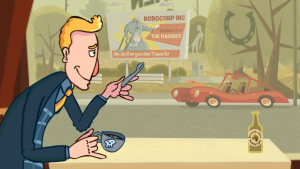 The titular Samuel is as far from a sympathetic character as you can get; with the opening chapter of the game -a short tutorial- introducing the lazy, rich, and obnoxious character as someone that most people would wish bad things upon. Unfortunately for Samuel this is exactly what happens to him, as he is rendered broken and deceased several times over shortly after his girlfriend dumps him mid-conversation. From there you are immediately introduced to the second main character, Death himself.

Death as a character has certainly been done before, however this Death isn’t a gritty, grappling murderer like his Darksiders counterpart. Nor is he the glum, sometimes introspective and sympathetic Death of the Discworld games and (of course) book series. No, the Death of Manual Samuel is an out-of-luck, out-of-cash punk with an immature attitude and teenage mannerisms. It’s his blasé attitude to the dangers and difficulties that face you as Samuel that delivers a lot of the laughs, as he knowingly endangers you for entertainment at Samuel’s hope to return to normal life.

Death’s not just about kickflips and pranks though (although that’s a large part of it), in an early level he sets you up on the drive to work, with a detour through a deadly part of town, only to spot War; an equally immature rendition, complete with teenage mannerisms, and rapidly change his tune, pretending instead that he’s just out for a drive, and stepping up to try and impress her.

The driving level was new to me, the previous demo I had seen ending just before. Rather than simply alternating trigger buttons on the controller to walk forward, and bumper buttons to use my hands, I had to actively swap hands from the wheel to the gear-stick, and also shift gears successfully. All of this while dodging innocents on the road ahead. It felt like something from Incredible Crisis, a truly amazing mini-game driven narrative game that launched back on the PS1.

Unfortunately the driving section did seem to go on for a little long, although this could have been been the fact that I wasn’t driving at optimum speeds, but was more likely tied to the fact that Death’s one-sided conversation restarted any half-complete line interrupted by dodging pedestrians. The lines, that said, were well acted and natural, it just seemed to be a little longer than required in it’s earliest part.

The subject of voicing brings us to what is easily my highlight of the entire game as far I’ve seen; the narrator. A dry, calm, clear English -accented voice rattles off witticisms, sarcastic and off-handed remarks about whatever is going on in the game, fearlessly pointing out that by skipping the intro you have ignored the people who created the game, or underlining your failure to traverse a flight of stairs, or that time you inhaled with food in your mouth. It’s all exceptionally well written, and it’s a strong testament to the developers’ skills that it works so well.

Of course, a heavily narrated story laced together with videos immediately sounds as though it’s lacking in the replayability department. This is not the case as Ozan Drøsdal, project lead on the game, explained to me. The game features collectable hashtags which are unlocked from doing things in specific ways; holding out on stare-out, correctly getting fully dressed, not pouring boiling coffee all over your face. In addition to this there are interactive points throughout the game which bleed through later into the narrative; the aforementioned coffee if successfully drank will keep you alert, and thus require you to blink less; putting your shoes on will spare you from ridicule later when you arrive at work, smashing your arcade cabinet mercilessly will lead to it’s reappearance later in the game. As well as all of this, the game is laid out in chapters, with free selection once you’ve completed them; so that you can replay favourite parts, or better show them off to friends.

There’s not long left to wait now for the release of Manual Samuel, with a rough release date of mid-October currently pencilled in for it’s release on PC, PS4 & Xbox One.