One of the biggest movements in the games industry has been the adaptation of classic board, pen & paper, and tabletop games to digital versions; Nomad Games’ adaptation of Talisman, Cat Rabbit’s adaptation of Heroes of Normandie, Tin Man Games’ adaptation of The Warlock of Firetop Mountain. Those and many others have achieved solid followings in the digital marketplace, and although these are recent examples, it’s something that’s been going on for years.

It sometimes seems a little bit strange that we still play physical board and card games when we live in an age with photo-realistic digital imagery, and nearly instantaneous trans-continental communication via the internet. In many ways it’s that ability to touch the figurines, to leaf through the manuals, and to pass cards from hand to hand -as well as the proximity of those you’re playing with- which manages to maintain that magic from pre-internet days.

There are games which do the physical side of things extremely well; compare the simple rules and satisfying movements of mancala to the nigh endless pieces of Betrayal at House on the Hill, or the unwelcoming-to-beginners madness of the XCOM board game. Sherlock Holmes: Consulting Detective is always one which has managed the physical elements well, even if it doesn’t classify as a board-game by board-and-components standards. This new version is no exception, leaflets, fold-outs, and hand-outs are core to the game experience. 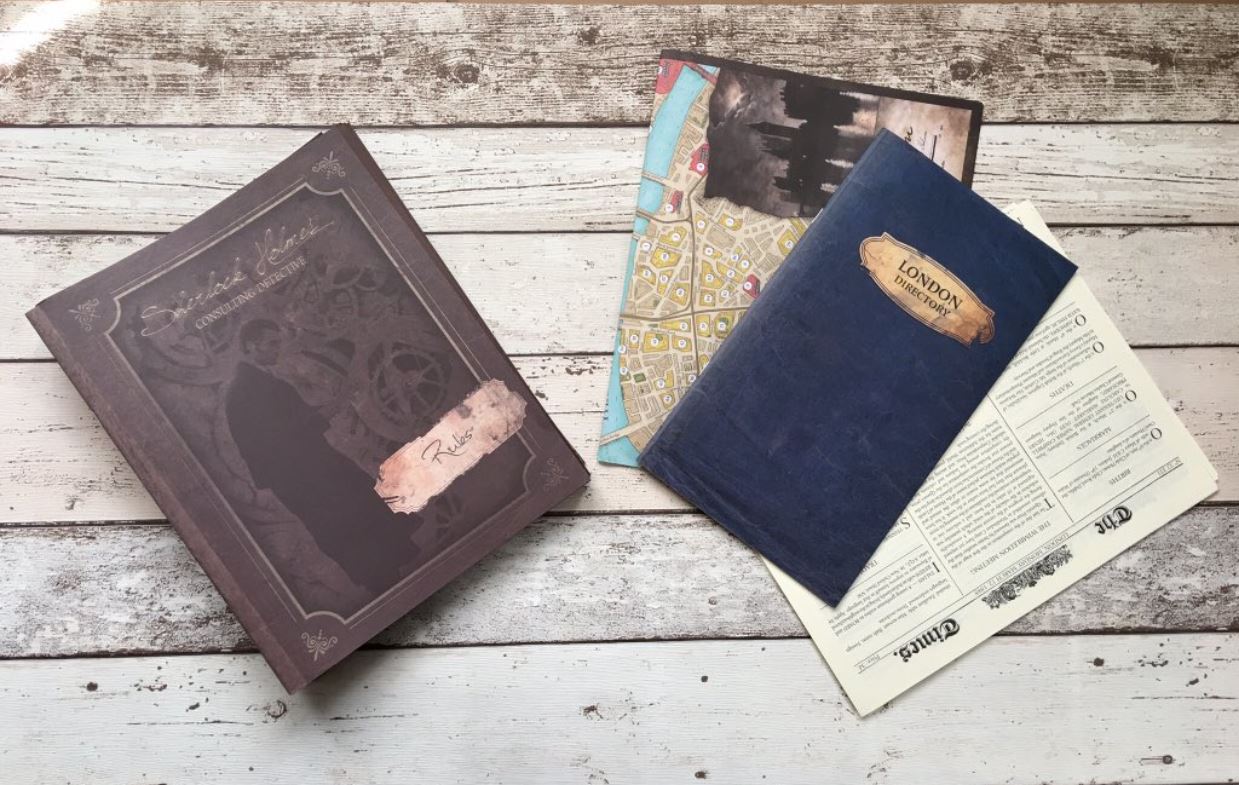 The game box, as with the original, contains a plethora of paperwork; a rulebook which also introduces each of the bonus characters players can visit for clues. On the back of it is a summarised introduction to each, as well as where you can find them. Then, for every case (there are ten included) you get a casebook and a double-sided newspaper, and there’s also a handy-dandy map of central London, complete with a scale for working out travel times. Finally, there’s a city directory which includes the names and addresses of most of the cities residents and businesses.

Each of the handouts are printed and assembled in a high-quality manner, even the newspapers – clearly designed to be thinner – fold up nicely with no threat of accidental tearing. The booklets are tightly stapled but still naturally fall to a close, and the map is made from thick enough paper that when it unfolds you can see where to fold it, but the image remains undamaged.

So, you might be thinking, how the heck do we plan to play such a tactile and immersive game, when we are essentially at opposite ends of the country? Well friends, that’s where Google comes in. With Dann on his iPad and Matt on his laptop, we each setup in our rather (un)comfortable chairs and prepared ourselves to do some consultative detecting.

Unsurprisingly, it would have been nigh-on impossible to play the game entirely as intended, with players taking turns to choose where to investigate next and passing around the casebook and other material. So instead of the formal procedure described in the rules, we decided to approach the game in a conversational, collaborative kind of way. Thankfully we each had a copy of the game to hand, which ensured that neither of us were reduced to the role of note-taker, and enabled us both to investigate clues and re-read those we had already visited. 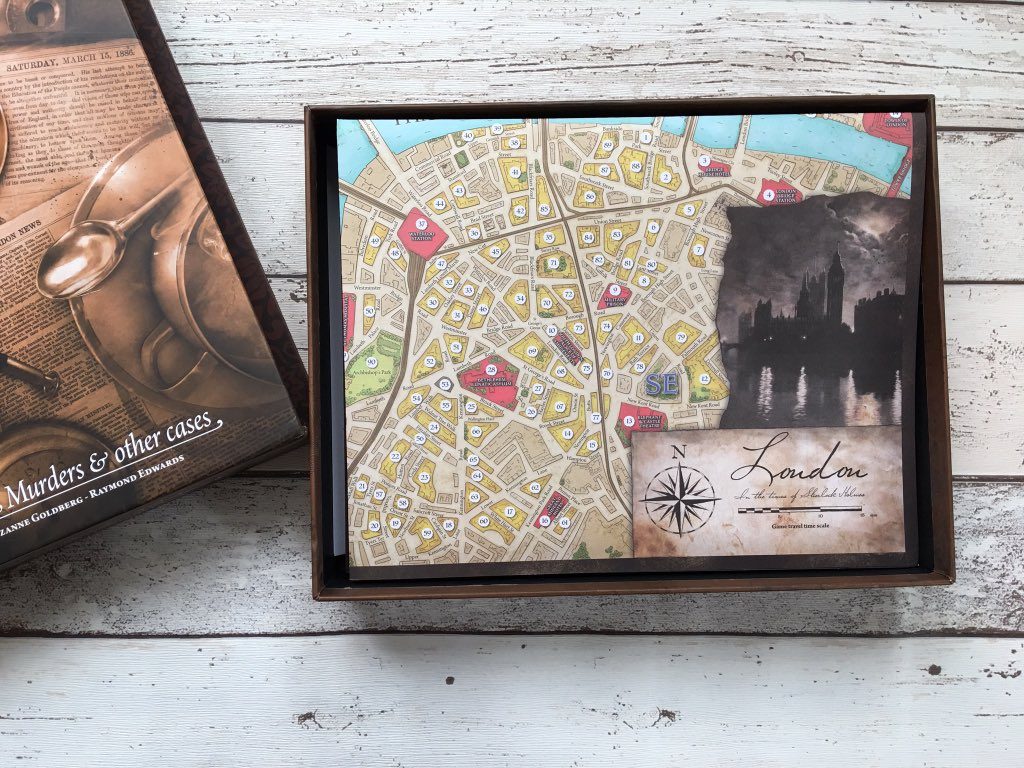 Having both completed Case 1 and 2 with our local crew, we decided to crack on with Case 3 – The Mystified Murderess. In this case, the opening text is unusually brief at around one a half pages, but the crimes come thick and fast. A murdered cab driver, the mysterious death of a tightrope walker, a series of burglaries among high society and a dazed, confused woman kneeling over a dead body, literally holding a smoking gun. It felt like it was going to be a long night.

Our informal, remote structure led to us each reading the passage of text quietly to ourselves, calling out specific passages of text such as names, clues or ambiguities. We then discussed how to proceed and decided that the best plan was probably to head straight to Scotland Yard. From there, we visited doctors and lawyers, lovers and relatives, shady backstreet gambling houses and all the rest of London’s 18th Century inhabitants, from the loftiest to the lowest.

Unfortunately, Sherlock Holmes’ himself was written to value astuteness over busy-work, and in Consulting Detective, the same can be said of the scoring mechanism. The more clues you follow, the lower your score. As a result, even though the B3 team of Dann and Matt solved about sixty percent of the questions posed by Sherlock, we visited so many locations in our search that we scored minus fifty five points.

Despite this seemingly low score, there is a certain satisfaction to be had in solving the crimes in Consulting Detective. We didn’t work out what happened to the tightrope walker, but we did manage to work out who was burgling the richest among London’s society dinners, and we also learnt several details about the titular Mystified Murderess, albeit not what actually happened or who did it. 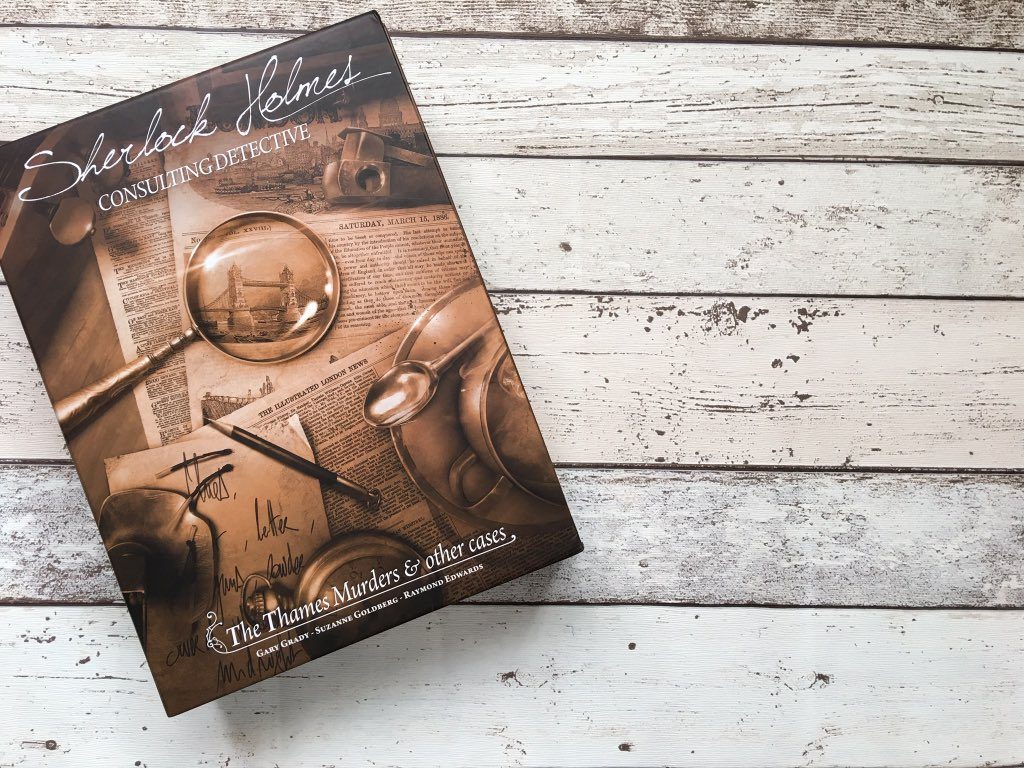 In the closing notes of every case, the clues Sherlock followed are explained, and just as in the reveal at the end of any episode of Poirot or Columbo, the case unravels before your very eyes. Everything falls into place, and we certainly realised just how many useless blind alleys we had followed, but more than anything, we lamented missing the most crucial detail in one of the very first passages of text that we encountered. C’est la vie.

Whilst Consulting Detective delivers immersion into the world of Sherlock Holmes in a way that I don’t think any other game structure could, our playthrough was not without some hitches. The very first passage of text caused both Dann and Matt to ponder who was engaged to who, and this confusion was compounded by a later witness who gave a contrary account. It read as if an affair was taking place, which we naturally felt was relevant, and yet we found no means to explore it further. Similarly, we found other minor issues among the written statements in the game, and yet it didn’t spoil the experience for either of us.

In closing, this new iteration of Consulting Detective is a fantastic example of what a cooperative game should be, and despite our novel way of playing it using video chat, it felt every bit like solving a complex, communal puzzle. Playing alone is entirely possible, as is playing with four or five friends at a single table, each perusing documents and papers for clues and working in turns as per the instructions. Almost unique among board games at nearly forty years old, Consulting Detective reminds us that however you play, the reason for doing so is to have fun with friends, and few games do that better than this. The matter of purchasing is elementary, my dear Watson.