Cavern Tavern review — It’s your round 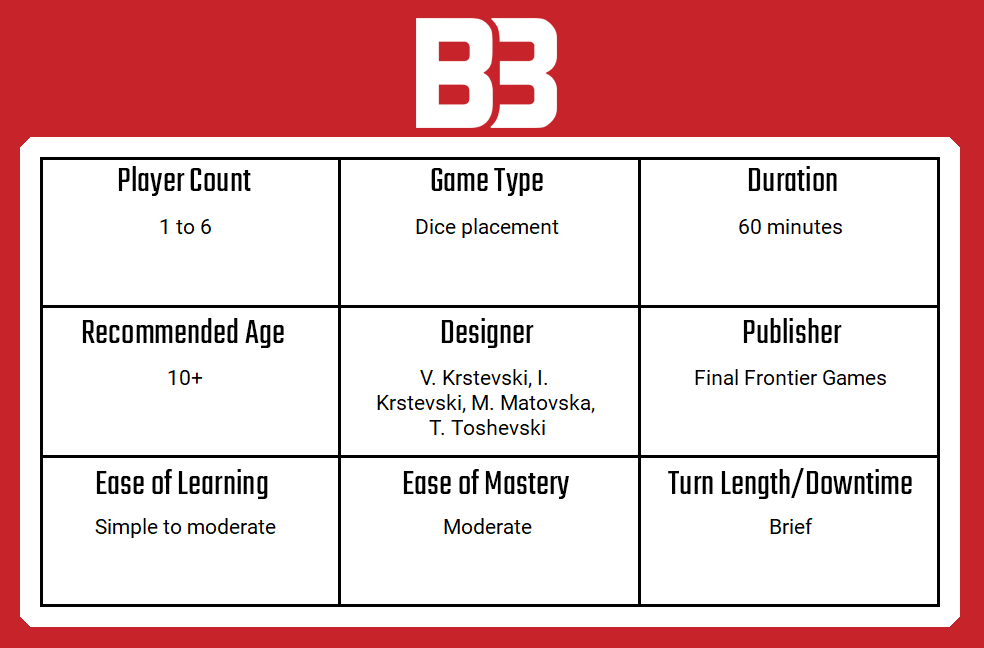 Earlier this year, we spent a fair bit of time attempting to Rise to Nobility, which is the second game from Macedonian publisher Final Frontier Games. FFG’s first game, Cavern Tavern, is a fictional public house that actually exists as a worker-placement location within Rise to Nobility, but what goes on inside? If you’re as curious to find out as I was, then keep on reading — Cavern Tavern is today’s tabletop review!

In Cavern Tavern, an unusually broad range of one to six players each choose, draft or randomly draw a thematically relevant character, each of which is a member of staff at the titular establishment. Each character has an ability that can change the gameplay quite dramatically. For example, some provide considerably more points for fulfilling certain orders, whilst others let player generate the necessary ingredients on someone else’s turn.

The aim of the game, of course, is to score the most victory points. You do this (mainly) by fulfilling customer orders within the shortest amount of time possible, but before you can do that, you will need to collect the relevant ingredients — more complex recipes usually score more points. You may also do chores or work in the kitchen to earn points and advance two matching tracks on your player board. Both of these tasks can result in points, bonus ingredients and even more powerful effects like being able to manipulate dice.

On that note, the method you use to collect ingredients and work in the tavern is placing dice. Each turn, players roll the dice of their colour, then take turns to place them based on the values rolled. Basic ingredients can be drawn with a single dice, with each pip value offering two different ingredients to choose from. Pairs of dice are usually used to do chores or work in the kitchen and a handy player aid shows what values of either one or two dice can generate which ingredient, which is very handy.

There are also one or two spaces where players can manipulate the mood of their boss (Nasty the Dwarf) or draw item cards offering powerful benefits and effects like removing a customer and drawing another one. There are several interesting features in Cavern Tavern that add to the thematic relevance — firstly, there’s Nasty himself, but there is also a clock that indicates the time of night and tracks when orders were picked up, ending with ‘last orders’ to indicate closing time. 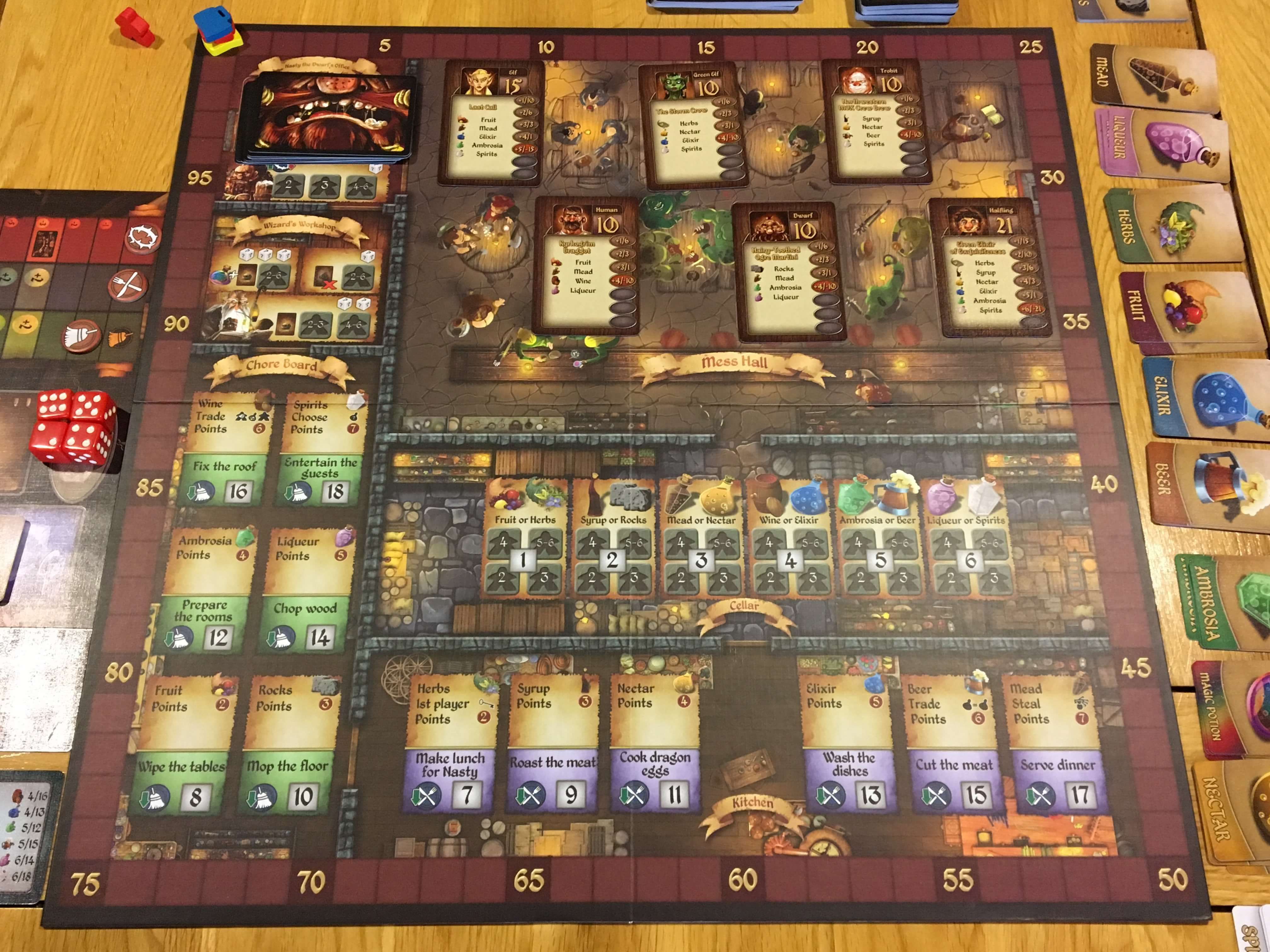 In terms of how everything is presented, Cavern Tavern is very impressive. I often read or watch reviews in which people complain about box size — whether it’s too big or too small. Cavern Tavern has a box that is probably just about right, but it’s absolutely rammed with really well-produced stuff. From the completely unnecessary wooden key that marks the first player token to the myriad of cards, boards and dice that make up the game itself, there’s nothing I would say feels out of place or unattractive.

The board is fairly large and very clear, with a tap room in which guests congregate and order cards are placed; a cellar from which to draw ingredients; a kitchen where players carry out chores; and a side panel with other jobs and dice-placement locations clearly marked in their own sections. The artwork is delivered in a grimey, richly detailed comic style which is carried throughout all components in such a way that it really does immerse the players into the theme very nicely. Played in low light with a glass of beer or wine, you’ll feel every bit as if you’re in ‘The Prancing Pony’ from Tolkien’s Middle Earth.

Aside from the board, there are six sets of dice, loads of order cards and a set of wooden tokens to indicate order timing and tracking or to place on the player mats. The wooden pieces are all perfectly cut and appropriately sized, with some even featuring painted details, which is a nice touch. That said, there are only six character cards and personally, for a game that supports six players, I think that’s a bit stingy — I would have liked to see at least twice that. The dice are bright and well made, with above-average weight and a nice feel when rolled.

Finally, whilst it’s generally possible these days to learn a game from a tutorial video (of which there are several for Cavern Tavern) I do tend to make sure I learn from the manual whenever I am undertaking a review. Cavern Tavern is a simple game that comes with a suitably brief set of instructions which just about do the job, but sadly they are not quite perfect. Some of the rules themselves seem underdeveloped (which I’ll cover in a bit) but I also think the manual lacks examples and visual guidelines that might have made the game even easier to pick up and play. 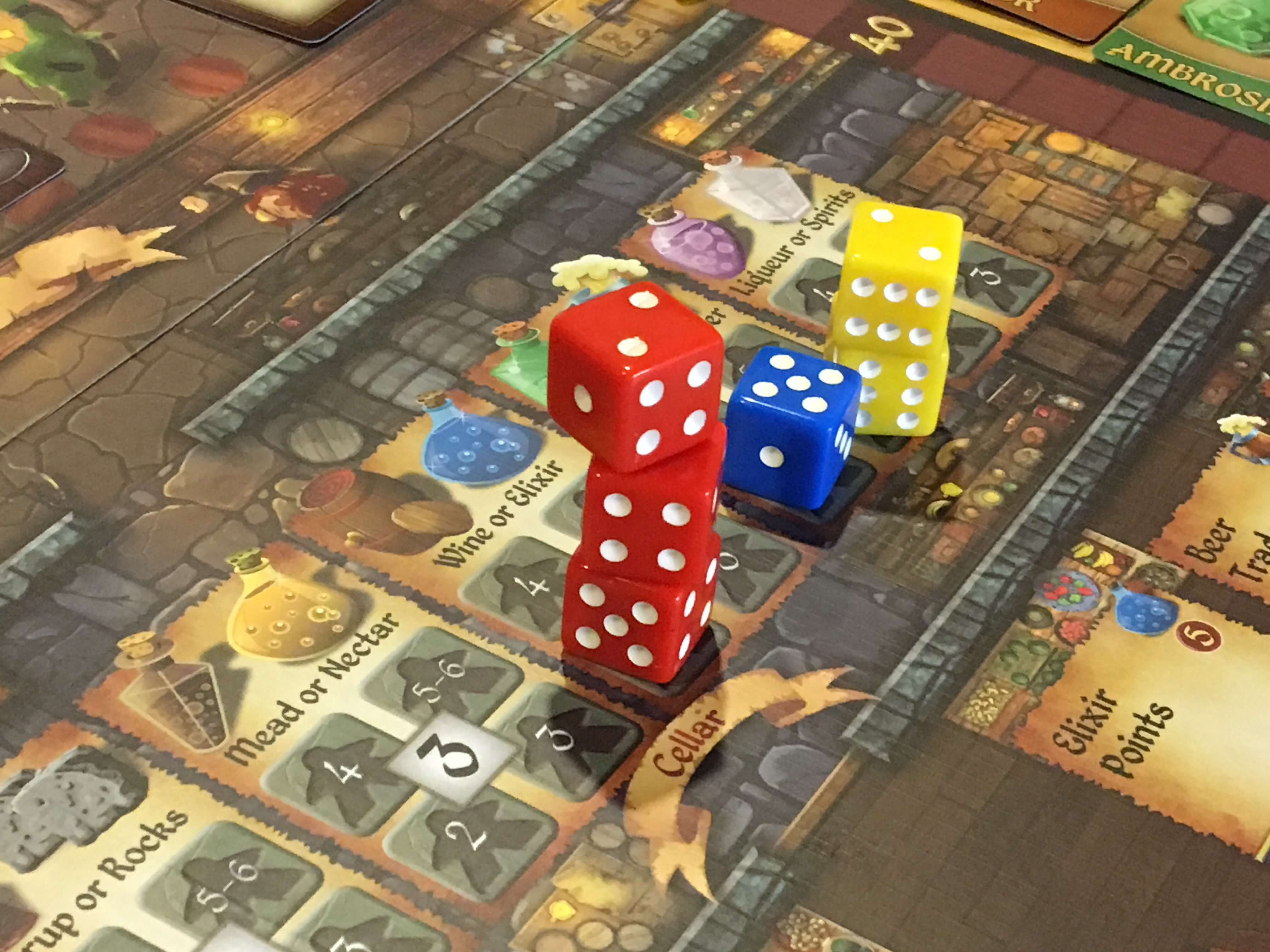 Cavern Tavern is split into ten rounds, each representing a period of time during which guests arrive, orders are placed and the normal operation of the inn takes place. At the beginning of a new round, all players roll their dice and, based on whoever has the lowest score, one person gets to roll a fifth die in a neutral colour. Beginning with the first player (determined randomly at first and based on taking a specific kitchen action later) the players then take turns to put dice onto the board.

The value of your die determines which locations you can use. For example, to access thematically better-quality ingredients, you need to roll a five or a six. In actual fact, though, because there are very few ways to modify the outcome of a die roll, you’ll need ingredients rolled on a one or a two just as often as you will a higher number. Cavern Tavern does let players stack dice for a cumulative value (which is necessary on kitchen and chore spaces anyway, since the lowest value space is seven) but there’s no way to claim a space worth a lower number without making significant progress down the chore or kitchen track, or by using an item.

Taking an order is always a free action, although you can only ever have one. The only time you may not want one is when a round is coming to a close, since picking one up that you can’t complete means it will not only be worth fewer points when the round timer moves on (to indicate the customer being dissatisfied) but will also move you further down your Nasty track. At certain points in the game, being worse on this track will force you to draw cards that waste your time and/or ingredients, or have other negative effects.

Play continues with each player placing one or more dice to take an action, then passing to the next player until no one has a die left to place. At this point, the round is indeed over and the clock advances. The last-placed player takes the bonus die, Nasty tracks are updated and Nasty cards handed out. If it’s the last round, there are some additional scoring elements to take into account, which can include a huge penalty for unresolved Nasty cards or a small bonus for ingredients held when you finish without an open order. 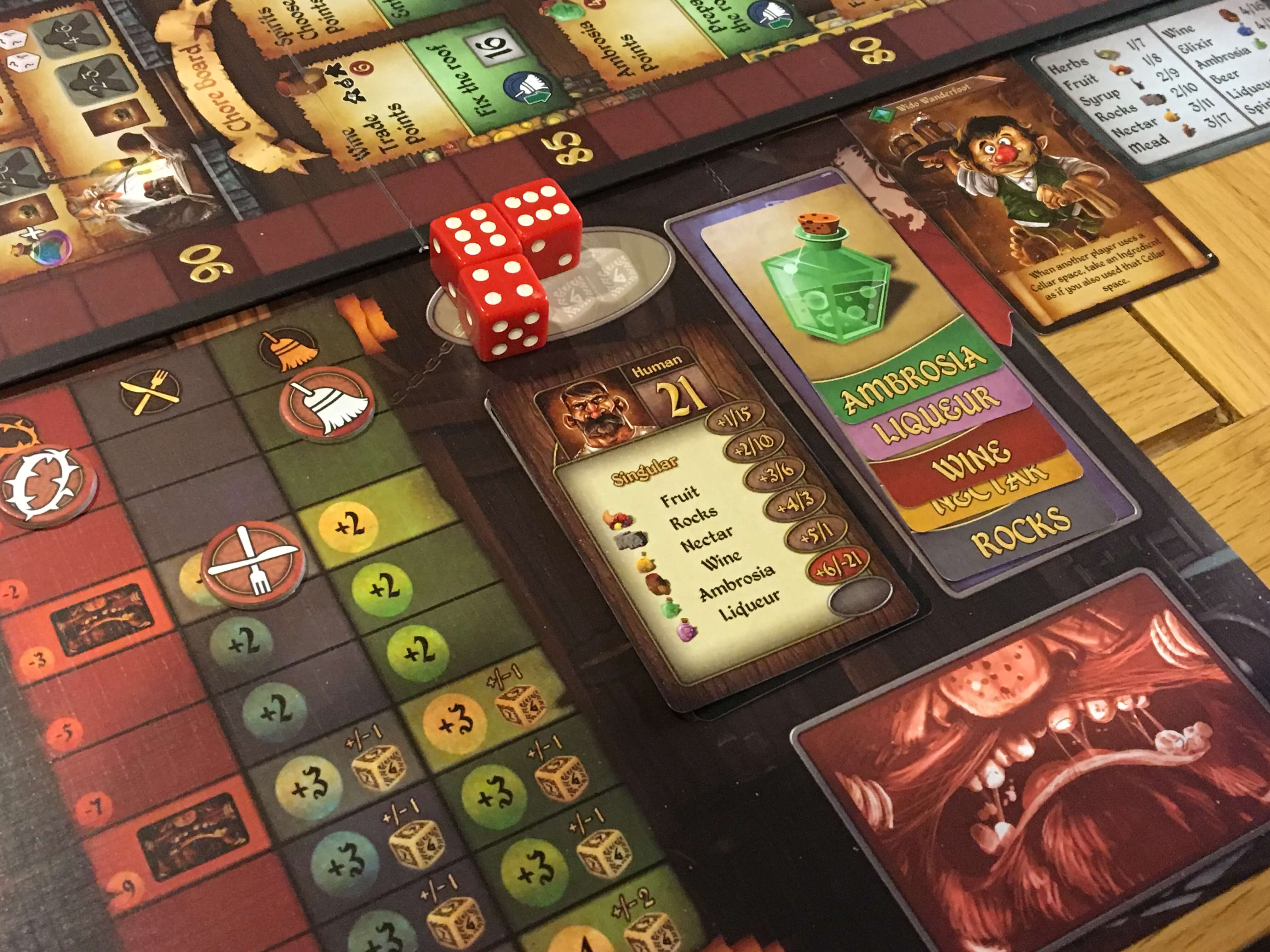 There are many things I like about Cavern Tavern and just a small few ones that I don’t. Let’s start with what I think it does well.

For starters, Cavern Tavern is a very attractive and thematic game that really captures the feel of operating an inn, serving customers, dealing with a grumpy and oppressive boss and so on. The dice-rolling and placement method is fun and fast and, whilst it isn’t deeply strategic, players will usually be able to plan the two or three things they want to do each round.

On the negative side, I think there are a few aspects of Cavern Tavern that could benefit from further development and which are improved with the odd house rule. Take the lack of an ability to easily scale dice down — after two or three games, I simply introduced the ability to use two dice and subtract one from the other to introduce just a little more flexibility. Worse still, I think, is the fact that a player who is already struggling to fulfill an order is likely only in that position because of poor rolls. Compounding this with further punishment via the Nasty track can make Cavern Tavern quite unfair.

Now, with the house rule I’ve just proposed and the addition of the neutral die for last place, I do think that Cavern Tavern is quite good fun. Adding items (which are drawn in exchange for two dice of any value) into the mix does add an amount of variety, as do the character cards. Across the groups I played with, we did find that a number of these characters were a little unbalanced. Again, this leads me to think that whilst Cavern Tavern is often fun, it doesn’t always offer the deepest of experiences because it doesn’t place the players in total control of their destiny. 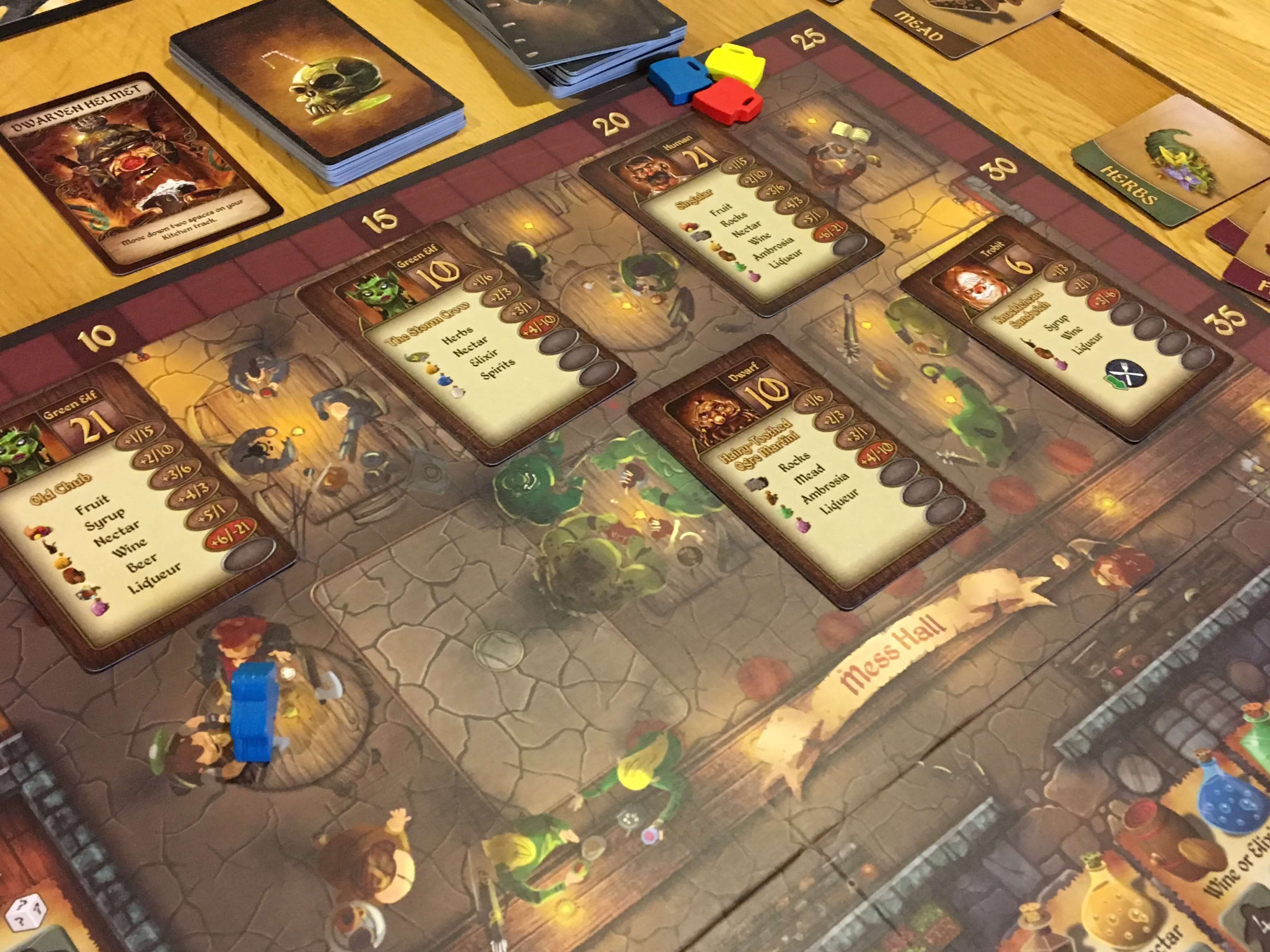 I did enjoy Cavern Tavern quite a lot, but not for the kind of deep, thinky, gameplay reasons I normally look out for. Instead, Cavern Tavern is a thematic, lightweight and fast worker-placement game that can’t be taken too seriously. It has an addictive gameplay loop and I do love how nicely each phase and process in it is so well linked; it’s just a shame there are some slightly inelegant features in the actual gameplay functions. Still, you could do much worse if you’re looking for a light worker-placement game that looks very enticing when laid out on the table.

A copy of Cavern Tavern was provided for review purposes. You can find out more about it on the website of publisher Final Frontier Games.