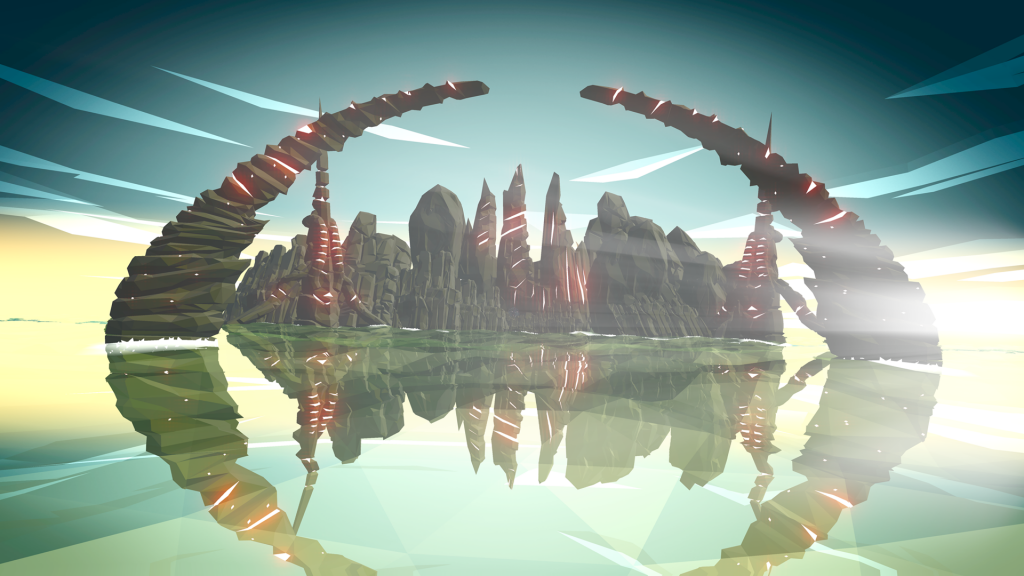 Aaero is a hard-as-nails, beat-pounding rhythm game that manages to splice together the best of both Star Fox & Guitaroo Man; a rail-shooter with the action on screen tied intrinsicly to the music, and a system that rewards you for best matching the beat.

The core of Aaero is in following a type of ribbon which changes direction in relation to the music; it’s a system not wholly dissimilar to the analogue-stick led ‘combat’ of Gitaroo Man, and -as I feel I should say right here at the start- the game similarly requires analogue-stick input. Which means no keyboard and mouse, at least at the moment.

It’s staggeringly good fun, and staggeringly fast, with modern (urgh – ed) music laying down a rapid, beat-ridden path for you. The benefits that come from such pacy, upbeat tracks is in the fact that the game’s enemies, and various challenges appear in time with the songs; simply put, if this was a slow saunter along to a somber, sax solo then the game’s pace certainly wouldn’t match either of the genres that the game straddles.

Visually, the game is stunning, which is always a plus with rhythm based games as they tend to burn themselves into your inner-eye due to the level of concentration they tend to require. Of course, Aaero straddles the genre line well, and in many ways it transcends the ‘music game’ element of it quickly; like Vib Ribbon, Rez, and Dance of the Necrodancer, rapidly becoming a case of you having to absorb the music, but actually engage -and in many cases be led by- what’s going on on screen.

The impressive visuals were matched in kind by the game’s performance. My computer is mid-range, but the game still loaded quick, and ran silky smooth. 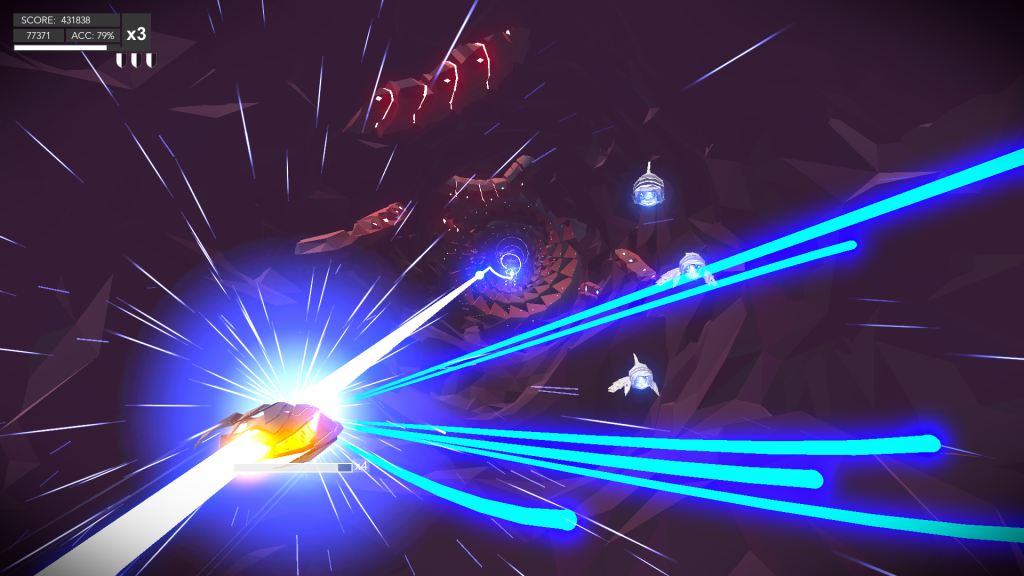 Gameplay, then. It’s really simple in concept, the entire controls are handled through the two analogue sticks on the controller, one moves your ship around the outside of the screen, the extremes of the axis moving you to the relevant position on screen. The right stick is then used for your aiming reticle to lock-on missiles ready for you to release in time with the music. It might sound complicated, and for some it’ll certainly take some getting used to, but the game does hand you very obvious clues as to what is coming up next; enemies appear well before they line up for attacks -like enemies in Shmups- and the ribbon you trace along is visible ahead of you in the level.

There’s various modes in the game, with advanced and master modes vastly more intense than the starting normal mode, but locked until you have scored enough rank stars in the game’s levels, which covers a soundtrack of 15 tracks. There’s also a chillout mode which can still be failed, but gives you the chance to practice on a track of your liking.

Each of those 15 tracks are all based around thumping, thudding, electronic music, each track is fully licensed, and made by bands known in the genre; including Noisia, Flux Pavilion, Katy B, The Prototypes, Neosignal, among others. Although the style of music isn’t really my cup of tea, I confess that I was tapping along and nodding my head as the levels went along; though I do feel that if I’d not been doing so I’d probably have bounced right off of the game. 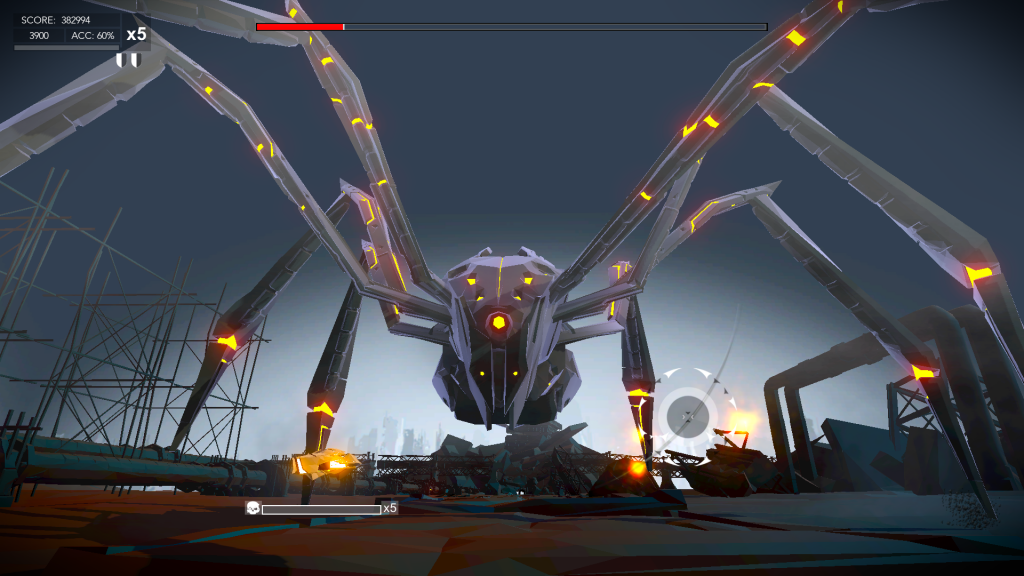 It’s not all small, flying gnats, and chasing ribbons though. Closing gates, and various traps are out to end you, giving you plenty to duck-and-dodge as you work through the levels. Oh, and those gnats, they’ll (much likely everything in the game) kill you in one hit, and you’ve only got three lives to play with. Then, of course, there’s the massive bosses, gigantic robot landsnakes, shuttle-clutching sea squids and more. That’s really where booting up into Chillout mode comes into it’s own, and gives you the early edge for those first, formative runs.

Aside from the potential to unlock new difficulties, and the -nowadays expected- trophy/achievement system, there’s also an extensive set of leaderboards. They currently place you based on points gained through strict obedience to the mechanics. It’s a shame that there’s not a best play ghost option, that you might compare your runs, something that would be a pretty good feature considering the game’s single ship ensures that topping the leaderboards is a result of skill rather than loadout.

Hopefully additional content -more songs, or even a track importer that populates a tunnel with enemies based on the track’s wavelength- will follow in the future. But, as the existing package it’s still got plenty of challenge in it to keep fans of the arcade and rhythm genres busy for a time; Mad Fellows have done an exceptional job of making a mixtape into an enjoyable music-shooter.