Super Blackjack Battle 2 Turbo Edition is a game first and foremost about Blackjack, (the card game where you need to get to 21 or closest in value of the cards that have been dealt to you but your not allowed to go over 21) which uses the aesthetics of the original “Street Fighter II“ and it works really really well.

I confess, the game won me over with nostalgia; the 16-bit card-game erupting, like its fighting-game inspiration, the word “Fight” from my  speakers had left me grinning ear-to-ear, but then there really is no fighting, it’s just the next round with me getting ready to decide whether I’m gonna need to “stand” or “hit” and that’s all there really is to it, but it is good at being a casual game as you don’t need to have lightning reflexes and need to stay calm in the heat of the moment, and no doubt the AI will bid too high ‘n lose it all just like it does 95% of the time as it’s the one thing that kills this game. The AI. 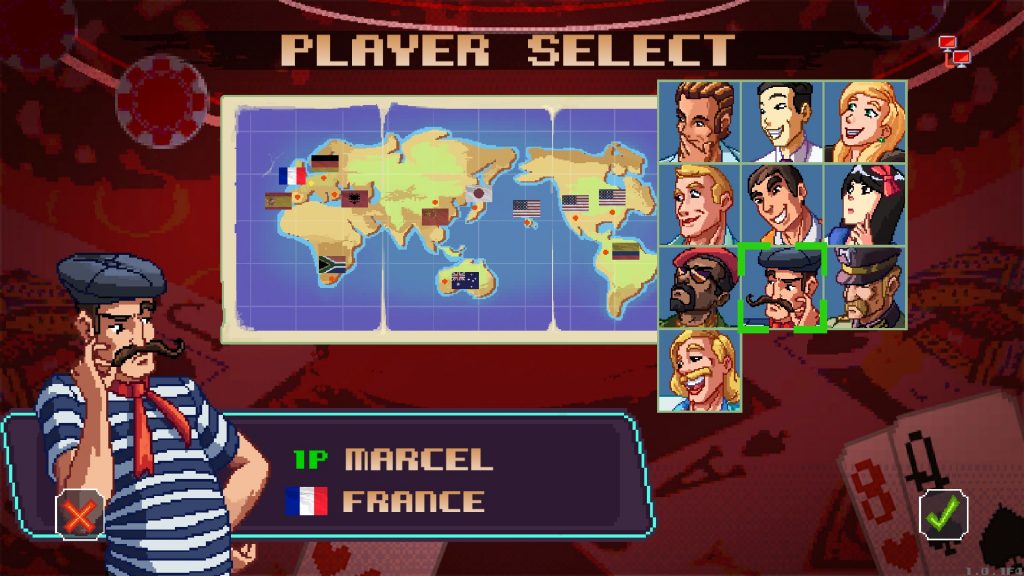 I’m gonna start with graphics and sound for this as this was the main thing that kept me playing for the majority of the time and to note, yes I loved Street Fighter II back in the days of the SNES and I don’t think I played a fighting game since, well maybe the Mortal Kombat series but anyway, the use of the Unity engine works wonders on a game of this scale, As the game is about a ‘world’ tournament the various characters all come from different regions of the world – including the several that you unlock from completing the story with specific characters. Sadly, each of the characters lacks almost any trace of a back story; reduced instead to slight stereotypes of their relevant nation. This is probably the most shallow area of the game, while it’s completely irrelevant to the game’s mechanics it’s very strange that a game that has taken so much pride in its style and aestehtic has completely skipped out on character history. With no past, or even future, they are reduced to their nationality; and in what -especially with what is going on with the world- a strangely nationalistic way the characters talk to each other after the battle as if it’s the quality of the nation at stake, rather than individuals, insulting the other nation, stressing inferiority.

Of course, this could just me being sensitive, because of what is going on. Back in the 80s a little bit of patriotism and nationalism was present in all of our lives. In a modern game -even one that looks back as much as this, with it’s fantastic style- it feels a little out of place, especially considering the obvious flippant nature of all of the dressing around the card-game core.

That 90s influence runs deep, but not so deep that it leans on stereotypes and visual slurs with competitors. You may describe the characters in this as a rather plain looking selection, but the fact it doesn’t lean on thick-lips or slanted eyes for definition of nationalities does stand out as a plus to me vs the character selection screens of old. 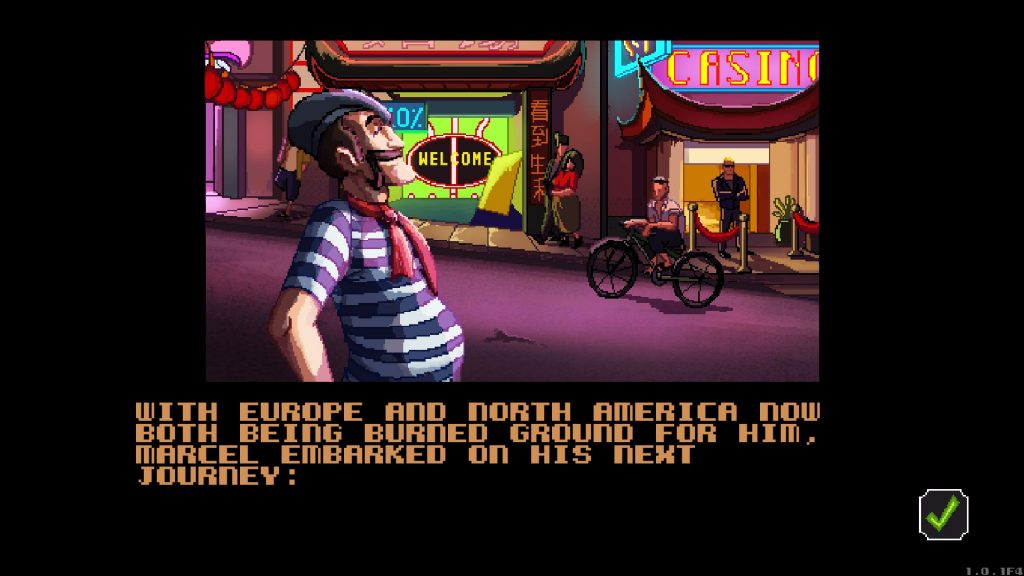 The game is split into 2 modes. In “Single Player Combat” or story mode as I’ve been calling it, you travel the world beating your rivals in a game of Blackjack, and the player with the highest amount of money after 10 rounds is the winner. If a player looses all of their money before the 10 rounds are up, they lose. Fear not though, if you do lose, you get infinite continues anyway, so you can try the level again. Once you’ve beaten all the characters from around the world, you get rewarded with a nice 16-bit cut scene.

Another mode that is available is called, “Simply Blackjack”, which personally, is my favourite mode. In that you select character and country (which changes the backgrounds setting and the background music relevant to that country) and then just get to the core of the game. When you sit down and face off with the dealer, your goal is simple; get as much money as you can while adhering to the rules of Blackjack and progressing upwards on the leaderboards. That is, as long as you’re connected up to the server – that said, when you’re not it’s easily noticed. A red screen to represent not connected, and green for connected is in the corner.

Should you lose all of your hard earned money, you’re taken to a wheel of fortune type carousel, an event which selects what money you get to start off with in the next round; usually this is $1,000 each player.

There is a multiplayer mode, but I never got to try it out due to not having anyone to try it out with, but the menu screen shows an unranked, and a ranked option, so it’s there’s another way to get up in the leaderboards that way. 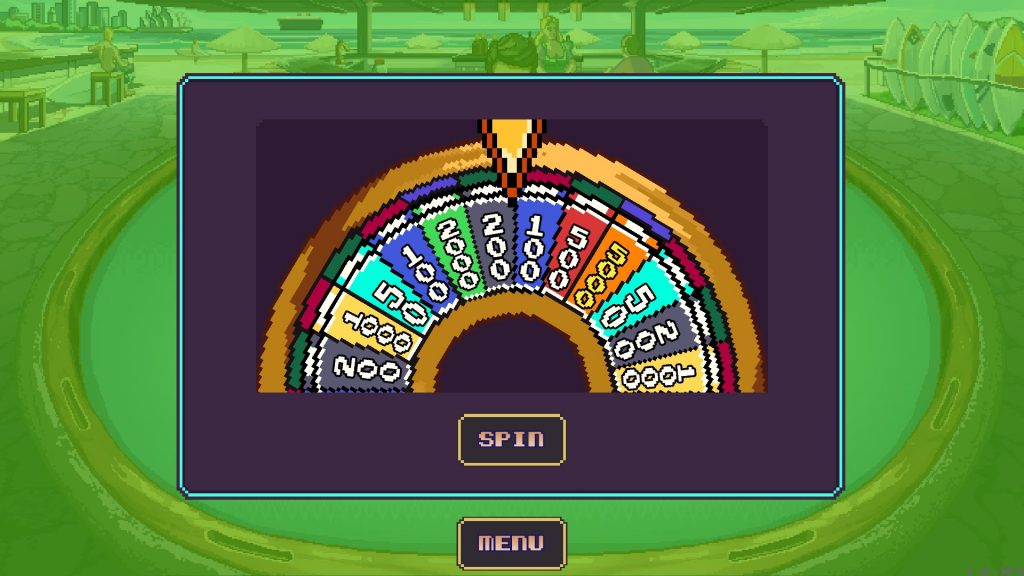 The AI is the number one negative of the game. It makes the game far too easy during “single player combat” and as a player I just kept on betting on $50 chips with each turn, but the AI just kept getting higher ‘n higher, then it started to make silly mistakes. More often than not losing it all. So, I’d just win by the 8th round through them failing to quit out on weak cards. Yes – this does make the game easy for cheevos, all 26 of them. But, it does not make an mediocre game good.

If you want a Blackjack game with a lot of character, give this a go. However, if you’re looking more for the card game, than the ‘style’ then possibly wait for it to go down a little cheaper – £8.99 is, for me, a bit much for a game that trades on retro-appeal, and suffers in the AI department. 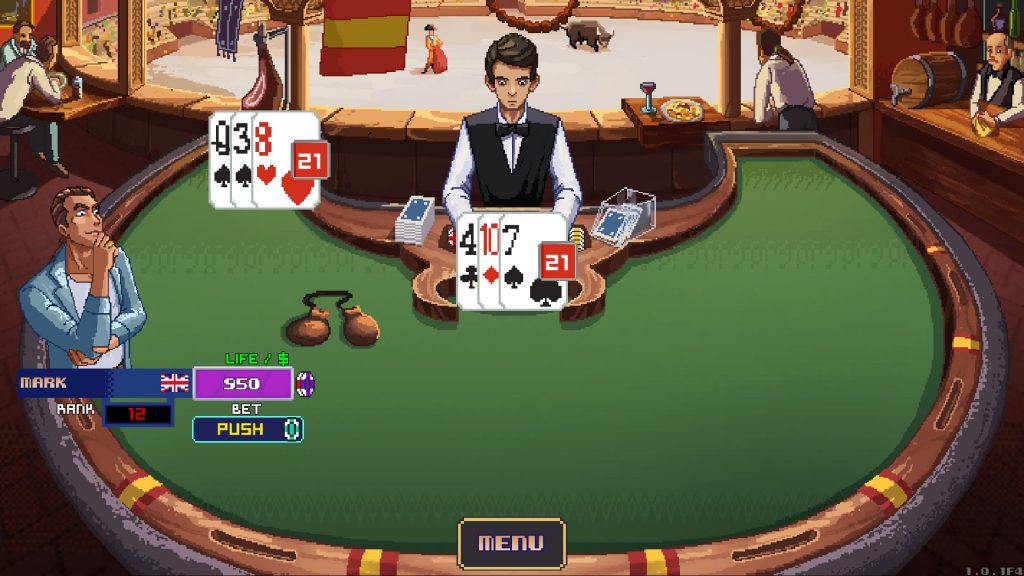