Time passes faster than you think whilst playing Pendulum, but you need to give it a chance

We’ve covered a fair few real-time board games here at B3, and more often than not, such games are chaotic, lightweight offerings. Pendulum, on the other hand, is actually fairly heavy — with worker placement, card based powers and objectives to worry about, even as the sands of time run down…

First of all, credit must be given to Stonemaier Games for taking on a project like this, to be fair to them. I know Jamey Stegmaier and his team have often been criticised for creating games that don’t fit the mould that players expect of them — which we also saw with Tapestry.

Since I reviewed Tapestry, I’ve cooled on it a little bit (possibly because I am mostly playing with just two players, which it doesn’t excel in), but I still feel that it is a very different experience to the average civilization building or 4X gameplay. Having spent a fair number of hours with Pendulum, I feel very similar about it, except that the comparison here is with other real-time games. 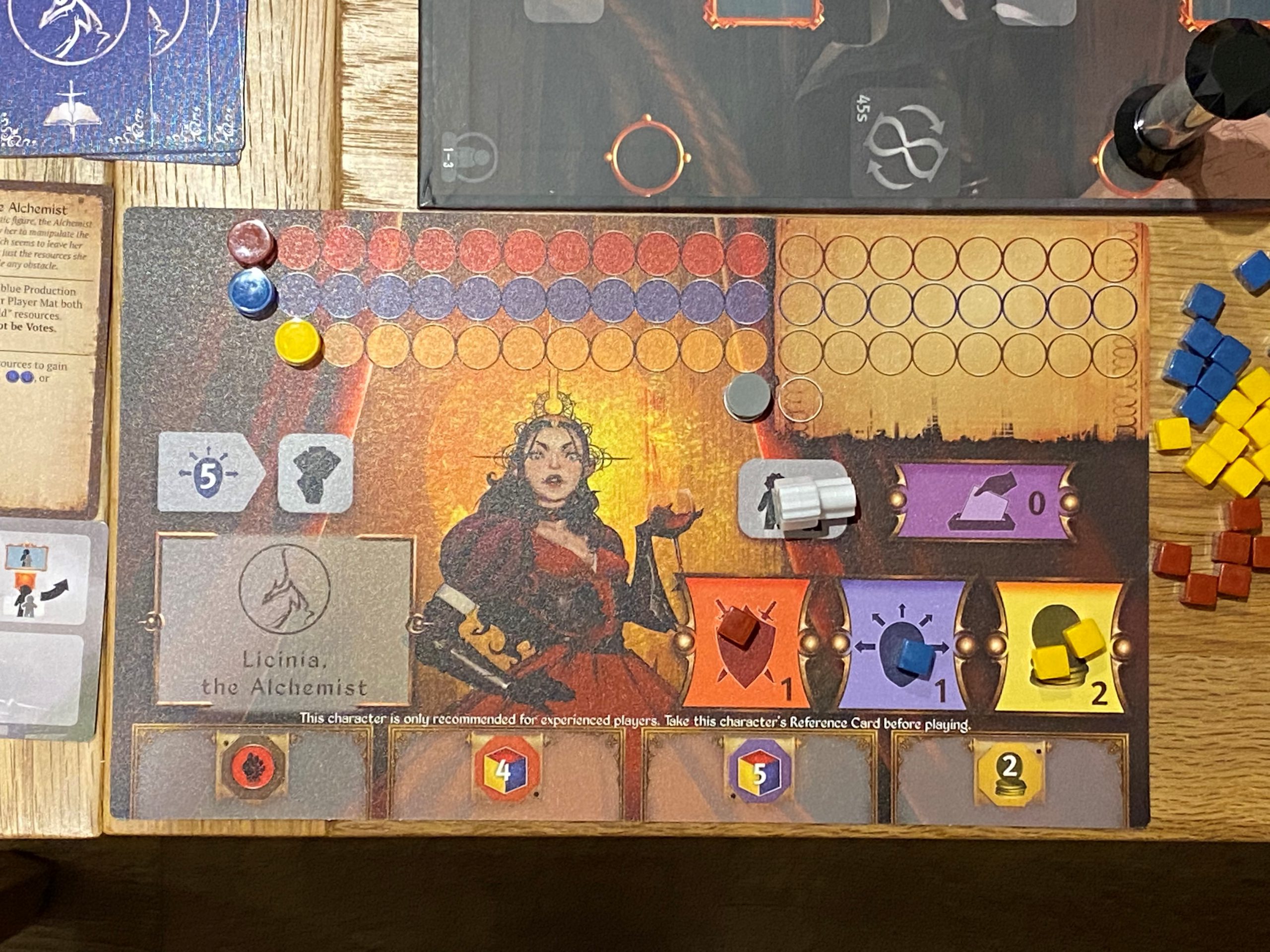 I don’t always love Pendulum and it’s definitely more worthy of criticism than Tapestry, but it definitely does enough to provoke interest, debate and perhaps even a bit of excitement from time to time. If I compare it to other real-time games that have come (and gone) from my collection, such as Paramedic: Clear! and Remnants, there’s no doubt that Pendulum offers a much more complete and cohesive experience.

With that said, I shouldn’t write a conclusion before I’ve actually walked you through some aspects of the game and provided a little more detail about how it works, since the real-time nature of Pendulum makes it interesting in several ways, as does the choice of material used to make up most of the components.

This is where I think Pendulum actually scores its first own goal in terms of how it makes players look at it and feel about it. This is specifically because a lot of Pendulum’s components are made from – or seemingly coated in — plastic. There are over a hundred cubes in blue, red and yellow that are all plastic, some twenty odd meeples (made up of regular and grande in size) and a number of other elements — vote tokens, trackers and so on. 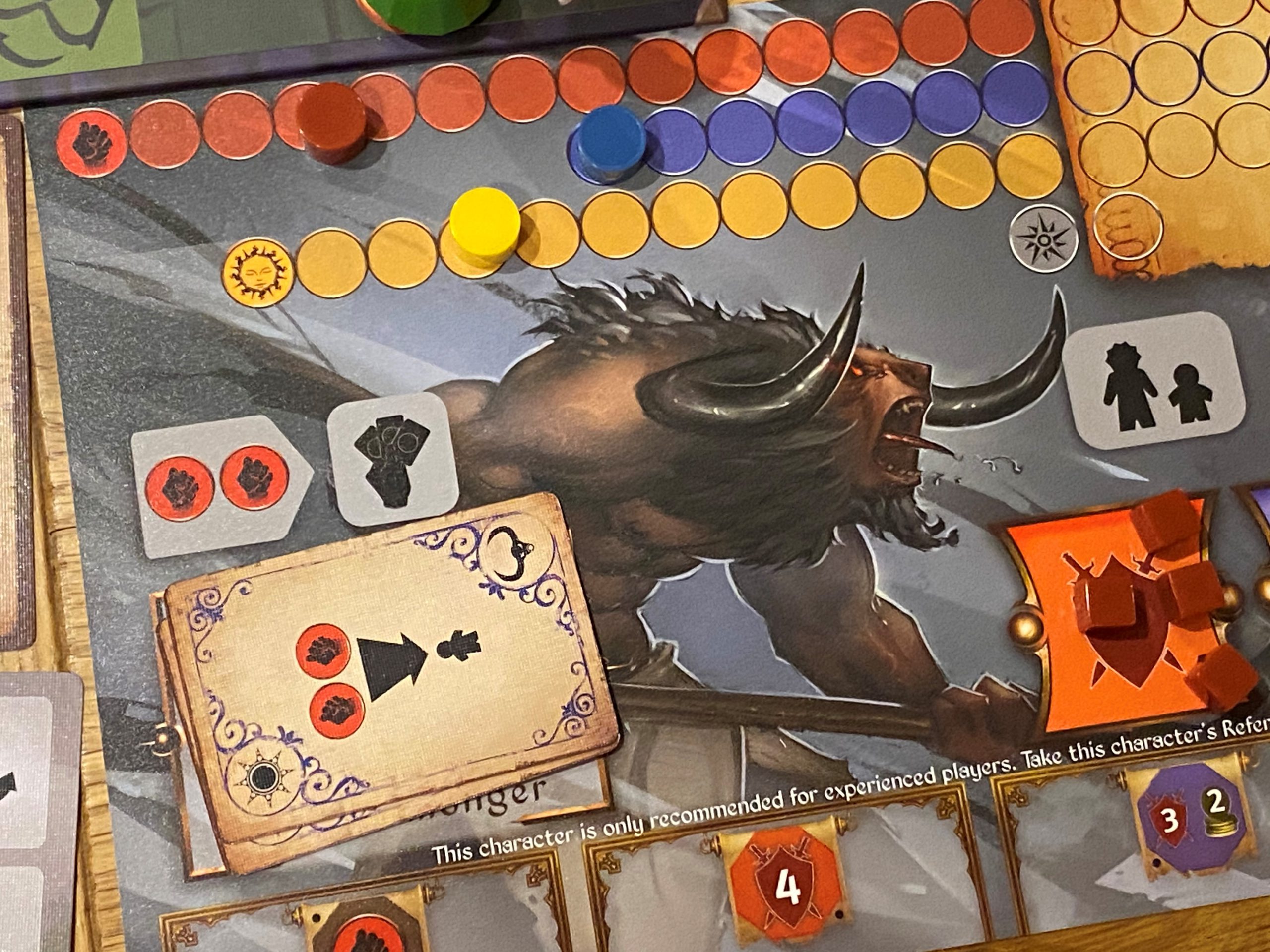 It’s not entirely unheard of for these components to be made of plastic, but I do think wood feels more welcome and traditional in a board game, so if you’re like me you might just take a game or two to get your head around this. What’s probably a bit worse is the player boards, each of which is double sided (with a basic and advanced mode for the same character) and coated in a kind of textured plastic glaze. The playing cards are the same.

Thankfully the main board, which is also double-sided, is traditional glossy cardboard, and the instruction manual, automa guide and other written materials meet Stonemaier Games usual high standards. The rules are clear, with helpful examples, and if you want to run through things in an official video, Rodney from Watch It Played has your back.

Perhaps the most standout element of Pendulum is the three hourglasses in black, purple and green. These are placed on the board in specific locations, and will “flip” between two designated spaces on each of the board sections that match their respective colour. These hourglasses seem well made to me, and I haven’t had any situation where the sand has stuck. 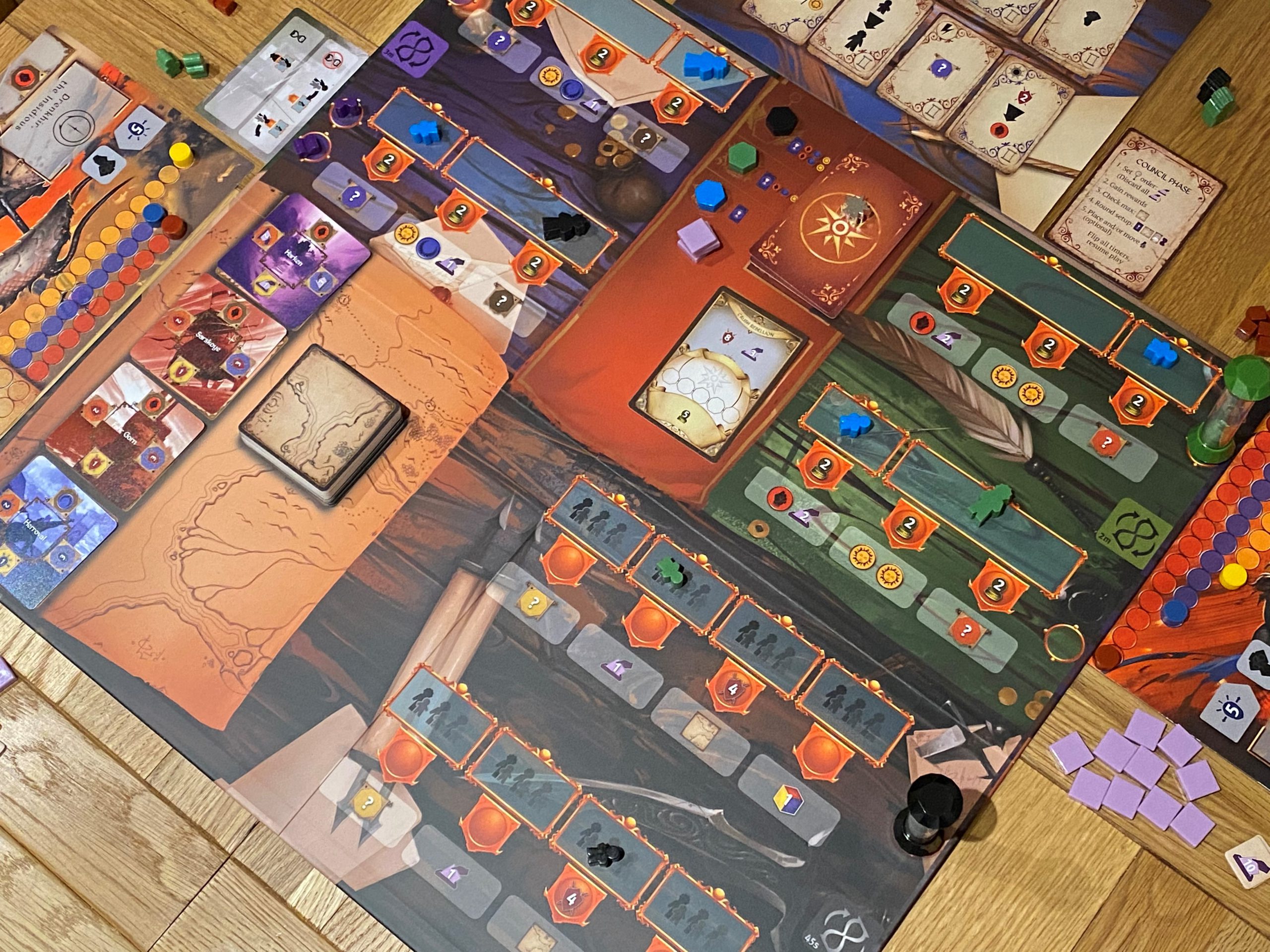 Admittedly, upon timing the hourglasses with an iPhone, there is some variance to the stated time that it should take for the sand to run through, but honestly, if you’re playing a real-time game, you should be prepared to accept a bit of chaos anyway. After all, the fun in this kind of game comes (to some extent) from the lack of certainty that the real-time aspect brings.

In terms of what players will be doing, Pendulum is a race for victory points with a twist in the sense that you will have three victory tracks (plus a special achievement that you either have, or haven’t achieved) and to win, you’ll need to focus on all three of them, rather than just one. These tracks represent the might, popularity and wealth of your character, all of which contribute to achieving the overarching goal of… something-or-other.

On that note, I should mention the theme in Pendulum, which exists in the manual and on the player mats, but is otherwise entirely absent from the game. The lore that the manual describes is reasonably detailed and quite interesting, but the game seems to drop it entirely. There isn’t a single ounce of flavour text or thematic iconography in the entire game, and in my view, this is a knock against Pendulum — even if the decision to keep that stuff out was made to make the real-time gameplay more fluid. 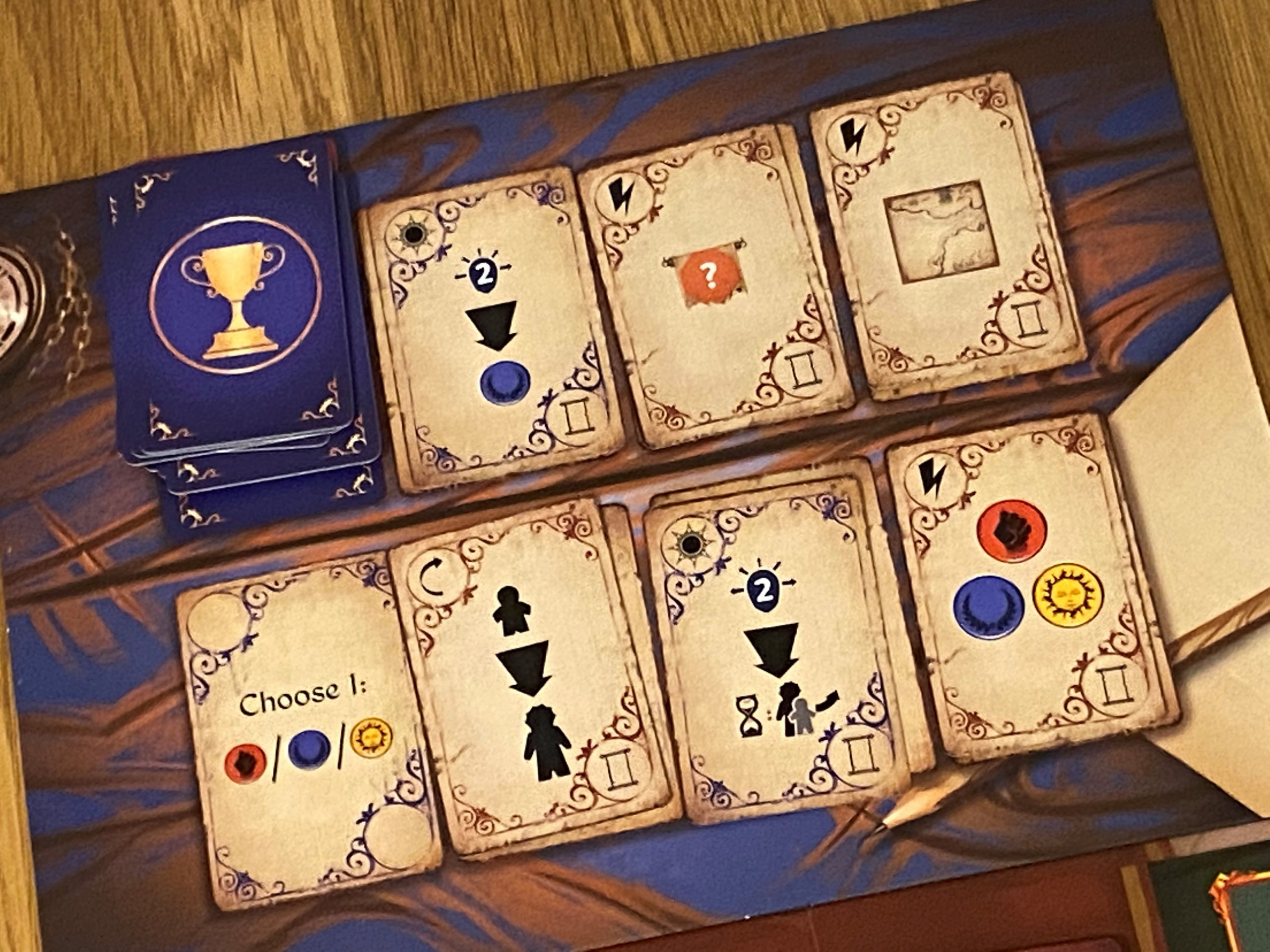 The actual gameplay, once you get started, is actually very smooth and if the overarching directive was to create a slick real-time worker placement game, then it’s mission accomplished. There are no turns at all, and instead each round of gameplay is managed to the timing of the purple hourglass. In short, each time this hourglass is flipped, the players knock a small hourglass token to the side, and when the last one is gone and the hourglass flips, it’s round over.

To make a bit more sense of what you’ll actually be doing, imagine that the board is split into three areas – purple, green and black. Each one of these is then split again into two rows of worker placement locations, with one or more actions that flow down below these spots. A worker can only be placed in a row where the hourglass of the matching colour is NOT, and the actions can only be taken in the row where the hourglass IS. Small workers cannot be added to a space with any other worker, but the larger, grande workers can be added to an occupied space.

To spell out the flow of gameplay then, once a round starts, players will place their workers into valid locations without hourglasses, whilst also taking actions using those that are now “free” having had the hourglass move away from their row. Most of the time, the players have multiple options for resolving actions — such as choosing a left or right hand box, both of which might have different costs (military strength, culture or money, for example) and then a defined outcome. 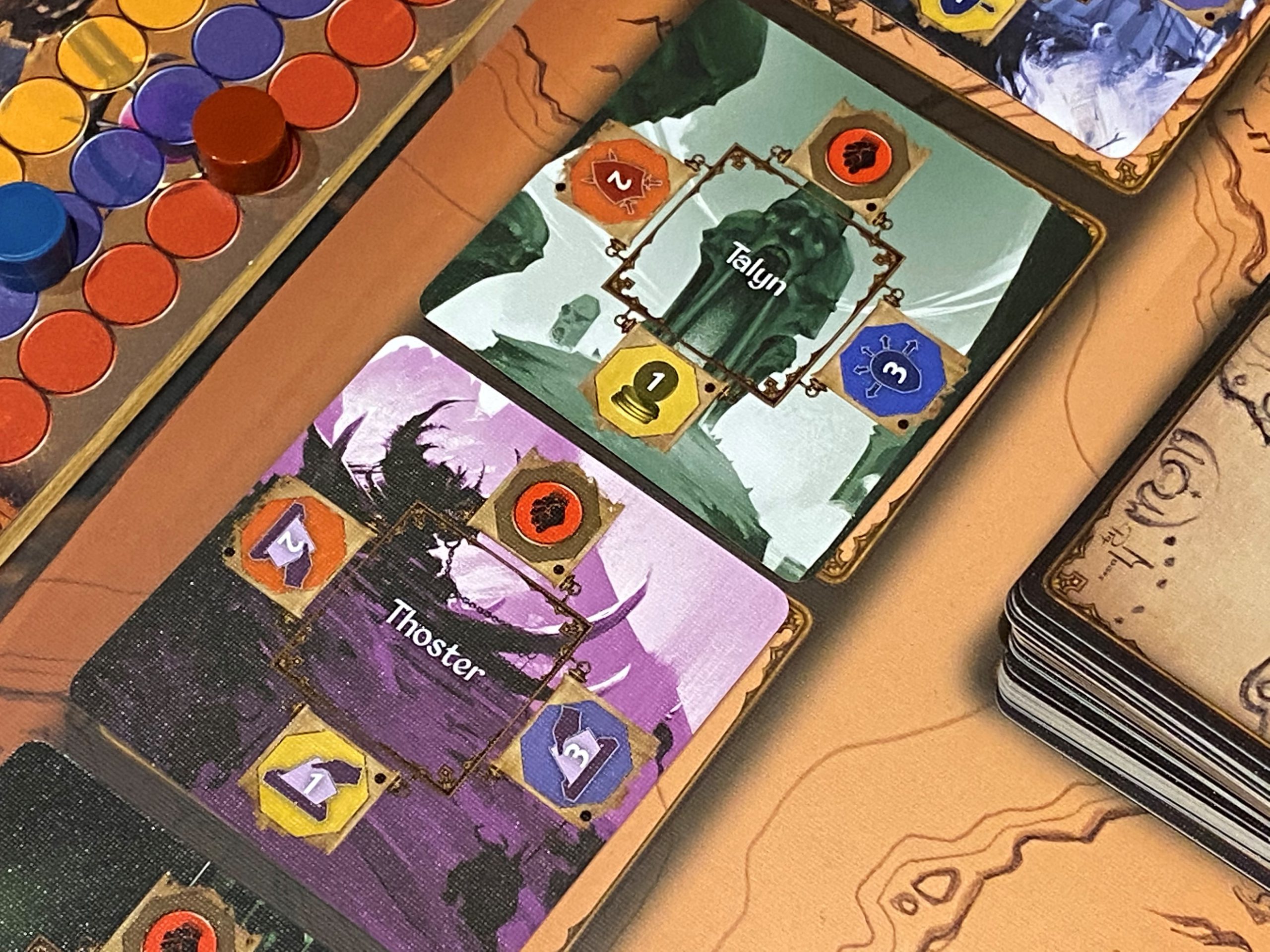 In practice, the way this works is that the players tend to have enough time to at least make their worker placements and take their actions before an hourglass can be flipped again. An experienced eurogame player will generally be able to make these decisions in the time they have, but what Pendulum does not allow is hesitation. People who suffer from analysis paralysis tend to struggle with this, as Pendulum demands very fast decision processing — hence why it has next to no writing on the board or elsewhere among the components.

Hourglass flipping in itself is at the discretion of the players — as long as the sand has run down fully. This is where the main contention of the real time element comes into play — because if one player is faster than the others (or worse still, one is slower) then the imbalance begins to show through. There is a “turn based” option in Pendulum, but it takes away the really interesting and unusual aspect of the game and I found it useful for teaching, but not playing.

A potential problem with Pendulum is cheating — intentional or otherwise. Each player will step through their own turn, and must take the rules of the game into account on their own. This is mostly OK, such is the graphic design, but occasionally workers will be placed where hourglasses are still in place, or actions will be taken where they are not. Sometimes, the flow of an action in terms of sliding down one of the flows will also go wrong — a resource won’t be paid, or whatever. 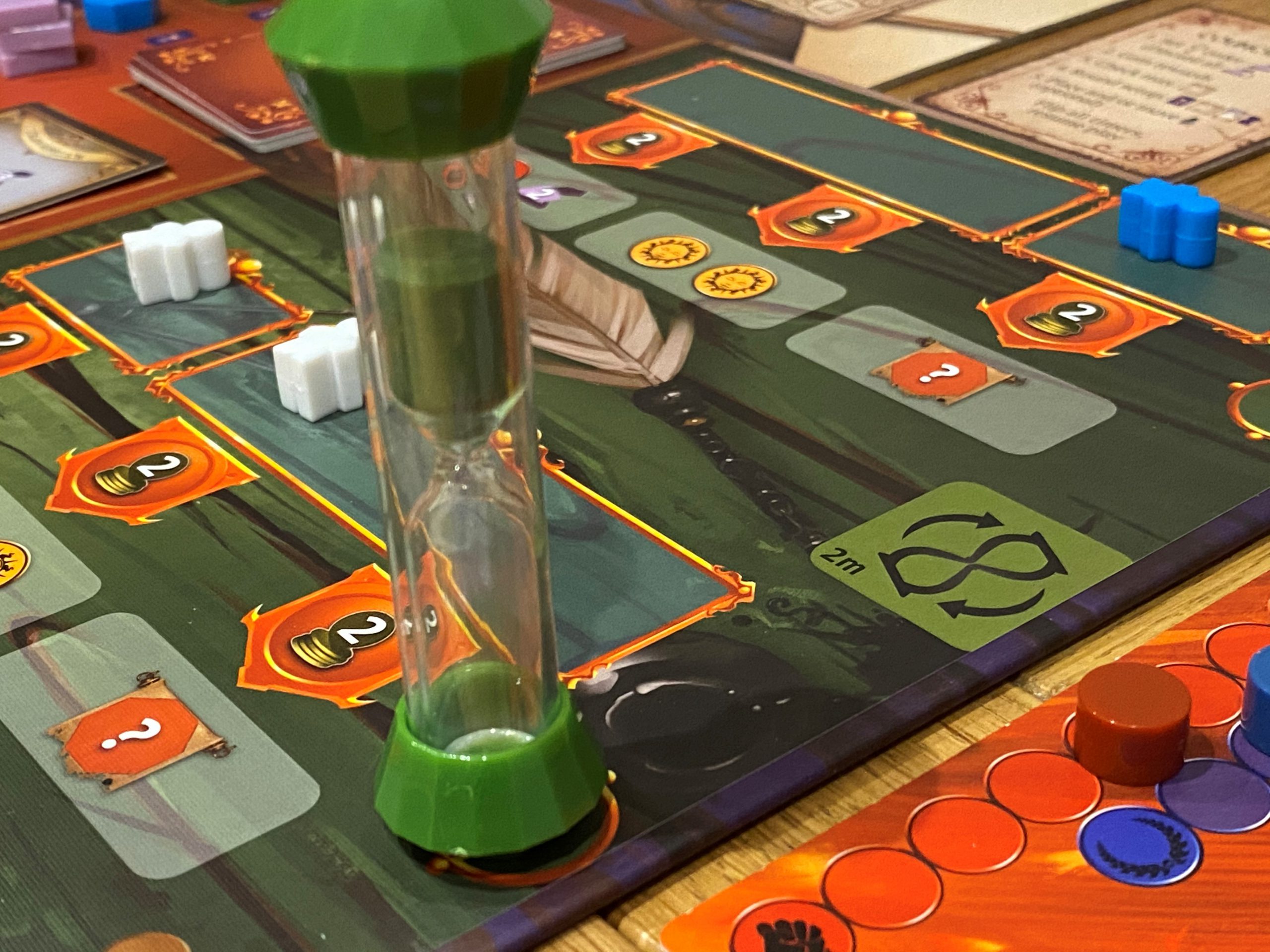 These issues are completely normal in any real time board game, but in Pendulum, the problem is compounded by the more complex nature of the eurogame style gameplay. Whilst this is a downside for some, it’s actually quite cool for others — and personally, as someone who loves eurogames and likes to keep a reasonable pace up, I actually find the pressure to make a decision quite welcome.

Pendulum is a bit of a mixed bag, then. The real time, eurogame style is both interesting and fun, but the floor in terms of skill level is fairly high, and the ceiling in terms of mastery isn’t much higher. What does that mean? Well, basically, if you can make decisions at pace then you’ve basically seen most of what Pendulum has to offer. The speed of gameplay is the parlour trick, and there isn’t a more complex metagame to discover once you’re over the initial shock and awe.

That said, Pendulum is good lucking (albeit lacking in theme) and mostly enjoyable to play, albeit it sits in an odd space that is neither beginner or expert level. Its uniqueness goes a long way, however, and there isn’t anything else like it out there as far as I know. Your decision to jump into Pendulum is probably best driven by whether the idea of a real-time eurogame appeals or not. If it sounds good, then it probably is — if not, then you may wish to steer clear.

You can find Pendulum on Amazon.