Tapeworm is a simple game to follow, with lots of twists and turns

From the creator of the Binding of Isaac board game comes Tapeworm. It’s another, smaller tabletop game that fits perfectly between games or as a starter to your evening. Continuing with the art-style of the previous games and board games, there is something cute about this slightly gross concept of a game, where you are essentially creating a giant, sewn together worm.

I dunno, it’s just weird as a concept, but the game itself is a combination of Uno and Dominos, so it’s really easy to play and understand. The game is meant for two to four players – a smaller group- and can be taken with you wherever you go as it’s very small and compact. Each player gets a character card, of which there are two varieties; a more advanced set for those who know the game and a simple, basically the same for everyone, set for those just getting started. 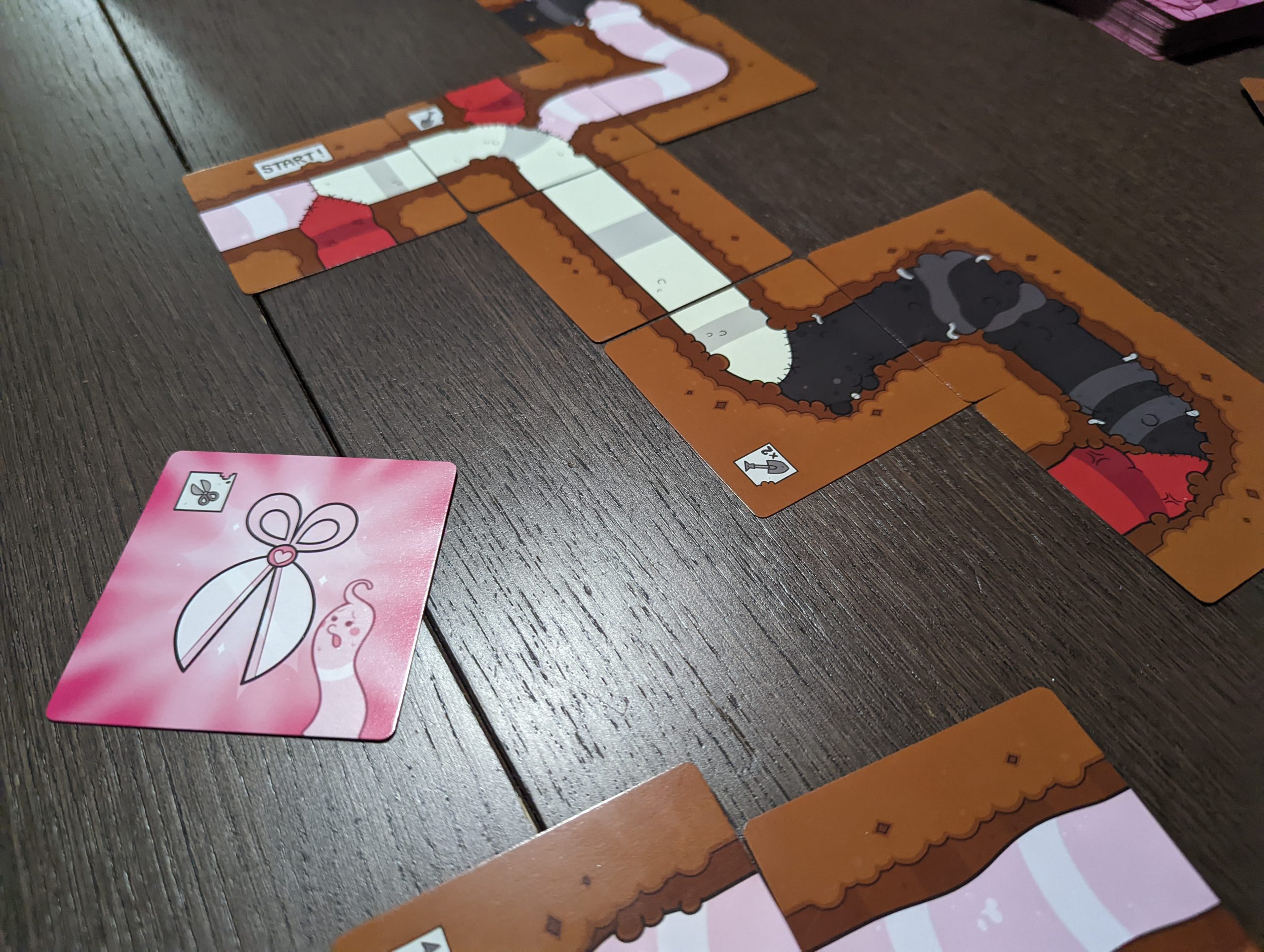 When it comes to the simple cards, each player is basically assigned a color of the worm. This worm is four colors; red, black, pink or white. If you place down a full forward worm tube of your color or a sideways tube, as displayed on your character card, you get the DIG ability. We will get into abilities in a moment, first, let’s talk about how you play the game.

Each player gets five cards in Tapeworm, before a START card that has red, white, and pink starting points for your worm is placed in the middle of the table. Starting with whoever most looks like a worm, before moving clockwise, each player will draw a card and then start building the worm. They can place down as many cards within the same color of worm as they have. This means that, if you want to start with the red worm part and have a straight that’s fully red, a curved bit that’s fully red, then a curved bit that is half red, half white, you can place those down — but once it changes color (in this case to white) your turn is over. If you have no cards to place, you will just draw and skip your turn. 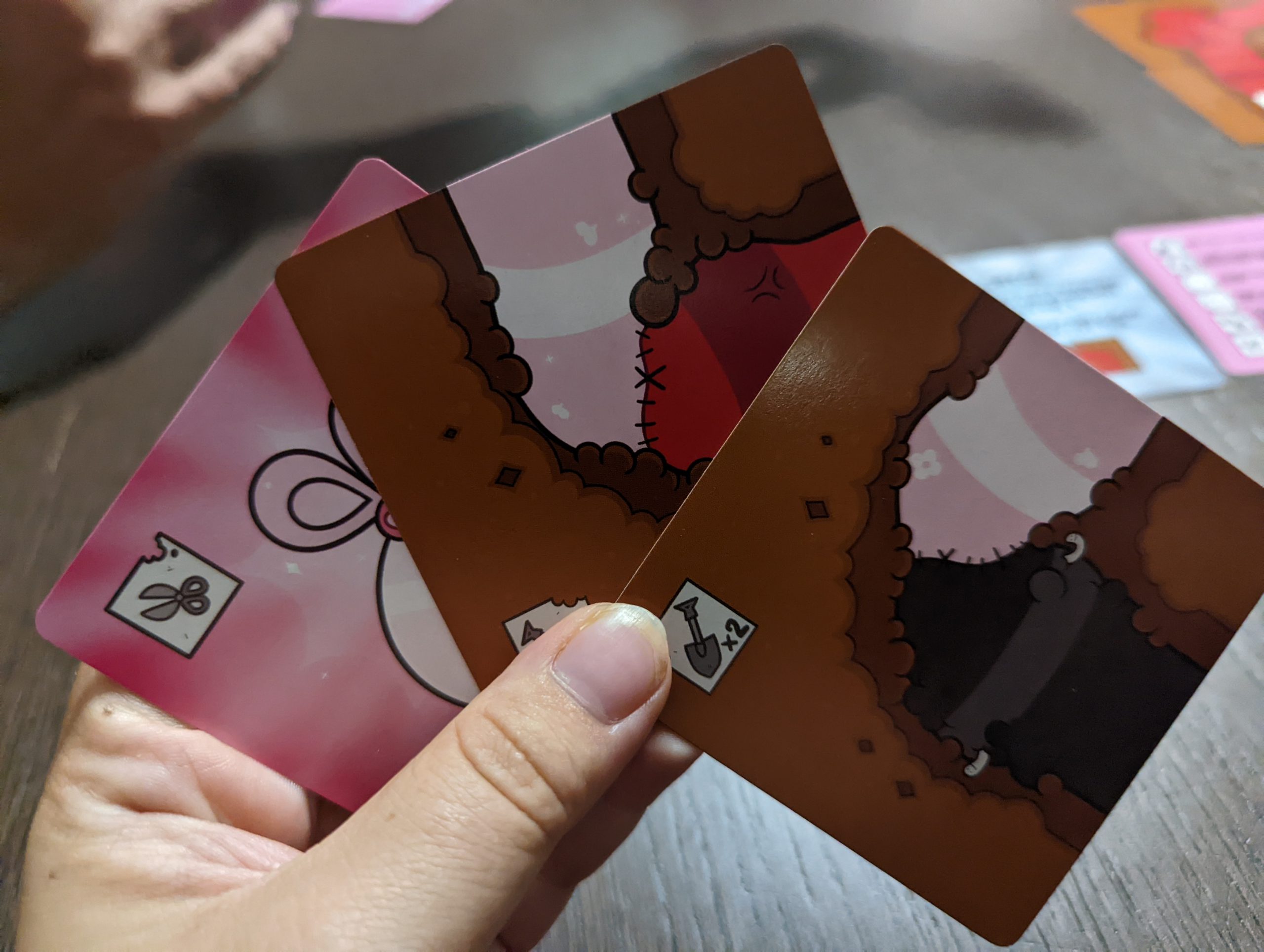 Some cards have different abilities on them, with DIG being the most common. DIG allows you to draw one card from the deck, and then discard a card from your hand (or the one you just drew). Other abilities allow you to look at other people’s hands, look and steal their card, place a card at the top of the draw deck from your hand, force someone to draw a card, and some that allow you to “cut” the worm, basically discarding everything from a specific card onwards.

These different abilities can be used in a lot of different ways to help you get rid of your hand, especially when it comes with cutting the worm! If you use the more advanced player cards, instead of using the DIG ability, each card has a different, powerful ability. They don’t feel that balanced (one player can just see the cards in another player’s hand, while another player can literally de-head end points for the worm). However, these different moves are interesting and add more variety to the game itself. 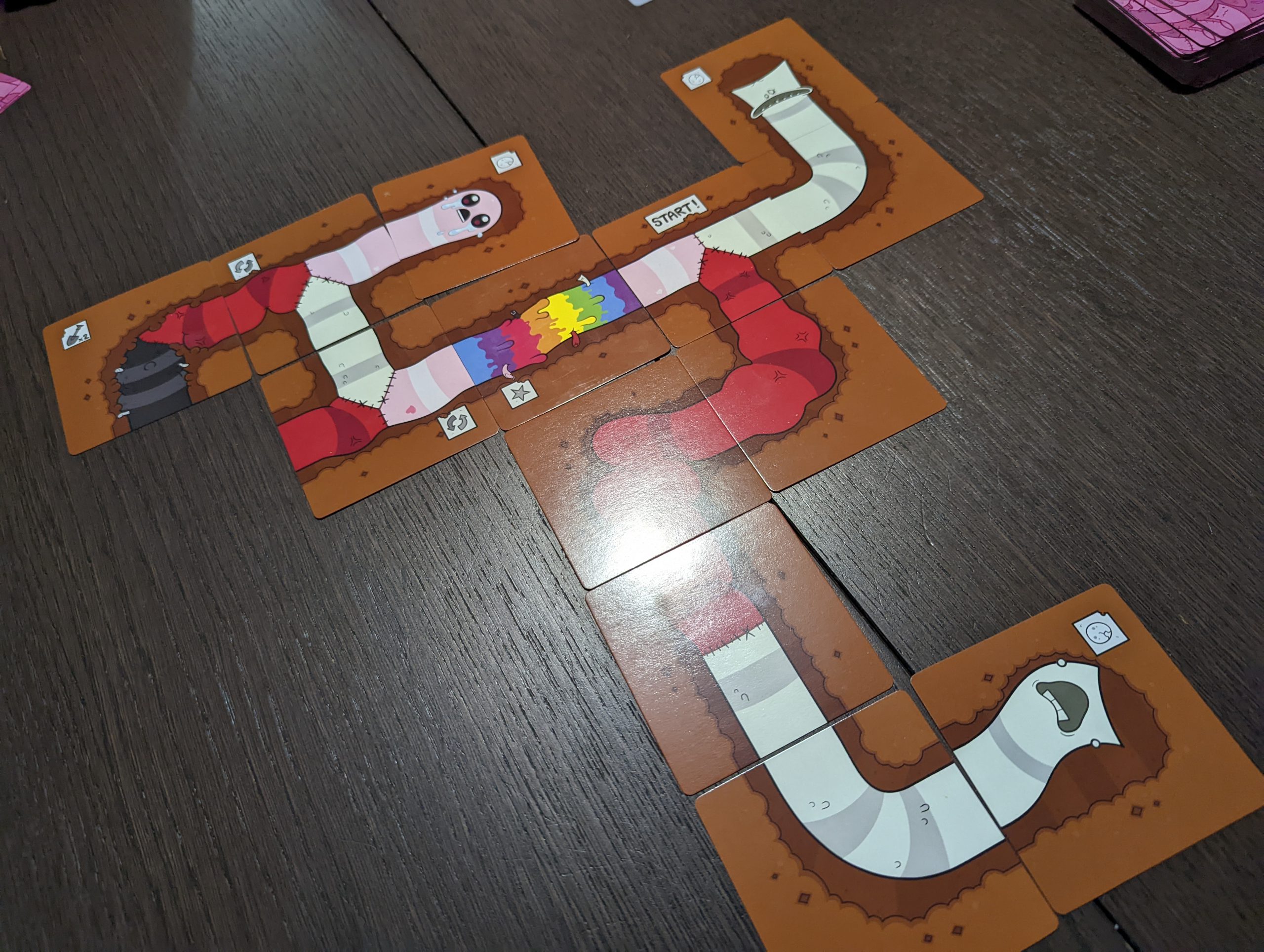 Our tabletop group felt that Tapeworm was a fun and competitive game, as you try quickly build up the worm and get rid of your hand. We do wish that there was more than one starting card or that the starting card was double sided, as there is no black on it and it feels repetitive after a while. The cute heads of the worm are adorable and fun to see, and a few moves, like swapping cards or cutting worms, can really cause drama! It’s a simple to learn, fun game to master.