Binding of Isaac Four Souls is a two to four player game where you and your friends need to face off against enemies and bosses from the video game, defeating them using cards and abilities, to gain souls, coins, powers and more. This game is rated for thirteen year olds and older, and takes thirty to sixty minutes to complete. At the beginning of the game, each player gets a character card at random, which has an ability that can be used throughout the game, a heath number, an attack number, and other information. 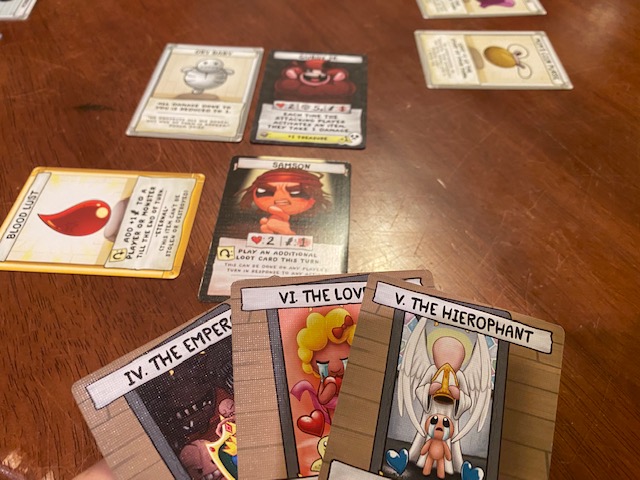 This character will define how you end up playing the game. You will also get three loot cards and a few pennies. Loot cards allow you to do extra attacks as well as help or hinder other players. You can all play as a group, helping each other take on bigger enemies, or start cursing each other so that other players don’t get closer to winning through having the required souls.

In the middle of the table there is a deck of monsters, so when it’s your turn you can attack a monster currently being shown or blindly attack the top of the deck. This is normally done by rolling a die — you then continue attacking the monster until either you or it is dead. If you do die, there is a heavy penalty, where you do lose some of your items and coins, but if you defeat monsters, you are often given more loot cards, a new feature to change the game, and sometimes even a soul. 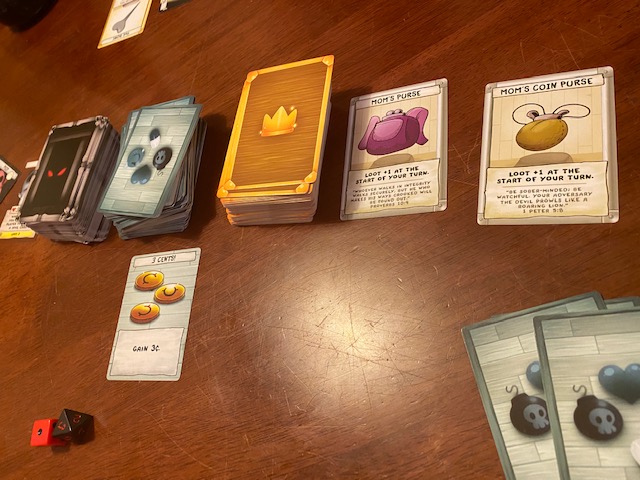 Coins can be saved up and then used, once you have ten of them, to purchase an item from the store — these items are very powerful and can really help you out in the game.

Though this isn’t really like the video game, Binding of Isaac Four Souls is quite different from other games that I’ve played. I really enjoyed fighting bosses and attempting to help other players, just to be betrayed later. There is a lot of strategy when it comes to going through the dungeons and taking on more. On your turn there is a lot that you can do, including a bonus move that you can use by turning your character, however, if you don’t use this move you can then — during another player’s turn — either help or hinder them. Thinking ahead is key in Binding of Isaac Four Souls, so you will need to have a good plan going into it. 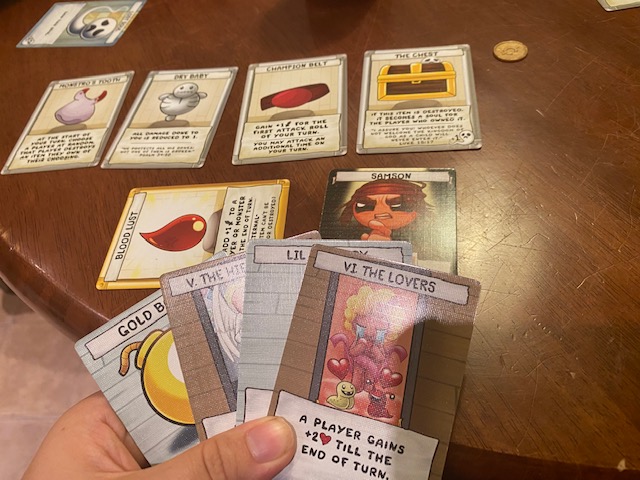 I feel that we all did enjoy playing through this board game — it’s good for players who want a bit of strategy and who aren’t afraid of breaking promises! The art on the cards do match the video game, which is a nice throwback if you are a Binding of Isaac fan yourself.

You can find Binding of Isaac Four Souls on Amazon.