Rocket League showed of the new trailer for its “Starbase Arc” update, and it brings some new updates to the core game including a free arena, as well as a new car for purchase.

Psyonix pushed the trailer live on the 1st December 2016, showing the free update of the intergalactic themed arena, that pays homage to the developer’s mobile based title, ARC Squadron.

The arena is an octagonal space station, orbiting a desert planet, and when a goal is scored, lasers fire. The other surrounding atmosphere elements feature flying ship battles going on in the distance, and planetoids floating by. 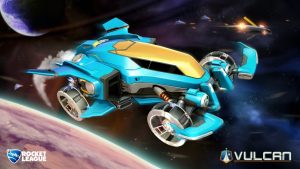 There is also a DLC that allows players access to a new car titled, “Vulcan”, this will be priced at $1.99. If you’re not the trailer watching kind, then you can check out the snazzmobile just over there ->

Another addition to the update is introducing a new mode, “Custom Training Mode” allowing players to design, edit, name, and upload their training sequences for other players.

In addition, the game has been opened up to the Steam Workshop, meaning that players running the Unreal Engine 3 UDK can now create custom levels for the game.

Rocket League is available on PS4, Xbox One, PC, and Mac, and the update will be hitting worldwide on the 7th December 2016.

And it’s free! Check out the trailer below.