Super Intergalactic Gang is a colourful, pixelated shoot-em-up for  fans of arcade classics such as Defender and R-Type. It encourages tense, dramatic gameplay with abilities allowing you to slow down time, or even give a sharp, melee thwak to your foes.

Side-scrolling shooters are a rapidly evolving genre. Each new entry tries to push the mechanics forward in one way; be that mechanics, wackiness, or chaos on screen. What normally seems to happen however is that they try and push out in multiple ways, and rarely do they seem to pull it off – rarely, for me at least, do they hit all the tick boxes. Super Intergalactic Gang however hits most of them, and I found pleasure in playing it.

Pixels, pixels everywhere. That’s what this game is. It’s extremely simple in design, with flat – but, admittedly bright – 2d graphics against simple backgrounds. This visual simplicity however doesn’t detract from the gameplay.

as a member of the Super Intergalactic Gang you have the power to slow down time for a short period of time.

Once you’ve chosen which of the 25 characters you’re going to embark as you get flung out into the field equipped with superhuman fight, a never explained unlimited amount of ammo, and a strange ability to charge your attack to hilarious levels of death and chaos you set out to defend Earth from hordes of peculiar aliens. 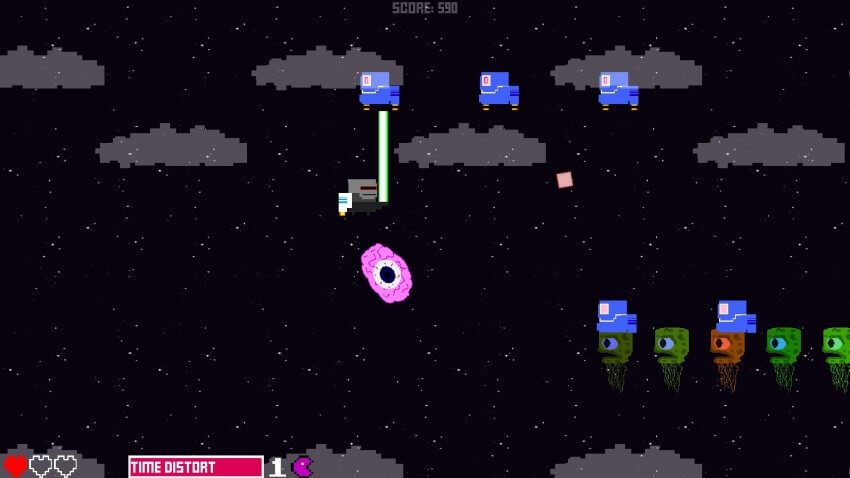 In addition to this, as a member of the Super Intergalactic Gang you have the power to slow down time for a short period of time. This is where it gets interesting – with so many bullets from the enemy flying towards you, dodging them AND the flying enemies all in can be extremely tough. Slow down time, however, and you’ll leave a trail behind you as you move around, or you’ll be able to fire bullets more readily rather than just firing constantly at a specific target. In the least it gives you a respite from enemy attacks, but what I found was most useful was that it gave you the time to turbo charge an attack, carefully navigate the flood of death that is crashing towards you, and deliver swifter justice. For those of you less inclined to dance the dance of death, you can simply use this time-within-time to fire off more steaming hot pellets of death, causing more damage.

The boss fights seem a little bit drawn out, and with 10 of the evil shapes to battle, you’ll find yourself tapping for possibly around about 3 minutes firing bullets at them; by the time you kill them you’ll be so mentally drained that you just don’t even care that they blew up. This is avoidable if you carefully select your power ups, but, you’ll need to beat a boss to get to that point – so make sure you’re carefully picking ones which suit your play style when you get the chance.

The power ups in the game are really interesting, from fists through to lasers, machine guns, and any other form of crazy weaponry, they massively change the damage you’re dealing, and, as a bonus can even change your characters appearance too. 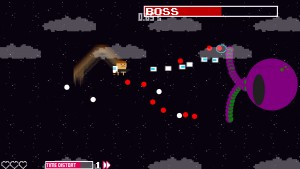 I feel what separates Super Intergalactic Gang from other side-scrolling shooters is that the action is randomly generated. I’m used to having a structured attack that allows me, if I died, to take a different approach, knowing where the enemies were going to be flying in from. The introduction to random events means you can never ever be truly sure of yourself – each level is always a surprise, and that really adds to the replay value.

It’s extremely simple in design, with flat – but, admittedly bright – 2d graphics against simple backgrounds. This visual simplicity however doesn’t detract from the gameplay.

There is an option for co-op, so long as you can drag your space partner to your PC. The music is rather catchy, although it doesn’t sound like your stereotypical 8bit music, or 16bit, instead it sounds like, in parts, a distorted mess, but it’s a distorted mess I can appreciate and find catchy after many minutes of being exposed to it. 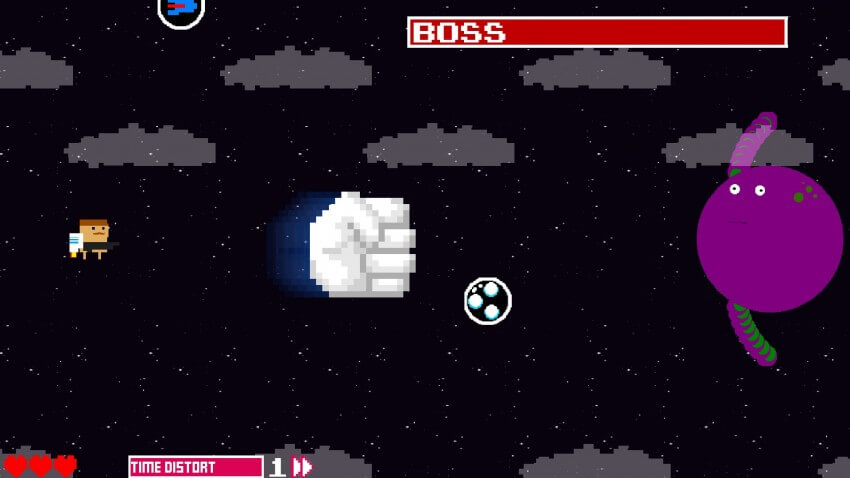 I’d certainly recommend this game if you enjoy the challenge of a good shoot ’em up, but don’t want the seriousness of the classic pioneers of this genre. It’s cute and easy to pick up and fun to play; alone, or with a friend. It’s certainly a game I’ll be coming back to play when I want to sate that appetite of wanting to play something but not wanting to commit real time to something. It’s the personality that the side scrolling space shooter genre has needed.