Review | Stories: The Path of Destinies

Delve into the life of our quirky, silver-tongued, not-so-cunning, furry friend Reynardo the Fox, as he fights for the rebellion against the evil Emperor and his evil doings. Along the way Reynardo will be hit with a string of critical choices with each developing the story in a different direction. While all of the choices ultimately lead you to the same conclusion, how will you – the player – see this through, and what choices will you choose? Will your own good nature shine through, or will evil win the day? 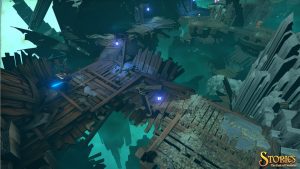 So, a little about the developers to kick things off. The company behind this gem is Speadhead Games, a small studio based out in Montreal, and there’s some experienced developers behind the studio. The team have already released two titles; Tiny Brains, and Arena Cyber Evolution. The latter successfully released on PC, PS3 and PS4, and should most defiantly be checked out when you find you have a spare five minutes. I mentioned there were some experienced hands at the studio, the three developers behind the project have between them worked on Dead Space 3, Army of Two, and Assassin’s Creed 2 & 3. Not a bad batch of titles to have under your belt to showcase your experience, I’m sure you’ll agree. Knowing this I was really itching to get playing Stories: The Path of Destinies, their latest game.

“Most games in this style overdo it with “BHAMS!” and “WHAMS!” but this was subtle.” 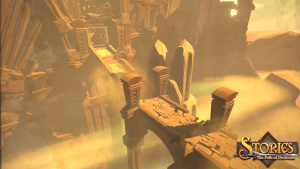 I’ve already eluded to the jist of how the story works in the game with my opening paragraph, that combined with the title of the game should give a fair few hints as well – although I will avoid spoilers for this one, as the story and it’s structure is really one of the stronger points of the game, and I’d hate to ruin the bobbing and weaving of the hero’s place in this wonderful fairy tale setting. I will say that the character evolution throughout the story is brilliant, and the whole game’s IDEA is delivered exceptionally – it really is quite an apt name.
As with a lot of games of late I was prompted with a screen telling me that this game is best played with a controller (I’m on a PC -don’t tell me how to live my life!) I jumped in only armed with my mouse and my keyboard. What a deadly warrior, I’ve become almost as heroic as our own Reynardo. At first I was impressed with how fluid the hand-to-hand combat was, even though I only had a mouse it was very simple, maybe, I guess, but I had only played it for 10 mins so I wasn’t so quick to judge it. 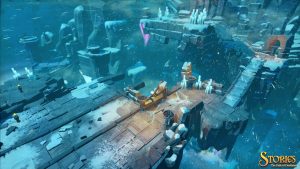 As my character grew and the skill tree grew, I found it a little clunky in all honesty, like I was lagging from enemy to enemy, which also made it messy when more than 3 appeared, but still it was click-and-swing.

Fighting aside, what else was to offer? Well, not much really apart from a compelling story line, there was little to no puzzle aspect, and while customization was basic, it needed more! I loved the idea but it feels like the game is only 10% finished with basic weapons, and a very minimal skill tree.

Stories: The Path of Destinies has the foundation of an epic blockbuster of a game. Looking back though, it feels I’m being very critical on this, but that’s because I want to see it grow into something that can outdo itself and many other games that control the market.

“…the character evolution throughout the story is brilliant, and the whole game’s IDEA is delivered exceptionally” 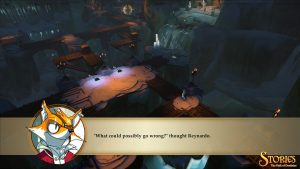 The graphics in Stories: The Path Of Destinies though were a really nice touch, it just complemented the game to a tee with a cartoon effect, which actually did it justice. Most games in this style overdo it with “BHAMS!” and “WHAMS!” but this was subtle. You see me rattle about how good the story is, but how is it told? Well, only in the best way I’ve ever seen, with little cute jokes, and throwing all the punches had me in stitches from the very start which I find very rare from a game. I did spit my tea out a few times so +1.

All in all this is a nice game to play but don’t expect something to keep you yearning for more. While the narrative and the story line had me drawn in, I found that overall it needed more. Some clever puzzles, not just secrets that could be found with ease or be able to spec out your tree with very basic upgrade, which you see in every RPG, on that note don’t be put off see for yourself the game of the century could just be around the corner.