Imagine you put several tins of paint, some evil advanced AI and the hottest mix tape of the century all into a blender and turn that up to 11 while the lid is off. This is what Bezier screamed to me as soon as I loaded the game up, and it continued to scream in my face for the remainder of my time playing.

From the moment I got to the menu screen of Bezier, I was blown away. Really. The graphics and music just had me glued to the screen. I was like some junkie, I needed more and I needed it now; so I jumped straight into the story, or from what I could tell was the story since the narrative of the game wasn’t exactly clear, but heck who cares! Pretty colours!

So story mode – From what I could gather you’re in some computer and this advanced AI called Magus Domus, has gotten out of control and you must end it. Simple right? Good, because this game is more so based on the graphics and sound track, which is awesome considering this game was made by a single producer. While every game mode is very similar (shooting, explosions and dodging) in a nut shell you destroy annoying bright enemies to get close to the shields before your judgement runs out (time limit to me and you). While the story is displayed in white text at the start of every level, I found it interesting but more of a distraction, never the less it was a good read.

“The graphics are mesmerizing, the sound track is entrancing, and the game play, while repetitive is strangely addictive” 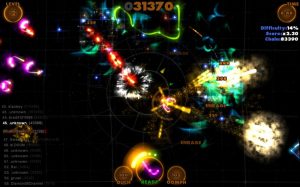 Endurance mode. Now what arcade game in its own right won’t have an endurance mode? This as the name suggests is fighting as many waves of enemies as you can until you die. Nothing much to add to this but one cool thing I did find was at the beginning of every wave you had a little message pop up and a little certain message popped up which had me laughing for a bit; let’s not spoil the fun go play it and find out. Last but not least Daily play. Nothing great apart from the awesome facts you get to read which display what happened on the day which is quite awesome to read, like your own personal fact displayer. Finally you can impress those friends of yours. 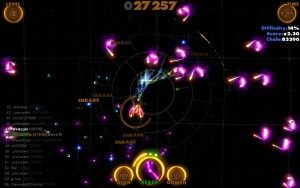 Now down to the game play. Within Bezier, you can left click the mouse and aim or right click to auto aim, which is a God send when you have so many enemies flying around you; only down side is it has a cool down more you use it the slower it gets, so remember to let it charge!

Ouch? Omph? No I haven’t just fallen down the stairs, these are 2 key parts to playing Bezier; your ouch bar is your health and omph bar is your multiplier. Restoring your ouch bar is easy all you do is collect these little gems that fall from enemies you kill, which at first I found bit too simple and easy -boy was I wrong, and omph bar again, kill, kill, kill, and collect those pesky gems!

“…this game is more so based on the graphics and sound track, which is awesome considering this game was made by a single producer.” 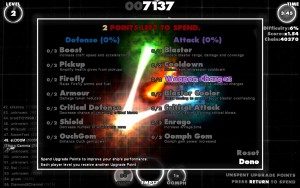 Another cool feature is the upgrade screen where you can level up and spend your hard earned XP; this carry’s on through all the different game modes and gives you some pretty awesome ability’s. Such abilities are increased speed, damage, and resistance to name a few, and while in the game you can get pickups again I shall only name one – Guardian – This swings a little ball of death around your ship. Now the rest is up to you to find no point in telling you everything!

So overall I feel Bezier, for what it is, fits the agenda perfectly. From what I know, one guy had a dream and delivered on it after spending 8 years and for that alone I salute you Philip Bak! The graphics are mesmerizing, the sound track is entrancing, and the game play, while repetitive is strangely addictive (happens a lot in these games) it’s easy to pick up and play but unfortunately not a repayable game in my eyes but that’s me. I’m just a busy fool.