“Oh look another endless turret game” I think to myself as I jump into the first level. I wonder how many times I can kill the one, same enemy and not get bored. I put the game on just after I had put my dinner into the oven, with a few minutes to spare. My expectations were low, I was expecting a 30 minute session, maximum. 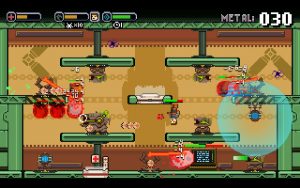 We have a saying in England, everyone knows a Dave, and the developer clearly believes the same. Enter Dave the astronaut, and his alter egos,  Dave the moaner and Dave the underachiever. Yes, Dave goes by a lot of names.

Now we know our protagonist. What is his role, and what is he doing? Well, as it happens Dave has recently enlisted into a space program, and even more recently he’s been left as the last line of defense for his new ship – with the sole responsibility of keeping the aliens at bay. As with any tower defence game it starts slow – as a matter of fact, I bullied my way through the first few levels by spamming the basic laser turrets, chuckling to myself as they made sizzled steaks of the squishy blobs. 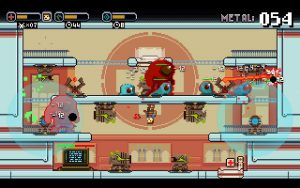 That said, the difficulty soon ramped up, as a matter of fact as soon as a voiced my thoughts it did so. The You Lose screens came thick and fast from that point, waves and waves of the aliens, beasties of all shapes and sizes. My discomfort was clearly shared with young David, who humourously spouts lines along the way, “I didn’t sign up for this” he exclaims as a laser shot narrowly kills an alien in time.

“…it draws you in by making you at ease, while you have your feet up sipping tea, your spaceship is slowly getting overrun by clams, or big red giants.”

Now, after this initial spate of attempts I started getting more interested in the game. The basics – building choke points, scrapping turrets, trying to funnel enemies were all becoming a lot more clear. Each time I failed I had learnt a little more, adapted my game plan, achieved a little bit more progress. This is how my food came to be burnt, I didn’t realise it, but I’d been hitting retry following a failure so much so I’d lost track of time.

The differences from the normal tower defense formula had also fully reared their head.

Now to the game itself. Simple concept with the turrets, you have allocated areas you can build them, and you build them with your spending “Scrap” to build and upgrade said turrets. Scrap is obtained through killing aliens, scrap’ing what you already have or playing the mini game which you will find short of hand very soon. One cool feature I liked was the anti-gravity aspect where you can float up to the ceilings and fall to the ground at the touch of a button, it really does add somewhat of a charm to it. Now back to the pesky aliens. Their preferred entrance is from rifts, to which they make their way to the computer in each area to destroy it. You have a little blaster to shoot at them, but that does get hot and needs to cooldown, so this isn’t a very reliable weapon, but it never hurts to blast away! You do get some pretty basic upgrades for it though.

“I bullied my way through the first few levels by spamming the basic laser turrets, chuckling to myself as they made sizzled steaks of the squishy blobs.”

Now, the story is, I would say a bit easy, come on over challenge mode because once again, I opened my big mouth and once I jumped into this mode, I couldn’t complete even one for a while. Unless I was just being absent minded, I don’t know but this was a challenge alright and one I was going to overcome! That’s the beauty of this game, it draws you in by making you at ease, while you have your feet up sipping tea, your spaceship is slowly getting overrun by clams, or big red giants. Each challenge seems pretty basic. Destroy one type of enemy while your core is at half HP, or fight multiple enemies on every arena. However, to no surprise we have our textbook game mode of endless waves! What would a turret game be without that?

So all in all not a bad game, as I said I found it bit easy at places even mind numbing, but fight through these spots and the game just hikes in difficulty, then drops. Thankfully they added other game modes, Endless mode is great for testing your turret skills, and challenges really do put you on the edge with never a moment you can truly relax. No rest for the wicked, Dave.