It’s no lie that gaming consoles are a huge part of modern society, and it’s also no lie that the progression of them has been nothing more than impressive, in fact, The Timeline of Gaming Consoles is really rather impressive, whether that be from graphical improvements from games like “Turok” to the new “Rise of the Tomb Raider”, or whether it be from the designs of the consoles, getting thinner and more powerful, or whether it’s just the pure amount of storage available to store your games and apps on. Consoles have become a part of us as much as our phones have become a part of us.

Welcome to The Timeline of Gaming Consoles, now, I haven’t owned any consoles previous to the Sega Mega Drive (1988) but anything after that I’ve owned the majority of the major consoles. I will be however looking at all of the consoles that have been released. So let’s get started.

Ralph H. Baer was the first gentleman to bring us controllable entertainment in 1967 with his, “Brown Box” it brought with it, six games in the form of a, surprise surprise, brown wooden box with switches and two other brown wooden boxes with dials. Bill Harrison and Baer developed, Ping Pong, Tennis, Handball, Volleyball, Chase Games, and a Light-gun game for the console.

During 1972, Magnavox licensed the Brown Box’s innovative technology, which birthed the first official home video game console, the Magnavox Oddessy. There were also a bunch of new games, all pretty much light-gun games, or sports. Physical scorecards, dice, and more physical items were included, which kept the board game feeling alive, but that was just because they hadn’t quite mastered the art of scoreboards in games. The Oddessy did also start to introduce more genres, such as Interplanetary Voyage, and Haunted House, this made a great change from the simple sporty style video games.

1973 saw Nolan Bushnel’s Atari’s PONG machine becoming so popular that they decided to make the most of the fame and market the game as a home console two years later in 1975. During 1975, Magnavox had decided to release two updated versions of their Oddessy console, calling them the Oddessy 100 and the Oddessy 200.

Magnavox, during the years of 1976 and 1977 has decided to release console after console, with changes being ever so slight to the graphics, in-game scoring, and the way the controllers worked. It wasn’t just Magnavox making changes because Atari had been busy creating new consoles, the Atari 2600 is one, which brought us Space Invaders! There were also other new companies that had decided to get on the same boat of gaming. Fairchild, RCA, Coleco, and General Home Products were all creating their own consoles to compete. Coleco however was the only main winner out of that list because they actually advanced games by introducing colour and difficulty levels, all with their Telstar console.

A year before this year, the company we all know and love, Nintendo, had entered the console market bringing various consoles from 1977 to 1979. They were however only available in Japan, and they were called the Colour TV Game Series, and it pretty much went down the same road as Atari with pong style games. People must have really loved Pong back then!

Other competitors had joined the console creation craze and most of them did indeed fail. Doing hardcore research, I found that competitors such as the Bally Astrocade in 1977 had failed, despite being a competitor for graphical quality, they ended up leaving the market in 1983. Mattel with their Intellivision Console had come to the public in1979. It was a tough market, and all of the companies struggled to compete with one console; The Atari 2600,  primarily due to it’s graphical superiority and the game choices.

The years that defined gaming had approached and no one knew it. Not at the time anyway. Companies had started to get brave and evolved their consoles by starting to experiment with different ways of playing. Pong must have been getting boring. 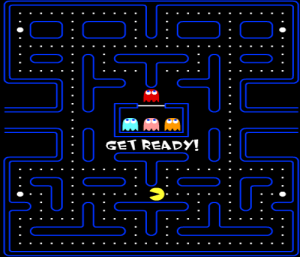 Pacman showed his face in 1980 and was an arcade classic, while Mario climbed up the construction work, back down to the ground, then back up from the pipes in 1983, followed by Link breaking vases in 1986. These were also the years that consoles started focusing on making cartridges with games coded into them rather than building the games into the actual console, which meant good things for the amount of games available, because by creating cartridges with their own games in them, the console could become more powerful without having it’s memory used up by all the games built in. We can’t forget the Gameboy in 1989 which allowed people to game on the go!

Oh, Sega had shown their face during these years with their Sega SG-1000 and ended up ruling the gaming world alongside Nintendo throughout the 80’s. Thanks to the SG-1000 Sega built upon its success and released the Sega Master System. Whilst that was happening, Nintendo had released their Nintendo Entertainment System (NES) in1983 and it went on to be the best selling console of the generation.

As expected there were several start up companies that had tried to get their foot in the door and share the limelight with their own consoles, but the competition from Sega and Nintendo was just too high that they couldn’t gain any momentum and got lost into the void.

That’s the end of Part 1, travelling from the dawn of consoles to the Golden age. Part 2 wil look at what consoles came to light in the early 90’s all the way to today. I hope you enjoyed this editorial and make sure you head over to our Twitter or Facebook page and drop us a follow!