The open road. Eastern Europe. Just you and your Uncle. All with real car simulation and glorious low-poly graphics.

So, when me and Dann went to the PC Gamer weekender in March we bumped into the Excalibur games team who had some pretty neat games on show. One of those games was Jalopy (originally named Hac), a game which Dann knew about before we got there, in so much as he was planning to head over to play the game, and wanted to meet the developer. Unlike Dann, I knew nothing of the game, however I was impressed with the good things I heard about it before I got down to sitting down, and sinking my teeth, into it.

So, let’s start with a brief overview of what that game is about. The game is set in June 1990, following the collapse of the Berlin wall – and your uncle has been rewarded with a Lakia 601 deluxe after his years of service to the state. He plans to use this new freedom to travel back to his homeland with you, his nephew.

The game starts with you being awoken by your alarm clock, your uncle already awake and waiting for you. It is here that you get a chance to check out his crazy jacket that looks like some gnarly 80’s wallpaper – nearly as important to the game as the car. He walks you out to the Lakia that he has acquired, but it clearly needs some work as — in its current form — it stands on bricks with no engine to speak of and a door missing. But, that’s ok as you seem to have super-strength as you manage to carry all the components to assemble inside your car without a sweat broken. That’s actually a neat thing about this game, each of these parts are separate systems within the game, and car maintenance is key to you being able to get around, without it you’re sure to fail!

There’s a fair few things you need to consider; the running of the engine, so how the fuel/oil is mixed and how much fuel you actually have in your tank and, well… pretty much just like normal car maintenance. There are also opportunities to upgrade the various components of your car for more powerful engines, bigger fuel tanks, better tyres designed for multiple terrain and so on so forth. Uncle explains these things to you at the start of the game, as you assemble your Laika – in a way serving as a tutorial.

Let’s talk about the art style of this game, shall we? The game runs on the Unity engine and uses a low-polygon style of graphics. The dev’s history working on racing titles at Codemasters might make the low-poly art style seem like an odd choice at first however, this gives the game a nice smooth landscape with subtle colour and a ton of charm that makes it a delight on the eyes. The art style also serves as stark contrast to its closest relatives – truck simulators. While Truck simulators have you covering great, set, distances to an impressive scale, attempts at realistic graphics normally undermine the real point of the game… the journey. With Jalopy being about the journey, but also the maintenance of your car, it’s better that the game takes on a style than trying to gun for complete, high-fidelity, detail.

“…the game introduced me to how it handled currency – something not normally physical in the earlier mentioned truck sims.”

After I had finished carefully putting everything into my car I was finally asked to step into the driver’s seat of the metal baby I’d just brought to life. Here is where you are introduced to the instructions booklet for your car, this keeps tabs on everything you have installed here and what configuration it is in – it also allows gives you a different way to see what is in the boot of your little Lakia. A map is also given to you; this allows you to plot a route to your destination whilst also making notes of what pit-stops are along the way on your journey. You know, just in case you need more fuel, oil or repair kits. 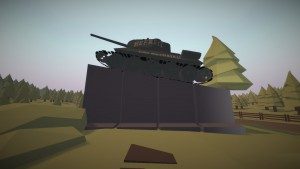 So, that’s all the tutorial out the way and now comes the actual driving of your little green box, put the keys in and away you go. Now, much like normal car in reality, you need to make sure that you also use the instruments given to you on the dashboard. You have headlights, hazard lights, windscreen wipers, rear heater and a handbrake, so a normal car, eh?

Once I had selected the route I wanted to take – from the three on offer – I pulled out onto the road, drove along and begun my journey. I had picked the route with rainy weather (which I don’t remember being in the previous version of the demo before but is a nice welcome) as opposed to the short, muddier route, or the vastly longer but clear route. Regardless of the route you take, the game will procedurally generate it as you drive along. Driving along will actually put together pieces of road it selects for you – much like the way you could place down pieces of a child’s train set track, it could place down familiar areas for you or off-road chunks. Although this is something that the AI did not enjoy, the dev has managed to patch this up.

As time passes on in game and the further distance you drive, it becomes imperative you keep your car well maintained – this is due to roads becoming less looked after once you progress beyond the Germanic states and into the outer regions of the map. This does give you more of an ownership over your Lakia as it’s not much good to you when it’s broken down in the middle of nowhere, so keeping a spare tyre and jack/tyre iron is likely a good idea.

“With Jalopy being about the journey, but also the maintenance of your car, it’s better that the game takes on a style than trying to gun for complete, high-fidelity, detail.”

After a short time, I arrived in a small town which was just past the Czechoslovakia border and I was told to find a motel so me and my uncle could stay the night. Upon finding one we walked in and up to the reception, this is where the game introduced me to how it handled currency – something not normally physical in the earlier mentioned truck sims. This was a wallet that you carried around with you in the glovebox of your car, with the cash actually poking its head out of the top, a simple number telling you your balance. This is a nice feature, as you don’t have any menus to check this in, it’s all done visually within the game itself. Another thing to mention is the game doesn’t have any specific types of currency, it’s just a number. This was so the player needn’t worry about having to change the currency over when crossing the border into another country. He did mention adding it in at some point in talking to him but I am unsure if this is to still go ahead as it feels like it could become messy to keep track of what currency you have.

Pressing on, I paid for a room and this is where the current build comes to an end. You climb into the rented bed and the game fades to black and takes you back to the main menu.

Now, when me and Dann played this at the PC Gamer weekender we actually had a few problems with AI just crashing into us on the road and in his case, causing a pile-up on the road no longer allowing him to continue on his journey. This introduced a fine system which is very similar to of Euro Truck Simulator – these are shown as tickets that will slap themselves on your windscreen. I have not seen anywhere to pay for these yet, or if is something that automatically subtracts from your current balance.

It’s nice to see the dev ironing out these bugs as this was not a problem I encountered playing the early access version on Steam. I did however encounter some more bugs in this demo though; I actually saw the suspension pop out from the side of the vehicle when I was doing some maintenance and it was stuck like this. The car still performed correctly and drove like it should, just a graphical glitch maybe? And another minor thing was the headlights not turning off when I flicked the switch for them in the driver’s seat. Other than these two things, nothing else interfered with my time on this updated version of the PC Gamer demo.