Inkle are back, and with them, in a wonderfully, textually wrapped package, they have brought along Steve Jackson’s Sorcery! Part 4.

Unsure what this is? Steve Jackson’s Sorcery! Is a video game series that focuses on replicating the feel of playing a role playing tabletop board game, by showing a players eye view as if you were sat at a table looking down on the game. The character piece is animated only by sliding along a path drawn by the player. You’ll face a lot of story snippets that explain; in awe-inspiring detail, what the scene entails, and then in moments of battle, a side on profile with a unique battle system comes into play for the most action packed area of the game.

Sorcery! Part 1 and 2 came out in February 2016. and 3 came out in April of the same year – Part 4 is the latest addition to the series and allows you to start a fresh new story, or to carry over your previous choices from the last three parts. If you haven’t played those part, I suggest you do! I did a review on them, and you can visit my review on parts 1 and 2 here, and part 3 here. 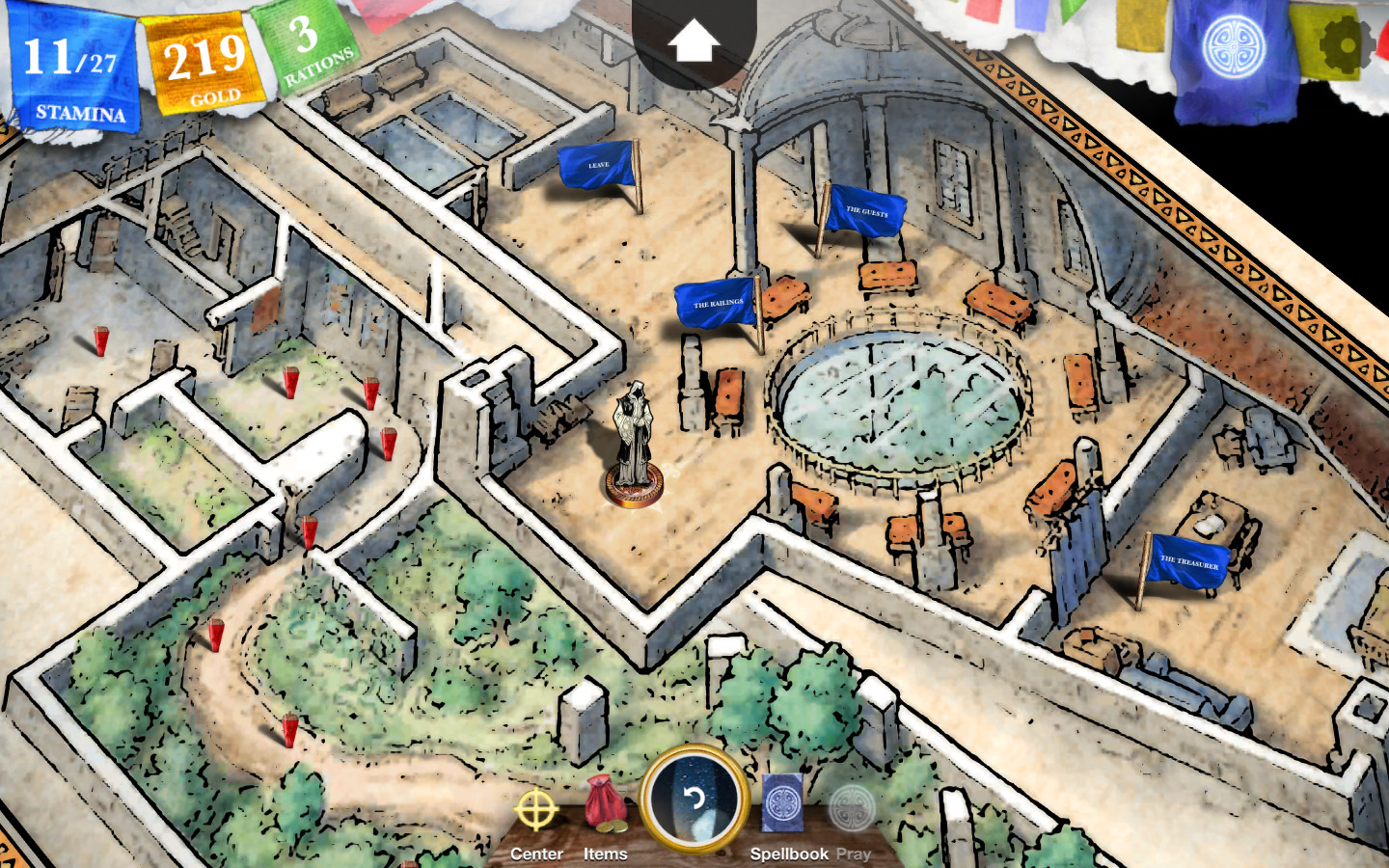 Part 4 brings the iconic recurring title screen back, the introduction to the game told through text that places itself atop the fluffy clouds behind them. Then you choose your hero, or heroine and set off on your adventure, an adventure where you’ll travel the lands on a quest to break into the heavily guarded, Citadel of Mampang. Within those walls you are set to find the Archmage, the one who has stolen the Crown of Kings in order to bring forth destruction unto the Old World.

Once inside the castle walls, you find the clues as to where the treasure could be, and you’ll realize that the guards are aware that you’re planning to enter, so you’ll need to sneak around the area using your wits, and your spells. The gameplay remains the same style as the previous three parts. Your character, a piece of a board game, moving along a drawn out route by the player until they reach the flag, which progresses the story once reached.

The story told in paper cutouts, the choices available shown beneath, once chosen they stitch to the last snippet. Your choices affect how the game plays out heavily. Although it feels like for the first several choices you’re following a set path, eventually being given a choice that doesn’t result in falling to your death. Outside the Citadel you’re able to rewind back to previous areas of your choice and change how the story plays out, however within the walls of Mampang, every choice is final. 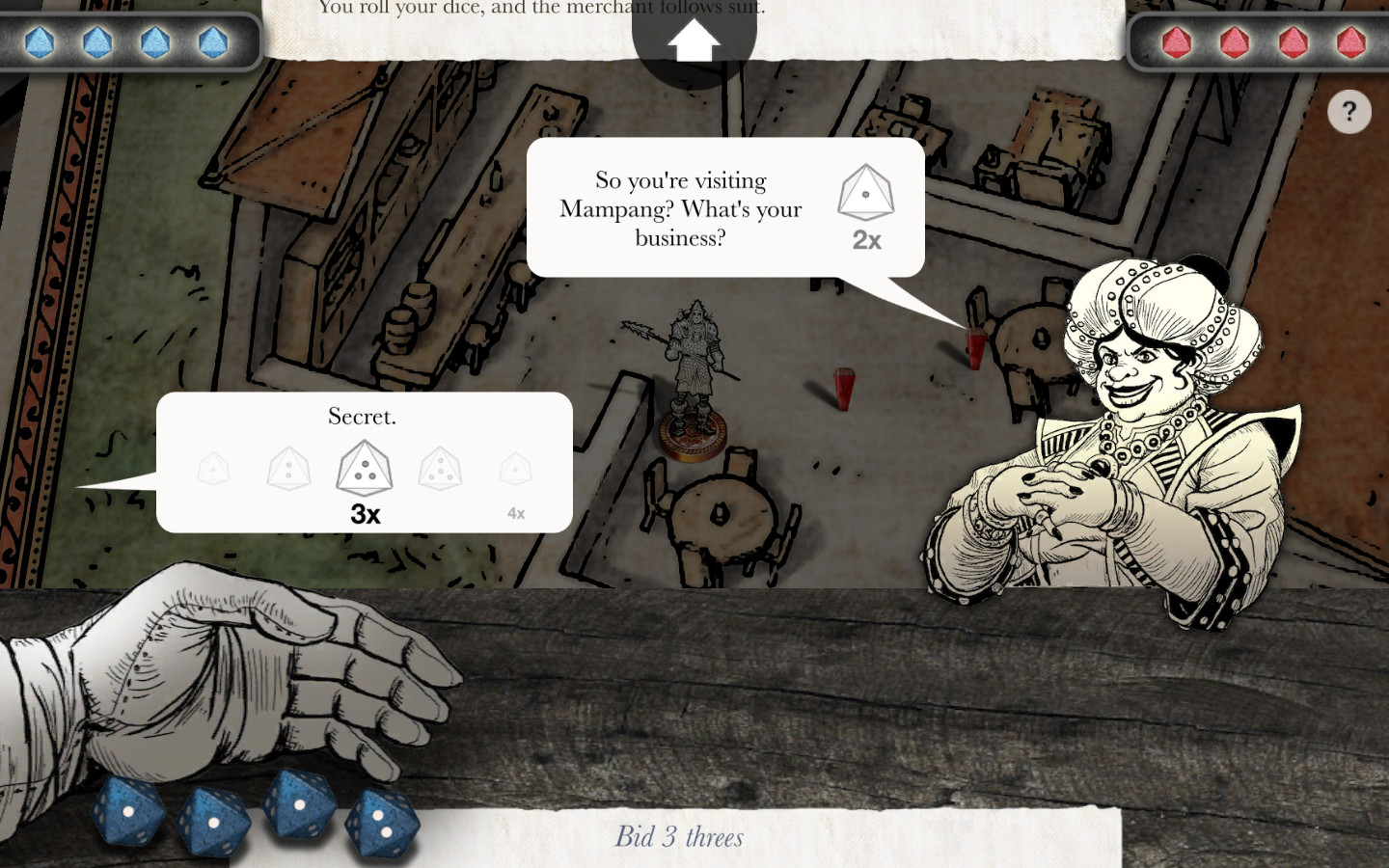 Combat remains the same also, being a tactical system that comes with three attack stances and a defence. Stances that must be chosen with care by reading the dramatic action packed text that details the impact of your attacks and the state of the enemy and their body language as they prepare for the next attack. The whole layout is different to the rest of the game as the perspective changes to side profiles battling it out. As opposed to the games overall top-down view. A successful battle is one where you have used the least stamina.

The types of spells available are made up from three letters. For example, FAL, or POP. You have a spell book handy in your inventory, but personally I kept forgetting about that, so when it came to spell casting, I would just go through all of the letters available and read what the spell would do before casting it. Sure, this was a long way of finding the right spell, but the spell casting system is so interactive that I would happily just create random words and see what they would cast. Something about sitting amongst the stars poking at letters to create a spell appeals to me.

As it turns out, in Steve Jackson Sorcery! Part 4, you find yourself becoming cursed by a man who calls said curse, ZEd. The d is lowercase. Later in the game, I made the choice to run past some guards rather than wait, this led to my capture, which led to an attempted escape from the chopping block, which led to my death. But then rather than call this, “game over” my character was still alive. The option to cast a spell was given, and the ZEd spell was allowed to be cast. This is where the game defies death as your character becomes ripped apart, torn through time, and lands back to the location where you met the cursed man. Your character remembers everything in detail, and you can continue on your way to find the Crown of Kings. 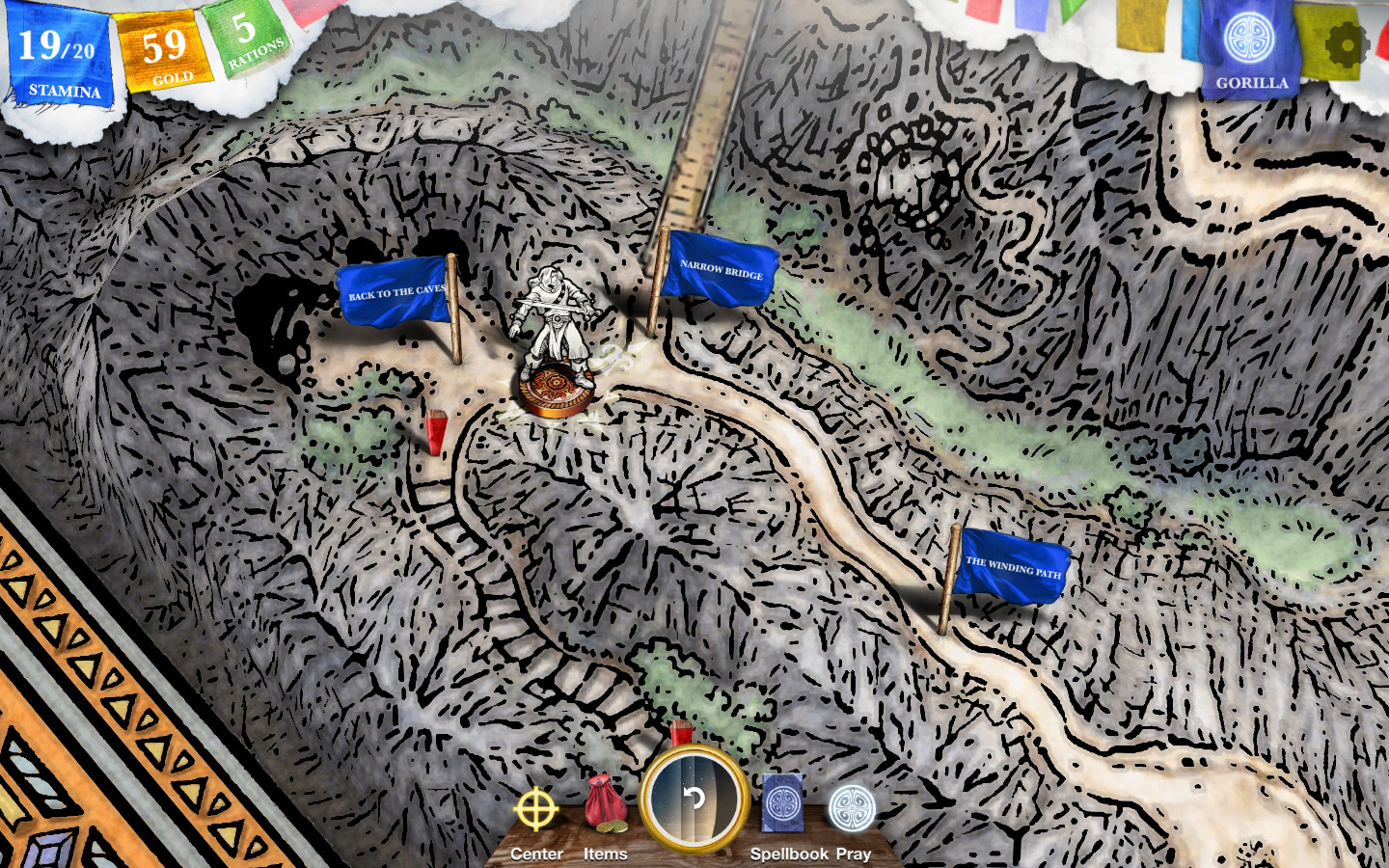 What constantly amazes me about these games is how seamless the story ties up with the choices you make. I ended up getting some saucy looks from a chef. However despite this when out in the wilderness there seems to be many moments where you’ll need to rewind, because you choose to go down a path that is impossible to pass, no matter what you try. There won’t be any spells with the right items needed, or there just won’t be any spells that can help. Either that, or the creature you face will be too strong for you, no matter how you fight, leaving you with no choice but to rewind and head down the other path after dying far too much.

There are also a few camera shots that get a bit jittery and rotate un-naturally, but despite these, this game is pretty solid. The story is fantastically well written, the way it all links up is incredible, the graphics are consistent from the previous games, and keep the game iconic and pays homage to the book version of the game book.

Certainly give this game a look, just this part as a standalone is fantastic, but also be sure to check out the other games and broaden your Sorcery! backstory.

My screenshot system broke for no reason…so the images above are taken from the Steam Store page.