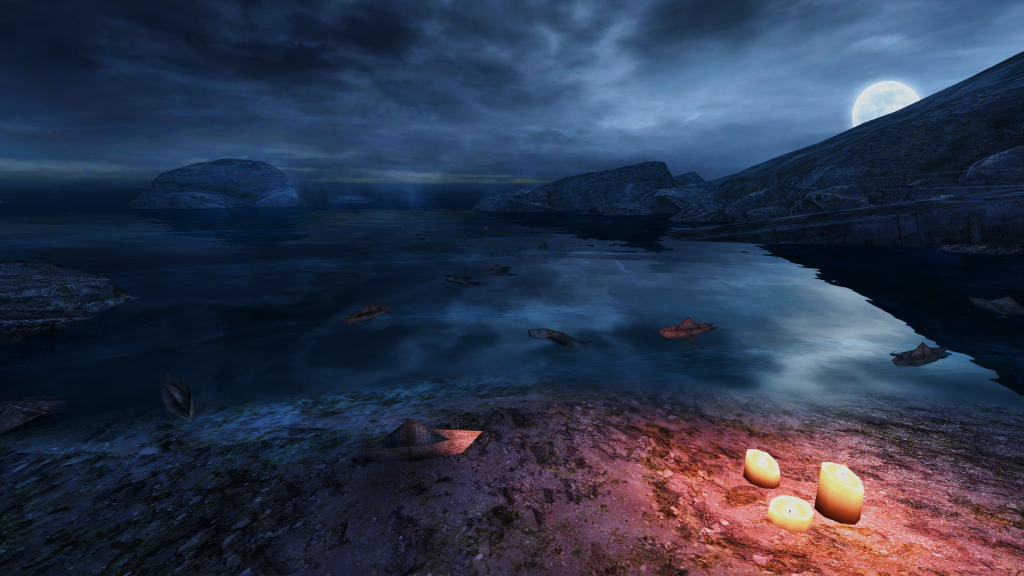 From the first moment I pressed play in Variable State’s Virginia it felt like I was a player in a television show; cleverly framed moments in time, cutting away to maintain momentum; long journeys snipped down to the eventful, relevant moments. Each of its little chapters and scenes carefully laid out, strung together by important narrative discoveries; a file, a locket, a diary. These moments pushing the story forward towards its eventual end. 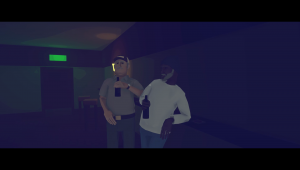 Virginia, for those unaware, is a -as the developer’s themselves describe it- interactive drama game. It takes heavy influence from the wonderful Thirty Flights of Loving, especially visible in its silent characters, and video and written media style cutting between moments in time. If Dear Esther was players navigating a painting laced with poetry, then Virginia is a muted detective show, with David Lynch as a guest scriptwriter, and director.

As a matter of fact, it’s one of the best TV shows I’ve ever seen, and definitely the best one I’ve ever played. It toys with the truth of the situation, and then much like the shows listed as its inspirations Twin Peaks, X-Files, it escalates a big situation around it, completely dwarfing the issue at hand, so much so that the resolution sometimes answers a question that you never thought you would have asked. That’s vague, I know, but much like games in the first-person exploration genre, a lot of the story moments are critical unveils, and even hinting at them too heavily could ruin the experience. 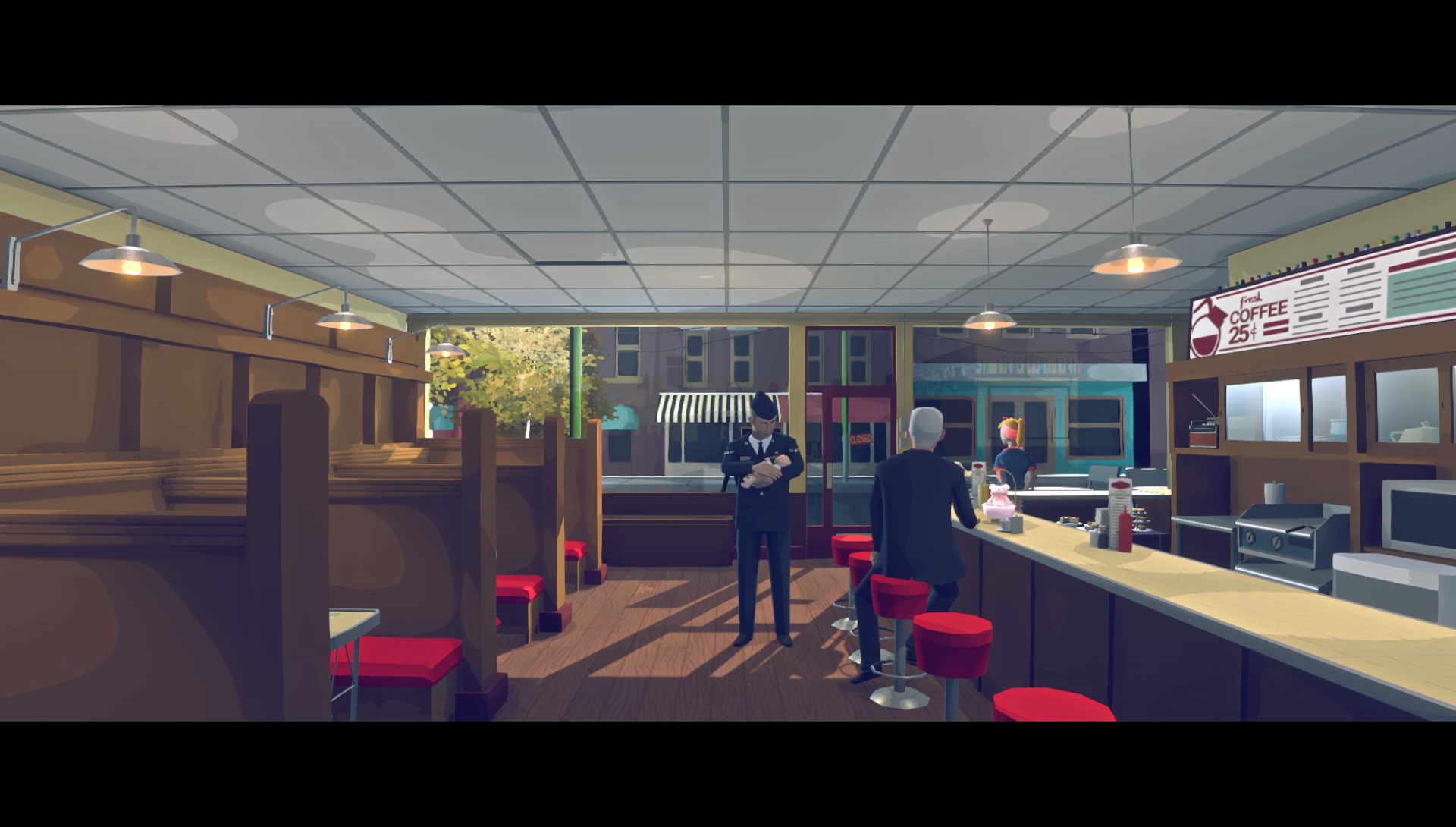 Virginia managed to completely surprise me with its story, as anyone who reads the website will know, my impressions from the demo, were of a spiralling, missing child story that would ultimately encompass the entire town, I strung together hints of spirituality yet also aliens, and I cast doubts on the father of the missing boy. Ultimately all of these leads were piffle, as I think many of us would have hoped, with the game’s narrative expanding in several different directions; and the choice for the title, Virginia, ultimately becoming an obvious choice over Kingdom, the town where a large portion of the game takes place, before the game hits the mid-point. 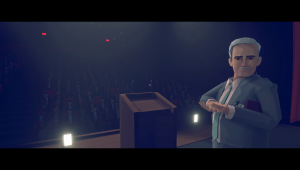 expecting a clean-cut detective investigation, carefully layered with foreshadowed twists then you won’t find that here. Games may have their traditional ways of telling a story, a do other forms of media; but just like Mitchell’s number9dream, or Lynch’s Lost Highway, Virginia’s story will be best remembered because of it’s structure, rather than the messages it conveys.

Kingdom, and Quantico, both look amazing the game’s clever art style, a polygon heavy system with amazing levels of lighting and shading details over all areas of the game. While the game is certainly urging you to move forward, in the few small wandering sections of the game where you can scrounge up collectables, it’s hard not to reach for the screenshot button when you’ve found the right place to stand. That said, a lot of the playtime is spent in an observational role, with Anne’s body locked in place, but you having full control over moving her head. This is actually done on a realistic axis -as in you can’t turn 180 on the spot- which actually feels both personal and unique. 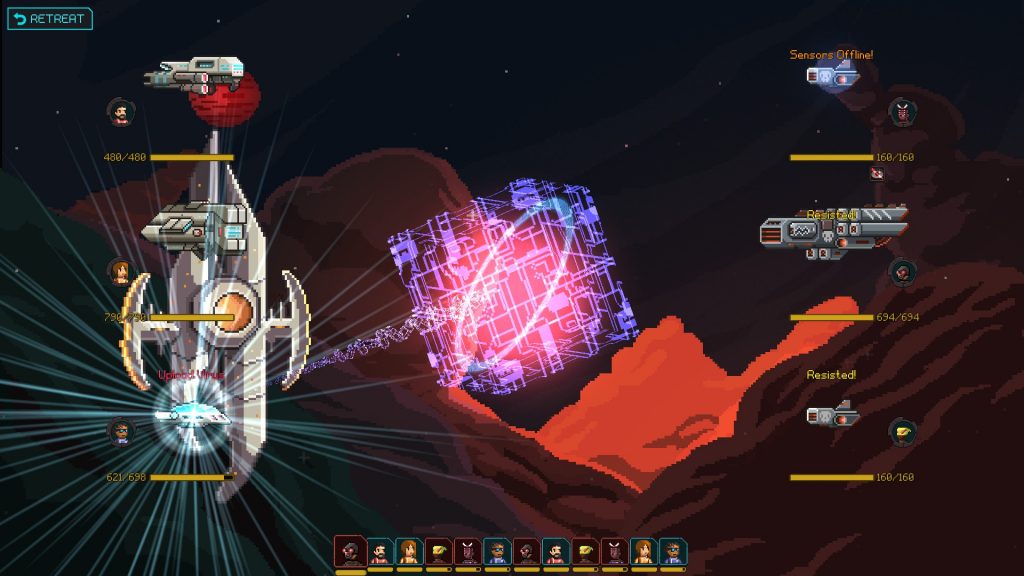 Most of these little scenes are moved on through you interacting with a relevant object; these are easy to identify as the cursor changes when you mouse/look over them. There’s only ever one item that actually identifies the scene, however there are regularly more things to interact with -the previously mentioned collectables, and some items that will be stashed by the protagonist. Not only is the scene moved by this, but also the game’s music – an absolutely amazing performance from the City of Prague Philharmonic Orchestra full of extremely suspenseful and scene setting music, that completely nails whichever mood dominates the current locale; be that an abandoned mine, or a old, smokey roadhouse, its band playing a theme eerily similar to that of Twin Peaks. 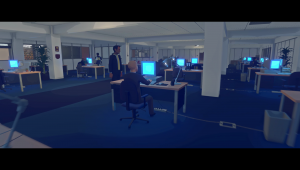 I do have one complaint about the game however. Some of the scenes, unlike those I just mentioned, deliberately don’t shift on player cue, they instead seem to run on timers. These are especially prominent near the end of the game, likely to stop you from dawdling and keep the pace up. In these short shots regardless of the direction that you walk in, or the actions that you do -or don’t- take, the game will jolt forward in time abruptly. These transitions were extremely immersion breaking for me, and near the end of my first playthrough I felt like the story was beginning to slip away from me as I tried to search these scenes for items rather than proceed to where the developers had no doubt intended.

While there’s definitely not multiple endings to the game, I was left feeling a little lost and out of the rhythm of the game; having lost my place on the chart saying what is a dream, what is a has been, and what is a could be.

By the end of my first playthrough I had certainly missed a few beats, I had, for some strange reason, become a bit obsessed with finding the collectables that could populate the protagonists home as opposed to paying attention. Points where I was meant to walk down a corridor I had turned around to look for feathers behind me as it had done this to me once already. Moments I had opted to look out a window, rather than go to the plot item than I knew laid next to me. Both of these situations saw me jolted forward. I had, as a player, not been playing my part in the narrative, and had moments ripped from me. 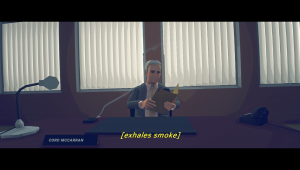 Kudos to the developers though, as the game’s story was divided liberally into scenes, all of which could be selected -once experienced in the game- from an option on the main menu. As soon as I finished the game I immediately went to the scene select as to redo the moments and see what I had missed; looking up at the right time, stashing the documents away before the game did it for me. Ultimately, however, I started a second playthrough as to try and get the story into decent order in my head.

If you are expecting a straight up detective jaunt, look elsewhere. If you are looking for an beautiful looking (and sounding) exercise in narrative, with clever pacing that’ll grip you and shake you around for just under two hours, then look no further because Virginia is what you seek.