Balls roll, and as it turns out, balls that you can control in games are actually quite hard to control. Road to Ballhalla is no exception and actually makes you do the thing you’d do years ago on a PS2. Holding the button harder to make you turn/accelerate faster!

Road To Ballhalla isn’t a race against AI though, nor is it racing against other players; so you’re not forcing those arrow keys down as hard as you can to beat another ball. No, you’re forcing those keys down because you’re becoming frustrated. You’re dying and respawning at the checkpoint just to die again because you can’t figure out how to complete the puzzle. You grow annoyed at the sarcastic narrator that talks to you through on screen text, yet you applaud the puns and perfect timing. It’s a game that juggles your emotions.

You want to know what it’s about? Okay, it’s about a ball. You’re a ball. You roll. You roll through courses that pit various challenges your way. Challenges that progressively get harder, and bigger. It’s a top down game that requires you to navigate through various courses with different elements that are placed along the way to make your play harder. Red flashing blocks that drain your health or kill you, lasers that kill on impact, huge big red balls that squash you…okay you know what, at least 97% of the elements in Road to Ballhalla are going to kill you. (That’s not an accurate figure by the way)

When you start the game, you’re loaded into a course, this course allows you to move freely, but there are portals on the ground with the level number placed next to it. This is the same the further you progress. It’s a nice unique way of choosing a level, but it would be been nice – especially after playing it for so long – to have a break from the rolling.The main menu is the same, it bares a simple layout, rather minimal and controlled only with the arrow keys, which makes sense as the game is entirely key based, but the option to just use the mouse if able would be great. You’ve got a voiceless, and faceless narrator that follows you around leaving text scattered with remarks laid down on, or around the course. The majority of the time it’s basically breaking the forth wall with sarcastic comments, or incredible puns. I bet the narrator is a Dad.

To control the ball, it’s fairly straightforward, arrow keys to roll, X key to boost. Boosting will make it harder for you to turn, but will be needed throughout levels to avoid destruction, and as for the standard rolling, you need to make sure you tap the arrow key just a little bit to ensure your ball has stopped rolling as it can sometimes just carry on rolling. There is one level, in which the entire world starts moving around, trouble is, it isn’t the world that’s moving, just the camera, so it’s your perspective that moves. This suddenly confused your brain and despite the arrow keys still doing the correct functions, your brain is telling you that left is up, and down is right. A very clever head****.

“This is a game about rhythm, and a ball. This is the best ball rolling rhythm game I’ve rolled in. I had a ball of a time.”

My personal enemy in Road to Ballhalla is the red squares, the very first ones you meet at the start of the game. They play a recurring role, and basically, when unlit, they’re a few steps darker than the standard courses tiles, but when they’re lit, they resemble an LED red block, if you’re on it, they’ll drain your health rapidly until you die, or until they shut down. They run on a sequence, so it’s all about timing. They make your ride to the end a lot more stressful, and I’m not a fan of them. They’re good though, they push you to hurry, and they push you to plan, and think.

Your ball has the ability to boost, and when you boost, you – as expected – travel faster, but this makes it harder for you to control; when boosting, you’re incredibly vulnerable. Ride over the red squares for example while boosting. Instant death.

To progress to further levels, you have to collect enough orange points per world, otherwise the next world doesn’t unlock. One world may require 78 orange points to unlock it. To collect more orange points there are two ways to do this. Firstly, you can go through a level and collect all, or most of the orange dots littered around the levels. Or you can complete the level in as little restarts as possible. Both are obtainable throughout a level, and once you reach the final portal – Which destroys you anyway – you get the final scoreboard that shows you how many orange points you got. In each world, there are also purple portals, well, there’s one per world, but you enter that one, and you are given the choice to replay the levels, only this time, in a RUSH mode. RUSH mode is essentially exactly the same as the normal mode, except you’re trying to get through the level as quickly as possible. Once you hit the end, you get your point and you’re put onto an online leaderboard where you can see various other players doing so much better than yourself.

“If you want to tastefully be driven insane by gaining perfection, this game is the one to try”

Think about Tron. The world is ever so similar; the walls (sometimes there are no walls!) or edges of the track are lit up with a neon strip. The huge red ball, that in one level is called, “Miss. Marble” is an opaque ball with red neons following it’s wireframe mesh. The red blocks on the track light up with an LED tile feel…basically, it’s a game about balls and lights.

Even your ball is brightly lit! But the difference with your ball, is that you get to style it. Yep, you get to choose what colour the actual ball is, and what colour the trail left behind is. It’s really fancy, although admittedly it doesn’t feel like there’s a lot to add, and that’s simply just because…it’s a ball. What can you add to a ball? Decals I suppose, but this is more like a ball of energy so decals wouldn’t work…I guess different patterns within it could be chosen. 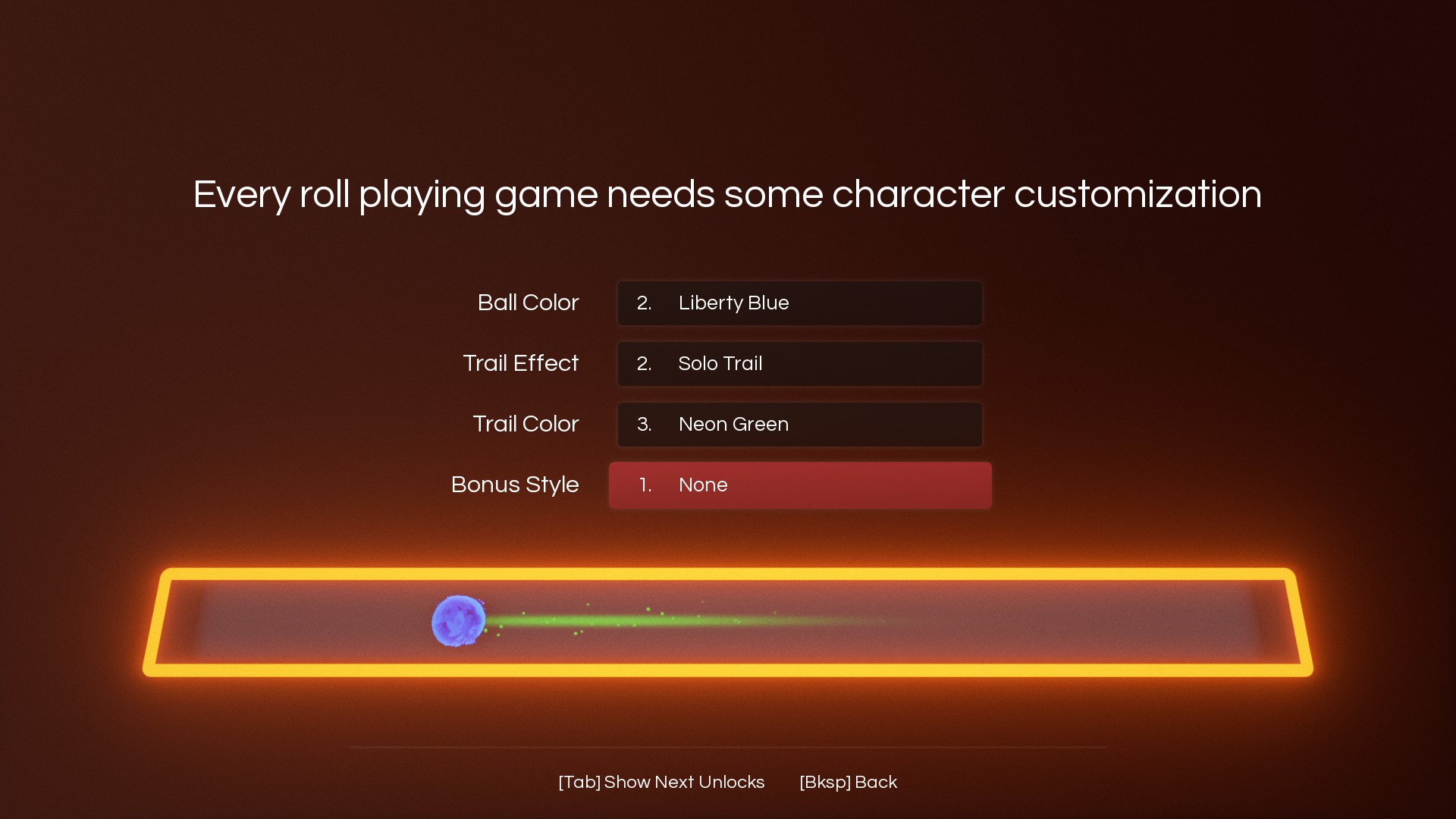 It’s not just your ball you can design, but levels too. There is a page on Steam where players can contribute their level designs to the game, bringing forth even more challenges, and rolling fun. I’m personally excited to see some of the players wacky ideas turned into reality. I gave the “Game Editor” a go, and it certainly looks relatively easy to pick up and start making the game. The tiles are easily recognisable and if you really go in depth, you’ll find a load more options. Sadly, game development isn’t my forte, so I didn’t spend too long testing it out, but from what I can see, it has a lot of options, including what type of level you wish to make. Speed, puzzle, Rhythm, or a mixture of all of them. I can see a fair amount of levels have cropped up on the Workshop already. 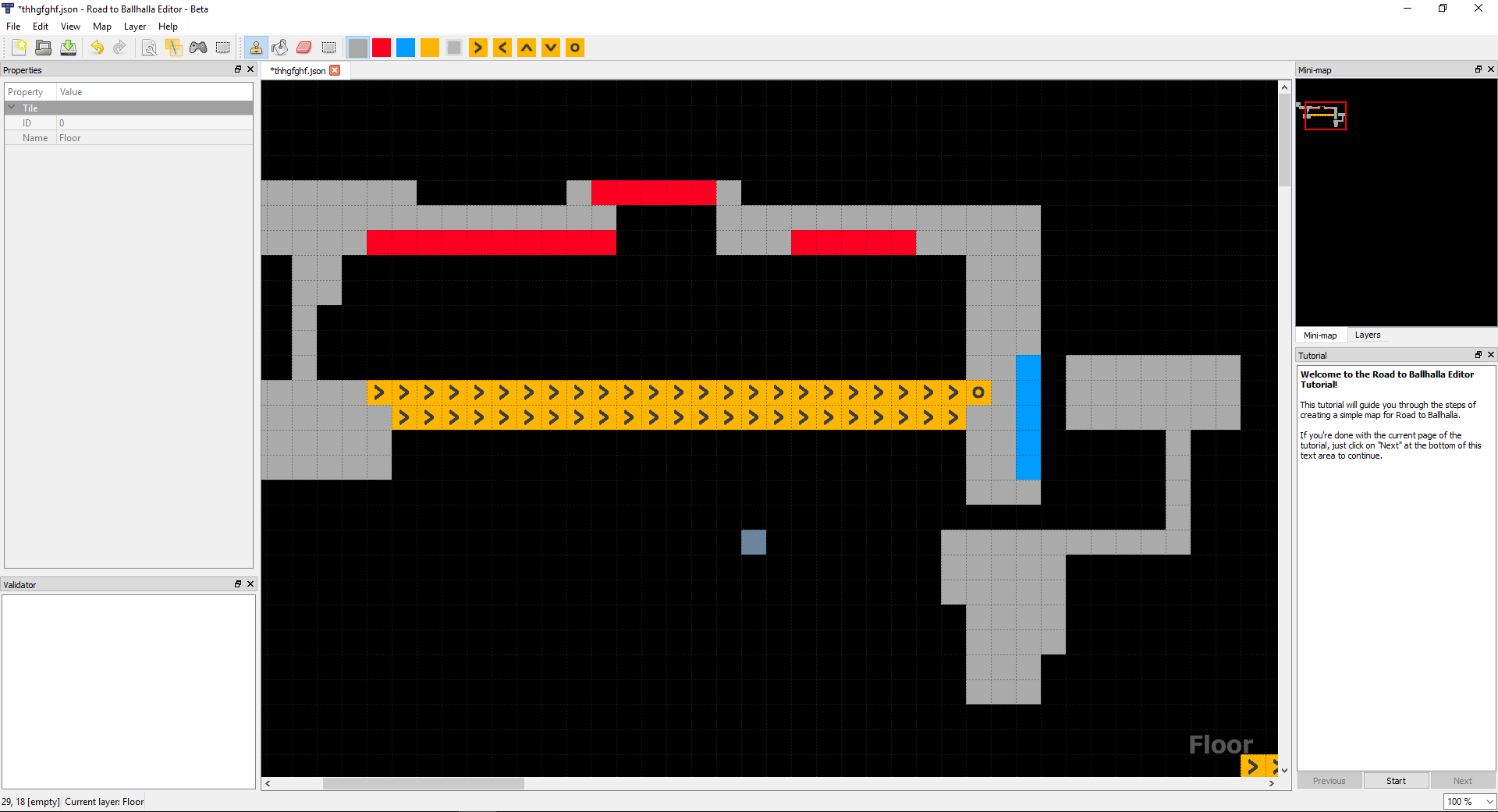 The music and sounds are very futuristic and upbeat to keep your attention going. Thankfully, because of the amount of time you may spend on a level, the music has been composed so carefully to allow itself to not become too repetitive. Even after ten minutes of listening to the same soundtrack whilst trying to finish the same level, you won’t get bored. Not only that, but sometimes the elements in the game match up to the music, a fine example would be those pesky red blocks, when they light up, an electric guitar riff would be played. Whether this was just perfect timing throughout or intentional, the soundtrack is magnificent.

This is certainly a game to grab, it’s a right gem, and is certainly a game that won’t bore you easily. The workshop allows a lot more life to be injected into the game after you’ve finished the normal modes and RUSH modes, but even then, you’ll find yourself jumping back on in moments of boredom, just to fill yourself with adrenaline and stress trying to gain either perfection in time, points, restarts, or all of those. Certainly have a look into this game if you like puzzling games with Dad jokes, wit, and pretty neon lights.