After an embarrassing number of hours’ enjoyment playing Qvadriga, I excitedly looked forward to playing Mare Nostrvm. Both were made by Turnopia, so I had a very good feeling about the game even before firing it up. With a history of chariots under my belt, let’s see where ancient warfare led me by taking the fight out into the seas.

While I have always enjoyed dabbling in ancient warfare, everything up to this point has been landlocked, so I was very much looking forward to taking the Greeks and Romans out into the Mediterranean Sea. Mare Nostrvm is definitely not limited to these two alone. In Skirmish Mode, you also have the choice of Macedonia, Rhodes, Syria, Caesar’s troops, Antonius’ warriors, Pompey, Persia, Athens, Sparta, Etruria, Syracuse, Antigonids, Ptolemaics, Tarentum and even Pirates, if you so choose!

There are a lot of variables when setting up a skirmish match. Besides picking both sides, there are over two dozen maps, some of which can be moved to set the playable area to a specific area. You can also adjust the size of each map, with seven steps ranging from Tiny to Ultra. Each map size determines how many points you get to spend on your fleet of ships. If you choose to spend a little bit extra from your force pool, you can opt for an extra commander or even an admiral! For ancient civilizations that had sail knowledge, there are also settings for wind — from steadiness and strength to direction.

Never underestimate the importance of any of your commanders. There is a strong command-and-control system built into Mare Nostrvm. Identifying your commanders is easy, as they have a large banner on their ship. Additionally, there is a toggle on the battle screen which shows each ship that is under a commander’s influence and range. If one of your ships moves too far out of C&C, they become “cut off”, which has a two-prong effect. First, you can no longer directly control them, then they automatically travel as quickly as possible to rejoin their commander and his influence radius.

The best part of Skirmish Mode for me is buying and setting up the (fourteen types of) ships. Unlike a lot of games, your individual ships can be customized — with a myriad of options and possible combinations. When you first click on a ship that you want to buy, it shows you its Manpower and Quality, both of which can be adjusted by a slider. This is where the real fun begins!

Depending on your civilization, you can add a whole slew of different items to your vessels. If you have access to sails, you can improve them. There are towers you can add which both improve boarding success and missile firing — but reduce the maximum speed of the craft. You can add engines for missile firing help as well. You can have fire — that’s a choice to, well, set enemies on fire. Additionally, you can attach a firepot to use on ram attacks, which again adds the possibility to set them on fire. Finally, there are the Harpax and Corvus, both of which increase your chance of grappling your enemy, but also makes ungrappling more difficult than normal. Note that when using the Corvus, you cannot surpass cruising speed for it to work. 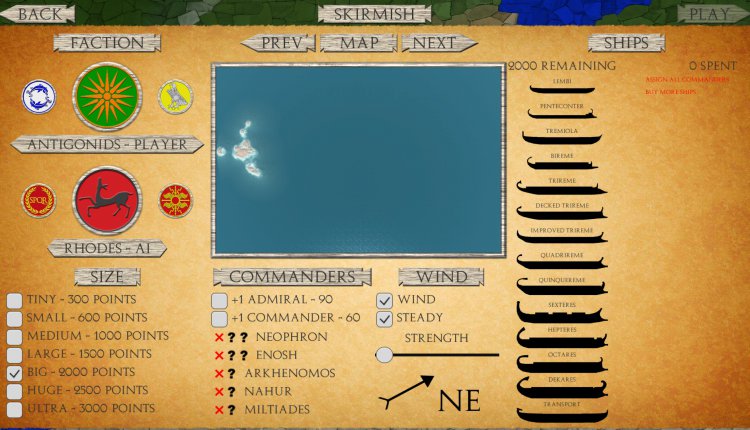 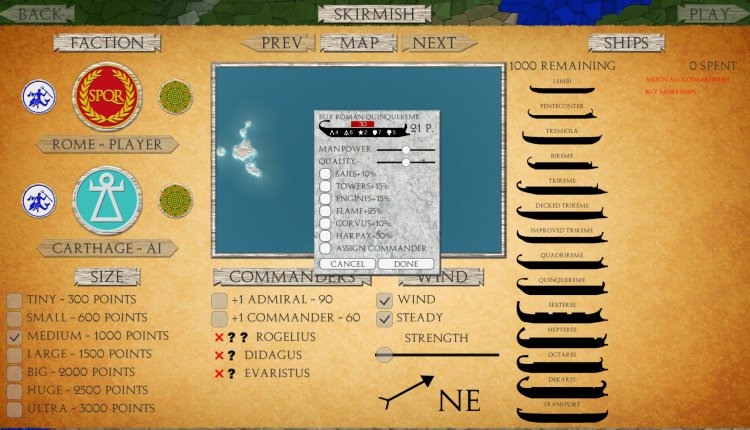 Individual ship options.
Prev 1 of 2 Next

One alternative to skirmish battles is my favorite: Historical Campaigns. Each campaign is a linked series of battles. You choose your side initially, then fight each battle throughout the campaign. You have to finish each battle in order to be able to move on to the next one. After the fight, you are taken back to the campaign screen, which shows you how the campaign is progressing while also unlocking the next battle in the series.

Your choices are, in chronological order: the Colonial Wars (Etruria and Carthage v. Greece, 535 BC); the Greco Persian Wars (Persia v. the Ionian League, 494 BC); the Peloponnesian Wars (Athens v. Sparta, 406 BC); War of the Diadochi (Ptolemaics v. Antigonids, 306 BC); the First Punic War (Rome v. Carthage, 260 BC); the Second Punic War (Carthage v. Rome, 217 BC); The Syrian War (Rhodes and Pergamum v. Macedonia, 201 BC — this is also the first historical campaign that uses sails); Pirate Cleansing (Rome v. Pirates, 67 BC); and the Roman Civil Wars (Caesareans v. Pompeians, 47 BC).

As you can see, in just nine Historical Campaigns alone, there are eighteen different sides which can be played! Even if you were to pick one side, in one campaign, and play it multiple times, there is no way any two would ever play the same. There are too many variables and, additionally, too many approaches that the AI might possibly take each time through.

All of the battles play out with the WEGO system as well: both sides plan their actions, which are then executed in a simultaneous manner. As some of the maps and battles are quite lengthy, stretched horizontally across the map, one of the best features is the rewind button at the top. This allows you to focus on what happened in one engagement, rewind the action, then move on to a different part of the skirmish. Because of that, I never felt like I had missed anything that occurred during the last turn.

Everything I have described makes Mare Nostrvm infinitely replayable and extremely enjoyable. The AI is very good as well, obviously knowing how to play already — and exploit any weaknesses I may have left open for it to pounce upon. While learning, there were times I couldn’t tell what the AI was doing (and thought it was crazy) until it grappled and rammed my ships into oblivion. After suffering a minor defeat against the Pirates, I am currently embroiled in the Second Punic War. Hopefully, my Romans will do better this time around. 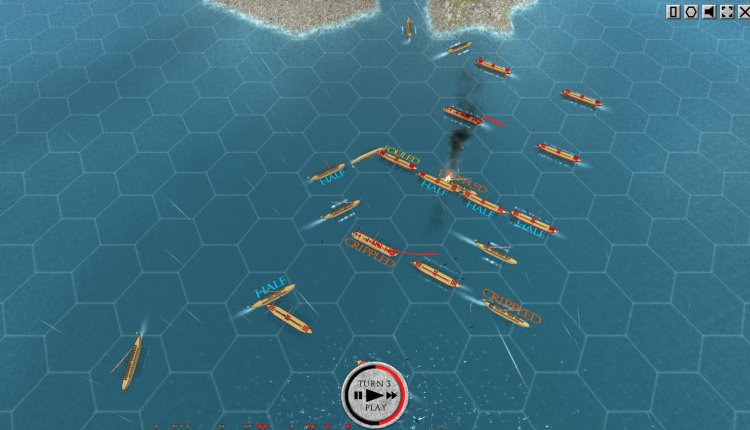 Small part of the conflict. 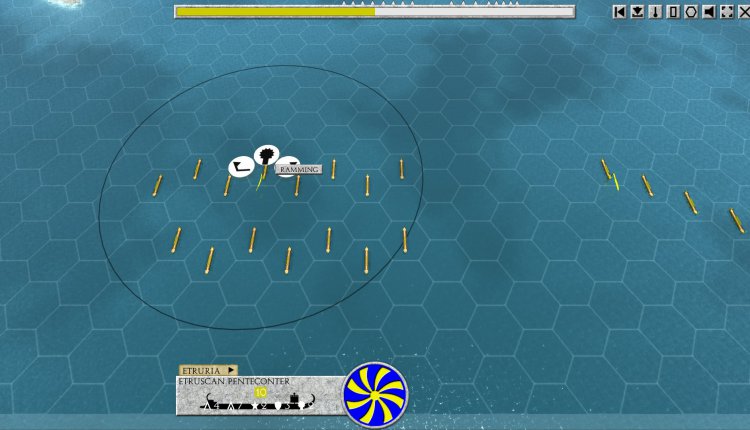 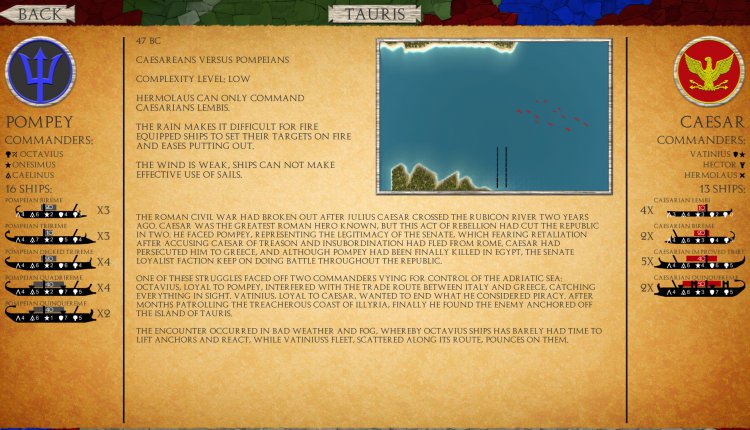 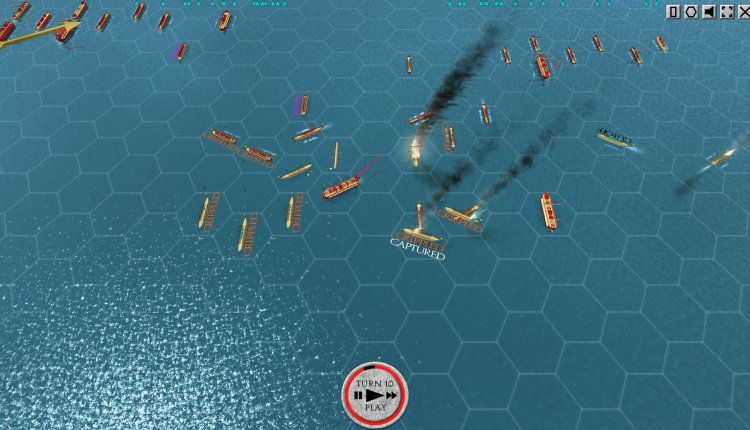 Let there be fire. 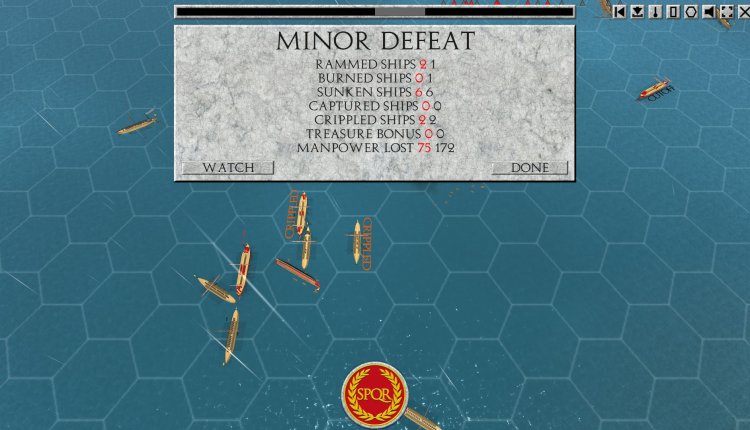 I'll do better next time. 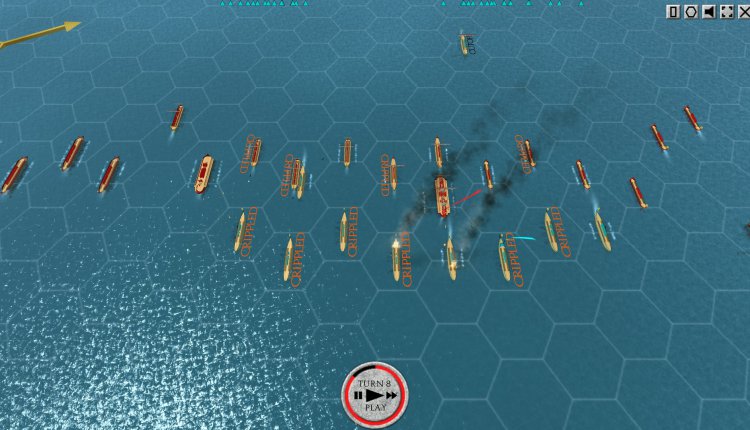 All kinds of trouble! 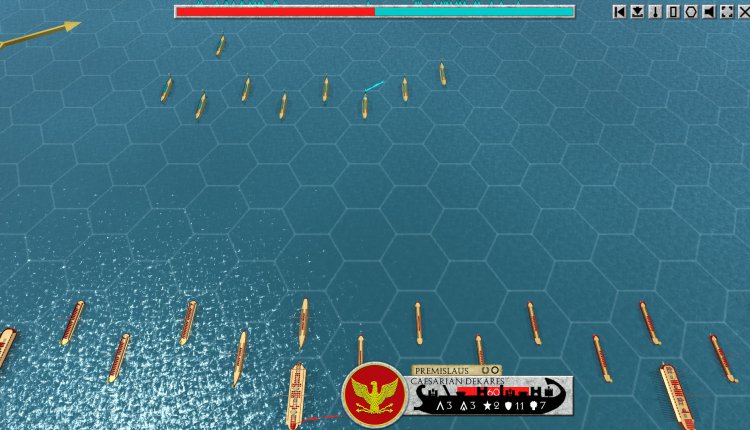 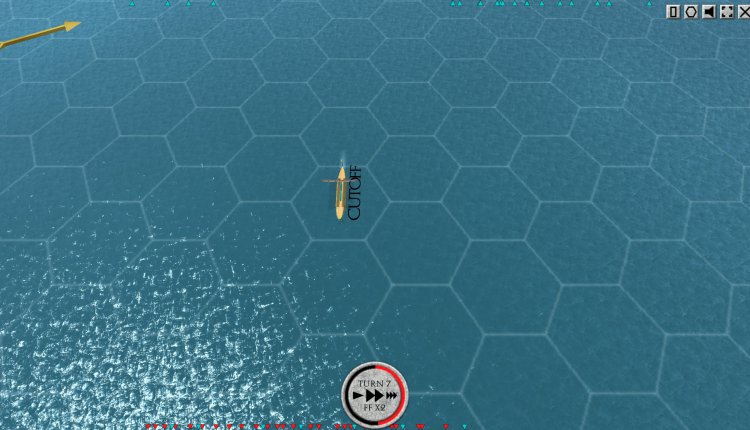 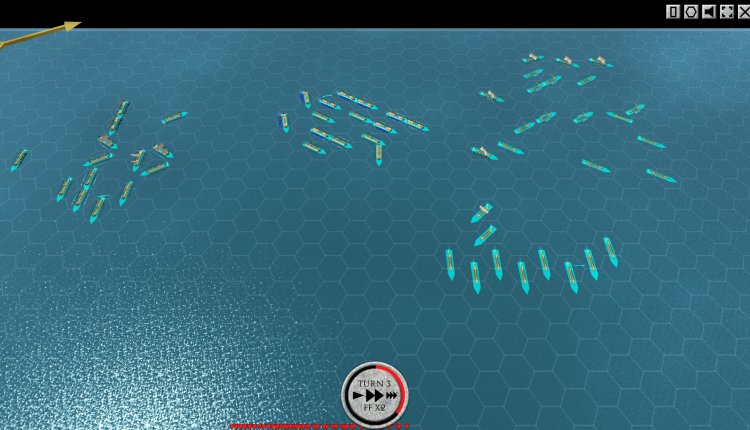 What is the AI doing? 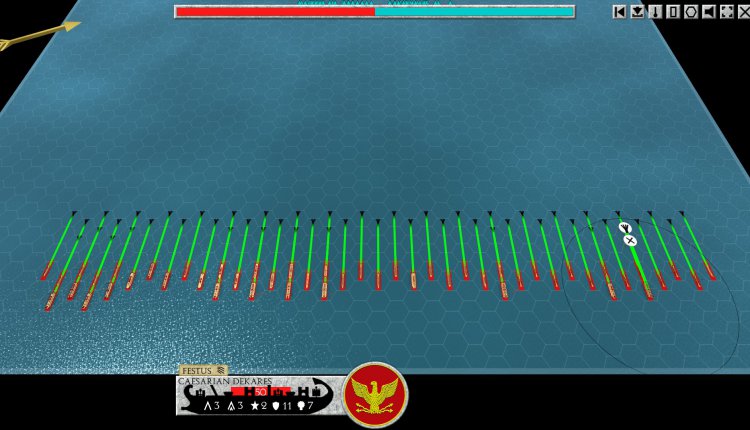 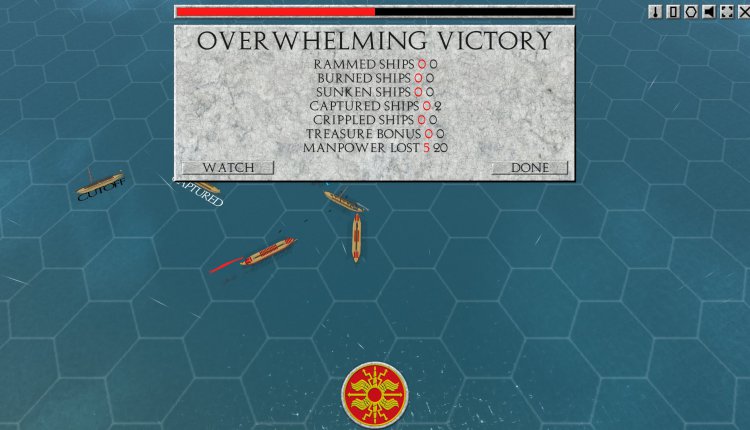 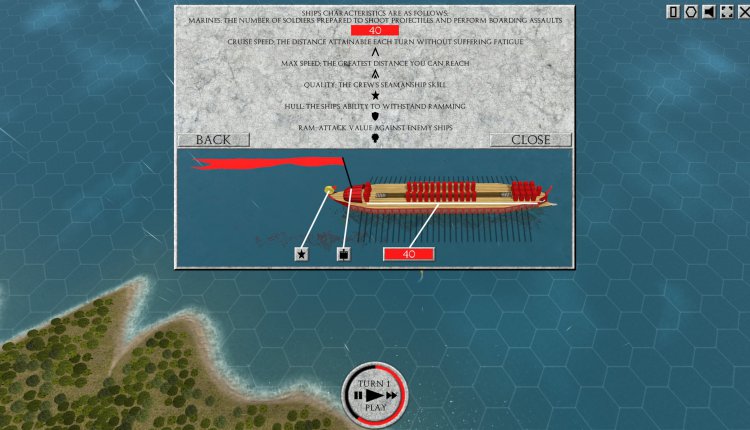 Part of a great tutorial. 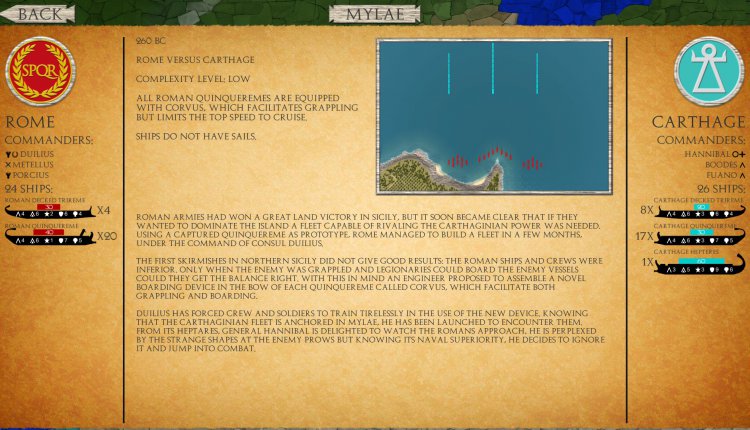