In Mystic Vale, up to four players adopt the role of druids tasked with restoring the sacred Valley of Life after a curse was placed upon it by a cruel king from his deathbed. To do so, they must develop their starting deck of twenty blank or underwhelming cards into a powerful resource-creation engine that will enable them to access more and more powerful upgrades and earn victory points. The twist? In Mystic Vale, you never swap out nor add to your deck — instead, you actually add new abilities to the existing cards.

Whilst the theme of Mystic Vale is perfectly attuned to the card art and symbols and my overall opinion of the game is very positive, it’s hard to offer any further preamble about why these druids are doing what they are doing, so I’ll skip straight to the facts. The player (or druid) who scores the most victory points is the winner, but because each player only develops their own deck and collects Vale Cards for their own use, there is never a real sense that a sacred valley is being restored or that each player is contributing toward a collective good.

What is very strong here, however, is the deck development itself and the card upgrade feature that is so fundamental to success in Mystic Vale. Known as AEG’s Card-Crafting System, this mechanic allows for a basic card (sometimes blank and often with a basic feature such as Cursed Land or Fertile Soil) to be upgraded by slotting up to three upgrades into the same sleeve in order to create much more powerful combinations. At the end of each turn, players overturn the top card of their library, then draw until a third red decay symbol shows on the overturned card, meaning they are on the verge of spoiling. With this as the starting position at the beginning of the next turn, that player may choose to push their luck and overturn another card to try and get more resources. However, should a fourth (or more) decay appear, they spoil and that turn is effectively wasted.

The spoiling mechanic is fundamental to the way Mystic Vale plays and it forces a few key decisions both as cards are drawn and when making decisions about how to improve them. Firstly, stacking multiple upgrades (some of which may add further decay) onto a single card can result in massive blowouts if, say, two decay icons are already showing, whilst at best that single card will take several turns to appear. Spreading upgrades across multiple cards has the opposite effect — less chance of unexpected spoiling, but a generally underwhelming power level. Green growth symbols counter decay, so another viable tactic is to build a low spoil deck that simply allows you to draw more cards before having to worry about it. 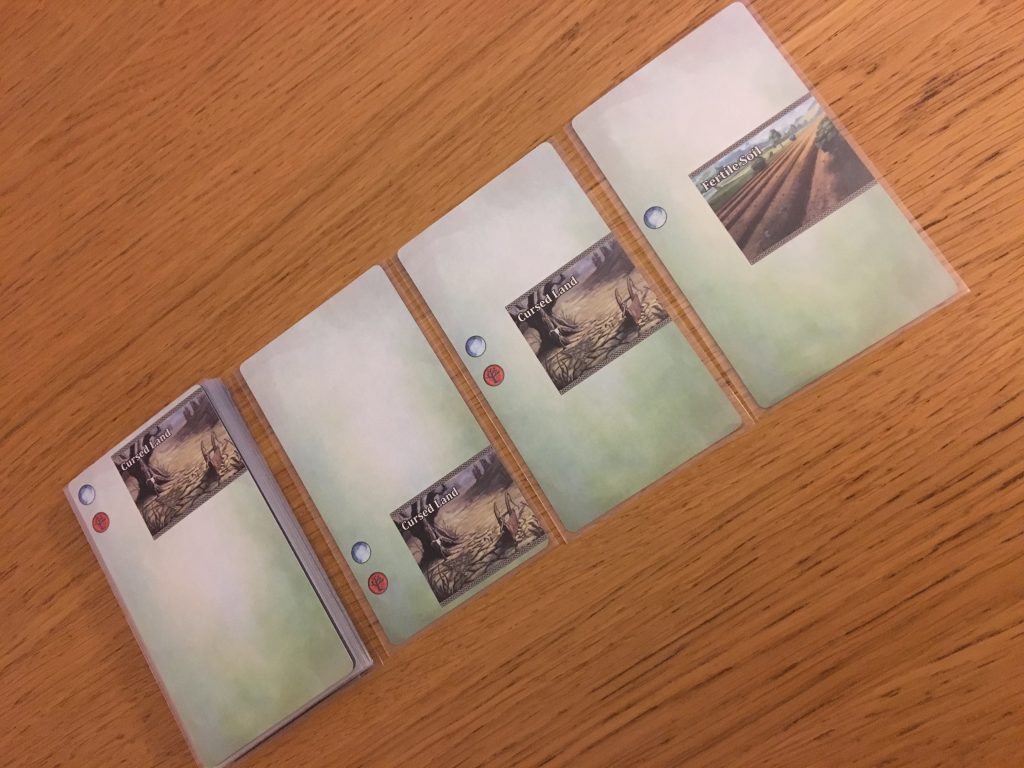 Physically crafting the cards couldn’t be easier. Each of the four identical twenty-card player decks should be sleeved upon first receiving the game and new upgrades can then simply be slotted inside them over the base card. Each upgrade card is drawn from a shared pool of upgrades, which are separated into three tiers based on their power level. The most expensive third-tier cards cost the most. You’ll see from the pictures that each card has a high, middle and low slot, so if you want to modify a card with the low slot already occupied, you must simply choose upgrades to fit the middle or high slot. Previous upgrades cannot be discarded or overlaid, so decisions should be made carefully.

Paying for each upgrade is simple. Each card has a mana cost that is clearly displayed on it and on any turn in which the player does not spoil, he or she counts up the mana and resources gained by the cards in their field and uses the total to buy new upgrades. Each player also receives a token worth one mana that can only be used once (at which point it is flipped over) but it’s worth noting that a player who spoils is also able to flip this token back up, which is a small but helpful benefit. Another, perhaps more important way to spend mana and especially the other resources is the purchase of Vale Cards. Each of these offers a significant benefit (such as a high amount of victory points either once or repeatedly, or a powerful one-time effect) but is not added to the deck, and instead becomes a kind of standing benefit that can be used whenever stated on the card.

During the early stages of the game, you won’t have a great deal of resources, so the final thing you can buy (and will almost always have the mana to do so) is an additional fertile soil card. These weak but essential cards are kept in a separate pile and can always be purchased for a couple of mana. This option — plus access to no fewer than nine ‘more interesting’ upgrade cards at all times, as well as the Vale Cards — means that you’ll never run short of ways to enhance your deck and create the scoring engine that you think will win you the game.

For example, aiming to purchase a couple of Fertile Land cards every turn for the first two or three rounds and playing relatively conservative is viable, as is pushing your luck to try to draw enough mana to buy a powerful but expensive card like Dreadcoil Cobra, which brings you four points closer to victory with each harvest phase.There are more complex strategies and sub-themes, too — collecting those Growth symbols to counteract decay, or focussing on the more specialised and powerful Vale Cards.

Mystic Vale is incredibly easy to teach to new players, which means that you’ll likely be able to get three or four games in each time you play — a feature that I have found to be incredibly useful in bridging the gap between gateway games and more complex ones. Not only are players able to pick up the mechanics of play easily, but because each deck begins very simply and with identical cards, it’s really easy to understand how deck modification steadily expands the trigger points. Mystic Vale has a very natural way of easing people in at the shallow end, but it does allow for long-term strategies to be formed that can make anyone feel quite smart.

A related factor that I also appreciated about Mystic Vale was the realisation that there really does not appear to be a definitive path to victory. Strategies can be influenced by the cards that appear on the table and it is certainly possible to buy cards you know an opponent wants. With nine to choose from, though, it’s impossible to close down all strategies because you simply won’t be able to afford it. The number of victory points needed to achieve victory also scales with player count; in both two and four player games (I never tried it with just three) it felt spot on, with no game after the introductory ones being runaways. 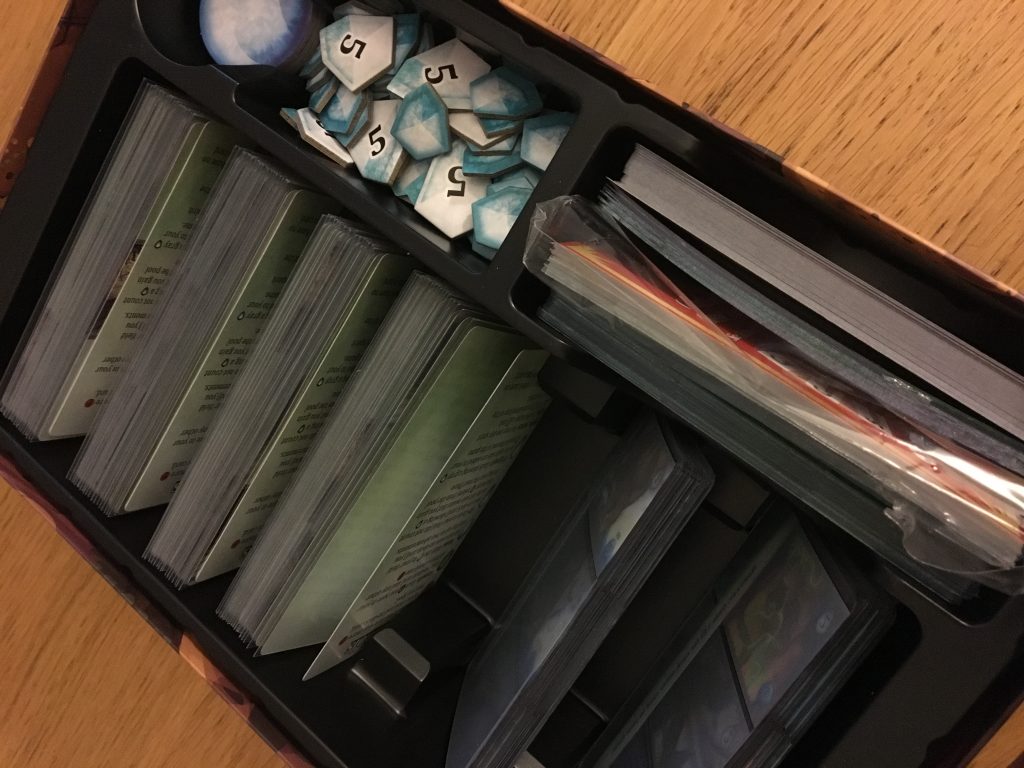 If I can describe a drawback, I would probably say that whilst a few games per session is likely to happen time in, time out, many more games than that will be very infrequent. Among my playing group, we simply found that the range of cards became a little stale after a while, although we were still enjoying the game. As if in response to this exact criticism, a quick Google search revealed that expansion packs already exist. I’m certainly not saying that Mystic Vale is bad value out of the box, because it’s not — this is just something that can happen in fast-paced card games.

Mystic Vale ranks alongside Century: Spice Road as one of my favourite simple card games to play with just about anyone. It has a slightly overlarge box for true portability, but it has the kind of gameplay that makes me want to stuff it in my work bag and produce it in the pub after a hard day of adulting. At home or with my games group, it’s the kind of game that perfectly kills time before, between or after the much heavier titles that I otherwise enjoy. I like it so much, in fact, that I’ve already ordered the Vale of the Wild expansion and I look forward to seeing if it does indeed correct my only complaint with the game.

A copy of Mystic Vale was provided for review purposes and can be purchased via 365 Games or through one of the shops found in this handy Store Locator.

Mystic Vale on Switch is a perfect port, but not much more