A nation divided while heavily influenced by the major powers of WWII.

Since I recently reviewed Slitherine’s superb Panzer Corps 2, I was honored to be able to review its first DLC: Panzer Corps 2: Axis Operations – Spanish Civil War. This is the first campaign in the game from the Axis point of view. More importantly, it covers a part of WWII which often doesn’t get put into PC wargames — when it does, it’s usually, but not always, Slitherine. (Had to be careful as there are a couple of pretty good, non-Slitherine Spanish Civil War games out there.. but that’s not what this is about.)

If you ask most people when WWII started, they’ll generally answer 1939 or 1941. The Spanish Civil War was actually like a ‘precursor’ to WWII, which ran from 1936 to 1939. However, many of the ‘outside’ participants (backing forces) were later directly involved in WWII. The Nationalist side was supported by Nazi Germany (Hitler) and Italy (Mussolini). The Republican side got help from the International Brigades (assistance from North America and Europe) as well as the Soviet Union. To me, it’s always been fascinating the role of the U.S.S.R.’s involvement in WWII. They were on this side, then that side, then back to the other side… but again, that’s not what this is about.

Of course, with an earlier timeline, plus different countries (or, technically, a split of one nation into two factions), the first thing I had to get used to were all of the different types of equipment! Having played a multitude of WWII games, with only a few during the Spanish Civil War, I was quite unfamiliar with the majority of the Tables of Organization and Equipment and/or both sides’ Orders of Battle.

However, having previously played Panzer Corps, Panzer Corps 2, Order of Battle, etc., the basics were customary and easy to adapt to. If you’ve never played a wargame from Slitherine, (cliché incoming like artillery fire…) it’s easy to learn, hard to master. Actually, if you’ve ever played any kind of turn-based strategy, war or not, Panzer Corps 2: Axis Operations – Spanish Civil War is easy to paradrop into.

Since I went into depth about the mechanics of playing Panzer Corps 2 in the previous review, this is more about how to get into this quagmire (giggity) — especially if you’re unfamiliar with the equipment of this time in history. I’ll touch on a few, non-spoilery (as usual) things as well. 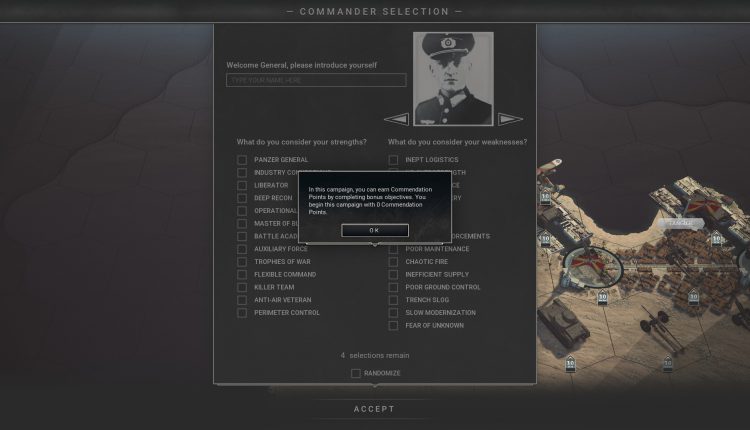 Setting yourself up to be ready. 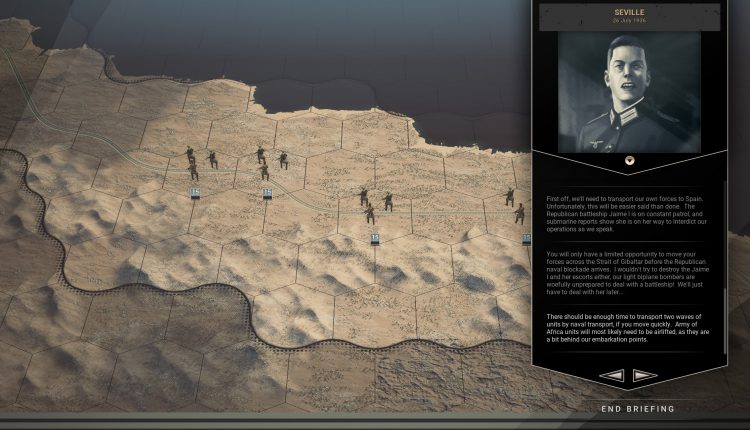 We'll have to move these troops across potentially dangerous water. 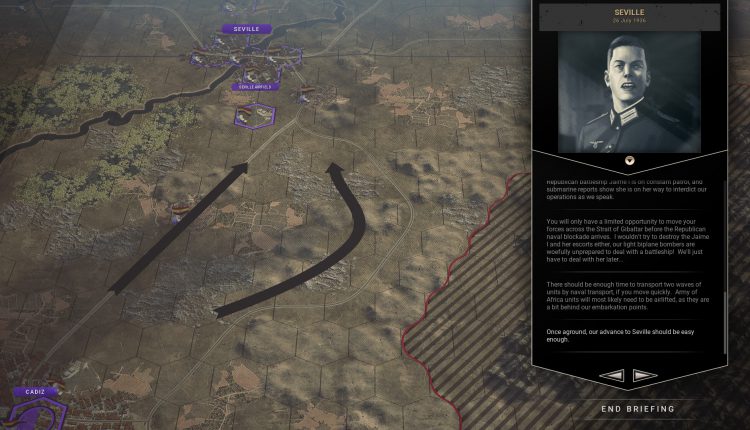 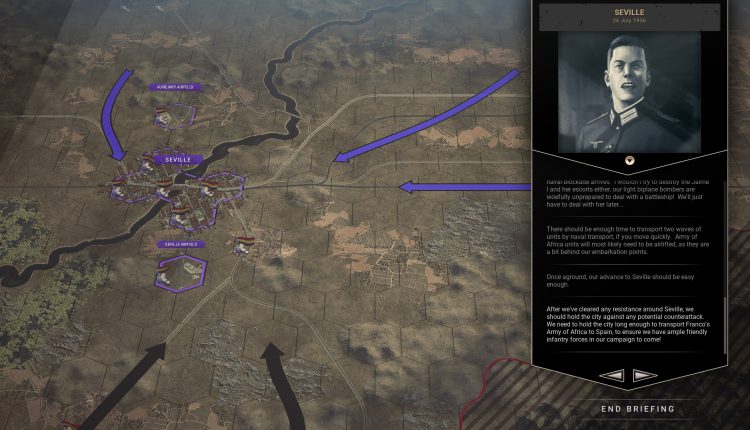 Conquer Seville, then hold onto it. 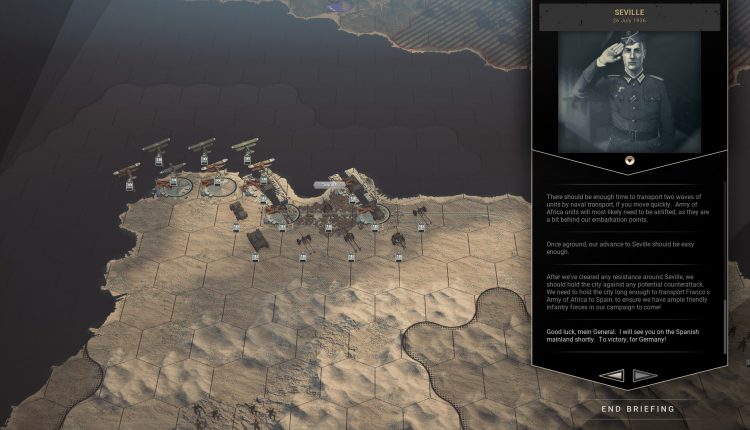 There’s tons of training for you, in Klappspatens (spades/shovels that fold up — just in case your German language skills are rusty… like an old German Klappspaten). Of course, there’s an in-depth and very thorough tutorial. However, that’s merely the beginning of learning Panzer Corps 2: Axis Operations – Spanish Civil War.

Whenever you choose, there are Tactical Advisor Tips. These are short, video tutorials that explain various technicalities of specific aspects of gameplay. They open in a browser, plus you can pick and choose any sequence you want, whether or not to watch all of them, just some, etc. The opposite of some games in which you have to watch them, in order, sometimes even to unlock the next one. That’s the bottom of the latrine stuff, man.

Next, are (ten) Tactical Puzzles. Once again, in any order. These are one-turn exercises that test your understanding of different parts of the game. All of the randomness is turned off, plus the AI doesn’t move. However, none of these are a strudel-walk (not even streusel either). If you don’t make it the first time through, try, try again. You’ll get it… in maybe a few tries, not like a thousand or anything.

Finally, there’s a Tactical Challenge. It’s a small, multi-turn, puzzle-like scenario with an active AI. It’s very close to actually playing the full game. Once again, it’ll get your caterpillar track wheels grinding, but it’s not anywhere close to impossible. You wanted a strategy game, you got it!

Once you feel you’re ready, provided you didn’t just parachute right into it, you will be tasked with the entirety of the Spanish Civil War… starting in Seville and going all the way through until… newp, not going to tell ya (naga, nagadoit). If you know your history, fine, you’ll know about where you’ll end up. If not, it’ll be a surprise — like all the battles in between will be for you… and there are more than plenty to fight through.

How do YOU attack Norway? 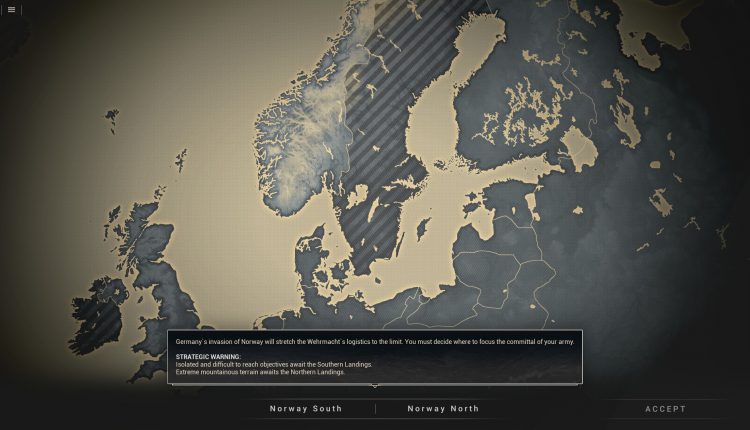 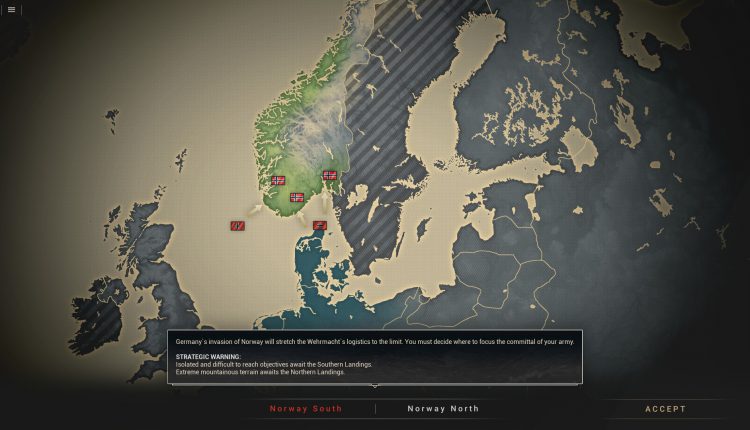 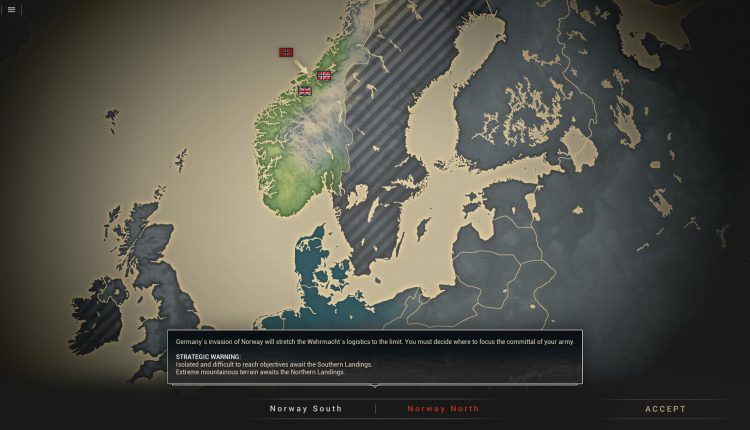 What do You do about the OstFront? 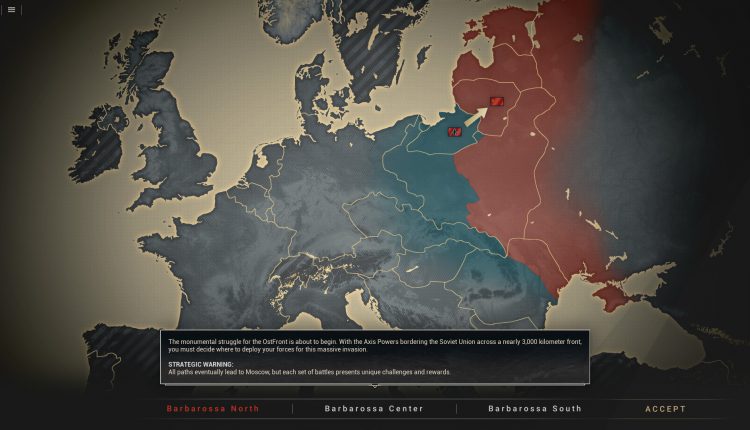 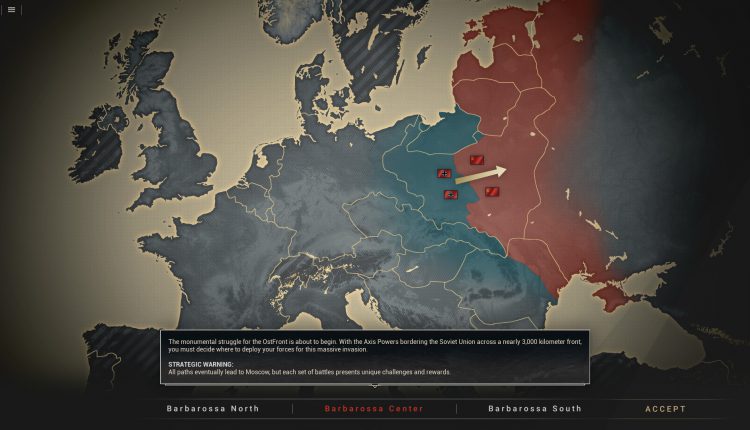 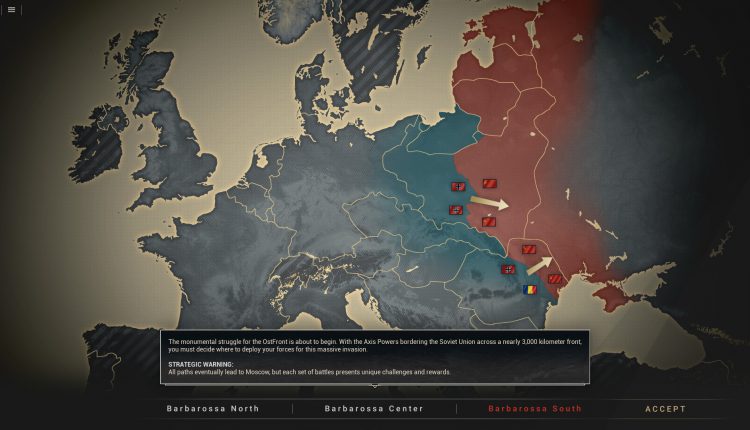 They’ve also added some bonus missions to Panzer Corps 2: Axis Operations – Spanish Civil War. They’re historical in nature and it’s up to you to accomplish them… or not. Extremely interesting wrenches thrown into your props, just to shake things up a bit. Besides being history-based, they’re just. plain. wicked.

They’ve also tweaked the Influence Points a little. Depending upon your level/degree of victory (basically, ranging from ‘barely’ to a ‘slaughter’) you can earn Commendation Points — which are also awarded by completing the bonuses mentioned above. There’s a wide range of things you can spend these points on that’ll help you and the Nationalists to ultimate victory. Again, no, I won’t tell ya — when you play and win each battle, you’ll see. Needless to say, Slitherine got extremely creative with these.

At times, you’ll also have the Nationalists’ AI on your side helping you! They’re not just out there running around, randomly doing what they think is best for their country. They’ve added and devised ways for you to give your AI helpers orders, so it’s not just some uncoordinated free-for-all or cluster… err… bomb.

The absolute best part of all: your core forces will carry over into the next Axis-based DLC, Panzer Corps 2: Axis Operations 1939… which is already released. (*insert Homer drooling meme*) Had it not taken me 27 years to write this one up, I might already be playing the new one. Obviously, I’m giddy with anticipation.

Overall, this was (is) an extremely fun addition to the Panzer Corps family. But, I tell you what: it’s also tough. You’re unquestionably earning your Influence and Commendation Points. During a Civil War, both sides have everything at stake — the entire fabric of their country’s in jeopardy. Your side has been chosen, so it’s up to you to lead them to victory. 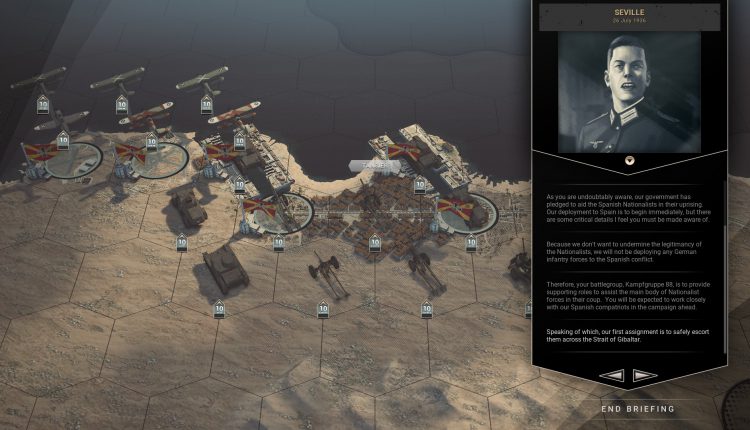 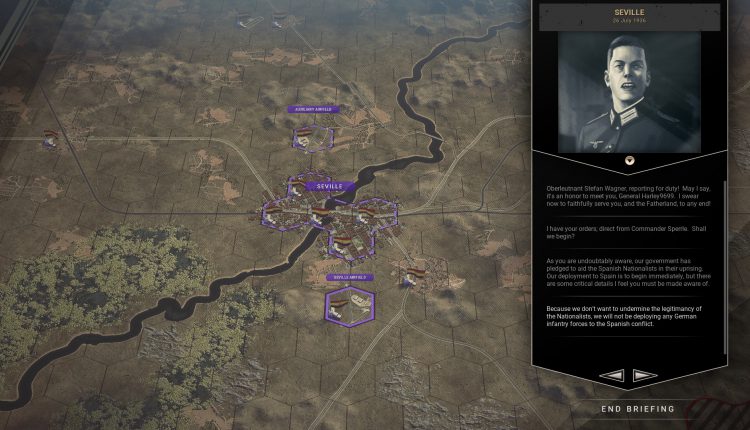 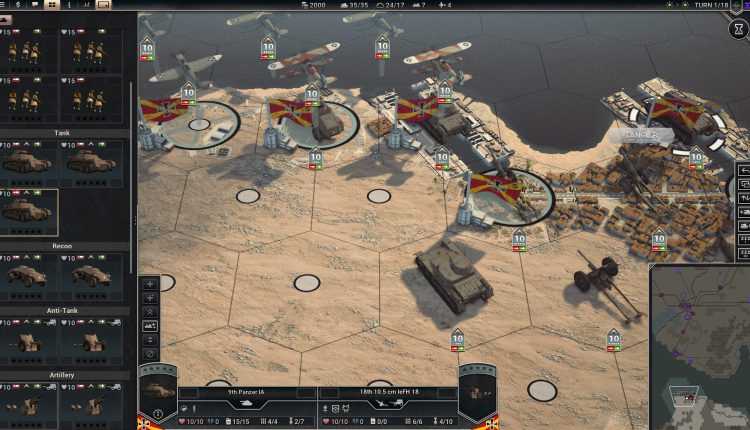 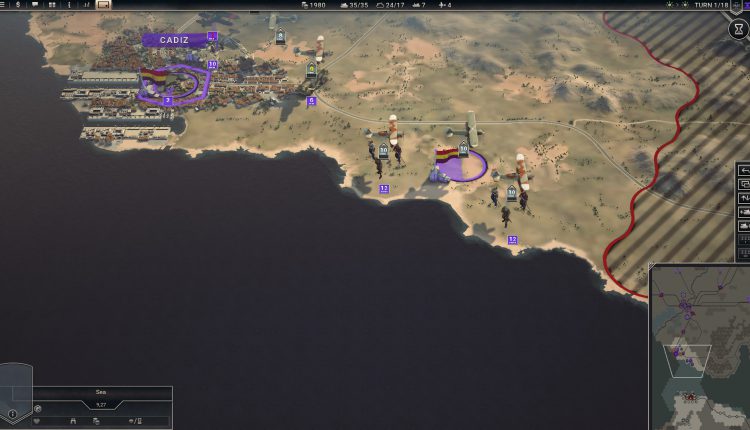 Yeah, I'll send planes over on the first turn. 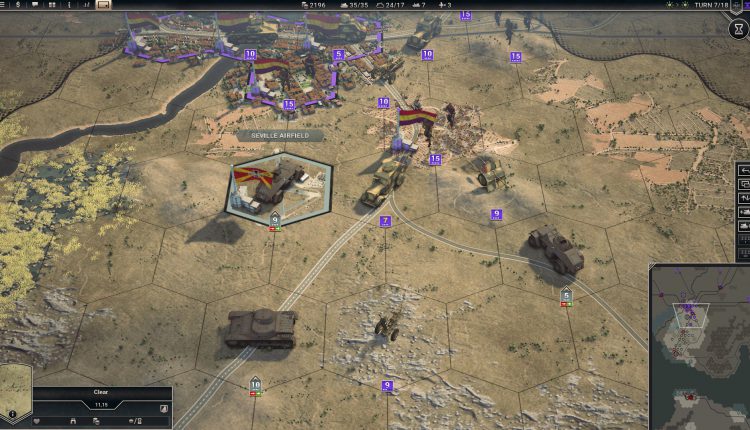 Crap, that's a Lot of opposition. 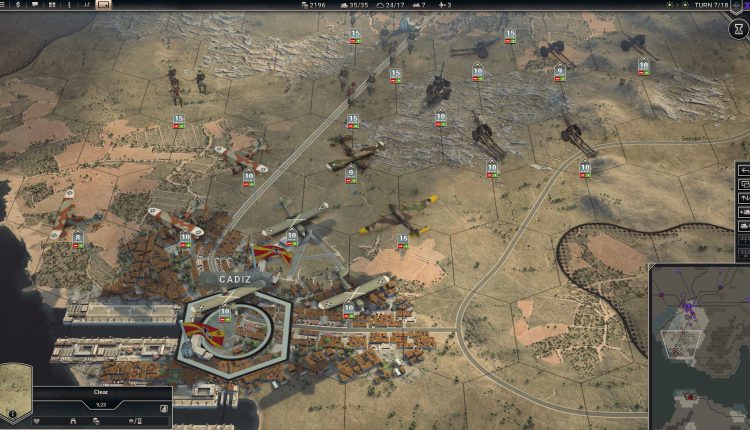 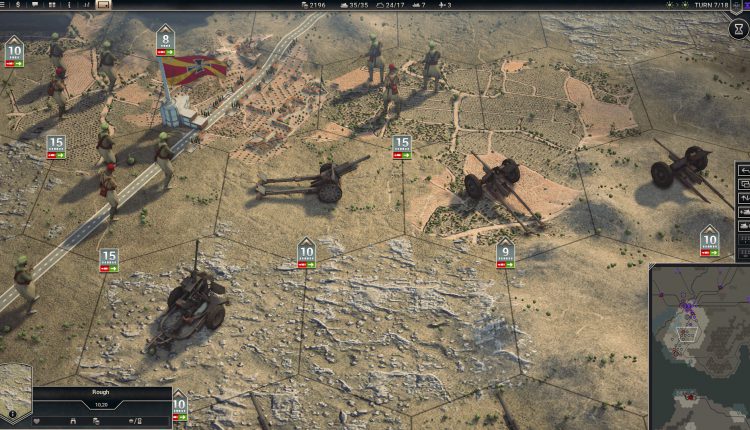 I'm close to my men. 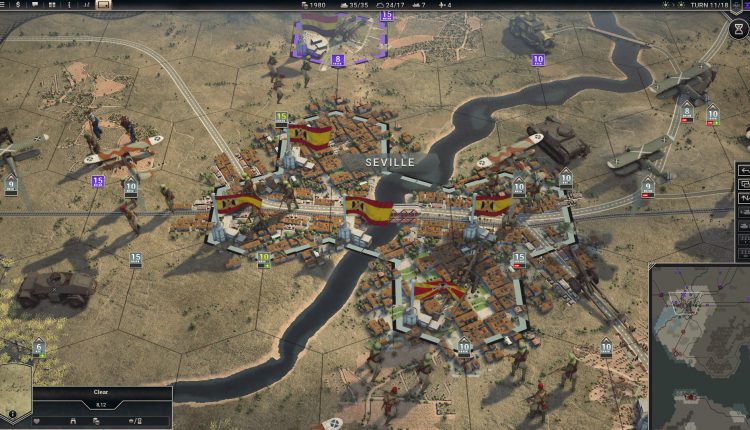 I believe we now have Seville. 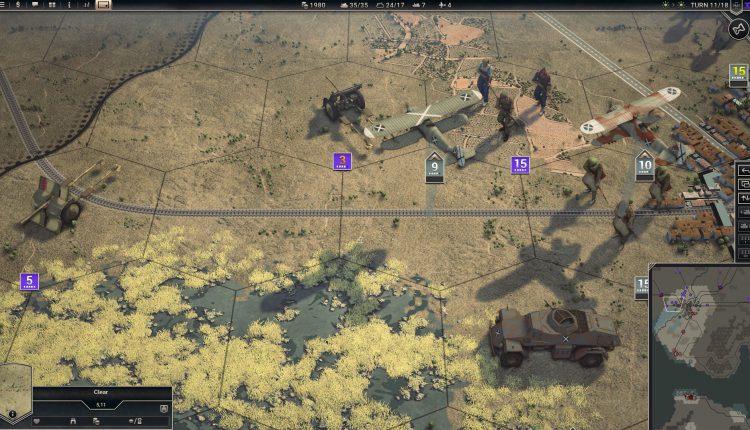 West of Seville: They are Not giving up. 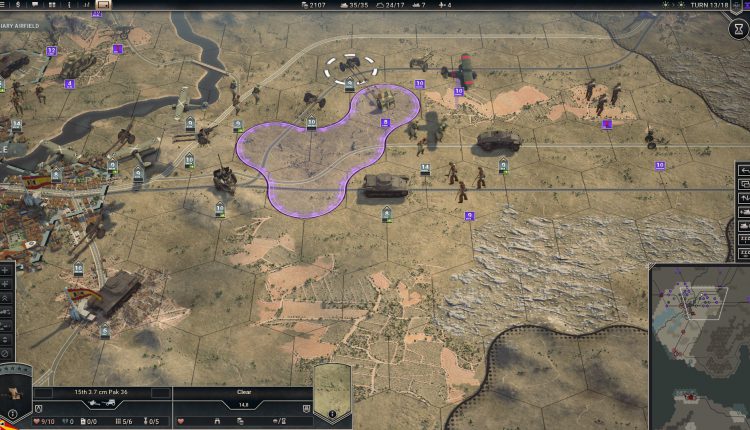 My Anti-Tank is not encircled, whew.
Prev 1 of 10 Next