The following review is running on version 1.09

Rather than asking me what this game is like, or asking me if it’s any fun, you should probably ask me if it’s a game that can sprain your finger and either bruise a nail, or trap a tendon in the knuckle area. The answer is very simply, yes. Clustertruck is a very fast paced game developed by, Landfall Games, and published by TinyBuild. It holds no story about why you are in the situation I will reveal soon, however it uses a very simple concept of jumping across platforms through a first person perspective, but adds the animated twist of making those platforms moving trucks. You have to reach the end goal by jumping from truck-to-truck. They could be steering round obstacles, they could be just driving straight, or they could be driving towards you; all you need to do is stay on top of them, progressing closer to the goal. If you take your time, timed events will begin and stop progression, if you go too quickly, you’ll miss certain timed events or get too far ahead, and if you fail, you’ll have to start from the start.

Let’s get into this a bit more in-depth. You’re an unintroduced, genderless character. You have no body, no legs, and not even a shadow. You don’t exist, but you do. If you land in front of a truck, it’ll smash into you and flip, roll, and tip away, so you certainly do exist. As standard, your character can run at a normal rate, which is actually a bit faster than how fast the trucks below your feet are moving. It is possible to flip by pushing the mouse forward, but it doesn’t register as a trick I found, but it does leave you a personal feeling of satisfaction, but is sadly one of those life moments where you do something cool but no one is around to see it. You can sprint, which is way faster than the trucks and helps you cover distances with more ease; and you can jump. I found holding the jump button results in more air time than if you just tapped it. You cannot touch the floor, obstacles, or surrounding scenery, which makes making that landing the most important thing you can do. I’ll explain why when I detail the trucks mechanics shortly, but you’ll have to act fairly swiftly and not just ride out the level on the first few trucks. You’ve got to make it ahead, or just ahead in order to succeed and progress.

Trucks. These are your platforms, and they will begin moving when the games mechanic tells them too. They usually run on a timer from what I’ve experienced. For example, the first cluster of trucks you are atop will begin moving the second the game begins. There may be a second cluster of trucks further down the track that won’t move until a certain time. As there’s no visible timer it’s down to you being speedy. You are not allowed to touch the floor, obstacles, or surrounding scenery. If you do, it’s back to the start. Trucks will normally, but are not limited to, follow three patterns. Pattern one: A one truck, followed by two truck formation. Pattern two: a singular row of trucks spaced at various distances. Pattern 3: A one truck, three truck formation. Whichever pattern emerges, you’ll be able to jump to each one, with ease or difficulty. The trucks usually stay uniformed in relation to speed, but they tend to drive into each others sides and hold that formation, essentially creating a large platform.

There are levels in which the trucks speeds and formations are entirely random and results in various hard-to-land landings. Whilst the formation, and speeds may be random, if you restart, the the positions and speeds will be incredibly similar to the previous turns. Basically, the trucks have a set pattern no matter how many restarts it may take to complete the level, they just don’t follow the usual uniformed cluster, and as such becomes a bit more manic, and the physics change it up, so every play is different in some way. Talking about levels, you’ll find a load of different settings, each world has ten levels to complete. These range from Forests, castles, steampunk, sci-fi, and more. Each world comes with their own obstacles and themed props, and the ten levels you have to complete range from various difficulties, it’s not a conventional, start easy, finish hard, but rather, it’s suited to your playing style, some levels you may be more masterful towards than others. Myself for example, I’m far better at the levels in which I have to fall from great heights and land on a truck, but I and terrible at the levels with obstacles.

When it comes down to obstacles, it’s very confined really, and leads to a lot of near misses. You’ll get levels with pipes, fences, or various other horizontal structures that you can either jump over, or go down to the front of the truck and go under them. You’ll get vertical structure that normally requires precision to go through them. Sometimes you’ll be faced with both in a bulk. You’ll have lasers moving around in a pattern, air vacuums, huge medieval swinging devices, trucks being launched at you, and many other various obstructions that strongly effect your run. As mentioned earlier, the general game play for each run is kind of set in a certain way, trucks will do certain maneuvers at certain times, and while the bumps in the road can affect the physics of the trucks, when it comes to the trucks being knocked by these structures, it can either make the game a little bit easier by accidentally lending you a hand in launching your character into the air, or it was completely kill the run by stopping you dead. I really like how it does this, and keeps the game fresh; no matter how many times you have to restart.

The game features some, “Abilities” that are available to unlock with points earned throughout playing and completing levels. Ability points can be earned by completing a level with great speed, and doing fancy tricks, such as jumping off a truck mid air. You have two sets of abilities available. Ones that effect your character directly, and ones that affect the world. Character abilities are activated with the left mouse button, and the right mouse button activates the worlds abilities. In regards to the character abilities, you can unlock jetpacks, double jumps, grappling hooks, levitation, and more. As for the world abilities, you can make the world slow down, spawn a truck, freeze trucks, enable epic mode, and “SUPERTRUCK!” Abilities are fairly well explained, and titled to basically make sense from the title alone. Activating them during the game will show a bar that drains the more you use it, but it begins to refill a couple of seconds from the moment you release the left/right mouse button. You’ll find that while some abilities are not required, they will certainly aid you if you’re struggling. Sometimes you may need to slow time down because you can’t focus on everything that’s going on. Sometimes you’ll need to double jump rather than levitate. The only thing I feel that would improve my experience with abilities would be to have an option in the in-game menu, as currently you are required to leave your level, head to the main menu, select your abilities, then return to your level again. It’s a long winded process when a simple, hotkey, or menu function could stop that immersion and not detract you from your run. 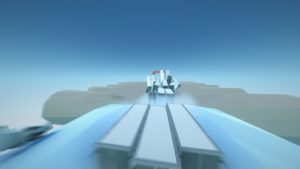 The music within the game is as you’d expect from a game of this type. heavy in synth, beats, and upbeat. Each world hosts a different sort of soundtrack, and keeps you motivated to carry on, to keep restarting if you fail, the beats don’t bore you, the synth doesn’t drone on. In fact, the score is very nicely well done. Like a steak. The sound effects a bit overshadowed by the music, but you’ve got a good range of effects, but the most important one is the explosion. BOOM!

The graphics of the game are very minimal, whilst still maintaining a rather high quality feel about them. The trucks aren’t incredibly detailed, the world around you doesn’t need to be too detailed due to the speed you travel, and the shading is gloriously soft, and gives the game a smooth, comical feel. The worlds seem to start of, for the first four worlds anyway, looking rather simple, but as you progress, more graphical elements come into play. Light blooms take shape, neon lights glimmer amongst the darkness, and the seasonal content takes a slightly more advanced shading system. There’s a heavy motion blur that takes shape the faster you go too, but it’s not distracting, nor is it over-the-top, it actually feels like you’re being forced back by G-Forces, your eyes sinking deeper into their sockets, and your skin sagging behind you.

The game features an in-game editor, that seamlessly allows you to jump in and begin using a 3D software, coming with a huge collection of props, obstacles, and allows play testing. In fact, it runs magnificently smoothly, and I’m surprised it’s even built in with such ease. The ease of use makes it accessible to entry level users, and experienced users alike, and as a result has allowed gamers to share their creations to the Steam Workshop, allowing them to download a wide range of new maps to enjoy, and interestingly, users have been able to create maps that don’t require trucks, and purely focuses on jumping around.