I’ve recently returned to Dark Souls II’s world of Drangleic, via Scholar of the First Sin. Dark Souls II remains the most maligned of the three Dark Souls games, but in my opinion is the  second best setting, whilst also factually being the second entry.

I purchased the vanilla version of Dark Souls II on launch date and completed it over the following week. I then seemed to fail to return with the same chutzpah to re-complete it. I waited for reveals on what was going on with the flames in the mansion and other unexplained mechanics — things which have since been lore-mined dry.

It’s the only Souls game which I’ve completed on my first attempt. Each of the others were split over a month, or even a year. However, that week — four years ago was great — everyone was new to the game, people were looking for links to the previous game(s) as well as the systems which had changed, or even reverted to those of Demon Souls. 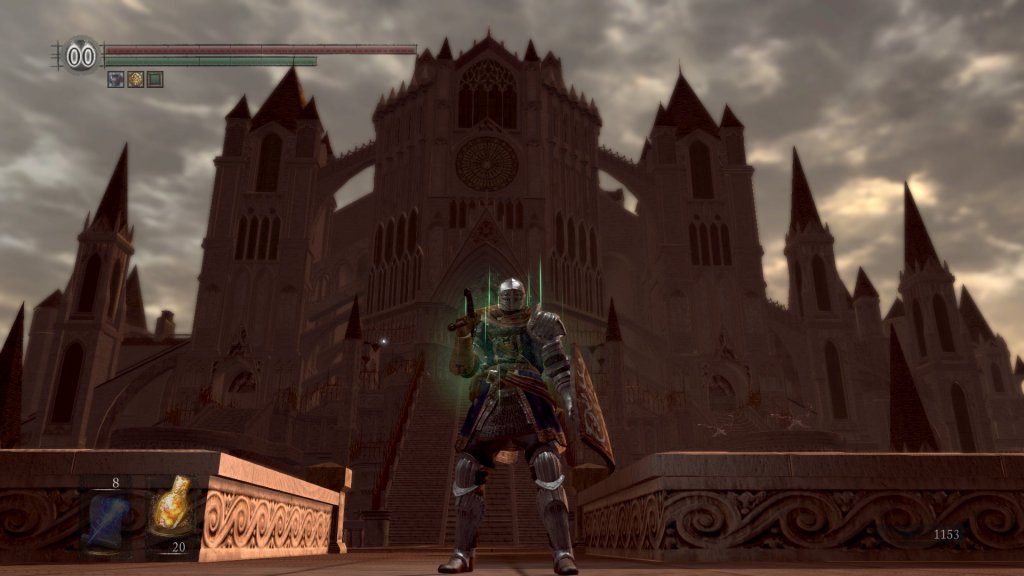 The main point of this series is to highlight the ways in which we play and what influences those choices we make — whether it’s an external thing or simply an impulsive, rash idea. I find the variety of options laid out in the Souls series a great talking point; a section of the internet devours the series, while a different quadrant has a very different image. It’s a timing window game, but not in the style of a rhythm-game, more that of dodging an attack by jumping versus nailing each button prompt

This is technically going to be about my playstyle, but there’s going to be lots of talk about the differences between Dark Souls 1 and Dark Souls II, and why I choose the sequel as a favourite.

Sword/Axe/Mace/Pyromancy is normally how I get my footing in a Souls game, but just like in Pokémon, sometimes using fire against water isn’t a smart idea. In the previous games — and also in Pokémon — the trick is to spend the time levelling up something new which doesn’t have those problems, or go the other way and just overpower them. Both Pokémon and the original Dark/Demon Souls seem to lack a re-specialisation system. 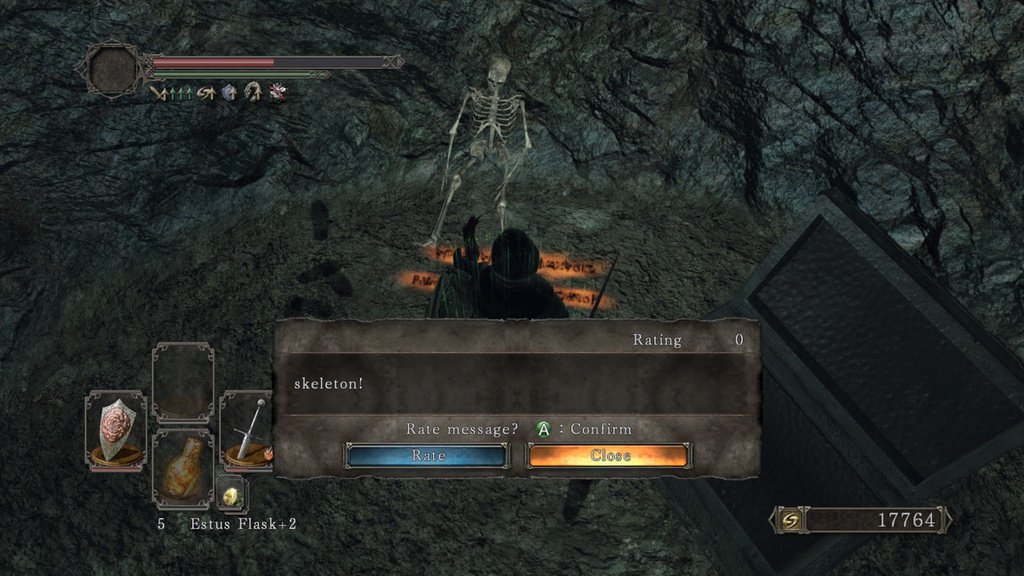 This is where the game and its sequel differs from the previous entry; there is a way to re-specialise your skills. One tied to a specific NPC and a rare drop. Dark Souls 3 makes you pay a further price, in that it’s limited to five times a game, with a reset every NG+ level.

This is barely a price to pay when compared to the Demon Souls system, which technically allowed you to lose levels and not respec the points, merely taking the points away. This was aggravated by the fact that invaders could cast the spell repeatedly on you, and due to the lack of a ‘You have deleveled’ notification, it meant some people just assumed it was a weird buff, due to the zero damage it was causing.

Back to Dark Souls II. By using the respec, you can go from axe-wielding fire man to a holy man who can shoot lighting spears, or simply a thief with the dexterity to dual wield poison-coated katanas. It’s less definitive than having to grind out a respec, and more often than not, you have an inventory with upwards of thirty different weapons, with most having custom attacks and stats. 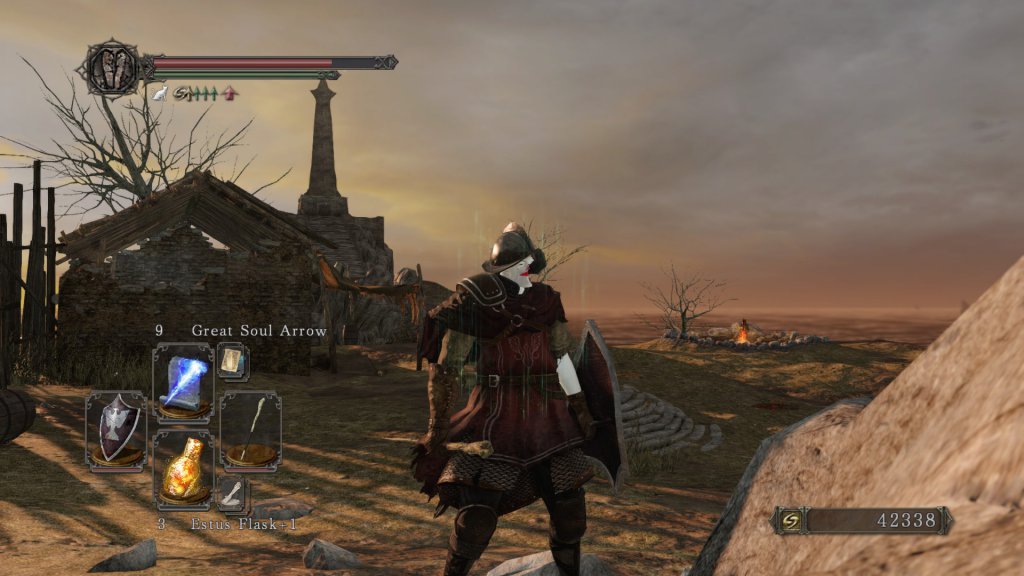 Playing this respecing game made weapon and armor modification much more viable. It was always this good, but was visually laid out in a way that caused some details to be apparently less important. Most of my gear from the previous entry was fire themed or blunted in a way that caused more damage. This entry throws a fire weapon at you quite early, so once you reach the blacksmith who can infuse weapons, you have some experience with the difference an element can make, and realisations like ‘maybe don’t use the fire weapon on the stoneman, and that the rawstone-infused axe might cause a more brutal swing’.

With the respec and the modifications systems in place, it’s relatively easy to change up your playstyle. A reliance on the respec is going to end in tears and rage, so versatility is key — find the build that lets you use more than three of your six weapon slots.

In all my years of playing this series, I’ve only played around with the Magic/Miracles/Hexes systems in the late game, because a reliance on emergency brute force in situations when an enemy surprises me was my usual reaction.

Pyromancy is basically cheating, in that it doesn’t require specific skill or stat combinations per spell, but that doesn’t mean it’s not fun — it’s just cheap, fun, easily replicated magic. I’m currently running around in Dark Souls II with a sceptre in one hand, lobbing magic arrows at royal swordsmen and knights, and it’s great. I get why people spend those precious points. 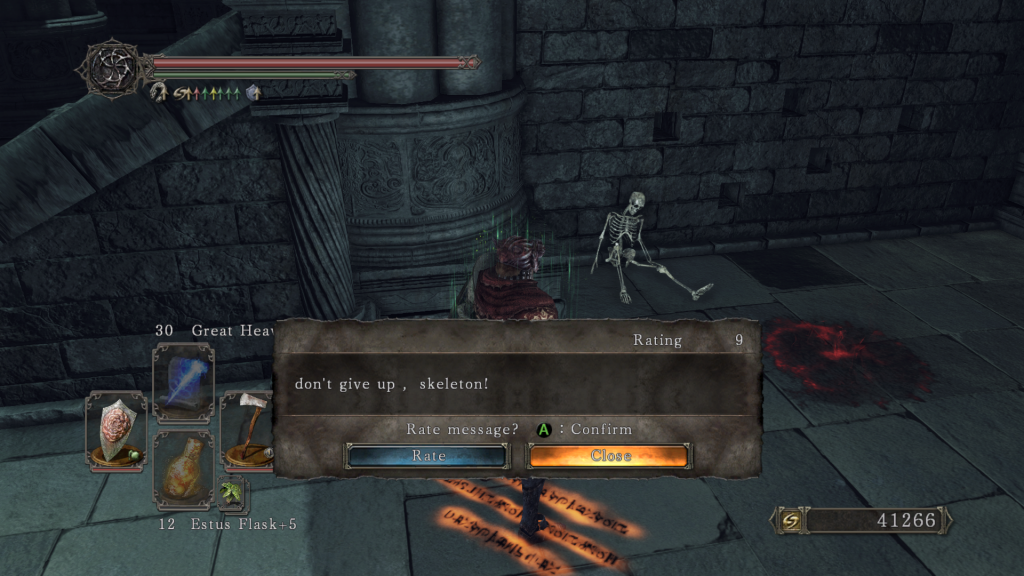 Dark Souls II introduced two in-game items called ‘Skeptic’s Spice’ and ‘Simpleton’s Spice’, which both lower the bar for each spell a point at a time. This has a secondary effect — other than the accessibility of those with low intellect and faith — in that those spells normally scale on the caster’s points in that attribute. As such, some spells are less powerful when cast by those with a lower multiplier.

The thing is, not all magic is offensive, nor is it defensive, and as such I’ve never had the necessary skillset to play around with things like Chameleon, which is very fun during invasions. Using this spell turns your avatar into a piece of scenery on the map, which has led to many great clips from PvP.

Due to the fact that each time you sit at a bonfire your limited spell uses are restored, along with the enemies you’ve just vanquished, this monotony of enemy respawns can be used as training dummies. This lets you farm some souls whilst getting to grips with your weapons and magic, leading directly onto my next point about the changes between games 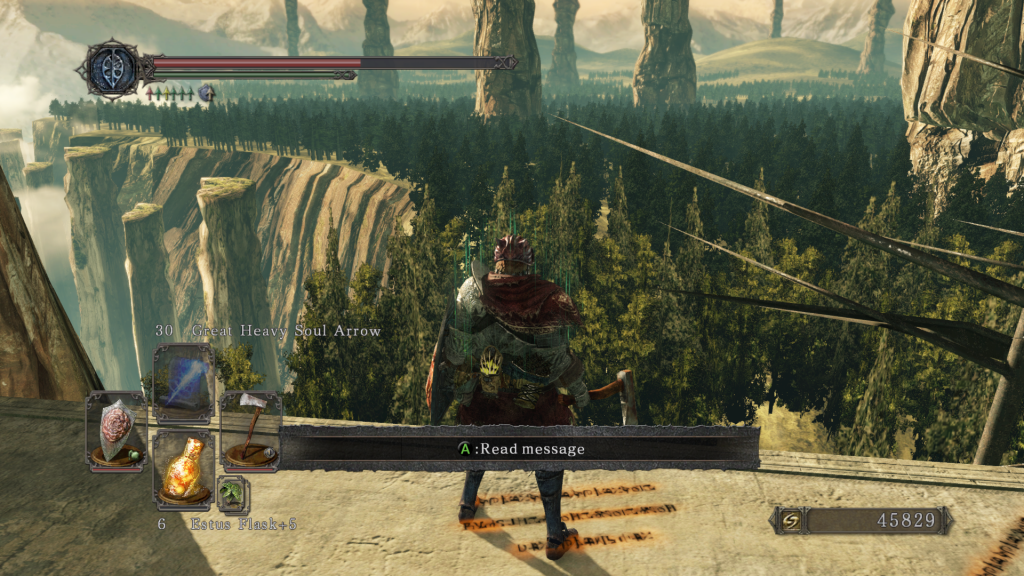 With Dark Souls II they changed how enemy spawns work. You can, if you really want to, fight an enemy twelve times, returning to a bonfire between fights, and on that return trip the enemy will no longer spawn. This is seemingly in order to stop people grinding out lower areas, whilst also allowing people to make the paths less hassle. This is a weirdly new, player-friendly system, and infuriated some people — as such there is a covenant you can join which bypasses this, and the system was entirely reverted for Dark Souls 3.

With the re-release of Dark Souls II, the developers decided to shuffle the enemy placement, which makes certain enemies’ lore much easier to parse while also making the game feel new again. A dragon from around mid to late game is just hanging around one of the starting areas, burning those who are cocky enough to run in unprepared. This whilst also being in an area housing two bosses, who each have descriptors tied to the dragons of the world.

These change-ups to the formula are enough to make the game feel fresh and fascinating, whilst not even acknowledging the three paid expansions they rolled into the re-release. Three mini-worlds I never ventured into, locations I’m preparing to conquer in the next few weeks, but have held off with until now. 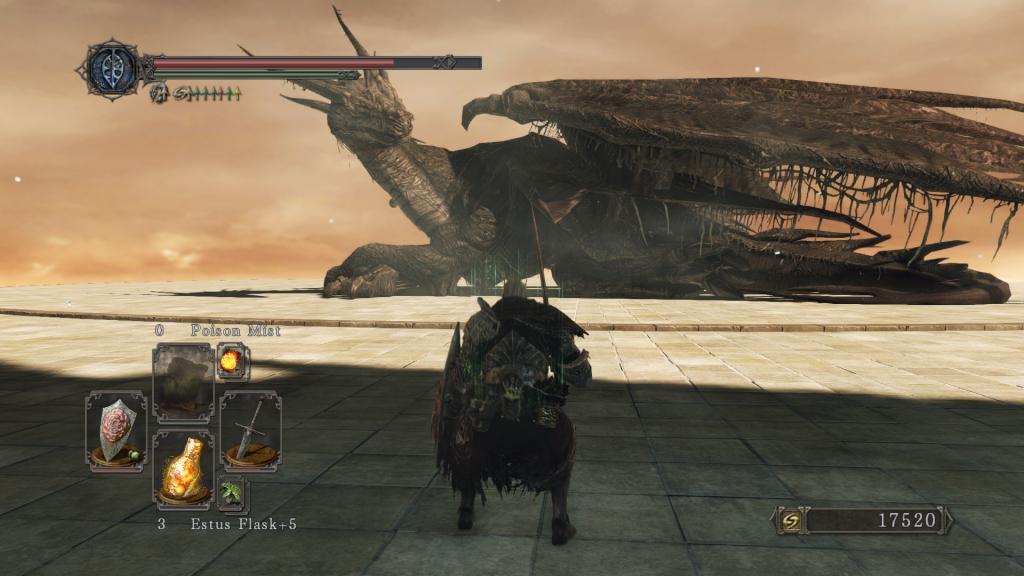 This game feels like the version I remember, which is factually inaccurate, but that doesn’t really matter in a game where characters are willing to sell their memory as to progress their goals. A game where people’s own sacrifices leave them unaware of the reason they set out, or even what they set out to save.. People remember where they came from, but not how and why they came — normally in pursuit of other people, who in most cases are amnesiacs solely related to that person and their shared relationship.

Someone has probably made a very heavy-handed analogy of Dark Souls II and dementia. These games are inherently lost in time, often in multiple senses. You can meet certain characters as living, undead and truly dead entities, and a character even goes on to  exist as a child in the late game.

The series gets away with playing around with time and location by not actually explicitly stating facts, merely by hinting and acknowledging resemblances. Early on in the game you get to meet Peter Serafinowicz, and he’s just sat there talking about what is definitely not a trap. He appears at least two more times in the game, and each time is coincidentally an ambush by other enemies — the game never says that he set up the traps, nor does it acknowledge that he is clearly a corpse-robber, but it’s either a fact or an eerie coincidence. 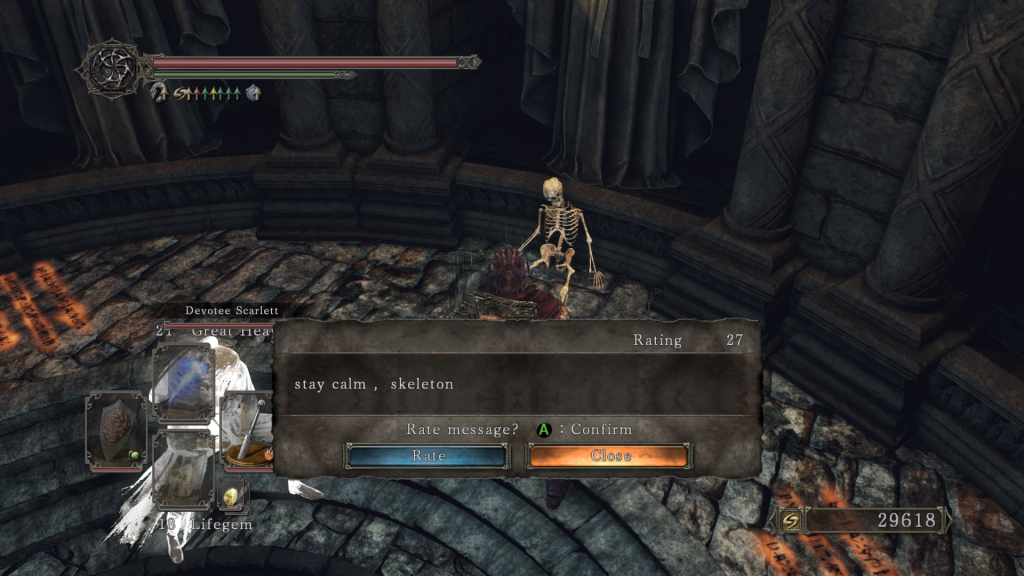 I’ve spent an easy two hundred hours playing Dark Souls 1–3, and each Souls game starts the same. They all gradually expand upon their world, but Dark Souls II started the in-game acknowledgement of some of the series repetition in a way which didn’t require players surrender their agency to an NPC who strong-arms the narrative.  The difference being that all choices in vanilla Dark Souls II led to the same ending, no matter the goal in mind.

Dark Souls is about repairing a car, Dark Souls II is about getting out of the car while also trying to sabotage the road and Dark Souls 3 is about destroying the world’s supply of tyres — or if you choose a different ending, investing in self-driving cars.

The best retro games for Halloween